When a woman conceals her sister’s death to claim their joint inheritance, her deception exposes a web of dangerous secrets in this addictive new thriller for fans of Megan Abbott, Gillian Flynn, and Paula Hawkins.

“Like most of the dead, I want to be remembered.”

Robin Voigt is dead. If Leslie had arrived at her sister’s cramped Las Vegas apartment just hours earlier, this would have been their first reunion in a decade. In the years since Robin ran away from home as a teenager, Leslie has stayed in New Mexico, taking care of their dying father even as she began building a family of her own. But when their father passed away, Leslie received a rude awakening: She and Robin would receive the inheritance he left them together—or not at all. Now her half of the money may be beyond her grasp. And unbeknownst to anyone, even her husband, Leslie needs it desperately.

When she meets a charismatic young woman who bears an uncanny resemblance to Robin—and has every reason to leave her past behind—the two make a reckless bargain: Mary will impersonate Robin for a week in exchange for Robin’s half of the cash. But neither realizes how high the stakes will become when Mary takes a dead woman’s name. Even as Mary begins to suspect Leslie is hiding something, and Leslie realizes the stranger living in her house, babysitting her newborn son, and charming her husband has secrets of her own, Robin’s wild, troubled legacy threatens to eclipse them both.

An electric, twisted portrait of sisterhood and the ties that bind, The Better Liar is a stunning debut with a heart-stopping, twist-after-twist finale that will beg the question: How far would you go to get what’s yours?

Praise for The Better Liar

“Jones’ sensational debut has the bones of a thriller but reads like literary fiction: lean, shrewd, and gratifyingly real.”—Entertainment Weekly

“Jones’s debut novel is clever, absorbing, and full of red herrings. . . . A stunning twist ending will leave readers waiting to see what Jones will give them next.”—Booklist (starred review)

An excerpt from The Better Liar

By the time I found her she was dead.

I groped for somewhere to sit down. The only place other than the bed, where the body lay, was a wooden dining-­room chair half-­buried under a pile of wrinkled clothes. It had a cushion hanging off the seat, patterned with cartoon bees, and as I moved to straighten it a cockroach, startled by the movement, hurried up the chair leg. I jerked my hand back and closed my eyes. Then I opened them again—­helplessly.

I didn’t want to look at the body. The body—­Robin—­Rachel. I’d never seen her as an adult, but as a teenager she’d been round-­faced, milk-­fed. Now she was so thin as to be impossible to look at. My vision unfocused itself when it encountered her ribs, visible through both the fabric of her runnin’ rebels T-­shirt and the sheet in which most of her body below the shoulders was tangled. Her hipbones, too, projected, cradling the vacant, starved abdomen.

A little vomit had dried in the corner of her mouth and on her tongue, the color of burned things. She had been unconscious when she’d choked on it.

Iker was panicking. “Should I call the police?” he said, directing his gaze at the close yellow walls, the popcorn ceiling. “I’m really sorry about this, I’m so sorry. I’ll call the police. I’ll call.” He wore a white polo with the logo of the housing company on it. Crescent-­shaped sweat stains gathered underneath his sagging pectoral muscles, like a pair of closed eyes. They twitched as he began digging in the pockets of his khaki pants for his cellphone.

He went down the stairs into the living room below, taking his proprietor’s key but leaving the door ajar. After a minute I could hear him shuffling on the front porch, audible through the mosquito screen on the open window.

She was still on the bed. The fact of her was as sweltering as the room.

In my imagination I reached for my phone. In another version, I didn’t. I lived these two visions simultaneously for several long minutes, my hand twitching in the air above my purse, unable to choose between them.

If I called the police, then Robin would be dead—­absolutely dead. Legally, governmentally dead. I would have to identify her, and arrange somehow to take her body back to Albuquerque to be buried, and have a funeral, and then everyone would know she was dead and it would be over.

I could contest, maybe—­but contesting could take a year or more. I couldn’t wait a year. If I didn’t call the police, then she would still be dead, but—­

I took her wallet off the dresser and looked at her ID. “Rachel Vreeland” stared out at me from the hypersaturated photograph. She’d been pretty as an adult, the pale skin I remembered from childhood turned slightly orange by the sun or the DMV’s printer. 5’-­09”, the text next to her face said. Eyes: BRO.

Her real name wasn’t anywhere in the wallet, or anywhere in the rest of the room. She had a lot of stuff, but most of it was clothes, strewn across the floor and piled in the closet. I picked through the items with pockets, careful of cockroaches, but turned up only old movie tickets and gas-­station receipts. The walls were covered in movie posters and a corkboard with photographs of friends with red Solo cups, a scruffy orange cat, a long-­lost boyfriend from whenever the last time was she was weighty enough to crush to his side while he held the camera out in front of them. The dresser drawers held dozens of bottles of disintegrating nail polish and depleted pans of eye shadow. At least fifty pairs of underwear, which I pushed aside with a clothes hanger, scraping the bottom of the drawer: nothing underneath.

I shook out each of her shoes next—­cowboy boots, Toms, slip-­on sneakers—­turning the left and then the right upside down.

Something fell out of the right one. I’d been expecting Robin’s real ID, or maybe a baggie, so the anticlimax startled me: a pair of pearl earrings, so light that they made barely any noise against the carpeted floor. For a moment I thought they must be insects, moths, alive inside Robin’s shoes, and their brief bouncing trajectory across the floor was translated by my gaze as mad, frenzied flapping; then I blinked, and they resolved into dead objects.

It took me several seconds to realize why I was staring at them. When it came to me I snatched them up so quickly that my fingernails scraped the carpet. My mother’s earrings. Five-­pointed, like stars, each seed grasped by a minuscule gold claw. I hadn’t seen them since I was a little girl. I suppose I thought they’d been buried with her, or my father had sold them. But here they were in Robin’s cramped rented room in Las Vegas.

Had Daddy given them to her and never told me?

He wouldn’t have done that. She didn’t deserve them. I was the one who’d made his doctors’ appointments, helped him swallow, taken him to the movies every Sunday. Robin had done nothing but call occasionally, after she turned sixteen and disappeared.

He hadn’t given them to her. Probably she’d stolen them the night she left. She’d taken forty dollars out of my purse that night too.

I rubbed my thumb along the surface of the pearls, feeling several faint scratches on the curvature of one of the seeds, invisible to the eye but evident to the touch. Pearls were easily scratched. My grandmother had taught us to polish her pearl jewelry with olive oil and a chamois cloth, pushing our cloth-­covered fingernails into the crevices where each pearl was secured. But Robin was careless.

I closed my fingers around the earrings. The backings dug into my palm like children’s teeth. If I didn’t call the police, Robin Voigt could stay Rachel Vreeland. Rachel Vreeland could have a crappy City of Las Vegas burial, a heroin addict with no family, the person she had chosen to be when she was sixteen. It gave me a thick, sick pleasure to think about. I wanted her to be alone in the ground.

But it wouldn’t matter. Either way, I couldn’t get what I needed from her.

She would have loved that.

I had been in the room with her body for almost five minutes now. The pacing on the porch had stopped; Iker was considering whether to come back upstairs for me.

There was a series of faint rusty creaks as someone else came up the second set of stairs, which clung to the siding on the rear of the house, allowing access to the upper floor from the backyard. Whoever had come in went into the second bedroom and slammed the door.

Her roommate. Yes. Iker had said there was another tenant.

I heard the muffled noises of quick movement from the second bedroom. The roommate could come into the hall at any moment and see me—­see Robin’s body—­wonder where the police were, who I was, why Iker hadn’t called—­

I didn’t reach for my phone. I slipped the earrings into my purse and walked quickly toward the back door. I was out before anyone saw me, making as little sound as I could manage on the metal stairs.

At the noise of the ignition, Iker ran back out onto the front porch, waving his arm at me to stop. He shouted something after me, something I couldn’t hear as I drove away.

Tanen Jones grew up in Texas and North Carolina. She has a degree in American history and spent several years editing law and criminal justice textbooks. A queer author, she writes about queer women in dark spaces. Tanen now lives in New York with her partner, where she writes to the sound of her neighbor’s piano. The Better Liar is her debut novel. 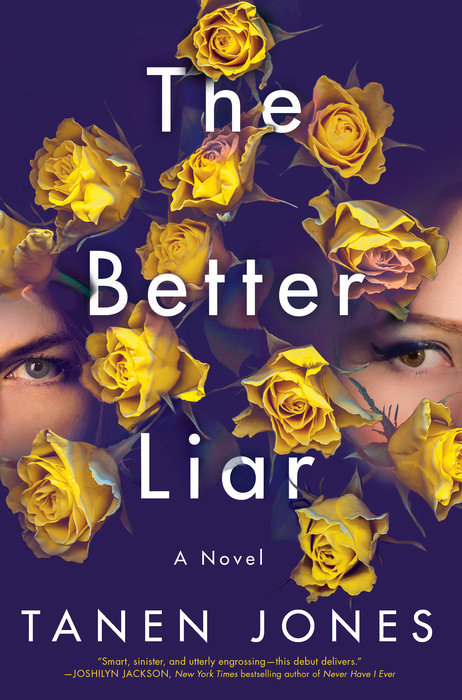