New York Times bestselling author Kevin Hearne returns to the world of his beloved Iron Druid Chronicles in a spin-off series about an eccentric master of rare magic solving an uncanny mystery in Scotland.

“A terrific kick-off of a new, action-packed, enchantingly fun series.”—Booklist

Al MacBharrais is both blessed and cursed. He is blessed with an extraordinary white moustache, an appreciation for craft cocktails—and a most unique magical talent. He can cast spells with magically enchanted ink and he uses his gifts to protect our world from rogue minions of various pantheons, especially the Fae.

But he is also cursed. Anyone who hears his voice will begin to feel an inexplicable hatred for Al, so he can only communicate through the written word or speech apps. And his apprentices keep dying in peculiar freak accidents. As his personal life crumbles around him, he devotes his life to his work, all the while trying to crack the secret of his curse.

But when his latest apprentice, Gordie, turns up dead in his Glasgow flat, Al discovers evidence that Gordie was living a secret life of crime. Now Al is forced to play detective—while avoiding actual detectives who are wondering why death seems to always follow Al. Investigating his apprentice’s death will take him through Scotland’s magical underworld, and he’ll need the help of a mischievous hobgoblin if he’s to survive.

An excerpt from Ink & Sigil

Scones Should Come with a Warning

Deid apprentices tend to tarnish a man’s reputation after a while. I’m beginning to wonder when mine will be beyond repair.

Fergus was crushed by a poorly tossed caber at the Highland Games.

Beatrice was an amateur mycologist and swallowed poison mushrooms.

Ramsey was run over by American tourists driving on the wrong bloody side of the road.

Nigel went to Toronto on holiday and got his skull cracked by a hockey puck.

Alice was stabbed in a spot of bother with some football hooligans.

And now Gordie, who was supposed to be my lucky number seven, choked to death on a scone this morning. It had raisins in it, so that was bloody daft, as raisins are ill-omened abominations and he should have known better. Regardless of their ingredients, one should never eat a scone alone. Poor wee man.

None of their deaths was my fault, and they were completely unrelated to their training in my discipline, so that’s in my favor, at least. But still. People are starting to wonder if I’m capable of training a successor.

I’m starting to wonder too. And I’d like to have a successor soon, as I’m past sixty and rather wishing I could spend my time on sunny beaches, or in sunny gardens, or indeed anyplace where I might see the sun more often.

Scotland is not known for its sunshine. The Highlands get two hundred sixty days of rain per year. But it’s no fun for people in other countries to think of us as perpetually drenched, so I believe the popular imagination has painted us with kilts and bagpipes and unfortunate cuisine.

The muscle-bound constable standing outside Gordie’s flat in Maryhill and doing a fair job of blocking the entrance held up a hand as I moved to step around him and reach for the door. He was in no mood to give me a polite redirection. “The f*** ye daein’, bampot? Away an’ shite,” he said.

“Ram it up yer farter, Constable. Inspector knows I’m comin’, so get out ma way.”

Oh, yes, and colorful language. Scotland’s reputation for that is well deserved.

My cane is in fact a weapon that a person of my age is allowed to carry around openly, but I pretended to lean on it as I pulled out my “official ID” and flashed it at him. It was not a badge or anything truly official but rather a piece of goatskin parchment on which I had written three sigils with carefully prepared inks. Any one of them alone would probably work, but in combination they were practically guaranteed to hack the brain through the ocular nerve and get me my way. Most people are susceptible to manipulation through visual media—ask anyone in advertising. Sigils take advantage of this collective vulnerability far more potently.

The first one, Sigil of Porous Mind, was the most important, as it leached away the target’s certainties and priorities and made them open to suggestion. It also made it difficult for the target to remember anything that happened in the next few minutes. The next one, Sigil of Certain Authority, applied to me, granting my personage whatever importance the constable’s mind would plausibly accept. The third, Sigil of Quick Compliance, should goad him to agree to almost any reasonable order I gave next and make him feel good about it, giving him a hit of dopamine.

“Right ye are, sir,” he said, and smartly stepped to the side. There was plenty of room for me to enter now without contact and no need to say anything more. But he’d been a tad rude and I believed it deserved a proportional response, so I shouldered past him and muttered, “I pumpt yer gran.” He flashed a glare at me but said nothing, and then I was in the flat.

The inspector inside did not, in fact, know I was coming. She was middle-aged and looked a bit tired when she swung around at my entrance, but she was a good deal more polite than the constable. She had decided to let her hair go grey instead of dying it, and I liked her immediately for the decision.

There was a forensics tech of indeterminate gender taking digital pictures and ignoring both of us, an actual camera pressed to their face instead of a phone or a tablet extended toward the victim. I deployed the official ID once more and gestured at the body of poor Gordie, blue in the face and sprawled on his kitchen floor. Years of training, his hopes and mine, all spread out and lifeless. “Tell me what ye know about the man’s death.”

The inspector blinked rapidly as the sigils did their work and then replied, “Neighbor in the flat downstairs called it in because the victim fell pretty heavily and pounded on the floor—or the neighbor’s ceiling—a few times before dying. A choking accident, as far as we can tell, unless the tox screen comes back and tells us there was something wrong with the scone.”

“Of course there was something wrong,” I said, looking at the half-eaten remainder sitting on a small saucer. “It had raisins in it. Anything else of note?”

She pointed toward the hallway. “Two bedrooms, but he lived alone. One bedroom is full of fountain pens and inks. Never seen the like. Bit of a nutter.”

“Right. That’s why I’m here. I need to send that stuff in for testing n’ that.”

The inspector’s features clouded with confusion. “He didnae drink any of it.”

“No, no. This is part of a different investigation. We’ve been watching him for a while.”

“Thanks. And you’re investigating his inks?”

“On ye go, then. I didnae like that room. Felt strange in there.”

That idle comment was a huge warning. Gordie must have had some active and unsecured sigils inside. And all his inks—painstakingly, laboriously crafted with rare ingredients and latent magical power—had to be removed. The last thing the world needed was some constable accidentally doodling his way to a Sigil of Unchained Destruction. I’d secure them and preserve them for later analysis, keeping the successful decoctions and viable ingredients, and destroying the rest.

I turned without another word and went to the hallway. There were three doors, one presumably being the loo. Layout suggested that was the first door on my left, so I went to the second and cautiously cracked it open. It was his bedroom, and there was a desk as well with a small collection of pens, inks, and papers—all for normal correspondence. I snatched a sheet of stationery and selected an Aurora 88 pen from my coat pocket. It was presently filled with a rust-colored ink using cinnabar for the pigment and a varnish infused with ground pearls, fish glue, and the vitreous jelly of owl eyes. I drew a small circle first to direct the effect at myself, then carefully but quickly outlined the shapes of the Sigil of Warded Sight, which looked like a red eye, barred and banded over with simple knotwork. Once completed, the sigil activated and my sight changed to black and white, all color receptors dormant. It was the most basic defense against unsecured sigils: I could not be affected by them until this one wore off—or until I destroyed it myself. It had saved me too many injuries to count.

Putting the pen away and hefting my cane defensively, I kept the sigil in my left hand and crossed the hall to open the door to Gordie’s study. A waft of foul, funky air immediately punched me in the nose, and I wondered why the inspector hadn’t said anything about it before. It smelled like a sweaty scrotum. Or maybe ten of them.

“Gah,” I said, and coughed a couple of times to clear my lungs. I heard titters coming from the kitchen and realized the inspector had left out that fact on purpose. No wonder she’d told me to have at it. Her politeness had been a ruse to draw me to an olfactory ambush.

But I’d been wise to guard my vision. Gordie had far more than a few sigils lying around. The room was full of them, warding against this and that. The walls were lined with raw wooden workbenches and chairs, and cubbyholes full of labeled inks and ingredients glinted on the left. The main bench for ink preparation was opposite the door, and it was stained with pigments and oils and binders and held stoppered bottles of yet more inks. There was also a labeled rack of fountain pens and trays of paper and cards for sigils, along with sealing wax, a melting spoon, and a box of matches. Several cards pasted on the wall above the workbench had recognizable sigils on them for selective sight and attention that should make me—or anyone else who entered—completely ignore what was on the right side of the room. That’s why the detective inspector had felt so uncomfortable. She felt something was going on in there and most likely saw it, but the sigils wouldn’t let her mind process it. My warded sight made the sigils ineffective, so I had no difficulty seeing that there was a hobgoblin grunting and straining to work his way out of a cage placed on top of the workbench. That was a sight I never thought I’d see. 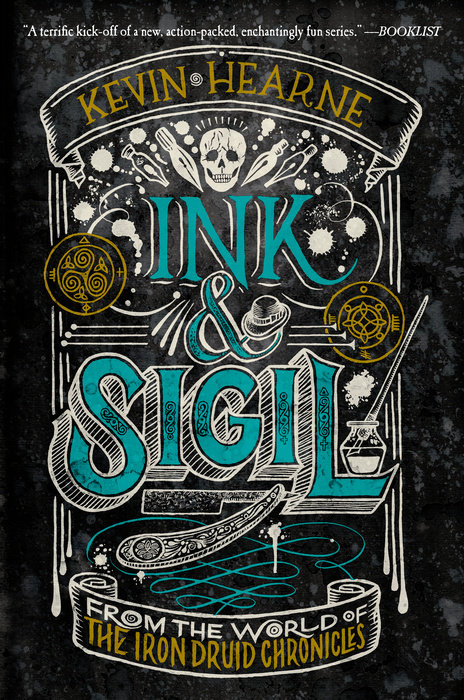