After solving a murder at a local restaurant, Quinn Bellandini just wants to get back to her comfortable life running her grandfather’s B&B in Savannah, Georgia, with her sister, Delilah. But those plans get buried when Quinn and her new boyfriend, Tucker Heyward, dig up an old skeleton while doing some landscaping in his aunt Lela’s backyard. Before long, Lela becomes the prime suspect in the thirty-three-year-old unsolved murder of a high school homecoming queen.

Tucker is devastated. But Quinn’s conscience won’t let her risk an elderly woman spending her twilight years in jail for a crime she didn’t commit. And Delilah, bored by the quiet B&B biz, has been itching to do some more investigating of her own.

Soon they’re questioning a growing list of suspects, from nosy neighbors and snooty Savannah socialites to mild-mannered teachers and old high-school friends of the victim—including Quinn and Delilah’s own parents. But no one is safe from a killer who’s totally old school.

And don’t miss Caroline Fardig’s thrilling Java Jive mysteries, which can be read together or separately:
DEATH BEFORE DECAF | MUG SHOT | A WHOLE LATTE MURDER | BREW OR DIE | MURDER OVER MOCHAS

An excerpt from Southern Harm

“Whew! If I’d known it was going to be this hot today, I might have fibbed and told you I had other plans.”

I took out my dearly departed Grandmama Hattie’s lace handkerchief, a handy keepsake I always carried with me, to mop the beads of perspiration trickling down my brow. Today was unseasonably warm for mid-December in Savannah. The high had already reached seventy-five degrees, and it was barely past noon. Born and raised in the sultry Lowcountry, I spent most of my springs, summers, and falls battling the heat. I’d given up hope of a white Christmas long ago, but shouldn’t the joy of the holiday season inspire Mother Nature to offer us a reprieve from our near-constant sweating?

My boyfriend, Tucker Heyward, stopped digging in the yard and squinted at me with a smile. “Hold on a minute, there. The Quinn Bellandini I know doesn’t fib. It would be impolite.” After giving me a playful wink, he rammed the business end of his shovel into the ground and bent over to pluck a tiny object out of the dirt. “Did you drop this?” He held out his hand and placed the item into mine.

Between the heat and my outdoor exertion, my glasses were fogging up something awful. I pushed them up on top of my head and peered at the object in my hand. It was a gold heart-shaped locket necklace caked with dirt.

“Nope, it’s not mine. Looks like it’s been here awhile. Your aunt’s, maybe?”

He took my hand in his to take a closer look at the necklace. “I’ll ask her. While I’m inside, I’ll grab us some water.” Giving me a squeeze, he slipped the locket from my hand and headed toward the house.

I watched Tucker disappear through the back door of his aunt’s home, thankful he couldn’t see the blush tingeing my cheeks. Tucker never passed up an opportunity to hold my hand, not that I minded. Our relationship was still quite new—we’d only been dating for two months. We were still getting to know each other.

The reason I was out here all hot and bothered was that I’d offered to help him construct his Christmas gift to his aunt Lela. She enjoyed reading and stargazing in her picturesque backyard in the evenings. But during the winter (that was, when we weren’t having a hot spell), it got too chilly for her. Tucker, who was a contractor by trade, dreamed up the perfect solution to her problem—an in-ground fire pit.

Glancing across the yard, I surveyed our progress. We hadn’t gotten very far, having spent a great deal of our time talking and flirting. We were both pretty talkative, so we tended to get sidetracked if we tried to accomplish a task and have a conversation at the same time. In the time we’d actually spent working today, we’d managed to stake out the section we wanted to dig up for the future fire pit and surrounding flagstone patio, and we’d removed most of the sod from the ground. The deeper digging for the pit itself would be next.

I picked up Tucker’s shovel and began heaving mounds of dirt out of the earth. On my third dig, the shovel stopped short. I’d hit something hard. Buried treasure, perhaps? I chuckled to myself at the thought of it. Back in the day, Savannah was a hotbed for honest-to-goodness pirates. They shanghaied able-bodied men right off the streets and spirited them away to become their unwilling crew. Or so the stories go. Tourists to our area seem to love the idea of underground tunnels and swashbucklers, and they’re especially excited by the chance of catching a glimpse of one of the legion of ghosts said to haunt our fair city. Being part of the tourist trade myself (my sister and I managed our family’s bed-and-breakfast hotel), I admittedly perpetuated the intriguing, though not always terribly factually accurate, local folklore. Savannah’s storied history is just as appealing as her unmistakable Southern charm.

I tapped the hard object with the shovel blade and scraped it to remove the remaining layer of dirt. It was white and roundish—yet another rock we’d have to unearth and cart away. Boring! I’d been hoping for pirate booty.

I skimmed around the sides of the rock with the tip of the shovel blade. The more I uncovered, the less it looked like a rock and more like . . .

“Tucker!” I cried, dropping the shovel like it was hot and stumbling backward away from the hole. “Tucker!”

Tucker came bounding out of the house, concern etched on his face. “Are you hurt? What happened?”

I pointed a shaking finger at the hole I’d dug. I kept my eyes trained on Tucker, unwilling to look in the direction I was gesturing. “There’s something . . . Some—” I choked out a sob. “Someone.”

“What? Is it a dog or a cat that you found? I know my aunt and uncle buried several family pets out here.”

I shook my head, eyes filling with tears.

His tanned face went pale as he stared in the direction of the hole. “Quinn, are you trying to say there’s a person in the ground where we were digging?”

“Um . . . You look,” I whispered, hoping the sun beating down had suddenly given me a heatstroke and I was imagining things. Maybe it was indeed an animal skull . . . that was the completely wrong size and shape.

He gave my shoulder an encouraging pat as he passed me, walking slowly toward the hole. Crouching down where I’d been standing, he used his hands to dig some of the dirt aside. He stopped and went still, his attention trained on the ground. After what seemed like an eternity, he stood and turned toward me. His handsome face was grim.

My stomach lurched. This couldn’t be happening. Again. I squeezed my eyes shut and willed myself to wake from this nightmare.

Aunt Lela appeared in the back doorway. “What’s all the ruckus about?”

I opened my eyes and stared at Tucker, a stricken expression on my face. How did you tell an old lady that there was a body buried in her backyard without giving her a heart attack? My thirty-year-old heart was pounding uncontrollably.

Tucker said evenly, “Uh, Aunt Lela . . . we’ve found some . . . bones out here while we were digging. I’m afraid the fire pit project may have to be put on hold. Indefinitely.”

Taking a drag from her cigarette, she said in her gravelly voice, “If it’s the remains of that smelly old hunting dog of your uncle’s, you’re welcome to dig that thing up and toss it in the garbage. Nasty mutt, that one. Bit me twice. I would have killed it myself if my idiot ex-husband hadn’t mistaken it for a turkey and shot it.” She cackled until she descended into a coughing fit.

Then again, maybe we wouldn’t have to sugarcoat the truth for her. Aunt Lela wasn’t your typical simpering Southern belle. She was one tough old bird, and the colorful language she often used could make a scurvy pirate blush.

Tucker shook his head. “I’m afraid these bones seem to be human.”

She froze. “Human, you say? I’ll be right back.” She disappeared into her house.

Tucker came over to wrap his arms around me. “Are you going to be okay?”

I struggled not to let myself break down in the comfort of his embrace. “I think so.”

“I can’t believe this happened to you again, Quinn. I wish it had been me.”

As sweet as his words were, I couldn’t expend any of my energy getting gooey over what a great guy he was. It was taking everything I had to hold it together. And if this time was going to turn out anything like the last time I’d stumbled onto a dead body, I was going to need every ounce of energy I could muster.

Aunt Lela returned, holding the dirt-caked necklace Tucker had found a few minutes earlier. Her arthritic hands fumbled to open the locket. She sucked in a gasp when the heart popped open and she zeroed in on its contents. The lit cigarette that had been dangling precariously from her lips dropped to the ground at her feet. She let out a string of curses I could never in a million years repeat.

“I think y’all may have found my missing neighbor girl.”

He wrinkled his brow. “I don’t remember ever hearing about that. When did you have a neighbor who went missing?”

Caroline Fardig is the USA Today bestselling author of more than a dozen mysteries. Fardig’s Bad Medicine was named one of the best books of the year by Suspense Magazine. She worked as a schoolteacher, church organist, insurance agent, funeral parlor associate, and stay-at-home mom before she realized that she wanted to be a writer when she grew up. Born and raised in a small town in Indiana, Fardig still lives in that same town with an understanding husband, two sweet kids, two energetic dogs, and one malevolent cat. 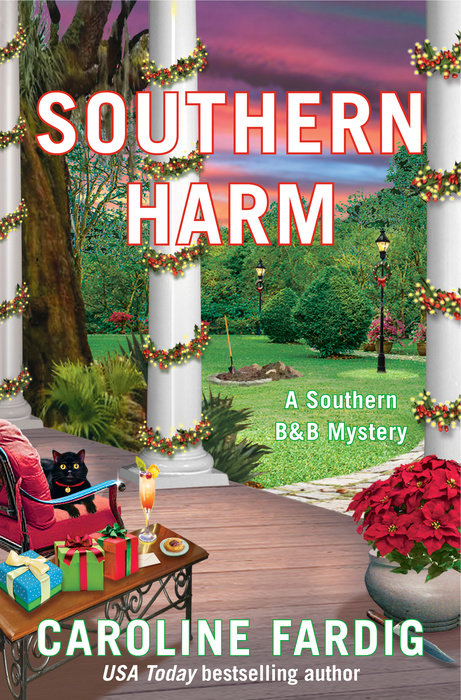