“A perfect novel for these times and all times, the single textual artifact from the pandemic era I would place in a time capsule as a representation of all that is good and true and beautiful about literature.”—Molly Young, The New York Times

Eight friends, one country house, and six months in isolation—a novel about love, friendship, family, and betrayal hailed as a “virtuoso performance” (USA Today) and “an homage to Chekhov with four romances and a finale that will break your heart” (The Washington Post)

In the rolling hills of upstate New York, a group of friends and friends-of-friends gathers in a country house to wait out the pandemic. Over the next six months, new friendships and romances will take hold, while old betrayals will emerge, forcing each character to reevaluate whom they love and what matters most. The unlikely cast of characters includes a Russian-born novelist; his Russian-born psychiatrist wife; their precocious child obsessed with K-pop; a struggling Indian American writer; a wildly successful Korean American app developer; a global dandy with three passports; a Southern flamethrower of an essayist; and a movie star, the Actor, whose arrival upsets the equilibrium of this chosen family. Both elegiac and very, very funny, Our Country Friends is the most ambitious book yet by the author of the beloved bestseller Super Sad True Love Story.

An excerpt from Our Country Friends

The House on the Hill was in a tizzy.

Workmen’s trucks streamed up the long gravel driveway. Two sets of plumbers from both sides of the river had been summoned to dewinterize the five bungalows behind the main house, and they did not care for one another. A broken set of windows in one bungalow had to be replaced posthaste, and a family of field mice had chewed through the electrical cable powering another. The handyman, who did not live on the property, was so overwhelmed by the state of affairs, he retreated to the extensive covered porch to eat a cheese sandwich in long deliberative bites. The mistress of the house, Masha, had lowered the shades in her first-floor office to escape the cacophony of modern tools and loud country cursing. At times, she would peek out to note the surfaces that would have to be wiped down after the workmen left. Natasha (who liked to go by Nat), her eight-year-old daughter, was upstairs, illuminated by a screen in the darkness of her room, in a lonely public world of her own.

The only happy member of the household was Alexander Borisovich Senderovsky, known as Sasha to his friends. “Happy,” we should say, with an asterisk. He was agitated as well as excited. A windstorm had brought down the heavy branches of two dead trees flanking the driveway, scattering the vast front lawn with their dead white rot. Senderovsky liked to expound at length upon the “entropic” nature of his estate, the way all manner of growth was allowed to go its own way, sumacs elbowing out more well-heeled plants, ivy poisoning the perimeter, groundhogs bringing destruction upon the gardens. But the scattering of dead tree limbs made the House on the Hill look apocalyptic, the very thing Senderovsky’s guests were coming up to escape. The handyman claimed a bad back and was not handy enough to remove all the tree limbs on his own, and the so-called tree guy had gone missing. Senderovsky, in his athletic pants and wildly colored dressing gown, had tried to move one of these prehistoric-looking branches himself, but the very first heave made him fear a hernia.

“Ah, the hell with it,” he said, and got into his car. A word about the car. Well, not so much about the car, as the way in which it was driven. Senderovsky had only learned to drive three years ago, at the milestone age of forty-five, and only within the limits of a country setting. The highway on the other side of the river unsettled him. He was a fiercely awful driver. The half-empty local roads inspired him to “gun” the engine of his sturdy but inflexible Swedish automobile, and he saw the yellow stripes bisecting the roads as suggestions meant for “less experienced drivers,” whoever that might be. Because he did not believe in road marks or certain aspects of relativity, the concept of a blind curve continued to elude him. (His wife no longer allowed him to drive with their child onboard.) What was worse, he had somewhere picked up the phrase “tooling around.”

And now Senderovsky raced to his errands, mindful only of the speed traps, set with boring predictability on the frayed edges of towns or the school zones, where the fines could be doubled. First, he visited his butchers, two former catalog models from the city, now a husband and wife, who plied their trade out of a barn so red it verged on the patriotic. The two magnificent twenty-five-year-olds, all teeth and coveralls, presented him with a wrapped parcel of sweet and Italian sausages, glistening hamburger patties, and his secret weapon: lamb steaks that clung to the bone, so fresh they could only have been rivaled by a restaurant Senderovsky admired in Rome’s abattoir district. The very sight of meat for tomorrow’s cookout inspired in him a joy that in a younger man could be called love. Not because of the meat itself, but because of the conversations that would flow around it as it was marinated, grilled, and served, despite the growing restrictions on such closeness. By noon tomorrow, his best friends, the ones who had been so hard to bring together during previous summers, would finally unite, brought together by the kernels of a growing tragedy to be sure, but brought together nonetheless, in his favorite place on earth, the House on the Hill.

Of course, someone else was coming, too. Someone who was not a friend. Someone who made Senderovsky, already a drinker, drink more.

With that in mind, he sped to the liquor store in the richest village in the district, which occupied the premises of a former church. He bought two cases of Austrian Riesling at the south transept, another of rosé at the north, along with a third case of Beaujolais, wildly out of season, but a nostalgic wine for him and his high-school friends, Vinod and Karen. Ed, as always, would be the hardest to accommodate. Deep in the sacristy, Senderovsky picked out an eighteen-year-old bottle of something beyond his means, two bottles each of cognac and rye, and, to show his frivolous side, schnapps and a strange single malt from the Tyrol. The proprietor, a shaggy Anglo with a rosacea nose peeking out from his loosely worn mask, looked very pleased as he rang up the many purchases, his fingers clad in black disposable gloves.

“Just got a call from the state,” he said to Senderovsky. “They might shut me down any day now as nonessential.” Senderovsky sighed and bought an extra case of the Riesling and two bottles of an artisanal gin he had never heard of. He could picture Ed pursing his lips around a glass and pronouncing it “drinkable.” When the final bill, adding up to just over four digits, meandered out of the machine in many long spurts, Senderovsky’s hand could barely slalom through his signature. A special occasion, he consoled himself.

With his trunk now filled with bottles as well as meats, he gunned his car toward yet another village, this one fifteen miles north, to do some more marketing, after which he was due to drop off the meat and pick up Ed from the train station. At the exit for the bridge crossing the river, he ran into a line of cars. Nothing irritated Senderovsky more than the local version of a traffic jam. He brought a city impatience to the rural life. Around here it was considered impolite to honk, but Senderovsky honked. He rolled down his window, thrust out his long bony face, and honked some more with the palm of his hand, the way he had seen men do in films. The car in front of him was not moving. It sat low to the ground, a rusted wheelbarrow jammed into its trunk, a national flag fluttering from the driver’s window, and a partly peeled sticker on the bumper that read i stand by my pres . . . Senderovsky realized that at this pace there was no way he could go to the store and drop off the meat before Ed’s train arrived. Ignoring the very clear markings on the road warning against just such a maneuver, he whipsawed his car around, and within minutes was charging up his long driveway, once again cursing the fallen tree branches that ruined the approach to the House on the Hill. As he noisily threw the meat into the industrial-sized freezer in the vast white kitchen (the house had once belonged to a chef), he dialed the boy from across the river who came round to do the lawn mowing, begging him to get rid of the branches. But the boy had other things to do. “What things?” Senderovsky challenged, threatening to pay double. Out on the covered porch he confronted the handyman who was listening to old music on a handsome red radio, but all he got was “The missus told me I wasn’t to move anything heavy on account of the back.”

Senderovsky’s own missus now stepped onto the porch in her kaftan, arms akimbo, her fingers pressed into the softness of her abdomen. “I can’t work with all this noise,” Masha said in Russian to her husband, mindful of the handyman. “It’s a workday for me. My patients can barely hear me and they’re agitated as it is.”

“There’s drilling by the bungalows, and you’re throwing meat in the freezer and yelling at the lawn boy.”

“Darling,” Senderovsky answered, using an inflated diminutive of the term: dorogushka. He had known his wife since they were children. Russian was a language built around the exhalation of warmth and pain, but lately Senderovsky had found his declarations of love for his wife stilted, as if he were reading them from a play. “The workers will knock off at three, as they always do,” he said. “And I’ve only to pick up Ed and get the groceries.”

The handyman stared at them for the aliens they were. When he had started working for them three years ago, they were of approximate size, two smallish figures, college professors most likely (a tiny but very active college was within striking range of Senderovsky’s car), annoying in their requests and frugal in their outlays, but speaking with one slightly accented city voice. Now the woman had become larger, more local-looking around the waist and arms, while the man had done the opposite, had shrunk and emaciated himself and lost most of his hair, his only salient points a sharp nose and the brick of a forehead, to the point that the handyman suspected he was ill. In another reversal, the husband seemed happier today, despite the seeping sibilants of the language they spoke, while she had taken on his former briskness. Whatever this weekend would bring, the handyman thought, it would not be good.

Gary Shteyngart is the New York Times bestselling author of the memoir Little Failure (a National Book Critics Circle Award finalist) and the novels Super Sad True Love Story (winner of the Bollinger Everyman Wodehouse Prize), Absurdistan, and The Russian Debutante’s Handbook (winner of the Stephen Crane Award for First Fiction and the National Jewish Book Award for Fiction). His books regularly appear on best-of lists around the world and have been published in thirty countries.

To inquire about booking Gary Shteyngart for a speaking engagement, please contact the Penguin Random House Speakers Bureau at speakers@penguinrandomhouse.com. 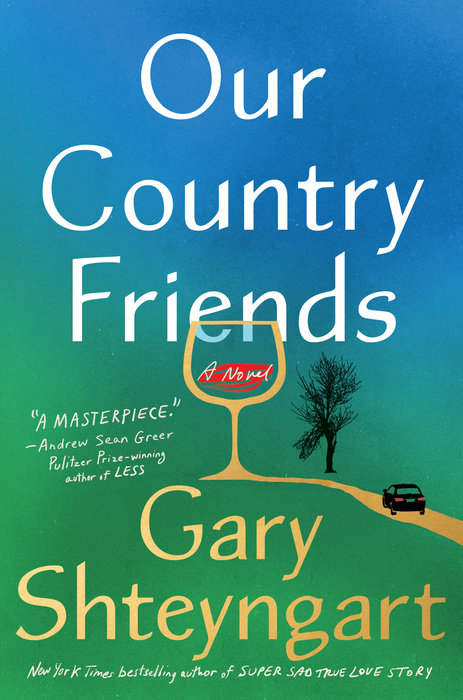