From the #1 New York Times bestselling author of Before We Were Yours comes a new historical novel: the dramatic story of three young women searching for family amid the destruction of the post–Civil War South, and of a modern-day teacher who learns of their story and its vital connection to her students’ lives.

Bestselling author Lisa Wingate brings to life startling stories from actual “Lost Friends” advertisements that appeared in Southern newspapers after the Civil War, as newly freed slaves desperately searched for loved ones who had been sold away.

Louisiana, 1875: In the tumultuous era of Reconstruction, three young women set off as unwilling companions on a perilous quest: Hannie, a freed slave; Lavinia, the pampered heir to a now destitute plantation; and Juneau Jane, Lavinia’s Creole half sister. Each carries private wounds and powerful secrets as they head for Texas, following roads rife with vigilantes and soldiers still fighting a war lost a decade before. For Lavinia and Juneau Jane, the journey is one of stolen inheritance and financial desperation, but for Hannie, torn from her mother and siblings before slavery’s end, the pilgrimage west reignites an agonizing question: Could her long-lost family still be out there? Beyond the swamps lie the limitless frontiers of Texas and, improbably, hope.

Louisiana, 1987: For first-year teacher Benedetta Silva, a subsidized job at a poor rural school seems like the ticket to canceling her hefty student debt—until she lands in a tiny, out-of-step Mississippi River town. Augustine, Louisiana, is suspicious of new ideas and new people, and Benny can scarcely comprehend the lives of her poverty-stricken students. But amid the gnarled live oaks and run-down plantation homes lie the century-old history of three young women, a long-ago journey, and a hidden book that could change everything.

An excerpt from The Book of Lost Friends

A single ladybug lands featherlight on the teacher’s finger, clings there, a living gemstone. A ruby with polka dots and legs. Before a slight breeze beckons the visitor away, an old children’s rhyme sifts through the teacher’s mind.

Ladybug, ladybug, fly away home,
Your house is on fire, and your children are gone.

The words leave a murky shadow as the teacher touches a student’s shoulder, feels the damp warmth beneath the girl’s roughly woven calico dress. The hand-stitched neckline hangs askew over smooth amber-brown skin, the garment a little too large for the girl inside it. A single puffy scar protrudes from one loosely buttoned cuff. The teacher wonders briefly about its cause, resists allowing her mind to speculate.

What would be the point? she thinks.

We all have scars.

She glances around the makeshift gathering place under the trees, the rough slabwood benches crowded with girls on the verge of womanhood, boys seeking to step into the world of men. Leaning over crooked tables littered with nib pens, blotters, and inkwells, they read their papers, mouthing the words, intent upon the important task ahead.

All except this one girl.

“I can’t do it.” The girl sags, defeated in her own mind. “Not . . . not with these people looking on.” Her young face casts miserably toward the onlookers who have gathered at the fringes of the open-air classroom—moneyed men in well-fitting suits and women in expensive dresses, petulantly waving off the afternoon heat with printed handbills and paper fans left over from the morning’s fiery political speeches.

“You never know what you can do until you try,” the teacher advises. Oh, how familiar that girlish insecurity is. Not so many years ago, the teacher was this girl. Uncertain of herself, overcome with fear. Paralyzed, really.

“I can’t,” the girl moans, clutching her stomach.

Bundling cumbersome skirts and petticoats to keep them from the dust, the teacher lowers herself to catch the girl’s gaze. “Where will they hear the story if not from you—the story of being stolen away from family? Of writing an advertisement seeking any word of loved ones, and hoping to save up the fifty cents to have it printed in the Southwestern paper, so that it might travel through all the nearby states and territories? How will they understand the desperate need to finally know, Are my people out there, somewhere?”

The girl’s thin shoulders lift, then wilt. “These folks ain’t here because they care what I’ve got to say. It won’t change anything.”

“Perhaps it will. The most important endeavors require a risk.” The teacher understands this all too well. Someday, she, too, must strike off on a similar journey, one that involves a risk.

Today, however, is for her students and for the “Lost Friends” column of the Southwestern Christian Advocate newspaper, and for all it represents. “At the very least, we must tell our stories, mustn’t we? Speak the names? You know, there is an old proverb that says, ‘We die once when the last breath leaves our bodies. We die a second time when the last person speaks our name.’ The first death is beyond our control, but the second one we can strive to prevent.”

“If you say so,” the girl acquiesces, tenuously drawing a breath. “But I best do it right off, so I don’t lose my nerve. Can I go on and give my reading before the rest?”

The teacher nods. “If you start, I’m certain the others will know to follow.” Stepping back, she surveys the remainder of her group. All the stories here, she thinks. People separated by impossible distance, by human fallacy, by cruelty. Enduring the terrible torture of not knowing.

And though she’d rather not—she’d give anything if not—she imagines her own scar. One hidden beneath the skin where no one else can see it. She thinks of her own lost love, out there. Somewhere. Who knows where?

A murmur of thinly veiled impatience stirs among the audience as the girl rises and proceeds along the aisle between the benches, her posture stiffening to a strangely regal bearing. The frenzied motion of paper fans ceases and fluttering handbills go silent when she turns to speak her piece, looking neither left nor right.

Finally, the girl’s chin rises with stalwart determination. Her voice carries past the students to the audience, demanding attention as she speaks a name that will not be silenced on this day. “I am Hannie Gossett.”

The dream takes me from quiet sleep, same way it’s done many a time, sweeps me up like dust. Away I float, a dozen years to the past, and sift from a body that’s almost a woman’s into a little­girl shape only six years old.

Though I don’t want to, I see what my little-­girl eyes saw then.

I see buyers gather in the trader’s yard as I peek through the gaps in the stockade log fence. I stand in winter-­cold dirt tramped by so many feet before my own two. Big feet like Mama’s and small feet like mine and tiny feet like Mary Angel’s. Heels and toes that’s left dents in the wet ground.

How many others been here before me? I wonder. How many with hearts rattlin’ and muscles knotted up, but with no place to run?

Might be a hundred hundreds. Heels by the doubles and toes by the tens. Can’t count high as that. I just turned from five years old to six a few months back. It’s Feb’ary right now, a word I can’t say right, ever. My mouth twists up and makes Feb-­ba-­ba-­ba-­bary, like a sheep. My brothers and sisters’ve always pestered me hard over it, all eight, even the ones that’s younger. Usually, we’d tussle if Mama was off at work with the field gangs or gone to the spinnin’ house, cording wool and weaving the homespun.

Our slabwood cabin would rock and rattle till finally somebody fell out the door or the window and went to howlin’. That’d bring Ol’ Tati, cane switch ready, and her saying, “Gonna give you a breshin’ with this switch if you don’t shesh now.” She’d swat butts and legs, just play-­like, and we’d scamper one over top the other like baby goats scooting through the gate. We’d crawl up under them beds and try to hide, knees and elbows poking everywhere.

Can’t do that no more. All my mama’s children been carried off one by one and two by two. Aunt Jenny Angel and three of her four girls, gone, too. Sold away in trader yards like this one, from south Louisiana almost to Texas. My mind works hard to keep account of where all we been, our numbers dwindling by the day, as we tramp behind Jep Loach’s wagon, slave chains pulling the grown folk by the wrist, and us children left with no other choice but to follow on.

But the nights been worst of all. We just hope Jep Loach falls to sleep quick from whiskey and the day’s travel. It’s when he don’t that the bad things happen—­to Mama and Aunt Jenny both, and now just to Mama, with Aunt Jenny sold off. Only Mama and me left now. Us two and Aunt Jenny’s baby girl, li’l Mary Angel.

Every chance there is, Mama says them words in my ear—­who’s been carried away from us, and what’s the names of the buyers that took them from the auction block and where’re they gone to. We start with Aunt Jenny, her three oldest girls. Then come my brothers and sisters, oldest to youngest, Hardy at Big Creek, to a man name LeBas from Woodville. Het at Jatt carried off by a man name Palmer from Big Woods. . . .

Prat, Epheme, Addie, Easter, Ike, and Baby Rose, tore from my mama’s arms in a place called Bethany. Baby Rose wailed and Mama fought and begged and said, “We gotta be kept as one. The baby ain’t weaned! Baby ain’t . . .”

It shames me now, but I clung on Mama’s skirts and cried, “Mama, no! Mama, no! Don’t!” My body shook and my mind ran wild circles. I was afraid they’d take my mama, too, and it’d be just me and little cousin Mary Angel left when the wagon rolled on.

Lisa Wingate is a former journalist, an inspirational speaker, and the author of numerous novels, including the #1 New York Times bestseller Before We Were Yours, which has sold more than 2.2 million copies. The co-author, with Judy Christie, of the nonfiction book, Before and After, Wingate is a two-time ACFW Carol Award winner, a Christy Award nominee, an Oklahoma Book Award finalist, and a Southern Book Prize winner. She lives with her husband in North Texas. 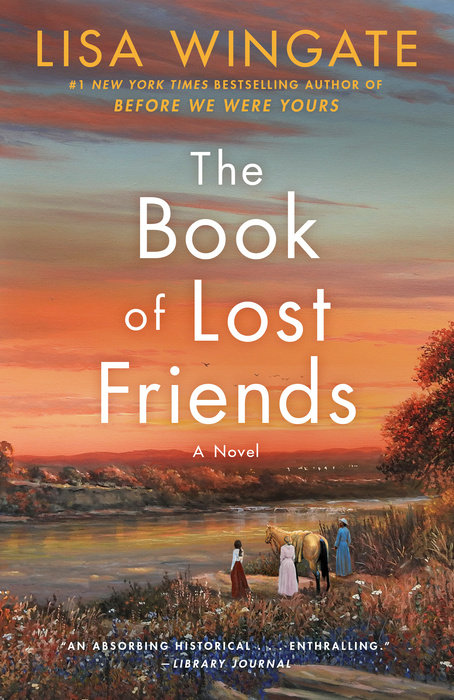