What if you found out that your family isn’t yours at all? How far would you go to protect them? A gripping new psychological thriller from the bestselling author of The Girl Before. . . .

Pete Riley answers the door one morning and lets in a parent’s worst nightmare. On his doorstep is Miles Lambert, a stranger who breaks the devastating news that Pete’s son, Theo, isn’t actually his son—he is the Lamberts’, switched at birth by an understaffed hospital while their real son was sent home with Miles and his wife, Lucy. For Pete, his partner Maddie, and the little boy they’ve been raising for the past two years, life will never be the same again.

The two families, reeling from the shock, take comfort in shared good intentions, eagerly entwining their very different lives in the hope of becoming one unconventional modern family. But a plan to sue the hospital triggers an official investigation that unearths some disturbing questions about the night their children were switched. How much can they trust the other parents—or even each other? What secrets are hidden behind the Lamberts’ glossy front door? Stretched to the breaking point, Pete and Maddie discover they will each stop at nothing to keep their family safe.

They are done playing nice.

An excerpt from Playing Nice

It was just an ordinary day.

If this were a color piece or a feature, the kind of thing I used to write on a daily basis, the editor would have rejected it just for that opening sentence. Openers need to hook people, Pete, she’d tell me, tossing my pages back at me across my desk. Paint a picture, set a scene. Be dramatic. In travel journalism especially, you need a sense of place. Take me on a journey.

So: It was just an ordinary day in Willesden Green, north London.

Because the fact is, before that knock on my door, it was just an ordinary day. An unusually nice one, admittedly. The sun was shining, the air was crisp and blue. There was still some snow on the ground, hiding in corners, but it had that soft sugary look snow gets when it’s all but melted, and none of the kids streaming into the Acol Road Nursery and Preschool could be bothered to get their mittens wet trying to scoop it up for snowballs.

Actually, there was one small thing out of the ordinary. As I took Theo into the nursery, or rather followed him in—we’d given him a scooter for his second birthday, a chunky three-wheeler he was now inseparable from—I noticed three people, a woman and two men, on the other side of the road, watching us. The younger man was roughly my age, thirty or so. The other was in his fifties. Both wore dark suits with dark woolen coats over them, and the woman, a blonde, was wrapped up in a kind of fake-fur parka, the sort of thing you might see on a fashionable ski slope. They looked too smart for our part of London. But then I saw that the older man was holding a document case in his gloved hand. An estate agent, I guessed, showing some prospective buyers the local childcare facilities. The Jubilee Line goes all the way from our Tube station to Canary Wharf, and even the bankers have been priced out of West Hampstead these days.

Something about the younger man seemed familiar. But then I was distracted by Jane Tigman, whose son Zack was already starting to thrash and scream in her arms at the prospect of being left. She hadn’t realized that the trick is to make sure they walk into nursery on their own rather than being carried, which simply makes the moment of separation more final. Then there was a note about World Book Day on the nursery door that hadn’t been there yesterday—God, yet another costume I’d have to organize—and after that I had to separate Theo from his helmet, gloves, and coat, stuff the gloves deep enough into the coat pockets that they wouldn’t fall out—I still hadn’t gotten around to putting name tags on them—and help him hang the coat on his peg, deep among all the others, before crouching down to give him a final pep talk.

“So no grabbing. And take turns. That’s very important. Remember we said we’d take turns to choose lunch? So today it’s your turn, and tomorrow it’ll be mine. What do you want for lunch?”

“Booby smoovy,” he announced after a moment’s thought.

“Blueberry smoothie,” I repeated clearly. “Okay. I’ll make some before I pick you up. Have a good morning.”

I gave him a kiss and off he went, happy as a clam.

I turned. It was Susy, the woman who ran the nursery. It looked as if she’d been waiting for Theo to go. “Can I have a word?” she added.

I snapped my fingers. “The sippy cup. I forgot. I’ll get another one today—”

“It isn’t about the sippy cup,” she interrupted. “Shall we talk in my office?”

“It’s nothing to worry about,” she said as we sat down, which of course instantly made me aware that it was definitely something to worry about. “It’s just that there was another incident yesterday. Theo hit one of the other children again.”

“Ah,” I said defensively. That was the third time this month. “Okay. It’s something we have been working on at home. According to the internet, it sometimes happens at this age if physical skills get ahead of verbal skills.” I smiled ruefully, to show that I wasn’t stupid enough to believe every parenting theory I read on the internet, but neither was I one of those entitled middle-class dads who thought that just because my son was now at nursery I wasn’t required to put any effort into being his parent anymore; or, even worse, was blind to the possibility of my little darling having any faults in the first place. “And of course, his speech is a little delayed. But I’d welcome any suggestions.”

Susy visibly relaxed. “Well, as you say, it is typical two-year-old stuff. I’m sure you know this, but it can help if you model the correct behavior. If he sees you getting cross or aggressive, he’ll come to believe that aggression is a legitimate response to stress. What about the TV programs he watches? I’m afraid even Tom and Jerry may not be appropriate at this age, at least not until the hitting stage is over. And if you play any violent videogames yourself—”

“I don’t play videogames,” I said firmly. “Quite apart from anything else, I don’t have the time.”

“I’m sure. It’s just that we don’t always think about the consequences of things like that.” She smiled, but I could almost see the thought process behind her eyes. Stay-at-home dad equals aggressive kid. She wouldn’t have asked Jane Tigman if she played Call of Duty.

“And we’re working on sharing, too,” I added. “Taking turns who chooses what to have for lunch, that kind of thing.”

“Well, it certainly sounds as if you’re on top of it.” Susy got to her feet to show the discussion was over. “We’ll keep a close watch here, and let’s hope he grows out of it.”

Understandably, then, I wasn’t thinking about the wealthy-looking couple and their estate agent as I left the nursery. I was worrying about Theo, and why he was taking so long to learn to play nicely with the other kids. But I’m pretty sure, looking back, that by the time I reached the street, the three of them were nowhere to be seen.

I, Donald Joseph Maguire, make oath and swear as follows:

1.I am the proprietor and chief investigator of Maguire Missing Persons, a London-based investigative agency which traces over two hundred individuals a year on behalf of our clients. We do not advertise. All our work comes by personal referral.

2.Prior to starting this business, I was a senior detective with the Metropolitan Police, a position I held for thirteen years, leaving with the rank of detective inspector.

3.Last August I was approached by Mr. Miles and Mrs. Lucy Lambert, of 17 Haydon Gardens, Highgate, N19 3JZ. They wished me to act for them in the matter of tracing their son.

JP Delaney is a pseudonym for a writer who has previously written fiction under other names. Delaney is the author of the New York Times bestseller The Girl Before, which is being brought to the screen by Academy Award winners Ron Howard and Brian Grazer’s Imagine Entertainment. 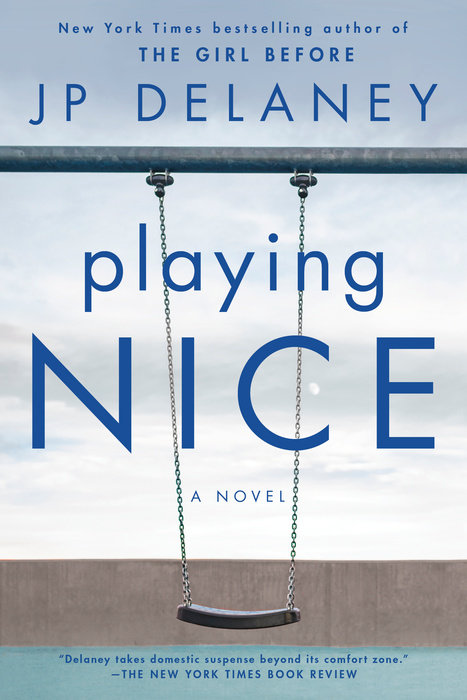