With the discovery of a New World comes an explosion of culinary possibilities. The later novels in Diana Gabaldon’s Outlander series and the Lord John Grey series have Jamie, Claire, Lord John, and friends embark on their revolutionary adventures across the Atlantic and back again—and with their voyages come hundreds of new mouthwatering flavors to entice the taste buds of even the most discerning palates.

Professional chef and founder of Outlander Kitchen, Theresa Carle-Sanders returns with another hallmark cookbook—one that dexterously adapts traditional recipes for hungry, modern appetites. Interpreted with a spirit of generous humor and joyous adventure, the recipes herein are a mixture of authentic old-worldreceipts from Scottish settlers, new-world adaptations inspired by the cuisine of indigenous peoples, and humorously delicious character-inspired dishes—all created to satisfy your hunger and insatiable craving for everything Outlander, and with the modern kitchen in mind:

With vivid, full-color photographs and a plethora of extras—including preserves, condiments, cocktails, and pantry basics—Outlander Kitchen: To the New World and Back Again is the highly anticipated follow-up to the immersive culinary experience that inspired thousands of Outlander fans to discover and embrace their inner chefs!

An excerpt from Outlander Kitchen: To the New World and Back Again

To the New World and Back Again

I was deep into my first-stage love affair with Outlander when My Englishman, Howard, and I moved to Pender Island from Vancouver in 2003. I had read each of Diana Gabaldon’s books, up to The Fiery Cross (the last book available at the time), at least twice before we pulled into the driveway of our little house in the woods, searching for a new way of life beyond the stressed, overworked existence we knew in the city.

And although we had no dreams of living off the land—we’re on a third of an acre—looking back, I can’t imagine the first years of our semirural life without the influence of Jamie and Claire. I took advantage of our first backyard and planted a small herb garden and a larger one of vegetables, then spent the next few seasons learning why most of the veggies I planted did not thrive in our decent-looking soil. (The answer is cedar trees. They’re big, greedy feeders with clumping roots.) I hung our laundry on the line and chopped wood. I walked every day in the woods and along the shores of this small island, and embraced a slower rhythm of life, long forgotten to me in my big-city life with my big-corporate job.

Not that it wasn’t hectic at times. We moved here within a month of first viewing the property, and without much of a plan about how we were going to make a living. We were very sure that the exponentially rising cost of living in Vancouver wasn’t going to work for us in the long term though, so with a sense of adventure, and semi-spontaneous, life-changing inspiration, we took our savings and cast our home-hunting net far enough to include the Southern Gulf Islands between Vancouver and Victoria on Canada’s west coast. We quickly narrowed the choices down to Pender, because, unlike some of its neighbors who were still using dial-up, high-speed Internet was available—an essential in the twenty-first century, even when you’re trying to simplify.

I used that connection with the outside world, combined with an old-world skill taught to me by my mom, to start an online business selling yoga accessories that I sewed on a little table under our bedroom window. (Just one of the essential life tasks Mom made sure to teach us all. I still have the felt elephant eyeglass case my eldest brother, Trev, sewed before I was born, and my other older brother, Ron, executes the neatest line of hand stitching you’ve ever seen.)

My most popular item was a silk brocade eye mask lightly filled with flaxseeds and lavender. It took off after a couple of mentions on “alternative lifestyle” forums, especially in Great Britain. For almost two years, I collected the orders from my computer in the morning before sitting down at the machine to sew, on average, a dozen eye masks per day. From there I’d head to the island’s post office and ship them off to their new owners across the Atlantic.

Meanwhile, Howard was working at whatever he could lay his hands to as well. We were earning a living, but it was tight. When my dad died unexpectedly and rather quickly in 2007, I found myself reevaluating everything in my grief. As a result (thank goodness for an understanding husband), I fulfilled a lifelong dream by returning to culinary school the next year. And the year after that, a random thought during a walk in the woods with the dog had me pondering what the rolls stuffed with minced pigeon and truffles from Voyager might taste like.

Diana was supportive of the idea from the beginning. She posted my first recipe for Rolls with Pigeon and Truffles on her website, and when that was a hit, posted my next one, Brianna’s Bridies from Drums of Autumn, a couple of months later. I published my first blog post for Outlander Kitchen in October 2010, and eventually, years of work, hundreds of blog posts, dozens of recipes, and a couple of seasons of Outlander on TV, culminated with the publication of Outlander Kitchen: The Official Outlander Companion Cookbook (henceforth known as OK1) in 2016.

Two years later, on another long walk in the woods, I was thinking about one of my favorite characters (Outlander is never far from my mind), Lord John, and why I enjoy his stories so much. This description of him from Diana in her introduction to “A Plague of Zombies” in Seven Stones to Stand or Fall sums up his circumstances well:

The thing about Lord John’s situation and career—unmarried, no fixed establishment, discreet political connections, fairly high-ranking officer—is that he can easily take part in farflung adventures rather than being bound to a pedestrian daily life. To be honest, once I started doing “bulges” (that is, shorter pieces of fiction) involving him, I just looked at which year it was and then consulted one of my historical timeline references to see what kinds of interesting events happened in that year. That’s how he happened to find himself in Quebec for the battle there.

Lord John is the original International Man of Mystery. His lack of attachment combined with substantial independent income and well-developed sense of adventure mean his life is never boring. He wines and dines in London, fights in Germany, governs in Jamaica, and, in his spare time, runs the occasional rescue mission to help those in need. He is always a gentleman, lives for good food, and never fails to make me laugh.

It was that walk with Lord John that rekindled my second-stage love affair with Outlander. I started my new reread that night, with, of course, the entire Lord John series. I then dove back into An Echo in the Bone and Written in My Own Heart’s Blood from the main series and finished with Diana’s Seven Stones to Stand or Fall, a collection of Outlander novellas published in 2017.

Outlander Kitchen: To the New World and Back Again features recipes from my reread. It follows Jamie, Claire, and friends on their revolutionary adventures, voyage to Scotland and back again, and eventual resettlement at Fraser’s Ridge. Others are on the move as well: Roger, Brianna, Jem, and Amanda, after finally settling into Lallybroch in the twentieth century, are separated and forced to return to the past to save their lives. Lord John, not to be left behind, makes more journeys to the New World and back again than anyone else in the Outlander universe. Add in stories like the prequel about Jamie and Ian Murray as young mercenaries in France, “Virgins,” and the story of how Hal Grey met and married Minnie Rennie, “A Fugitive Green” (both from Seven Stones to Stand or Fall), and this fictional cookbook author has a lot of culinary inspiration with which to work.

I often get asked how I choose the recipes that I feature on the blog and in the cookbooks. It all starts with my journals filled with Outlander food. Soon after Diana gave me permission to pursue Outlander Kitchen in 2010, I began recording EVERY mention of food I came across in all of her stories, large and small.

Sometimes the mention of food is very specific within the text, such as Ragout of Beef with Oysters (page 82) from Lord John and the Brotherhood of the Blade and Cranachan with Brian and Jenny (page 249) from Written in My Own Heart’s Blood. Other times, it is more vague, as with the mention of a thick soup in an excerpt from Lord John and the Haunted Soldier, which gives me a chance to use my culinary creativity and turn it into a delicious Leek and Potato Soup (page 49). I also regularly draw inspiration from Diana’s characters; when everyone’s favorite pig appeared from the burned ashes of the big house in An Echo in the Bone, I created The White Sow’s Crispy Pork Belly and Apple Slaw (page 125).

What was, at the beginning, a straightforward choice from my handwritten lists for the week’s recipe on Outlander Kitchen (Mrs. FitzGibbons’s Overnight Parritch from OK1 was the first recipe posted on the blog) grew into a more involved and complicated set of tasks as I assembled the first, and now this sequel (hereafter, OK2), cookbook.

From my handwritten journals, I began OK1 and OK2 by entering the long, unedited list of foods (more than 600 entries for OK2) from the source books into a spreadsheet. From there I am able to sort the information any way I want, delete what I don’t, and work until the chosen remains resemble the rough draft of a cook-book’s table of contents.

When I have multiple excerpts to choose from, for an oft-served dish like bannocks or biscuits, for example, I review my choices over and over, juggling them around in my head with my twenty years of reading Diana’s stories, including the last ten years of food-specific interactions. The excerpt that wins in the end generally is emotionally charged, whether it be poignant, funny, or, as with many of Diana’s scenes, both—one that puts the reader right back in touch with the characters, like the one introducing Almond Biscuits (page 260), featuring Germain at his mischievous best. 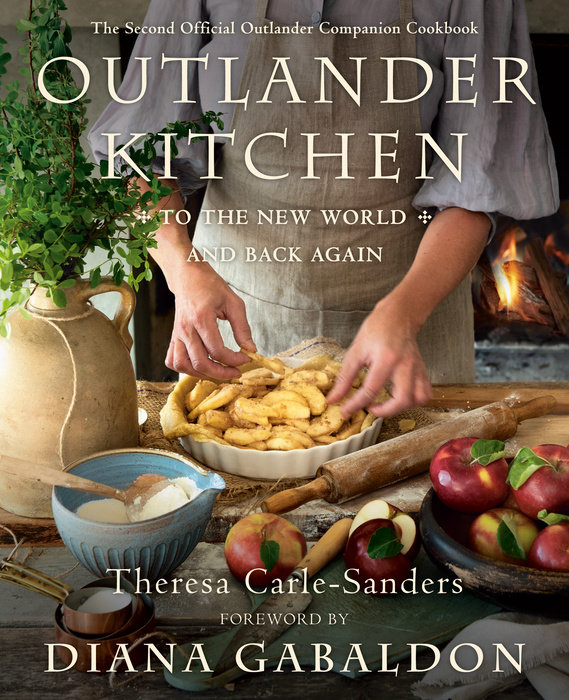