World War II brings together six remarkable young flight nurses, who face the challenges of war and its many heartbreaks and victories as unsung heroes, in this inspiring novel from #1 New York Times bestselling author Danielle Steel.

Audrey Parker’s life changes forever when Pearl Harbor is attacked on December 7, 1941. Her brother, a talented young Navy pilot, had been stationed there, poised to fulfill their late father’s distinguished legacy. Fresh out of nursing school with a passion and a born gift for helping others, both Audrey and her friend Lizzie suddenly find their nation on the brink of war. Driven to do whatever they can to serve, they enlist in the Army and embark on a new adventure as flight nurses.

Risking their lives on perilous missions, they join the elite Medical Air Evacuation Transport Squadron and fly into enemy territory almost daily to rescue wounded soldiers from the battlefield. Audrey and Lizzie make enormous sacrifices to save lives alongside an extraordinary group of nurses: Alex, who longs to make a difference in the world; Louise, a bright mind who faced racial prejudice growing up in the South; Pru, a selfless leader with a heart of gold; and Emma, whose confidence and grit push her to put everything on the line for her patients.

Even knowing they will not achieve any rank and will receive little pay for their efforts, the “Flying Angels” will give their all in the fight for freedom. They serve as bravely and tirelessly as the men they rescue on the front lines, in daring airlifts, and are eternally bound by their loyalty to one another. Danielle Steel presents a sweeping, stunning tribute to these incredibly courageous women, inspiring symbols of bravery and valor.

An excerpt from Flying Angels

It was a big day for the Parker family, on a perfect morning in June 1938. Audrey had set her mother’s clothes out for her the night before, the blue-gray silk suit she wore whenever she had something important to go to and felt well enough to go out. It didn’t get more important than this. Ellen’s son, Audrey’s brother, William Edward Parker, was graduating from Annapolis Naval Academy, as an ensign, like his father and grandfather before him. Ellen was only sorry that her late husband and father-in-law wouldn’t be there to see it. She and Audrey were the only family Will had now. Unlike his father and grandfather, Will was more interested in planes than ships. His next stop was basic flight training at the Naval Air Station at Pensacola in Florida He was going to be a navy pilot. He would receive more advanced flight training after that, and eventually would become an expert at taking off and landing on an aircraft carrier. He had earned a Bachelor of Science degree.

His father, Captain Francis Parker, had died three years before of a brain tumor. His grandfather, who had died when Will and Audrey were very young, was only a dim memory now, a tall man in a uniform with a lot of braid on it: three-star Vice Admiral Jeremiah Parker. They were a distinguished naval family, and there had never been any question about Will following in their footsteps. It was an unspoken law in their household, Parker men went to Annapolis, and Will wouldn’t have dared do otherwise. He wouldn’t have wanted to disappoint his grandfather or his dad, even though they were no longer there to see it. He would be wearing his dress white uniform for the graduation ceremony.

Her parents’ illnesses had had an impact on Audrey’s life. Only months after Audrey’s father had died, after his painful deterioration from cancer, her mother had begun exhibiting strange symptoms: muscle weakness, a lack of balance, and trembling hands. Both Ellen and Audrey thought it was caused by nerves at first, but then she had been diagnosed with the early stages of Parkinson’s disease. The doctors had explained to them that it was a progressive illness that would eventually leave her severely impaired, bedridden, and unable to walk. Hopefully that would be a long way off.

For two years before that, Audrey had helped take care of her father during the advancing stages of his illness until he died. As a result, she had developed an unusual seriousness and maturity for her age, and seemed much older now than her eighteen years. She had spent five years nursing her parents, which had ultimately affected her life choices. Her social life had become almost nonexistent while her parents were ill. She had no time to see friends, and rarely dated. While her classmates were having fun during their high school years, Audrey had to be responsible far beyond her true age, and act as support system and unofficial nurse. Her only distraction was the books she read, which kept her from being lonely and provided an escape from the daily realities she faced. She was graduating from high school in a week and was starting nursing school in September. She’d never had a lifetime ambition to become a nurse, but knowing the long, slow degenerative process her mother had ahead of her, Audrey wanted to be able to help her and take care of her, and hopefully extend her mother’s life.

She had no resentment for the years she had already spent first helping with her father’s care, and then her mother’s. She’d given up a great deal for them, her ballet classes, sports, parties, and hanging out with other girls. She’d only been on a few dates, had nervously gone to senior prom, and worried so much about leaving her mother home alone that she had apologized to her date and left early. He’d been nice about it at the time but didn’t call her again. For a girl of eighteen, Audrey had already sacrificed a lot for her parents, accepted it as her duty to them, and didn’t resent it.

She was a pretty girl with a slim figure, long dark hair, and a delicate face. Her sky-blue eyes were serious, as she kept an eye on her mother, worried that she would fall and hurt herself. It had happened a few times, and they all knew it would happen again. It was the nature of her illness, which had advanced slowly but steadily in the past few years.

Audrey had grown up in Annapolis, a pretty town on the Chesapeake Bay. Her father had taken her and her brother sailing on weekends, and now she and Will sometimes went out in their small sailboat alone. She trusted him completely, and they were both good sailors. She looked up to him as her hero, and he provided her with the only distraction she engaged in, sailing and going to dinner with him occasionally. He brought her magazines and little gifts. She had adored him since they were children. He teased her and made her laugh, which made their burdens seem lighter to Audrey. She thought he was the perfect big brother.

Audrey had a few friends at school, but there was little time to spend with them since she always rushed home after school to help her mother. The friendships dwindled away as a result. She would have liked to spend time with her old girlfriends, but her life was one of responsibility and duty, which left no time for anything else. She was an excellent student. Her mother had been startled and touched when she decided to go to nursing school. Audrey had a gentle nature and a very nurturing side, which made nursing appeal to her, even beyond her mother’s illness. Whatever her motivation for going, Ellen thought she’d make an excellent nurse one day. She had a natural gift for medicine, and caring for others.

Audrey was sad that her brother would be going away for basic flight training. She loved having him nearby. He made everything seem lighter to her when she saw him. He lived in the dorms, but came home frequently to have a meal with her and their mother, or to take Audrey out for an hour. All of that was going to change now. After basic training, he’d be stationed somewhere else. She felt as though their days as a family were over. In a sense, Will had become her only friend. His leaving was going to be a loss and hardship for her.

She tried not to think of it as she helped her mother dress for the graduation ceremony. Ellen looked lovely in her blue-gray silk suit, and sat waiting on the couch in the living room for Audrey to dress hurriedly. She was wearing a red cotton suit, and was unaware of how beautiful she looked as she helped her mother stand and walk to the front door with her awkward halting gait. She held her mother’s arm firmly, helped her into the car, and drove them to the Yard, which was what everyone called the campus. Audrey had recently gotten her driver’s license and was a careful driver. She was responsible in all things, and enjoyed driving and the sense of freedom it gave her. She felt very grown up at the wheel of the family car. Both women were smiling as they took their places and waited for the graduation to begin.

When he appeared in the procession of graduating students, Will looked as tall and handsome as their father had been: six feet four, with straight blond hair that was neatly trimmed, and broad shoulders. He was wearing his dress white uniform. He was graduating with honors, which was no surprise to either of them. The graduates marched in while the Annapolis band played. President Roosevelt was the commencement speaker, and there were several other speeches. The diplomas were handed out, after which, as dictated by tradition, all the graduates threw their hats in the air in jubilation, clapped each other on the back, and there was a brief moment of pandemonium. The ceremony ended when they all sang “Navy Blue and Gold,” and Audrey saw that her mother was crying. It was an emotional moment for both of them, and William was beaming when he came to find them afterwards.

He promised to meet up with his friends again later in the day and helped walk his mother to the car in the parking lot. He drove them to Reynolds Tavern, where there were graduates having lunch with their families at almost every table.

Ellen couldn’t believe how quickly Will’s Annapolis years had sped past them. His father had died during Will’s freshman year, and the next three years had been a blur to Ellen, and to Audrey too, while she worried about her mother and learned how to care for her and address her increasing needs. And soon Will would be a navy pilot. He was twenty-two years old, and looked every inch like what an Annapolis graduate should look like. He was the perfect all-American boy. Tall, ramrod straight, a powerful athlete with a bright mind, broad smile, and kind heart. In Ellen and Audrey’s eyes, he was the perfect son and brother, and his father would have been proud of him too.

Danielle Steel has been hailed as one of the world’s bestselling authors, with almost a billion copies of her novels sold. Her many international bestsellers include Complications, Nine Lives, Finding Ashley, The Affair, Neighbors, and other highly acclaimed novels. She is also the author of His Bright Light, the story of her son Nick Traina’s life and death; A Gift of Hope, a memoir of her work with the homeless; Expect a Miracle, a book of her favorite quotations for inspiration and comfort; Pure Joy, about the dogs she and her family have loved; and the children’s books Pretty Minnie in Paris and Pretty Minnie in Hollywood. 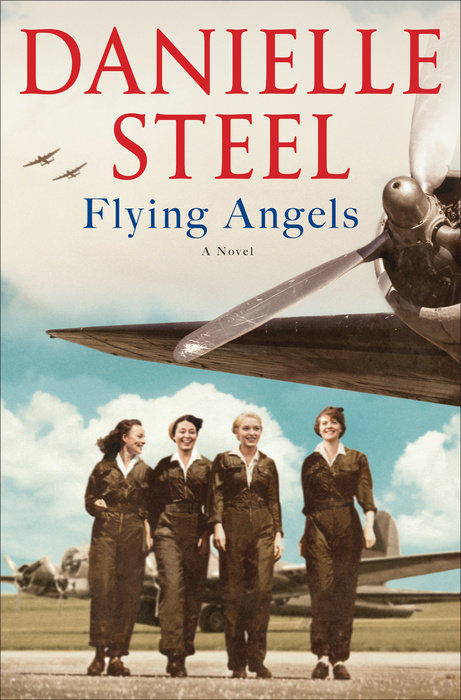