“If I were to serve the Empire, you would command my allegiance.”

Such was the promise Grand Admiral Thrawn made to Emperor Palpatine at their first meeting. Since then, Thrawn has been one of the Empire’s most effective instruments, pursuing its enemies to the very edges of the known galaxy. But as keen a weapon as Thrawn has become, the Emperor dreams of something far more destructive.

Now, as Thrawn’s TIE defender program is halted in favor of Director Krennic’s secret Death Star project, he realizes that the balance of power in the Empire is measured by more than just military acumen or tactical efficiency. Even the greatest intellect can hardly compete with the power to annihilate entire planets.

As Thrawn works to secure his place in the Imperial hierarchy, his former protégé Eli Vanto returns with a dire warning about Thrawn’s homeworld. Thrawn’s mastery of strategy must guide him through an impossible choice: duty to the Chiss Ascendancy, or fealty to the Empire he has sworn to serve. Even if the right choice means committing treason.

“Another excellent addition to the new canon . . . Thrawn: Treason will reward you thoroughly for your time.”—GeekMom

“If you’ve ever enjoyed a Thrawn story—whether that was Heir to the Empire and its sequels or Zahn’s new novels—you’ll find more of what you enjoy in Treason.”—Dork Side of the Force

Communications to and from a Star Destroyer like the ISD Chimaera came from many directions, and at many different status and security levels. Each message carried a numerical code specifying the degree of importance, and those codes defined how and by whom each was to be handled.

Commodore Karyn Faro knew all of those codes. But somehow, in a still-youthful corner of her mind that years of Imperial military regulation and order hadn’t quite eradicated, those codes also somehow ended up as colors.

Identification signals from nearby ships or status reports from mid-distant bases, routine matters handled by junior officers, came in shades of green or blue. The small percentage of more significant orders and reports from Coruscant—which was better known by the bureaucracy these days as Imperial Center—were pictured in shades of yellow or orange. Those were screened by the Chimaera’s more senior officers. The rare handful of vital or top-secret messages coming from the senior admirals of High Command, all of which were handled by Faro personally, moved into the range of darker shades of red or purple.

And the few—the very few—that came from outside the official navy chain of command, the ones that went directly to Grand Admiral Thrawn himself, were an unremittent black.

And they were never good news.

Standing just inside Thrawn’s office, with the image from the desk holoprojector facing away from her, Faro couldn’t see Tarkin’s expression. But she could see Thrawn’s, and the subtle hardening of those facial muscles sent a small shiver up her back.

“Orson Krennic has been quite persuasive,” Tarkin continued, “about diverting the funding to his own project: Stardust.”

“The Emperor has assured me that he supports my project,” Thrawn replied. His face was back under control now, Faro noted, and his voice its usual calm.

But there was an edge there that Faro had heard before. The Emperor and Thrawn had a special relationship that dated all the way back to Thrawn’s first arrival on Coruscant. Rumor had it that especially in those early years the two men had sometimes disappeared for hours into the palace’s strategic planning center, closeted with a few top admirals and trusted moffs, for conversations on still-unknown topics. If Krennic was playing fast and loose with one of the Emperor’s favorites, he was treading on dangerous ground.

On top of the ridiculous political maneuvering, Krennic was risking the Empire’s very survival. The TIE Defender assembly line Thrawn had established on the Outer Rim world of Lothal was poised to turn out the best starfighters the galaxy had ever seen: fast, maneuverable, heavily armed, and—in a radical departure from the rest of the TIE series—equipped with shields and hyperdrives. They could take on anything even the best-equipped pirate gang or uncooperative system could field, and could grind the slowly growing rebel movement into dust.

Without the Defender, Coruscant was in for a long fight on all three of those fronts. With the Defender, the Empire would be unbeatable.

“In my view, Director Krennic’s project has been nothing but expenses and excuses for years on end,” Tarkin said. “If construction of the Defender is to continue, you must make your case directly to the Emperor himself. I have already arranged the meeting.”

The holoprojector flicked off, and Thrawn tapped the comm switch. “Commander, inform Governor Pryce I’m departing for Coruscant,” he ordered. “As soon as you have your course, make the jump into hyperspace.”

The bridge acknowledged. For a moment Thrawn gazed at the desk as if considering his options; then he looked up at Faro. “Commodore,” he said gravely. “Is that the communications report I requested?”

“Yes, sir,” Faro said, coming forward and holding out her datapad. “I’m afraid we were unsuccessful in finding a pattern.”

Thrawn took the datapad, and for a moment he studied the numbers in silence. Faro watched him, wondering if, like her, he was thinking that Commander Eli Vanto might have been able to dig something out of the seemingly random times, dates, and comm frequencies she’d collected. Vanto had been gifted at such things.

But Vanto was gone, disappeared without a trace one day from the Chimaera. And while rumors placed him everywhere from Wild Space to a secret planning group in the Emperor’s palace to floating dead in deep space, the fact was that no one really knew what had happened to him.

Faro had asked Thrawn about it at the time. The grand admiral’s response had been polite enough, but Faro had left the conversation with the clear understanding that she was never to ask that question again.

Privately, given the fondness Thrawn had had for the young man and the master–pupil relationship they’d shared as Thrawn nurtured Vanto’s career, Faro was pretty sure Vanto was dead. She could think of no other reason for him to have left the Chimaera.

“Perhaps the rebels are being unusually cautious,” Thrawn said, handing back the datapad. “It could also be that the group planning to rescue Hera Syndulla is small enough that it has no need of overt communications.”

Faro felt her lip twitch. Yes, the group that was undoubtedly plotting Syndulla’s rescue from Governor Pryce’s detention block was certainly small. But it should by no means be discounted, if only because it included the former Jedi Kanan Jarrus and the young would-be Jedi Ezra Bridger.

In some ways, Faro would have preferred that Syndulla had died with the rest of her X-wing squadron in their abortive attempt to wrest the space over Lothal away from the Chimaera and the rest of Thrawn’s force. Prisoners could be useful in a number of ways, but they also created headaches and focal points for new enemy operations.

With Thrawn completely in charge, Faro had no doubt he would turn those liabilities into assets. But Pryce had the prisoner, and she didn’t have Thrawn’s intelligence, subtlety, or sheer strategic skill.

Even worse was the fact that Pryce had allowed herself to become emotionally involved in the situation. The governor was taking the rebels’ attacks on her planet personally, and that meant thinking with her heart instead of her head. Taking Thrawn’s advice and influence away from Lothal, even for a few days, could mean disaster.

At the very least, Syndulla could die without rendering any useful service to the Empire. That would be a waste of a valuable resource, which Pryce also didn’t seem to care about.

“I take it you disapprove of the Chimaera traveling to Coruscant?”

“Yes, sir, I do,” Faro said. Thrawn had long since learned how to read her face and body language. Faro had long since accepted that ability without getting freaked out by it. “I don’t think Governor Pryce has any idea what kind of nasty she has by the tail with Syndulla. If Jarrus and his team move to rescue her, I don’t think Pryce can stop them.”

“Agreed,” Thrawn said. “On the other hand, losing Syndulla would be a relatively small defeat. Losing the TIE Defender program would be catastrophic. If Director Krennic’s project is the one I think it is, it represents a strategically shortsighted approach to both offensive and defensive warfare. If he has indeed persuaded the Emperor to divert the Defenders’ funding, the Empire’s entire future would be strongly impacted.”

“Yes, sir,” Faro said. Lord Vader, she knew, had also expressed interest in the Defender, especially after his experiences flying one against the Grysk forces out in the Unknown Regions. That support should certainly weigh in on Thrawn’s side.

But Vader spoke for the Emperor. If the Emperor turned his back on the Defender, so would Vader. 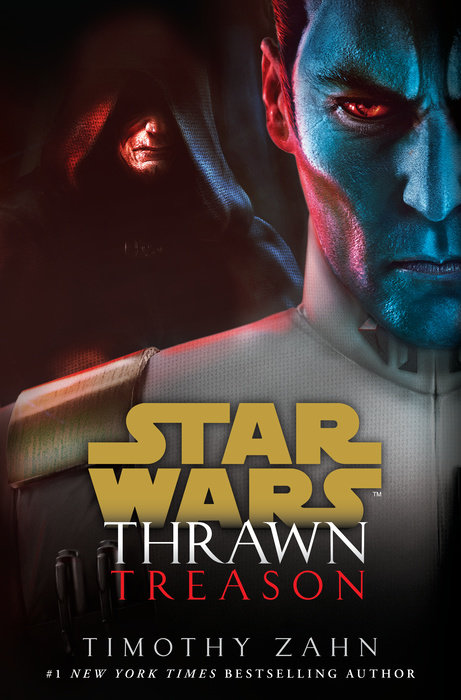