From the health expert and New York Times bestselling author of The Keto Reset Diet comes a groundbreaking ketogenic eating and lifestyle plan tailored for longevity, health, and happiness.

At age sixty-six, ancestral health movement leader Mark Sisson is still in peak athletic condition and exceptional health. He credits his ketogenic diet and complementary lifestyle practices as the reason, and rightly so—research has confirmed the anti-aging benefits of following a high-fat, moderate-protein, low-carb eating pattern.

In Keto for Life, you’ll implement a holistic plan of action to live a long, healthy, and happy life with Sisson’s Four Pillars of Longevity: Metabolic Flexibility, Movement and Physical Fitness, Mental Flexibility, and Rest and Recovery. Through mindful eating, moving, thinking, and resting, you can initiate DNA repair and cellular rejuvenation to actually reverse the aging process and halt cognitive or physical decline.

You’ll discover how to escape carbohydrate dependency once and for all, incorporate the most potent ketogenic superfoods and supplements available to boost brain function and protect against heart disease, dial in your sleep habits and recovery patterns for an immediate energy boost, and successfully manage modern life stressors like hyperconnectivity. And with the game-changing 21-Day Biological Clock Reset, you’ll create a daily longevity routine that feels natural and easy to permanently maintain.

An excerpt from Keto for Life

An Evolved Perspective on Longevity

An explosion of scientific discovery in recent years has given us powerful tools to understand and combat the sad, steady demise in physical and cognitive function (and enjoyment of life!) that we have erroneously come to believe represents the aging process. Compelling scientific evidence is accumulating each day to confirm that the conventional understanding of the aging process is an absolute farce. The aging process should really be defined as: the accelerated decline in function and healthspan caused by adverse lifestyle practices that conflict with our genetic expectations for health.

Dr. Art De Vany calls aging “an illusion,” and this is validated by a scientific concept known as the DNA damage theory of aging. De Vany, author of The New Evolution Diet, is one of the forefathers of the ancestral health movement. He has been a great inspiration to me on my journey, for he was blogging thoughtfully about some of the foundational elements of the primal/paleo/keto diet many years before they achieved wide acceptance. De Vany also walks his talk, maintaining exceptional physical fitness into his eighties with a truly primal exercise regimen featuring brief, ultra-explosive workouts followed by hours of fasting to achieve what he calls “cellular renewal.” De Vany elaborates on the illusion of aging: “The only genes that have been discovered to have any bearing on aging are regenerative or defensive pathways. The aging process is a loss of cell function, a loss of cell integrity, a loss of the ability of stem cells to renew tissues. Aging, basically, is damage.” Furthering the thought, De Vany asserts that, “there is no such thing as ‘healthy aging’ because damaged cells are not healthy.”

While DNA damage occurs as a consequence of living life (e.g., sore muscles after a workout, or getting a sunburn at the beach), it is the unrepaired accumulation of routine cellular damage that we inaccurately perceive to be normal and inevitable consequences of chronology: wrinkled skin, loss of bone density, declining neuron firing efficiency in the brain, proliferation of cancerous cells, and so forth. You now have permission to recategorize these and other markers as “damage” instead of “aging.” Of course, the reason we don’t routinely live to 150 is that even with clean living and efficient cellular repair processes happening, some DNA damage inevitably lingers and accumulates. This is particularly apparent in the most prominent areas of disease or obvious decline as we get up in years: the eyes, brain, cardiovascular system, and skin--some of the longest lasting (and hence most vulnerable) cells in the body.

In progressive health circles, chronic inflammation--a prolonged and unhealthy activation of your body’s inflammatory fight-or-flight response due to the stressors of modern life--is often characterized as the root of all evil. In contrast, genes are hardwired to respond to brief fight-or-flight stressors with an acute inflammatory response. When you hoist a heavy weight or take off sprinting, a powerful cocktail of stress hormones floods your bloodstream--cortisol, epinephrine, norepinephrine, dopamine, and serotonin. You feel alert, alive, and energized, with your brain, muscles, and organs performing far beyond baseline. Same goes for a cold-water plunge. Then, when you complete your sprint workout or exit the cold tub or sauna, your body works hard to return hormone levels, body temperature, and overall energy systems back to homeostasis. Consequently, you adapt and become more resilient against not only the specific stressor you endured but all manner of future stressors. It’s the same fight-or-flight response whether you’re in a sprint or a traffic jam. These appropriate fight-or-flight stressors that promote an adaptive response are called hormetic stressors. In contrast, the many forms of chronic stressors in modern life abuse and eventually exhaust delicate fight-or-flight hormonal mechanisms. When your fight-or-flight mechanisms get cooked, you end up with suppressed immune function and chronic pain and inflammation, and arrive at the familiar modern destination of burnout.

Generally, the distinction between healthy fight-or-flight inflammation and destructive chronic inflammation is the duration and/or frequency of the stressor. When you engage in a pattern of prolonged moderate-to-difficult workouts with insufficient recovery time between them, you promote breakdown, burnout, illness, and injury. Similarly, when you overconsume nutrient-deficient foods like gluten and sugar, you inflict chronic stress upon your body, because we are not well adapted to consuming processed foods. In particular, heavy gluten consumption can damage the delicate microvilli that line your intestinal wall. These are hair-like extensions on intestinal cell membranes that help with absorption, secretion, and other cellular functions. When microvilli become compromised by chronic inflammation, the resultant “leaky gut” condition allows undigested foreign particles to infiltrate the bloodstream (i.e., instead of just food and vitamins).

When shit enters your bloodstream (sorry, but the statement is literally true), your body’s defense systems perceive these foreign protein molecules to be a virus. As a consequence, an autoimmune response--the body attacking itself--occurs. Over time, leaky gut and autoimmune disturbances can manifest in conditions like arthritis, allergies, asthma, colitis, joint pain, and even cognitive conditions like ADHD, depression, and anxiety. Your body is chronically stressed because your inflamed intestinal cells are not processing energy efficiently. In fact, because these foreign protein molecules are similar to healthy proteins, your immune, endocrine, and digestive systems integrate them into routine cellular functions, a process known as molecular mimicry.

When you eliminate gluten--a prominent instigator of chronic inflammation--conditions often vanish quickly. Similarly, when exercise stress is minimized by slowing down the pace of your typical cardio workout into the fat-burning zone (so fight-or-flight stimulation is minimal), or shortening your high-intensity strength sessions (so the fight-or-flight hormone spike dissipates quickly), you can boost both your fitness and your general health, instead of falling apart from chronic stress.

Unfortunately, the modern human existence features both too many chronic stressors (bad foods, overly stressful exercise patterns, insufficient sleep, etc.) and not enough optimally brief fight-or-flight experiences. Instead, we indulge in ridiculous conveniences and luxuries, epidemic inactivity, little or no high-intensity exercise (many devoted fitness enthusiasts are content to watch CNN on the elliptical machine every time), and exist in temperature-controlled environments day and night. Our overly comfortable modern life causes atrophy to an assortment of critical fight-or-flight survival mechanisms. We go soft, become less resilient to all forms of stress, sustain more cellular damage from routine daily living, and trash our longevity prospects accordingly.

While we are all compromised by the many unhealthy elements of modern life that inflict damage upon our cells, we can do our best to mitigate modern hazards by engaging in behaviors that promote optimal gene expression. Instead of the accelerated decline that has become the norm, you can instead expect and demand a nice long run of peak function, and gracefully accept the inevitable gradual slowdowns caused by chronology. This book is not about cheating the laws of nature with biohacking lotions, potions, drugs, supplements, and contraptions. As you might imagine, most of this fountain of youth stuff is a waste of energy and money. This program is about repairing your cells at the DNA level, allowing you to realize the dream of feeling younger and more vibrant even as you add chronological years.

This evolved perspective about living a long, purposeful life is captured beautifully by Dr. Deepak Chopra and his Four Daily Intentions. Chopra, a longevity expert and mega-bestselling author, reminds himself of these guiding principles each morning in conjunction with a lengthy meditation session:

• Joyful, energetic body: No toxic substances allowed in! Ditto for being around toxic people.

• Loving, compassionate heart: Give others attention and acceptance as they are; that’s what everyone is looking for deep down.

• Lightness of being: Stay focused on the present, free from both regrets about the past and worries about the future.

The Four Daily Intentions have little to do with obsessively tracking your macros or pricking your fingers to generate glucose and ketone values. However, when you are able to live by ideals like these, you are very likely going to avoid today’s main health disconnects by default. For example, you’ll likely have a healthy relationship with food, enjoying celebratory, nutritious meals as one of the great pleasures of life. You’ll likely lead active, energetic days, balancing peak cognitive function with sufficient movement, exercise, exposure to nature, and time for quiet reflection. Your lightness of being may steer you clear of toxic relationships and exhausting exercise patterns that seem to be an outlet for the frustrations that accumulate when we live and think in rat-race mode. It also wouldn’t hurt to meditate for 2 hours every morning like Chopra!

MARK SISSON is the bestselling author of The Primal Blueprint, a former world-class endurance athlete, and one of the leading voices of the burgeoning Evolutionary Health Movement. His blog, MarksDailyApple.com, has paved the way for Primal enthusiasts to challenge conventional wisdom's diet and exercise principles and take personal responsibility for their health and well-being.

BRAD KEARNS is the President of Primal Blueprint Publishing, co-author (with Sisson) of Primal Endurance, and a former national champion and #3 world-ranked professional triathlete. 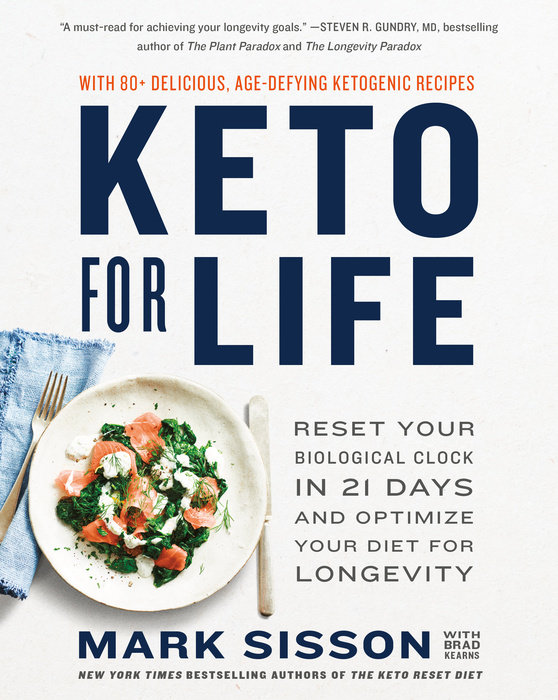