A couple determined not to end up like their divorced friends try a radical experiment—and get in way over their heads—in this hilarious, heartfelt novel from the author of We’re All Damaged.

To maximize their chance at immunity, Jessica and Mitch try something radical. Their friends’ divorces mostly had to do with sex—having it, not having it, wanting to have it with other people—so they decide to relax a few things. Terms are discussed, conditions are made, and together the Butlers embark on the great experiment of taking their otherwise happy, functional marriage and breaking some very serious rules.

Jessica and Mitch are convinced they’ve hit upon the next evolution of marriage. But as lines are crossed and hot bartenders pursued, they each start to wonder if they’ve made a huge mistake. What follows is sexy, fun, painful, messy, and completely surprising to them both. Because sometimes doing something bad is the only way to get to the heart of what’s really good.

An excerpt from Last Couple Standing

Everything that went so thoroughly wrong that spring can be traced back to The Divorces.

They came in a set of three, like celebrity deaths and plane crashes, and ruined everything, leaving the once invincible Core Four broken and tattered.

That’s what they called themselves: the Core Four. They were a group of friends who’d been together for more than two decades. Their origin story was both convoluted and utterly mundane, because, well, that’s how it is with friends.

They met in college at Johns Hopkins. Mitch and Alan had a chem lab together and became fast friends, mostly because they were the two worst students in the class. Megan was the bridge that linked the genders. She lived in Alan’s dorm and was way, way smarter than Alan and Mitch, so she helped them through their dreaded science requirements in exchange for occasional access to Alan’s Honda Accord. Sarah worked with Megan at the campus bookstore, where they bonded over Margaret Atwood while selling Hopkins hoodies. They scored a couple of fake IDs sophomore year and hit the Greene Turtle one night after work, where they ran into Alan, who’d just smuggled Mitch in through the back door.

Mitch had a minor crush on Megan—­a three on a scale of ten—­but he never acted on it because Megan called him “buddy” whenever possible and clearly thought he was a bit of a doofus. Sarah could’ve been persuaded to like Alan if the stars had aligned, but they never did, even in the face of so much casual drunkenness, which was a sign that it was simply never meant to be. Consequently, Mitch, Alan, Megan, and Sarah became one of those flirty but platonic little cohorts that are the foundation of any decent college experience.

And then Alan met Doug while playing intramural basketball. Doug was lights out from three-­point range—­a natural-born athlete—­but he couldn’t dribble to save his life. He joined the group from time to time at trivia night in the rec center, and became a permanent fixture one Thursday when they all went to a Counting Crows concert at the last minute in D.C. and had a blast. Sarah and Doug made out during the song “Mr. Jones” and became the group’s first couple.

Terry, who had a part-­time job at Doug’s favorite used-­music store, started showing up, too. Terry lived in a house off campus and had a seemingly endless supply of vintage concert T-­shirts, which was cool, and he had the best sideburns that any of them had ever seen, straight out of Beverly Hills 90210. Sideburns, like Counting Crows, were a thing people talked about a lot in the nineties. Terry was an indie alternative to the typical preppy Hopkins guy, and Megan was into it right away. They started dating almost immediately.

Amber and Jessica were late additions to the group, recruited during blurry nights out in the city. Mitch saw Jessica at a bar in Canton and was instantaneously dazzled by her, despite her enormous flannel and her complete indifference toward him. Mitch famously told Alan later that night that he was “gonna make that girl love me if it’s the last thing I ever do.” A few months later they were all at a house party in a sketchy neighborhood near Camden Yards when in walked Amber. “Wow, look at her!” Alan yelled over the music—­as smooth as ever.

They paired off over the sixteen months leading up to the end of their senior year: Megan with Terry and Amber with Alan in 1998, and then Jessica with Mitch and Sarah with Doug in 1999. Henceforth they were officially the Core Four. And, like any group legit enough to have its own name, they did everything together. This eventually included graduating, becoming gainfully employed, and getting married.

Megan and Terry and Sarah and Doug had their weddings a few months apart in the summer. Both ceremonies were lovely, featuring epic toasts, discarded bow ties, and, in Megan and Terry’s case, a break-­dancing ring bearer.

Alan and Amber had an ill-­advised winter ceremony: always a dicey proposition in the Northeast. An ice storm a few hours before the rehearsal dinner tested everyone’s resolve, particularly that of the caterer, whom everyone later agreed had to have been on some kind of mood stabilizer.

Jessica and Mitch’s wedding was last, in the spring, on Fenwick Island in Delaware, and it was perfect. Well, almost perfect. Two seagulls destroyed the wedding cake during the reception, but the guests were all drunk by then, so everyone would remember it as hilarious.

The Core Four drank together in an endless loop of Fourth of Julys and New Year’s Eves and Halloweens and charity bar crawls in the city.

They waited a while to have kids, the Core Four, because what was the rush? And when they finally did, all the Wives but Amber got pregnant in unison. The little ones learned to walk together, wrestled in rented bouncy houses at sweaty birthday parties, and started pre-­K at the same time.

Then, when it was time—­when parking hassles and crime rates got to be too much—­they all moved to the suburbs the same year. Their houses formed an odd square that covered 5.4 miles in the wooded suburbs of Baltimore, Maryland.

They celebrated holidays as a group. They watched the Oscars together. They all got dressed up and went to the Preakness. Their lives were intertwined, their experiences collective and referenced in first person plural—­the royal “we.” They had keys to one another’s houses. They knew one another’s garage codes and secrets. They were a big, sprawling, man-­made modern American family.

And now that family was broken. By every reasonable standard of measurement, they were adults. Yet, one by one, they failed at the most basic adult institution of all.

Megan and Terry were the first to go down.

Their breakup was a surprise but, looking back, not a surprise surprise, because, quite honestly, they seemed to love each other the least. Still, everyone was pretty shaken up by it. The group’s reaction, collectively, was: Holy shit. Megan and Terry? Are you serious?

Typically in divorce situations, everyone immediately blames the guy. Well, in this case, everyone was right. There was a woman on the side—­younger, of course. There was a secret credit card, a secret email address, even a secret Skype account, which, technologically speaking, was pretty old­school. After the divorce, Terry moved to an elaborate apartment downtown and bought the most enormous flat-­screen TV he could find. It arrived in a cardboard box the size of a Ping-­Pong table.

The other woman—­the younger one—­was out of the picture by then. She liked Terry and all, and she’d had a lot of fun, but not enough, it turned out, to leave her husband and family in Roland Park.

Sarah and Doug were next.

This one actually was a shocker. Of all of them, Sarah and Doug seemed most likely to make it. For starters, they were the best-­looking of the group—­the perfect aesthetic match. Sarah was naturally blond and dabbled in Pilates and yoga. Doug had wavy, effortlessly good hair and great arms. They were the kind of attractive that if you didn’t know them, you’d assume they had to be monsters. They weren’t, though. They were just normal people who happened to look like they belonged in a commercial for home exercise equipment.

The real kicker, beyond their mutual hotness, was that they genuinely seemed to love each other. They kissed in public. They still held hands at movies. He sent her flowers sometimes, just for the hell of it, and she said adorable things about him on Facebook, which was sweet, even though it grossed a lot of people out.

The infidelity thing in their case was more complicated than in Megan and Terry’s situation. It was a whole “marriage in the age of the Internet” kind of thing. Sarah started communicating with a long­lost ex-­boyfriend on Instagram, which devolved into sexy Twitter DMs. While this was happening, Doug was in the throes of a full-­scale email romance with his work wife from the accounting department. The phrase “emotional affair” was introduced and debated extensively in the group. Quiet betrayals were made. Cracks in the foundation were formed. Then the whole thing came toppling down.

When Sarah and Doug announced via group text that they were splitting, too, it felt like when a great restaurant boards its windows in the middle of the night and suddenly no longer exists.

The group’s reaction this time was something just shy of full-­blown panic. Jesus H. Christ. You guys. What’s happening to us? 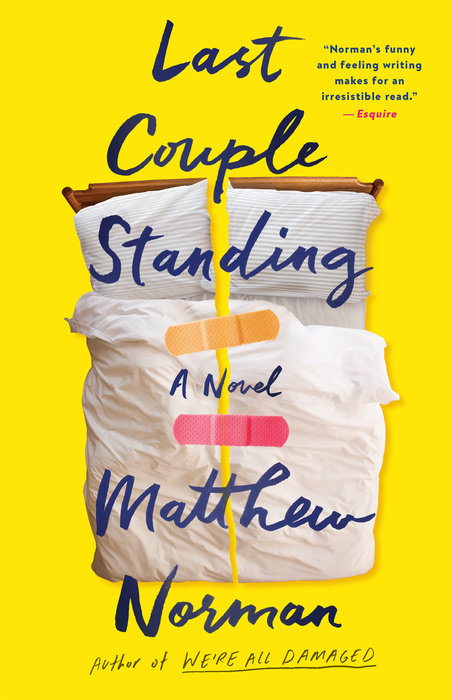