A dying man brings his oldest friends together for one last beach blowout in this witty, heartfelt novel from the author of Last Couple Standing.

“A delightful novel about the meaning of friendship and how we dream of being remembered by those closest to us . . . a fabulous vacation of a book!”—Amanda Eyre Ward, New York Times bestselling author of The Jetsetters

At just thirty-five, reclusive billionaire Robbie Malcolm is a renowned financial prognosticator, a celebrated philanthropist, and a mathematical genius. Also, he’s dying, which is a fact he’s carefully concealing from the world.

As he takes stock, Robbie realizes that his wealth means nothing if he can’t help the people who matter most. So he invites his oldest friends—Blair, Cat, and Wade—to their beloved Fenwick Island on the coast of Delaware to share his secret and to reveal plans for each of them that he believes will change their lives forever.

However, Robbie isn’t the only one with secrets. The bonds the friends formed as teenagers still exist, but adulthood has brought a whole new set of complications, like unrequited loves, marriages on the brink, and so much unfulfilled potential. Robbie’s plans may look good on paper, but are they any match for the utter disaster that is real life?

As everything comes to light over a wild weekend full of surprises, Robbie learns there are still some things money can’t buy, and a group of friends who thought their best years were behind them realize just how much they have to look forward to.

An excerpt from All Together Now

Blair Harden is sitting in the sort of traffic you usually associate with movies about the end of the world. The cars are stacked in tight rows on U.S. Route 50 East. Occasionally, there’ll be a brief stretch of open road—­like a prison break—­but then everyone slams on their brakes again.

Blair looks up through the windshield and imagines a meteor approaching. It enters the atmosphere through the clouds, cuts across the sky, and then blows everything up. Boom.

He’s not addressing anyone in particular, Blair knows. This is just what her husband does: he talks to traffic.

“We should’ve left earlier,” Blair whispers. This couldn’t be less helpful, but she says it anyway, because, well, marriage. Martin squeezes the steering wheel in response.

They’ve opted to drive themselves to Fenwick Island instead of accepting Robbie’s offer of a car. This made sense at the time, but it’d be nice now, Blair thinks, to be cradled in whatever luxurious thing Robbie would’ve sent for them. They’ve been on the road for nearly an hour now, but they’re barely out of D.C., and the minivan smells like Goldfish crackers and melted crayons.

Martin taps the dashboard screen, flipping from ’90s on 9 to ’80s on 8. It’s an entirely symbolic gesture. The volume is so low that neither of them can hear it, because five-­year-­old Kenny is passed out in his car seat, and everyone in the vehicle knows that waking him for anything short of a car fire would be a catastrophic mistake.

There’s another minivan in front of them. It’s maroon, and it has a bumper sticker that says I Used to Be Cool. It’s the same model as the minivan Blair and Martin are driving: a Honda Odyssey. Their Odyssey is Lunar Silver Metallic, which is just a fancy way of saying gray. Buying a minivan was another thing that made sense at the time, but now Blair hates the Odyssey more than any other single object in her life.

Blair holds her finger to her lips, and Michelle frowns.

Correction: the Baltimore Prep Rejects are best friends. Tense is tricky when you’re in your thirties and you’re talking about people from high school, but ask any one of them who their best friends are and they’ll list one another, despite the fact that they’re scattered all over the country now and haven’t all been in the same room in six years.

Blair McKenzie, Cat Miller, Robbie Malcolm, and Wade Stephens earned their nickname the first week of June in their senior year at Baltimore Catholic Preparatory High School. One week before graduation, three of them were expelled, one of them dropped out in solidarity, and the Baltimore Prep Rejects were born.

Blair looks back now at the twins. Michelle is focused on her iPad, and Kenny is sleeping so hard that his head looks like it’s on sideways. Blair takes out her phone and scrolls back through the group’s text chain from two weeks ago.

She was standing in the kitchen wearing yoga gear when Robbie’s invitation arrived. It was hand delivered and expensive looking, with gold foil on fancy card stock. The Malcolm Capital logo had been pressed into a red wax seal on the envelope, like on a bottle of fancy scotch. Blair read it and immediately texted Cat.

Hey. Did you get this thing from Robbie?

It took two hours for Cat to reply, which was typical. Cat lives in L.A., so she’s always dropping in and out of text chains at weird hours, like she’s beaming in from a different dimension.

Just got it. You going?

Blair replied that she didn’t know yet. Then she asked, You?

I’ll talk to Martin about it, wrote Blair.

Cat replied, Lame! Then she wrote, That’s why I don’t have a husband. I like being totally in charge.

Blair wrote back, Wait, THAT’S why you don’t have a husband? She smiled when she saw Cat’s reply, which was two dancing girl emojis, a unicorn, and a rainbow. Blair couldn’t remember if Cat was seeing anyone. She didn’t want to ask, though, because it would’ve highlighted that they hadn’t spoken in a while, so, instead, she replied, Miss you, to which Cat sent a little cartoon heart.

A few hours later, after Blair had picked up the twins from school, she texted Cat again. Do you think Wade will go?

Cat wrote back, I don’t see why not. Wade likes a free party as much as this girl.

Maybe we should text him, Blair wrote, going for casual. Cat, however, saw right through it and replied with an eye-­roll emoji. You mean, maybe I should text him?

Blair didn’t respond. She didn’t know what to say. A few minutes later, though, Cat texted again, and this time she included Wade.

Wade? Fenwick? You in?

For a while, nothing. Blair kept glancing at her phone to see if she’d missed a text. She cut carrots for the twins. She helped them with their reading flash cards. She pulled a piece of carrot out of Kenny’s nose. Wade’s reply came as she was loading the dishwasher.

It’s bullshit that Cat gets a plane. I want a plane.

Cat chimed in immediately. So that’s a yes?

I guess, wrote Wade. Should I be embarrassed that my calendar is so open?

This was rhetorical. At least that’s how Cat took it, because she wrote, Wade and I are in. What say you, Blair Bear?

Blair could’ve asked Martin. She could’ve called him at his office and explained the situation. They could’ve discussed it, like healthy married couples are supposed to do. Instead, she wrote, We’re in!

Cat sent a gif of a cat wearing a bikini, and it was settled. The Rejects were headed back to Fenwick Island.

Blair looks back again. Such an odd instinct of motherhood: this need to constantly check on your kids, like she’ll suddenly find them chugging wine coolers and smoking unfiltered cigarettes.

The trip started with a mini Taylor Swift marathon. Michelle and Kenny are on a huge Tay-­Tay kick at the moment, particularly the song “Shake It Off,” which they played on repeat nine times after Martin pulled out of the driveway. Nine times. Thirty-­three minutes of “Shake It Off.” It was a strategic move to allow it, though. Whenever the chorus plays, Kenny throws himself from side to side against his car seat restraints. By the seventh time through, he’d danced himself to unconsciousness.

Martin changes lanes and shifts in his seat. This lane isn’t going any faster than the one they just left. “You’re sure you want me there this weekend, right? Like, sure sure?”

Martin has asked her this at least five times in the last two weeks, most recently an hour ago as they loaded Peppa Pig floaties into the Odyssey. “Yes,” she says. “I am.”

Brake lights reflect off his sunglasses.

“They’re my best friends,” she says. “They’ve never even met you. The twins either.”

“I know,” he says. “But the kids’n I, we could’ve stayed home, given you some adult time. I wouldn’t have minded.”

Blair sighs and checks Michelle and Kenny again. This time, she sees Taylor Swift, all lanky and annoyed, sitting in the wayback, shaking her head. Blair has been doing this lately: she’s been imagining that Taylor Swift hangs out with them, because when you listen to the same song over and over, you lose some of your mind. Imaginary Taylor Swift shoves Michelle’s pink duffel. He doesn’t get it, Blair. He just doesn’t.

Imaginary Taylor Swift is right; Martin doesn’t get it. Which is why Blair nearly asks him, “Did you ever stop to think, Martin, that maybe this will be good for us? For our marriage?” Instead, she reminds him that he and the twins were specifically invited. “It’d be rude for you not to come,” she says.

His hand moves to the display screen again, like he’s going to adjust the volume, but he thinks better of it. “Do you think I’m going to feel old, though?” he asks. They pass a fender bender—­two SUVs on the shoulder, flashers flashing.

“You brought your walker, right?” Blair asks. “You know how your hip acts up in this humidity.” 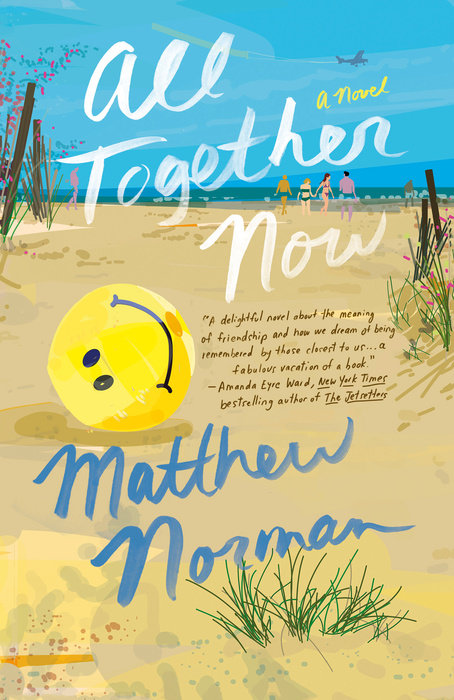