Why did the founder of a glamorous coworking space for women disappear? Her best friends will risk everything to uncover the truth in this “propulsive thriller” (Marie Claire) from the New York Times bestselling author of the Reese’s Book Club pick We Were Never Here.

As CEO of the Herd, an elite women-only coworking space, Eleanor Walsh seems to have it all: close friends, a sweet husband, and the most glamorous and successful female-empowerment-based company in New York City. Then she vanishes on the night of a glitzy press conference—and the police suspect foul play.

For Hana, the head of PR for the Herd and Eleanor’s best friend, this is a nightmare. For Hana’s sister, Katie, a journalist, this is the story that will make her career. But when the sisters launch their own investigation and begin to learn what Eleanor was hiding, they must also face the secrets they’ve been keeping from each other—and confront just how dangerous it can be when women’s perfect veneers start to crack.

An excerpt from The Herd

My body tensed before I knew what I was seeing: strobes of red and blue, the universal sign of an emergency. I paused and squinted at the squad car across the street, its lights flashing, eerier for the lack of a siren. I breathed deeply, commanded my chest to relax. Two weeks back in New York City, and despite everyone’s warnings, the sounds, the smells, the crush of people and hulking cliffs of steel and glass—­none of it bothered me, none of it took any reassimilation. But this was the first manic police light I’d seen, and like Pavlov’s bell it’d made every muscle tighten.

I crossed the street and realized the two cops standing bored on the road weren’t just blocking my entrance—­they appeared to be at the Herd, speaking to a wisp of a woman in an impressively flattering parka. I leaned forward and flashed my widest smile.

“Excuse me, I’m so sorry to interrupt.” They flicked their heads my way, annoyed. “It’s okay for me to go in?” I pointed at the door behind them.

“Are you a member?” the woman asked.

“I have an appointment with Eleanor.” She raised her eyebrows and I sighed. “I’m Hana’s sister.”

She took a half step back. “Oh, go on up. The Gleam Room’s closed but everything else is, uh, business as usual.”

I thanked her and hurried out of the cold to wait for the single elevator. The Gleam Room? What the hell is a Gleam Room?

On the tenth floor, the doors slid open and I stepped out into a sunlit entryway. I paused, momentarily stunned. I’d seen the floor shortly after Eleanor had first rented it, had even donned a hard hat and closed-­toe shoes for a tour shortly before I’d left town, but that hive of dust and drywall and sweaty contractors had little in common with the space before me. It had the girly chicness of a magazine office, but without the clutter or bustle—­here everything was calm. Sunlight spilled in from the windows; it was warm but not stuffy, and the air smelled vaguely of plumeria. A woman with glossy French-­braid pigtails and molded spectacles smiled at me from behind a marble-­fronted desk. On the wall behind her was the now-­famous logo: the herd, the H-­E-­R a deep plum, the other letters gray.

She checked me in, had me scribble my finger across an iPad in the wild snarl I counted as my signature, and then she gestured ­toward the nearest lounge. “Eleanor will get a notification that you’re here,” she said brightly, touching off a little chirrup in my chest. “Feel free to take a seat.”

I thanked her and stepped inside the room, which was ringed with forest-­green booths and benches, a few sofas and armchairs clustered at the center. I peeled off my coat and sent a text: “You here?”

I heard Hana before I saw her, her heels clacking along the parquet floor. Hana enters any room like Lily Tomlin in an ’80s office comedy. “Katie!” she cried, arms wide.

“I take back everything I said,” I said into her shoulder. “This place is unreal, Hana. I feel like I’m inside Athena’s vagina.”

She cracked up and let me go, then took a step back. Evaluating. “That’s the Katie I know,” she said, tapping my shoulder. “You’ve been off your game the last couple of weeks. I was beginning to worry Kalamazoo had permanently killed off your sense of humor.”

Ah yes, Hana coming in hot with the thinly veiled criticism. “Don’t scapegoat Michigan. I’ve just been getting my bearings.” I looked beyond her. “Is Mikki here? Oh, and do you know what’s going on this morning? There are cops by the door.”

She frowned. “Somebody broke in last night. Spray-­painted some obscenities in the Gleam Room.”

I held up a finger. “Is that a fancy term for the bathroom? Because I will not abide that nomenclature.”

She laughed. “It’s a beauty room with mirrors. You can hire someone to do your hair or makeup or just use the products there, like, if you have a meeting or audition or date to go to.”

A few members had floated by, all perfectly coiffed and clad in stylish, breezy outfits. “Good, ’cause everyone here looks like shit,” I remarked.

A woman with a black bun the exact size and shape of a bagel paused behind Hana, leaning in expectantly. Hana noticed her and jumped.

She looked younger than me, early-­twenties, impossibly chic in a tailored black jumpsuit. A radiant smile, teeth like pearls. “So you’re Hana’s sister!”

It clicked—­she was the woman I’d seen out front. I shook her hand enthusiastically, and she didn’t do the annoying double take we often get when people learn we’re siblings: the back-­and-­forth between Hana’s thick, dark hair, golden-­brown eyes, and dark skin and me, as bland as a cornfield.

“Eleanor mentioned you were coming,” she said. “You just moved back, right?”

“She was researching a book in Michigan,” Hana jumped in. “She’s a journalist.”

I’d been practicing this on the subway ride here: “There’s this small technology company there that sort of stumbled into the lucrative world of reality manipulation: fake news, convincing bots, that kind of thing. I wrote a feature about them for Wired and now I’m expanding it into a book.”

“That’s so interesting.” Something in her eyes unsettled me, a quivering intensity. “Eleanor and I were just talking about the falsity of the online world, and how everyone’s craving real connection. She said—­”

“I’m so sorry, but she has an interview!” Hana’s teeth gleamed as she sent Aurelia away. When she’d gone, Hana shrugged. “She’s sweet, but she’ll talk your ear off. I want you focused before your big Herd interview.”

“Hopefully Eleanor will go easy on me.” I glanced around. “I think people are looking at us. Are you and Mikki basically celebrities?”

Hana rolled her eyes, but I could sense her pride. The Herd employed Hana as its part-­time publicist, and Mikki, another of their friends from Harvard, was its freelance graphic designer. More important, the two freelancers were Eleanor’s confidantes, part of her tiny inner circle. Now everyone in the room was feigning disinterest in us, too subtle to gaze at Hana head-­on; instead they tilted their high cheekbones and typed rapidly into their keyboards.

“Anyway, make yourself at home. I’ll find Mikki.” She took off, her heels ticking.

I strode after her and peered into the next room, the one that’d just swallowed her up. White bookshelves stretched from corner to corner, the books organized by color. So neatly aligned I wanted to shove one out at an odd angle, fling a few books onto the floor just to see what would happen. Farther in there was a vast, sunny room, and off to the side, a short hallway plastered in hip wallpaper—­a pattern of illustrated red lips smirking and smiling and sticking out their tongues. Someone had sealed off the hallway with a strip of Scotch tape, a Post-­it in the middle proclaiming closed for a minute! The Gleam Room. I wondered again what was scrawled across its walls—­what merited the squad car out front.

Then Hana and Mikki burst in from the sunny room, marching out to meet me near the doorway. When she hugged me, Mikki smelled the way I remembered, sweet and a little musky. Winter be damned, she was wearing a crocheted halter top and loose pants covered in an elephant print, her feathered ’70s-­style hair in crumpled curls, her face bare.

“For f***’s sake, Hana, why didn’t you offer to take her coat?” Mikki pulled at the leather jacket slung over my forearm. “C’mon, let me give you the tour and then I want to hear all about Minnesota.”

“Shit. This is how badly I need an update.” She grinned, freckles dancing on her cheeks, and spun toward the sunlight at the far end of the space. I’d hoped to see Mikki a couple weeks ago; she’d hosted a big “Misfit Toys Friendsgiving” in her rent-­controlled, ramshackle apartment. But when the day had come, I’d been too tired and disoriented to attend.

Hana announced she had to answer some emails and split off as Mikki pointed out a chic café counter along a wall, avocado toast on vintage-­looking plates sliding across its marble top: “Coffee is free, but everything else is expensive.” She bopped along, smiling serenely, oblivious to the Herders stealing glances at us as we passed. Mikki’s superpower is that she very rarely cares—­about anything, really. When I’d announced my book deal on Facebook—­my most-­liked post to date—­she’d commented only to say the CEO of the company I was writing about was sort of hot. At the time, it had stung, but now her cheerful indifference was a relief: one less person pressing me about my research, the months that got bunched up and knotted and ended with ambulances, with sirens chopping the air.

Andrea Bartz is a Brooklyn-based journalist and New York Times bestselling author of We Were Never Here, The Lost Night, and The Herd. Her work has appeared in The Wall Street Journal, Marie Claire, Vogue, Cosmopolitan, Women's Health, Martha Stewart Living, Redbook, Elle, and many other outlets, and she's held editorial positions at Glamour, Psychology Today, and Self, among other publications. 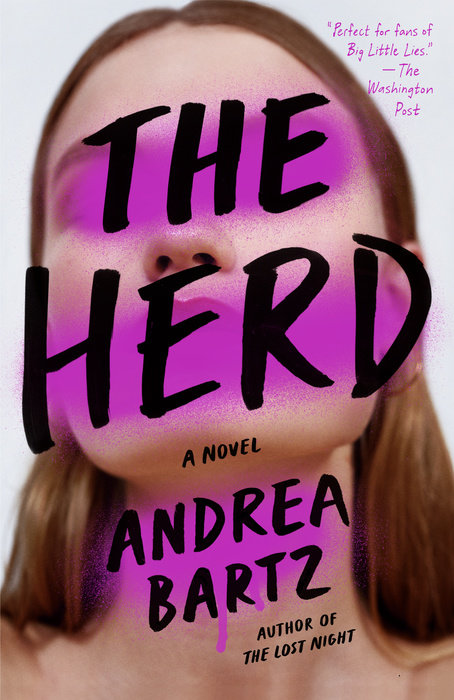