The Great Migration and the Black American Dream

A powerful illustrated history of the Great Migration and its sweeping impact on Black and American culture, from Reconstruction to the rise of hip hop.

Over the course of six decades, an unprecedented wave of Black Americans left the South and spread across the nation in search of a better life--a migration that sparked stunning demographic and cultural changes in twentieth-century America. Through gripping and accessible historical narrative paired with illustrations, author and activist Blair Imani examines the largely overlooked impact of The Great Migration and how it affected--and continues to affect--Black identity and America as a whole.

Making Our Way Home explores issues like voting rights, domestic terrorism, discrimination, and segregation alongside the flourishing of arts and culture, activism, and civil rights. Imani shows how these influences shaped America's workforce and wealth distribution by featuring the stories of notable people and events, relevant data, and family histories. The experiences of prominent figures such as James Baldwin, Fannie Lou Hamer, El Hajj Malik El Shabazz (Malcolm X), Ella Baker, and others are woven into the larger historical and cultural narratives of the Great Migration to create a truly singular record of this powerful journey.

An excerpt from Making Our Way Home

Growing up, I often wondered what had happened during the years between the end of chattel slavery and the start of the Civil Rights movement. I often joked that Black people disappeared from the face of the earth during World War I and World War II only to return with music, afros, and righteous indignation in the late 1950s. In reality, Black Americans have been present throughout every chapter of American history, having served in every war in which America was involved and contributing to the culture, economy, and very identity of the United States. To put it plainly, the story of America is incomplete if it is told absent the story of Black America. That truth may feel very obvious to us, but the creators and curators of many American history courses, textbooks, museums, and works of media frequently ignore this vast community and its myriad contributions. When history reflects only white men and their victories, it becomes difficult for everyone else to feel as if they, too, can be victorious. Very few Americans are even aware that over six million Black people moved across the United States from 1910 to 1979 in a period known as the Great Migration. Perhaps you learned about the Great Migration from family accounts, history class, or Isabel Wilkerson’s foundational text The Warmth of Other Suns. Perhaps you are just now learning about it.

During the Great Migration, Black Americans surfed the cresting waves of a cultural crescendo. Not only did we move—in 1910, Detroit had a population of 5,700 Black people, which boomed to 120,000 less than thirty years later—we told our stories and rallied against the notion of shame in our Blackness. White society changed our names from slurs to Coloreds to Negros to Afro-Americans to Blacks. We wrote books. We made art. We made music. We fought. We lost. We won. We survived. We made history.

Seeking a better future, millions of Black families uprooted themselves from the rich soil of the American South and relocated to the hardened asphalt and cobblestone streets of the North, Midwest, and West. Our families did this in a time before cell phones, the Internet, and global positioning systems. They did it as the racist specter of Jim Crow made it uncertain if they could even fill their trucks with the much-needed gasoline and food to fuel their journeys. But not all of them moved away. Many families stayed in cities like Houston, New Orleans, Jacksonville, and Atlanta, deciding, “Better the devil you know than the devil you don’t”—or, in other words, preferring to endure familiar racism and discrimination than find themselves uprooted and still at war with the devil of racism in another city.

For the six million individuals who did move, such a decision was not made on a whim. Extensive research and interviews reveal that there were two primary reasons families migrated during this time period: to pursue jobs and to seek refuge from domestic terrorism. Economic hardship down South and the promise of jobs up North drew Black people to new cities like Detroit, New York, and Chicago. Pillars of American capitalism relied on Black newcomers from the South to maintain the output of automobiles and building materials that were fueling America’s rapid industrial growth. Unfortunately, these families that moved north and left the sharecropping fields for the assembly lines encountered horrific working conditions and endured long working hours.

My own family moved from Little Rock, Arkansas, to Los Angeles, California, following the lynching of Willie Kees in 1936. Lynchings had become an extremely common form of mass intimidation, and following this particular lynching, the Ku Klux Klan threatened any Black person who dared to resume their daily routine. My great-grandfather, Vernon Dunlap, whom I knew as Big Daddy, defiantly went to work the day following the lynching despite the threat of violence from white supremacists. He was spotted on his way to work and, faced with the threat of being lynched himself, he was forced to leave his young family behind and headed west in the dead of night. About a month later, Big Daddy was able to settle in California. Shortly thereafter, he returned to Little Rock on a mission to evacuate his whole community and bring them as refugees to the promised land.

Many accounts of Black American history characterize our past as being shaped by hardship and suffering alone. While these are valid and sacred parts of our story, the historical record reveals that our legacies have been shaped by far more than pain and suffering. Making Our Way Home is a primer on the Great Migration for people of all ages and cultural heritages. Chapter one covers the post–Civil War period known as Reconstruction to 1919, and subsequent chapters each cover a decade of the Great Migration, providing an overview of the cultural changes that were occurring in America.

Black history is so much more than the snapshots that white institutions allow us to hold on to. It is time we pull away the cover obscuring the rich history of Black America during what has come to be known as the Great Migration. From the time of Reconstruction to the birth of hip-hop, millions of Black Americans moved across—and fundamentally changed—the United States to forge a better future.

Blair Imani is a critically acclaimed historian, author, educator, and influencer. The New York Times praised her unique ability to create “progressive lessons with vibrant visuals and a perky, quirky delivery.” Her viral microlearning series Smarter In Seconds demonstrates her signature style of making abstract concepts more concrete in a well-researched, well-presented, and concise manner. She is the author of Read This to Get Smarter about Race, Class, Gender, Disability, and More; Making Our Way Home: The Great Migration and the Black American Dream; and Modern HERstory: Stories of Women and Nonbinary People Rewriting History. Her work centers women and girls, global Black communities, and the LGBTQ community. As an educator and influencer, semi-retired organizer, and public speaker, Blair Imani is dedicated to making the world a better place and amplifying the voices and work of those fighting the good fight.

The Great Migration and the Black American Dream 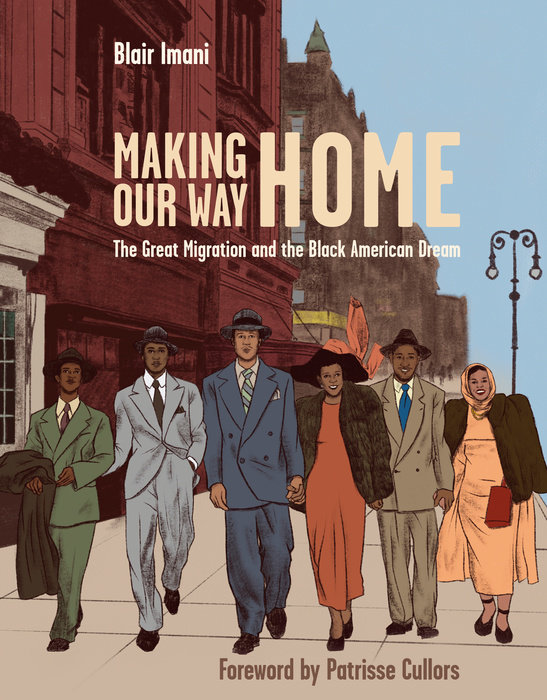