He was the first astronaut to orbit the Earth. Nearly four decades later, as the world's oldest astronaut, his courage reveted a nation. But these two historical events only bracketed a life that covers the sweep of an extraordinary century.

John Glenn's autobiography spans the seminal events of the twentieth century. It is a story that begins with his childhood in Ohio where he learned the importance of family, community, and patriotism. He took these values with him as a marine fighter pilot during World War II and into the skies over Korea, for which he would be decorated. Always a gifted flier, it was during the war that he contemplated the unlimited possibilities of aviation and its frontiers.

We see the early days of NASA, where he first served as a backup pilot for astronauts Alan Shepard and Gus Grissom. In 1962 Glenn piloted the Mercury-Atlas 6 Friendship 7 spacecraft on the first manned orbital mission of the United States. Then came several years in international business, followed by a twenty-four year career as a U.S. Senator-and in 1998 a return to space for his remarkable Discover mission at the age of seventy-seven.

An excerpt from John Glenn: A Memoir

Patriotism filled the air of New Concord, the small eastern Ohio town where I grew up. Memorial Day, the Fourth of July, and Armistice Day were flag-waving holidays of parades and salutes to the United States and to the soldiers, living and dead, who had fought for freedom and democracy.

My father was one of those soldiers. He served in France during World War I, delivering artillery shells to the front on trucks and horse-drawn caissons, and he came home partially deaf from a cannon blast but otherwise unharmed. He also was a bugler. He blew the bugle for reveille and taps, for mail call and mess call, and when the flag was raised.

At home, on those patriotic days that I remember, Dad was again called upon to play the bugle. He marched in the parade formations when the local veterans from the Thirty-seventh Ohio Division marched down Main Street on Armistice Day, and played the colors when they raised the flag at the American Legion hall at the end of the parade. But the bugling I remember best was the taps he played on Memorial Day. It was still called Decoration Day then, and families dressed in their Sunday best would regather at the town cemetery after the parade, carrying bundles of gladioli, irises, and peonies, red, white, and blue the dominating colors. The marching soldiers also would regather. They presented arms and fired three volleys in salute as the flags flanking the Stars and Stripes were dipped. Then my father raised his war-battered brass bugle and played those drawn-out, mournful notes in memory of the soldiers killed in action, and the sound drifted across the gravestones and sent chills up my spine. As the last notes faded into silence the families of the soldiers and descendants of men who had died in other wars moved among the gravestones and placed flowers on the graves.

We had a town band in New Concord. I was nine or ten when I joined the band and learned to play the trumpet. At home, Dad taught me the military calls. And one day after I learned to play them well enough, he came to me with a request. "Bud," he said, "Decoration Day is coming up, and I want you to play taps with me."

I hardly knew what to say. Dad was my hero. He had fought in the war. The playing of taps was a special moment in the ceremony, a final, haunting valediction for the men who had made the supreme sacrifice. To play it was a great responsibility. Dad obviously had a lot of confidence in me. That meant a great deal, but it meant even more to participate as a young boy in the remembrance of men who had fought and died for our country. It was something bigger than I was, something momentous.

Dad and I practiced at home as the end of May approached. He played in the kitchen, and I stood in another room. When the day came, I was a little scared. Before, I had always watched the parade with Mother and my sister, Jean, or marched in the band. But this spring day I went alone to the cemetery, ahead of the others. I walked across the sloping grounds, and waited out of sight in the woods where the terrain fell away beyond the graves.

Soon I heard "Present arms" as the soldiers' honor guard re-formed. Peeking through the leaves, I saw them raise their guns to fire the three volleys in salute. Then my father lifted his bugle, and the first sad notes rose in the spring air. The first phrase ended, and I was ready. I put the trumpet to my lips and echoed the clear notes. We played through taps like that, my trumpet echoing his bugle phrase by phrase, until the last notes died.

That impressed me then, as a boy, and it's impressive to me to this day. Echo taps still gives me chills. It recalls the patriotic feeling of New Concord, the pride and respect everyone in the town felt for the United States of America. Love of country was a given. Defense of its ideals was an obligation. The opportunity to join in its quests and explorations was a challenge not only to fulfill a sacred duty, but to join a joyous adventure. That feeling sums up my childhood. It formed my beliefs and my sense of responsibility. Everything that came after that just seemed to follow naturally.

A boy could not have had a more idyllic early childhood than I did. Sometimes it seems to me that Norman Rockwell must have taken all his inspiration from New Concord, Ohio. My playmates were freckle-faced boys and girls with pigtails. We played without fear in backyards and streams and endless green fields, and climbed trees to learn the limits of our daring. The adults--most of them--were concerned and reliably caring, and we respected them. Boys learned the company of men--the way they talked and held themselves, and their concerns--at the town barbershop and hunting in the woods. Saturday afternoons were for fifteen-cent sundaes at the Ohio Valley Dairy (nuts on top cost an extra nickel), Sunday mornings were for Sunday school and church, and Sunday afternoons were for family dinners and outings. These were the orderly rituals of my early years, and I never doubted even once that I was loved.

New Concord is the hometown I remember, but I was born a few miles away in Cambridge, in my parents' white frame house. The date was July 18, 1921. A doctor attended the birth. I weighed nine pounds and had my mother's red hair.

My father, John Herschel Glenn, had been home from the battlefields of France for two and a half years. He and my mother, a schoolteacher whose maiden name was Clara Sproat, had married just before he went to war. Mother was a very beautiful woman in some of the pictures made when she was young. She had a vivacious smile and lustrous hair, although its auburn tones were lost in the old photographs. They had met at the East Union Presbyterian Church near his parents' farm outside of Claysville. The farm was eighty or so acres, too small for anything but corn, garden vegetables, and a few hogs and chickens. She was from another little town not far away, Lore City. He had been seeing her for about two years, and I imagine he didn't want to let her get away. She rode a train to Montgomery, Alabama, where he was training at Camp Sheridan, and they got married on May 25, 1918. Two weeks later he left on a troopship from Newport News, Virginia.

John Glenn spent most of his life in public service, as a distinguished U.S. senator and a veteran of twenty-three years in the Marine Corps, during which time he was awarded numerous medals for his achievements. He was as well awarded the NASA Distinguished Service Medal and the Congressional Space Medal of Honor. He died in 2016.

Nick Taylor is the author of seven nonfiction books and collaborated with John Glenn on his memoir. He lives in New York City. 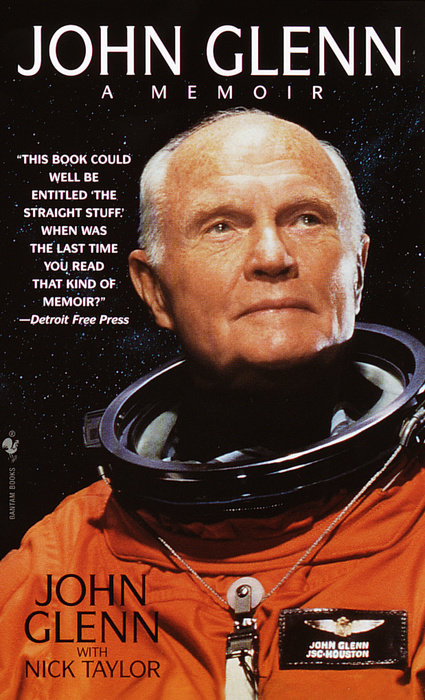