NEW YORK TIMES EDITORS’ CHOICE • A powerful, poetic memoir about what it means to exist as an Indigenous woman in America, told in snapshots of the author’s encounters with gun violence.

Toni Jensen grew up around guns: As a girl, she learned to shoot birds in rural Iowa with her father, a card-carrying member of the NRA. As an adult, she’s had guns waved in her face near Standing Rock, and felt their silent threat on the concealed-carry campus where she teaches. And she has always known that in this she is not alone. As a Métis woman, she is no stranger to the violence enacted on the bodies of Indigenous women, on Indigenous land, and the ways it is hidden, ignored, forgotten.

In Carry, Jensen maps her personal experience onto the historical, exploring how history is lived in the body and redefining the language we use to speak about violence in America. In the title chapter, Jensen connects the trauma of school shootings with her own experiences of racism and sexual assault on college campuses. “The Worry Line” explores the gun and gang violence in her neighborhood the year her daughter was born. “At the Workshop” focuses on her graduate school years, during which a workshop classmate repeatedly killed off thinly veiled versions of her in his stories. In “Women in the Fracklands,” Jensen takes the reader inside Standing Rock during the Dakota Access Pipeline protests and bears witness to the peril faced by women in regions overcome by the fracking boom.

In prose at once forensic and deeply emotional, Toni Jensen shows herself to be a brave new voice and a fearless witness to her own difficult history—as well as to the violent cultural landscape in which she finds her coordinates. With each chapter, Carry reminds us that surviving in one’s country is not the same as surviving one’s country.

An excerpt from Carry

On Magpie Road, the colors are in riot. Sharp blue sky over green and yellow tall grass that rises and falls like water in the North Dakota wind. Magpie Road holds no magpies, only robins and crows. A group of magpies is called a tiding, a gulp, a murder, a charm. When the men in the pickup make their first pass, there on the road, you are photographing the grass against sky, an ordinary bird blurring over a lone rock formation.

You do not photograph the men, but if you had, you might have titled it “Father and Son Go Hunting.” They wear camouflage, and their mouths move in animation or argument. They have their windows down, as you have left those in your own car down the road. It is warm for fall. It is grouse season and maybe partridge but not yet waterfowl. Despite how partridge are in the lexicon vis-­à-­vis pear trees and holiday singing, the birds actually make their homes on the ground. You know which birds are in season because you are from Iowa, another rural place where guns and men and shooting seasons are part of the knowledge considered common.

Merriam-­Webster’s Collegiate Dictionary defines in season in relation to timing, levels of fitness, and whether a thing is “legally available to be hunted or caught.” The first use of off-­season comes in 1847. Definitions include:

1: a time of suspended or reduced activity, especially: the time during which an athlete is not training or competing

2: a period of time when travel to a particular place is less popular and prices are usually lower

3: sports: a period of time when official games, tournaments, etc., are not being played

Magpie Road lies in the middle of the 1,028,051 acres that make up the Little Missouri National Grassland in western North Dakota. Magpie Road lies about two hundred miles north and west of the Standing Rock Reservation, where thousands of Indigenous people and their allies have come together to protect the water, where sheriff’s men and pipeline men and National Guardsmen have been donning their riot gear, where those men still wait, where they still hold tight to their riot gear.

Magpie Road is part of the Bakken, a shale formation lying deep under the birds, the men in the truck, you, this road. The shale has been forming over millions of years through pressure, through layers of sediment becoming silt. The silt becomes clay, which becomes shale. All of this is because of water. The Bakken is known as a marine shale—­meaning, once, here, instead of endless grass, there lay endless water.

Men drill down into the shale using water and chemicals to perform the act we call hydraulic fracturing or fracking. The water-­chemical mix is called brine, and millions of gallons of it must be disposed of as wastewater. In the Bakken in 2001, more than a thousand accidental releases of oil or wastewater were reported, and many more go unreported. Grass won’t grow after a brine spill, sometimes for decades. River fish die and are washed ashore to lie on the dead grass.

There, just off Magpie Road, robins sit on branches or peck the ground. A group of robins is called a riot. This seems wrong at every level except the taxonomic. Robins are ordinary, everyday, general-­public sorts of birds. They seem the least likely of all birds to riot.

When the men in the truck make their second pass, there on the road, the partridge sit their nests, and the robins are not in formation. They are singular. No one riots but the colors. The truck revs and slows and revs and slows beside you. You have taken your last photograph of the grass, have moved yourself back to your car. The truck pulls itself close to your car, revving parallel.

You are keeping your face still, starting the car. You have mislabeled your imaginary photograph. These men, they are not father and son. At close range, you can see there is not enough distance in age. One does sport camouflage, but the other, a button-­down shirt, complete with pipeline logo over the breast pocket. They are not bird hunters. This is not a sporting moment. The way time suspends indicates an off-­season moment. The one in the button-­down motions to you out the window with his handgun, and he smiles and says things that are incongruous with his smiling face.

The night before, in a nearby fracklands town, you stand, with your camera, in your hotel room doorway. You left Standing Rock for the Bakken, and the woodsmoke from the water protector camps still clings to your hair. You perform your fracklands travel protocol, photographing the room—­the bedspread and desk, the bathroom. In your year and a half of research for your novel, of driving and talking to women in the fracklands, you have performed this ritual, this protocol, dozens of times. Women are bought and sold in those rooms. Women are last seen there. You upload the photos onto a website that helps find women who are trafficked, who have gone missing.

The influx of men, of workers’ bodies, into frackland towns brings an overflow of crime. In the Bakken at the height of the oil and gas boom, violent crime, for example, increased by 125 percent. North Dakota attorney general Wayne Stenehjem called this increase in violent crime “disturbing,” and cited aggravated assaults, rapes, and human trafficking as “chief concerns.”

In a hotel in Texas, in the Wolfcamp Shale, you wake to the music of the trucks arriving and departing. This hotel is shiny tile and chrome bathrooms. It is a parking lot overfilled with trucks, with men from the fields who have an arrangement with management. An arrangement can mean flowers in a vase. An arrangement can mean these men pay for nothing, not even a room. In the morning, the parking lot is all trash can. Beer bottles and used condoms and needles, the nighttime overflow.

In a hotel in Texas, in the Permian Basin, you report to the front desk re: the roughneck in the room above. You dial zero while he hits his wife/his girlfriend/the girl he has just bought. You dial zero while he throws her and picks her up and starts again. Or at least, one floor down, this is the soundtrack. Upon his departure, the man uses his fist on every door down your hall. The sound is loud but also is like knocking, like hello, like Anybody home? You wonder if he went first to the floor above but think not. Sound, like so many things, operates mostly through a downward trajectory.

At a hotel where South Dakota and Wyoming meet, you are sure you have driven out of the Bakken, past its edge, far enough. The highway that night belongs to the deer, though they are not yet in season. All forty or fifty of them stay roadside as you pass. You arrive at the hotel on caffeine and luck. The parking lot reveals the calculus of your mistake—­truck after truck after truck, and a hotel clerk outside transacting with a young roughneck. Their posture suggests a shared cigarette or kiss or grope—­something safetied through vice or romance or lust. You’d take it. But here the posture is all commerce, is about the positioning of the body close so money can change hands. You are in a place that’s all commerce, where bodies never go out of season, where bodies are commerce only.

The men sway across the lot, drunk-­loud, and one says to the other, “Hey, look at that,” and you are the only that there. When the other replies, “No, I like the one in my room just fine,” you are sorry and grateful for the one in an unequal measure.

Toni Jensen teaches in the MFA programs at the University of Arkansas and the Institute of American Indian Arts. She is a 2020 recipient of a Creative Writing Fellowship from the National Endowment for the Arts, and her work has been published in Orion, Catapult, and Ecotone. She is Métis. 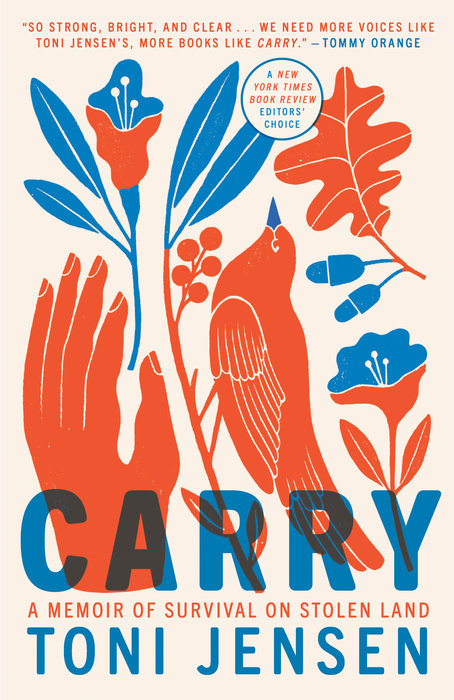