A groundbreaking exploration of the neuroscience of spirituality and a bold new paradigm for health, healing, and resilience—from a New York Times bestselling author and award-winning researcher

“A new revolution of health and well-being and a testament to, and celebration of, the power within.”—Deepak Chopra, MD

Whether it’s meditation or a walk in nature, reading a sacred text or saying a prayer, there are many ways to tap into a heightened awareness of the world around you and your place in it. In The Awakened Brain, psychologist Dr. Lisa Miller shows you how.

Weaving her own deeply personal journey of awakening with her groundbreaking research, Dr. Miller’s book reveals that humans are universally equipped with a capacity for spirituality, and that our brains become more resilient and robust as a result of it. For leaders in business and government, truth-seekers, parents, healers, educators, and any person confronting life’s biggest questions, The Awakened Brain combines cutting-edge science (from MRI studies to genetic research, epidemiology, and more) with on-the-ground application for people of all ages and from all walks of life, illuminating the surprising science of spirituality and how to engage it in our lives:

• The awakened decision is the better decision. With an awakened perception, we are more creative, collaborative, ethical, and innovative.
• The awakened brain is the healthier brain. An engaged spiritual life enhances grit, optimism, and resilience while providing insulation against addiction, trauma, and depression.
• The awakened life is the inspired life. Loss, uncertainty, and even trauma are the gateways by which we are invited to move beyond merely coping with hardship to transcend into a life of renewal, healing, joy, and fulfillment.

Absorbing, uplifting, and ultimately enlightening, The Awakened Brain is a conversation-starting saga of scientific discovery packed with counterintuitive findings and practical advice on concrete ways to access your innate spirituality and build a life of meaning and contribution.

An excerpt from The Awakened Brain

Nothing Could Have Been Done

A long, low howl broke the early morning quiet of the ward, followed by a scream. I rushed out of the cramped office where interns and residents filled out charts, ready to assist whoever was in distress. Before I could locate the source of the scream, a nurse hurried around the corner balancing a tray of bottles and sterile syringes and disappeared into a patient’s room. Soon all was quiet again. Fluorescent lights glared off the manila-colored walls and gray linoleum floors.

It was the fall of 1994. I’d recently finished my doctoral program at the University of Pennsylvania and had chosen a clinical internship as a psychologist at a psychiatric inpatient unit in Manhattan, part of a network of premier university hospitals at the epicenter of clinical advances in psychotherapy and mental health. Because the clinical approach and standard of care would have been similar at any other major American urban hospital, I’ll call the ward Unit 6. (All names and identifying details of the patients have been changed.) The patients on Unit 6 were diverse in ethnicity and age, many poor, many with rough lives and recurrent diagnoses, many also grappling with substance abuse. Sometimes they were brought to the hospital emergency room by the police against their will, to prevent suicide or homicide.

This wasn’t a top-choice hospital—patients with good insurance often went elsewhere—but it wasn’t a final stop, either. To come here wasn’t the equivalent of being “sent upstate,” the euphemism many medical staff and patients used to refer to a long-term mental illness facility in northern New York. Yet all of the patients I’d met here had been admitted and re-admitted numerous times, their files three or four inches thick. I was one of four interns on the ward, each of us serving two residents at a time, as well as a caseload of eight through our outpatient clinic. We started each day with a team meeting at eight o’clock sharp, the staff of psychiatrists, psychologists, social workers, nurses, and aides gathering around a table to hear updates from the night before—what the patients had eaten, how they’d groomed and slept, if there’d been any behavioral episodes. “Mr. Jones was malodorous,” an aide would report. “Ms. Margaret refused dinner.” Basic health and grooming habits can be tied to aspects of mental health—yet it always struck me as odd that on a ward dedicated to the healing of inner struggle we spent so much time talking about the physical body. Most patients wore hospital gowns, not street clothes, as though they were at the hospital for surgery or for treatment of a physical illness that required them to stay in bed.

I’d noticed the same phenomenon the first time I set foot on a psychiatric ward in the mid-1970s, when I was about eight years old. My beloved Grandma Eleanor, who had commuted back and forth from Iowa all the way to the University of Chicago to study psychology, took me to visit her dear friend who’d been hospitalized, someone she’d grown up with and stayed close to over the decades. The friend was not actually related to me, but I’d always known her as Aunt Virginia. In the hospital, I was confused to discover that she didn’t appear to be sick. She wasn’t wearing any bandages that I could see. She wasn’t hooked up to any machines. She had a radiant smile, a knowing sense of humor. And yet, like the other patients on her floor, with pain visible in their faces, or eyes gone distant, she was confined to a narrow bed in a small room. I was struck by the suffering I sensed in many patients there, and by how isolated Aunt Virginia and the others appeared. Later, I would learn that Grandma Eleanor was known for a legacy of activism, working constructively with state hospitals to bring psychotherapy to patients in institutions where they were only being injected, or put in straitjackets, or given shock therapy, and that she advocated for patients like Aunt Virginia to be moved to eldercare homes where they could receive ongoing medical attention while also enjoying a greater sense of community and support.

In many ways, mental health treatment standards had considerably improved in the twenty years since I’d visited Aunt Virginia. The thirty-five patients on Unit 6 weren’t restrained in straitjackets, or locked up and forgotten. We operated as a therapeutic community, patients participating in large and small psychotherapy groups each week, as well as short daily check-ins with their assigned doctor. The residents could move freely on the ward and engage in conversation or activities in the community room. The staff had top-notch training and cared deeply about the patients.

Our psychological treatment model was primarily psychodynamic. We’d been trained to help patients comb the past for insights and awareness that could release their present suffering. If patients could understand their anger or childhood wounds, the theory went, they could release them and no longer be controlled by them. The way out of suffering was to face suffering and gain insight. To excavate painful memories and experience discomfort in order to advance awareness.

On the psychiatric side, the ward took a psychopharmacological approach, using medications to ameliorate or eradicate symptoms. I was grateful for the medications that provided relief to patients in acute pain. Yet in my first weeks on the ward I began to wonder if we could do more to support patients’ long-term healing, to interrupt the constantly revolving door between in- and outpatient services.

After the morning team meeting, the interns would go see our individual patients, stopping by their rooms or finding them on the unit to see how they were doing. I wondered what it was like for patients in their forties, fifties, sixties, and older, who’d suffered for decades, who were on their sixth or seventh admission to the ward, to have a twenty-six-year-old intern who’d been practicing for all of three weeks show up unannounced for a twenty-minute conversation, the young intern in professional clothes, the seasoned patient in a flimsy, open-backed gown, knowing the whole process would begin again in six months when the current batch of interns left to begin their next rotation. Did we really know more about the nature of our patients’ suffering than they did themselves? Might there be a different path? A way to analyze and pathologize less, and hear more?

As summer bent toward fall, the more frustrated I became with an approach that seemed unhelpful at best, and, at worst, a tragic dead-end. We could offer a temporary, medication-induced reprieve from painful symptoms, or a slightly better understanding of why a childhood trauma had been so derailing. Neither outcome promised real healing. And when a patient opened up with an authentic expression that didn’t quite fit our psychoanalytic mold, we sometimes shut the door.

I co-led a weekly group with a fellow intern who had a strong, verging on inflexible, theoretical view. He thought the purpose of group psychoanalysis was to interpret and release our projections. He wanted patients to interpret what they made of one another and see how they misunderstood one another as projections of their injured psyches. One week a woman who was diagnosed with schizophrenia stepped outside the choreography. “I love to pray,” she said, “but when I’m having symptoms and I try to pray, I don’t hear my prayers the same way.” I turned toward her. “Wow,” I said, leaning in, inviting her to say more. But the other intern cut her off. She tried to speak again and he waved his hand impatiently, dismissively. The room grew quiet. “So you see me as what?” he said. “A bully? Do you see me taking control?” Somehow the patient was supposed to figure out he wanted her to interpret how she saw him as a projection of a feeling or experience from long ago. To this day I regret that I didn’t push back and hold space for the patient. That I didn’t turn to her and say, “What were you saying about your prayer life?” I decided I would never let the door be closed on patients again. That if they opened a door, I would hold it open.

It sometimes seemed that instead of helping patients get better, we were making them worse. Reinforcing a burden. Handing them a deterministic perspective. Teaching them that the sum of their lives would never amount to more than the effects of whatever terrible, inescapable thing might have happened in the past. That the best they could hope to achieve was a clearer understanding of how they’d suffered, and of how their suffering had written the rest of their lives. The bulk of our patients returned to the ward multiple times over the course of decades, one psychoanalytic therapist after another helping them construct a more and more entrenched narrative of how they had been broken by what had happened when they were young.

Lisa Miller, Ph.D., is the New York Times bestselling author of The Spiritual Child and a professor in the clinical psychology program at Teachers College, Columbia University. She is the founder and director of the Spirituality Mind Body Institute, the first Ivy League graduate program in spirituality and psychology, and for over a decade has held joint appointments in the department of psychiatry at Columbia University medical school. Her innovative research has been published in more than one hundred empirical, peer-reviewed articles in leading journals, including Cerebral Cortex, The American Journal of Psychiatry, and the Journal of the American Academy of Child and Adolescent Psychiatry. She lives in Connecticut with her husband and three children. 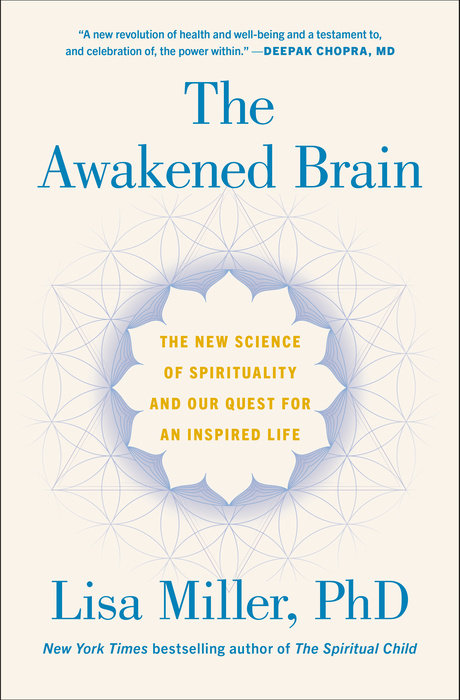