The Benefits of Connecting in a Suspicious World

A “meticulously researched and buoyantly written” (Esquire) look at what happens when we talk to strangers, and why it affects everything from our own health and well-being to the rise and fall of nations in the tradition of Susan Cain’s Quiet and Yuval Noah Harari’s Sapiens

“This lively, searching work makes the case that welcoming ‘others’ isn’t just the bedrock of civilization, it’s the surest path to the best of what life has to offer.”—Ayad Akhtar, Pulitzer Prize–winning author of Homeland Elegies

In our cities, we stand in silence at the pharmacy and in check-out lines at the grocery store, distracted by our phones, barely acknowledging one another, even as rates of loneliness skyrocket. Online, we retreat into ideological silos reinforced by algorithms designed to serve us only familiar ideas and like-minded users. In our politics, we are increasingly consumed by a fear of people we’ve never met. But what if strangers—so often blamed for our most pressing political, social, and personal problems—are actually the solution?

In The Power of Strangers, Joe Keohane sets out on a journey to discover what happens when we bridge the distance between us and people we don’t know. He learns that while we’re wired to sometimes fear, distrust, and even hate strangers, people and societies that have learned to connect with strangers benefit immensely. Digging into a growing body of cutting-edge research on the surprising social and psychological benefits that come from talking to strangers, Keohane finds that even passing interactions can enhance empathy, happiness, and cognitive development, ease loneliness and isolation, and root us in the world, deepening our sense of belonging. And all the while, Keohane gathers practical tips from experts on how to talk to strangers, and tries them out himself in the wild, to awkward, entertaining, and frequently poignant effect.

Warm, witty, erudite, and profound, equal parts sweeping history and self-help journey, this deeply researched book will inspire readers to see everything—from major geopolitical shifts to trips to the corner store—in an entirely new light, showing them that talking to strangers isn’t just a way to live; it’s a way to survive.

An excerpt from The Power of Strangers

Strangers in a Classroom

In which I travel all the way to London to relearn what should be a laughably rudimentary human skill, and am made to feel uncomfortable—­a sign of things to come.

Our journey begins on a bright day in a small classroom at Regent’s University in London. I’m sitting on a chair, palsied with jet lag, clutching my third cup of coffee. There are four other people there, too. They appear to be functioning at a higher level than I am, thankfully. We have come here to learn how to talk to strangers. Our teacher in this endeavor is an energetic twenty-­nine-­year-­old named Georgie Nightingall. Georgie is the founder of Trigger Conversations, a London-­based “human connection organization” that hosts social events aimed at facilitating meaningful conversations among strangers. Georgie had been recommended to me by a renowned psychologist whom we will meet soon. I got in touch with her, and when she told me that she was planning an immersive three-­day seminar on talking to strangers, I bought a plane ticket. Not long after, I landed in London, slept a couple of hours, and then arrived bright and early to a classroom, more coffee than man, but ready to learn.

Georgie started Trigger Conversations in 2016. Up until then, her background had been eclectic. She had graduated from college in 2014, where she was pursuing both an undergraduate degree in philosophy and a master’s in “emotions, credibility, and deception, from a psychology and linguistics angle,” as she says. That got her interested in language and conversation. After school, she tried her hand at a few different jobs. She interned at a start-­up, worked a series of jobs as a project manager, and was for a time at the Francis Crick Insti­tute, a world-­renowned biomedical research facility. “That was my last real job,” Georgie says. After that she struck out on her own.

She was always a talker, though the prospect of talking to strangers made her a little hesitant, “partly because of some social anxiety about the fact that it wasn’t normal to speak to strangers,” she says. However, she had also grown bored with the conversations she was having with new people—­the usual “What do you do?” and “How was your day?” interactions that never go anywhere. She wanted to help introduce people to the idea that these conversations don’t have to be dull or formulaic. They can be scintillating, informative, and exploratory. After she founded Trigger Conversations, she drafted a short manifesto along those lines: “We are adventurers in conversation,” she wrote. “We are travelers without a destination. Exploring the unknown, without expectation. Each one of us a teacher and every person an opportunity.”

Georgie, as it turns out, was exploring the unknown in particularly treacherous territory, conversation-­wise. London in particular, and the United Kingdom in general, is something of a global center of a nascent talking-­to-­strangers movement—­in large part because of a concerted national effort to combat the nation’s loneliness epidemic. A recent study by the British Red Cross found that a fifth of the British population often or always feels lonely. In 2018, the United Kingdom appointed its first “loneliness minister,” a high-­ranking government official who steers policy geared toward repairing frayed social ties and reinforcing social cohesion.

In the past few years, numerous grassroots groups have cropped up to try to get Britons to talk to strangers in cafés, pubs, or on mass transit. A “Chatty Café” initiative, in which pubs and cafés set up specially marked tables where strangers can chat, has spread to more than nine hundred locations throughout the United Kingdom and beyond. In 2019, the BBC launched a series called Crossing Divides that sought to inspire people to connect over social, cultural, or ideological differences. This included a “chatty bus” day, during which riders were encouraged to talk to one another, because that “may be the only time we are exposed to others outside the cocoons of our family, friends and colleagues,” wrote Emily Kasriel, the BBC’s head of special projects.

This was, shall we say, a departure from how the English, and particularly Londoners, usually behave on mass transit. And yet, despite the egregious violation of a time-­honored social norm, chatty bus day was a success. “It’s the best bus I’ve been on,” one woman told the BBC, confessing that she usually suffers from acute social anxiety. Some members of the general public have expressed skepticism, if not hostility, toward these initiatives, believing it to be at best an open question as to how compatible the Londoner temperament is with such shenanigans. When I met an English friend for a beer in London and told him I was in town to learn how to talk to strangers, he replied, “You do know that we’re like the worst in the world at it, yeah?”

Georgie was understandably nervous about her new venture early on—­and not just because of the local horror at the prospect of chatting on the Tube. She worried that there wouldn’t be an audience for an organization that tries to facilitate conversations with strangers, or if there was, people may try it, but they wouldn’t like it. When she started running her first conversation events, she was forced to grapple with the norms and anxieties that kept people from talking. What would they say? Where would they start? How should they engage? There was a problem of “people not knowing how to be,” she says. “Because if you say to someone ‘Come to an event with meaningful conversations with strangers—­we won’t talk about work; we won’t talk about, like, where you live,’ they’re like, ‘So what can I talk about?’ Suddenly they don’t know what’s okay and what’s not okay.”

Georgie eventually realized that the way to get past that initial awkwardness wasn’t to offer more freedom, but less. She would gather people in groups of two or three, give them cards with specific questions on them, and set a time limit. That way, all the groundwork that must be done in order to start a conversation—­meeting someone, initiating a conversation, and finding something to talk about—­would be taken care of. The possibility of rejection would be nil, and there’d be no fear about not knowing how to end the conversation. People could just jump right in, and then when the buzzer sounded, walk away without guilt. “That’s incredibly liberating,” she says.

Since she founded Trigger Conversations in 2016, Georgie has done more than one hundred events and many training sessions—­with strangers, companies, communities, universities, and conferences, both in London and around the world. In 2020, for instance, she developed a program with the University College London to help college students get better at connecting with one another—­something, as we’ll see, they struggle with. She’s seen people come away from these engagements transformed—­more confident, more curious, more optimistic about the potential of incorporating these conversations into their lives more regularly. “So many people were coming to these events and being like, ‘How do I do this in real life? I want to talk to strangers, but I can’t just go up to them with a question card and say, Do you want to answer a question?’ ” she says.

This apparent pent-­up demand gave Georgie an idea. She wanted to create a class that could teach people the skills to strike up these conversations in their everyday lives. She started attending self-­development seminars and reading everything she could find that could help her understand all the moving parts that made up something as seemingly simple as a chat with a stranger. “How do you start a conversation that’s cold and make it warm very fast?” she wondered. “And how do you ask the right questions in order to establish rapport, or go deep or be creative and playful? How can you be authentic? What are the limiting beliefs you are having about yourself, or the beliefs about the other person that are affecting your ability to take risks?”

Joe Keohane is a veteran journalist who has held high-level editing positions at Medium, Esquire, Entrepreneur, and Hemispheres. His writing—on everything from politics, to travel, to social science, business, and technology—has appeared in New York magazine, The Boston Globe, The New Yorker, Wired, Boston magazine, The New Republic, and several textbooks. An avid parallel parker and occasional working musician, he also won a prestigious Screenwriters Colony fellowship in 2017 for a comedy television pilot that remains, sadly, unproduced.

The Benefits of Connecting in a Suspicious World 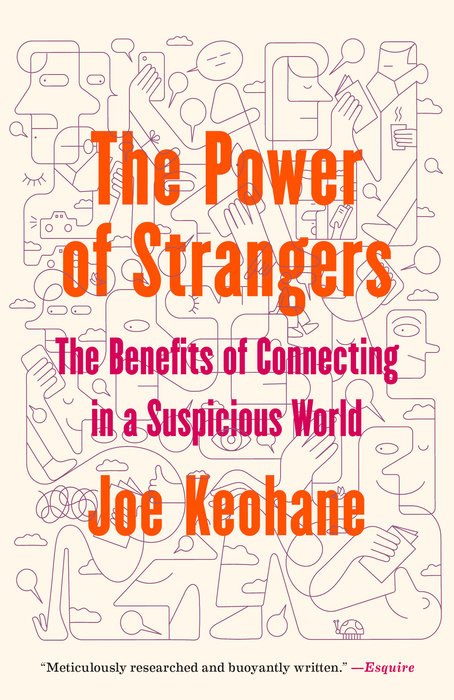