“A lush depiction of privilege and power, sex and stability . . . following three women in São Paulo . . . It Is Wood, It Is Stone is an elegant arrival of a new talent.”—Elle

With sharp, gorgeous prose, It Is Wood, It Is Stone takes place over the course of a year in São Paulo, Brazil, in which two women’s lives intersect.

Linda, an anxious and restless American, has moved to São Paulo, with her husband, Dennis, who has accepted a yearlong professorship. As Dennis submerges himself in his work, Linda finds herself unmoored and adrift, feeling increasingly disassociated from her own body. Linda’s unwavering and skilled maid, Marta, has more claim to Linda’s home than Linda can fathom. Marta, who is struggling to make sense of complicated history and its racial tensions, is exasperated by Linda’s instability. One day, Linda leaves home with a charismatic and beguiling artist, whom she joins on a fervent adventure that causes reverberations felt by everyone, and ultimately binds Marta and Linda in a profoundly human, and tender, way.

An exquisite debut novel by young Brazilian American author Gabriella Burnham, It Is Wood, It Is Stone is about women whose romantic and subversive entanglements reflect on class and colorism, sexuality, and complex, divisive histories.

An excerpt from It Is Wood, It Is Stone

I can still hear your words, the vibrant joy in your voice, as we sat in the back of a taxi stopped in traffic, the windows rolled down but no breeze blowing in, except for the occasional wind from a motorcyclist weaving past.

“Is it what you expected?” You clutched my hand and shook it with excitement.

“Maybe I should answer that once we’ve left the airport road. Don’t you think?”

“I can’t believe we’re here,” you said, not to me, but to a child waving to us from an adjacent car window.

The traffic sprawled for hours, barely moving, like a snake that had swallowed a calf. You had told me before that São Paulo was not the tropical paradise on postcards; it wasn’t the pictures of women on the beach with fruit baskets on their heads. High-rise buildings traced the horizon and favelas extended for miles on both sides of the highway. We passed a road that broke into the dense favela tessellation, revealing clothing lines strung from brick wall to metal roof, and a young girl pushing a shopping cart filled with cans and palm leaves.

A barefoot man standing on the partition walked in front of our stopped taxi and began to juggle oranges for money.

“Look,” you said and nudged my arm, but the cabdriver wasn’t, so I didn’t want to.

When the traffic moved again, just three car lengths, the man wouldn’t step away, so the driver whistled and waved his arm out the window. Not angry, but persistent.

“Linda—give him some money,” you said.

“I only have U.S. dollars,” I said, stirring the contents of my purse.

You took out your wallet.

“They gave me fifties at the money exchange.”

For a moment I saw you weigh whether you should part with a fifty-real note. Then the man moved to the side and the taxi lurched forward.

This trip felt like a series of fever dreams from the start. Just four months earlier, on a cold afternoon in September, you came home and told me you had something to tell me. The University of São Paulo had offered you a yearlong teaching residency in their history department. What you didn’t know was I had spent that morning cleaning our home, weighing the something that I had to tell you, too. I’d been thinking a lot about an escape from Hartford. What would it be like to spread both my arms into thin mountain air, to have my feet planted firmly on the ocean floor? I thought about how faucet water might taste in Italy while showering our neglected garden, which, despite my best attempts, had browned long ago. I thought about our seven years of marriage, gathered the paradoxical concerns that had been plaguing me for the past several months:

I had lost my job.

I didn’t have my own money.

I had spent the last year caring for my dying father.

Now my days were replaced with memories of everything I no longer had.

Because of these reasons, I thought that maybe it would be better for the both of us if I packed my bags and left for a while. I anticipated you might point out that these were all the reasons I should stay. Leaving you was less a solution and more like a heartbeat trying to break free from its rib cage. I couldn’t go on like this, but knew I might not survive without you. And so I stood at our kitchen island, cutting a bundle of store-bought cilantro with a pair of scissors, waiting for you to come home.

I remember the sounds of the door cracking and closing, your shoes bristling against the doormat. You rushed into the kitchen and dropped a stack of papers next to the cutting board, blowing the cilantro onto the floor.

“Baby,” you said, leaning over to help gather the fallen herbs. “I have got incredible news.”

“Forget about the cilantro. Linda—we’re going to Brazil.”

I knew you meant to state this as a proposition, not a declaration (the fact that you hadn’t turned into a back-and-forth that neither of us want to relive). I write about it now only to show how excited you were, convinced that a year in São Paulo would be a transformative change. You told me I could take as much time as I needed to respond, but really, we didn’t have that long. We would be leaving in early January, before the start of the Brazilian academic year.

An hour into our taxi ride from Guarulhos Airport, we arrived in our new neighborhood, Moema. There we discovered a district of mansions and luxe buildings. The trees grew unbridled from the sidewalks, cracking the cement, carpeting the ground with purple petals. I tried to imagine what São Paulo looked like before the concrete arrived. Swampy and mountainous, chirring with insects, the lush, viscous leaves bending like boat hulls. The São Paulo we saw stacked unrestrained in all directions, east to west, south to north. Outside our apartment building was a dusty inroad of gas stations and construction. When I stood from the taxi and stretched my legs, taking in our new environment, I could see, just beyond the urban moat surrounding our home, a mass of green. It was the entrance to Ibirapuera Park. The park was a manicured jungle, with palm trees that dangled strings of green coconuts and a pond where couples reclined to watch fountains spray and dance on the surface.

We dragged our suitcases into the lobby and stumbled into all of our boxes, the ones we’d shipped from Hartford the week before, organized in stacks against the wall.

“We forgot to list the apartment number,” you said, and then looked at the elevator, which fit three people and a large bag of groceries if one person leaned against the door.

After ten or eleven trips, up and down, down and up to the fourteenth floor, we had all of our belongings inside. I barely noticed what the apartment looked like, just that our bedroom had a mattress and a ceiling fan. We peeled off our clothes, wet from the summer’s humidity, and you rested your hand lovingly against my back, until even that was too hot and we spread to the opposite sides of the mattress. We fell asleep as soon as we shut our eyes.

I took a week to contemplate our move to Brazil, to give you a final answer. I didn’t know much about São Paulo, other than the stories you had told me from when you studied there as a teenager. It sounded thrilling, lively, a place where you had grown into a young adult. I considered that maybe I could evolve there, just as you had. I was surrounded by old wooden furniture we inherited from my father, heavy and chipped at the edges. His dresser, a grandfather clock, an army chest emblazoned with reagan/bush ’84 and bush/cheney 2000 bumper stickers. He left us a bookshelf that housed only two books: a twelve-step program guide and a biography of Dwight D. Eisenhower. Most of this furniture he acquired from VFW garage sales and police auctions; it had no sentimental value to him, and yet, as much as it tormented me to be confined by it all, I couldn’t bring myself to let it go. Leaving it behind felt like the only option. We could leave it behind and go to Brazil, and I wouldn’t have to leave you too. I wouldn’t even have to tell you that I had planned on leaving you.

I woke you up the following Monday before your alarm went off.

“All right,” I said, gripping your bare shoulder. “Let’s go.”

“Really?” You rubbed your eyes. “Are you sure?”

And then the alarm began to sound. I pulled the covers over my head until your sleepy hand found the snooze button.

I woke up from our post-flight nap around three, in our new apartment in Moema, panicked. It took a few blinks of my eyes to register where I was—all I saw were the bare walls, whirling fan, and the damp sheets where you no longer lay. Even after my mind compiled the pieces and located my body in space—here, São Paulo, Brazil, and you, probably in the kitchen—the dread remained. It expanded inside my chest cavity. Mornings in our bedroom back home floated in front of my eyes. Dust particles hovering in the rays of sunlight. Each morning I would inspect my terrarium on the windowsill, the only plants I managed to keep alive, pink and green succulents and a leafy fern. I fussed over them adoringly, misting their leaves, picking off the dead bits, and reorganizing the stems so that they didn’t block one another’s light. My face began to tense and prickle, a sure indication that tears would follow, and they did--two streams in the corners of my eyes that crossed over my ears and fell to the pillow.

But then I thought of you, somewhere nearby, and how thrilled you were in the taxi, scratching your newly grown beard, endlessly observing the billboards and graffiti we passed.

“I’m in the kitchen!” I heard you say, and for a moment I calmed, feeling like we could have been anywhere. When I found you in the kitchen, you hadn’t opened any of the boxes, but you had discovered a bag of white rice and canned beans in the cabinet. I stood close to you as you stirred beans on the stove.

“Sustenance,” you said, and revealed the bottle of cachaça we’d bought at duty free.

“Come on,” you said, and tore open a box labeled dishes, cups. You unwrapped two coffee mugs. “It’s a celebration!”

Gabriella Burnham is a dual citizen of the United States and Brazil. Now a New York resident, she lived in São Paulo as a child and most of her family still lives there today. She holds an MFA in creative writing from The Writer’s Foundry at St. Joseph’s College and has been awarded fellowships to MacDowell Colony and Yaddo. She has worked as a reporter, a creative writing teacher, and in immigration law. It Is Wood, It Is Stone is her first novel. 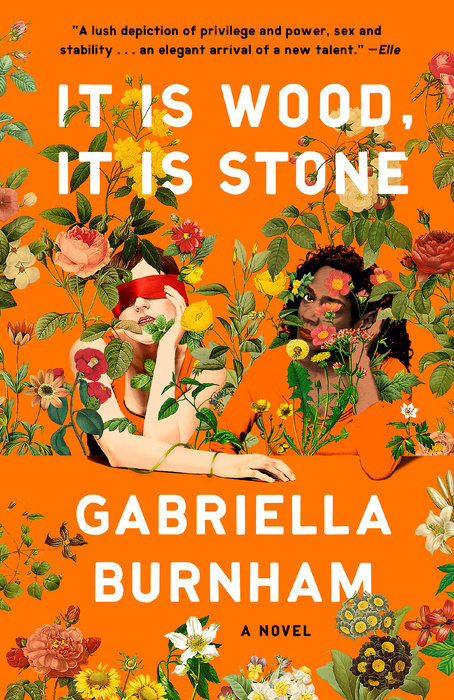