The Spirit and Craft of Italy's Greatest Food, with Recipes [A Cookbook]

JAMES BEARD AWARD NOMINEE • ONE OF THE TEN BEST COOKBOOKS OF THE YEAR: San Francisco Chronicle, Boston Globe • ONE OF THE BEST COOKBOOKS OF THE YEAR: Minneapolis Star Tribune, Glamour, Food52, Epicurious • “Missy Robbins brings her extraordinary knowledge and generous heart to teach us to prepare the pastas that made her restaurants, Lilia and Misi, two of the best in the world.”—Ina Garten, Barefoot Contessa

Food trends come and go, but pasta holds strong year after year. Despite its humble ingredients—made of merely flour and water or flour and eggs—the magic, rituals, and art of pasta making span over five centuries. Two ingredients are turned into hundreds of stuffed, rolled, extruded, dried, stamped, and hand-cut shapes, each with its own unique provenance and enrobed in a favored sauce.

New York City chef Missy Robbins fell in love with Italian food and pasta twenty-five years ago. She has been cooking, researching, and studying her way across Italy ever since, which led her to open two of America’s most renowned pasta restaurants, Lilia and Misi. With illustrated step-by-step recipes for handmaking forty of the most versatile pasta shapes and one hundred recipes for Italian American, regional Italian, and Robbins’s own best pasta dishes, plus two dozen vegetable sides, this is the hard-working manual for home cooks who aspire to master the art of pasta cooking.

Whether making pasta sheets for lasagna or stamping out pasta “coins” for Corzetti with Goat Cheese and Asparagus—or even buying handmade pasta to make Tagliatelle with Porcini, Rosemary, and Garlic—Robbins provides all the inspiration, instruction, and encouragement required to make pasta exceptionally well. Evocatively photographed with nearly 100 full-color mouthwatering photos of pasta dishes and twenty images from Italy, this is a richly illustrated ode to the ingredients, recipes, and craft that have made pasta the most popular fare of a beloved cuisine.

An excerpt from Pasta

My earliest pasta memory was a dish called “milk spaghetti,” a gooey, unnatural brick-orange tangle of pasta, Campbell’s tomato soup, Cracker Barrel Cheddar cheese, butter, and milk baked in the oven, cut into squares, and scooped out of a casserole dish with a spatula. It was passed down to my mother from my grandmother Mildred, a woman with a fairly limited stash of culinary provocations.

Needless to say, as a Jewish kid from Connecticut raised in a kosher home, I wasn’t exactly reared on carbonara. It was milk spaghetti and, when we went out to our local Italian spots, fettuccine Alfredo, stuffed shells, and the stray cheese-filled ravioli. But my heart belonged to baked ziti. On the weekends, we were regulars at Leon’s, a real Saturday night kind of place with white tablecloths and those ubiquitous garnet-colored Venetian candles that give so many red-sauce joints their Dick Tracy luster. The ziti, topped with about a pound of mozzarella baked to golden perfection, would come careening through the dining room on giant platters. On weeknights, we’d do the same thing at Bimonte’s, a pizzeria with psych-ward lighting, red-leather booths, and scuffed linoleum floors. I’d wash down my ziti with a Foxon Park white birch soda, the local soft drink of choice, while my father tackled a meatball sub and a Pepsi. We’d order a pizza on the side.

By the time I was flirting with adolescence, we’d taken to buying fresh pasta at a place called Connie’s Macaroni, one of many Italian American pastifici in the New Haven area. A jewel box of a shop, it teemed with Italians: mamas picking up red sauce on the way home from Mass; a constant gaggle of older men there only to loiter. We’d load up on linguine and fettuccine.

Eventually, we got around to making our own pasta. By then I’d cultivated a fascination, hitching along on my mother’s trips to the market just to park myself in the dried goods aisle, obsessively scanning the boxes of pasta to try and commit the shapes and their names to memory. She ended up buying me a pasta extruder when I was eleven—a white Simac PastaMatic that was nearly impossible to clean. We’d make fettuccine mostly, which we’d promptly smother in Alfredo sauce.

This is all to say that there was always pasta. Yet while I’d love to be able to draw a straight line from my two beloved childhood red-sauce joints to what I do today, I cannot. Nor can I really suggest that my obsession with pasta shapes or my early forays into extrusion were profound bits of foreshadowing. Instead, my path to pasta has been more about chance than fate.

During my senior year of college, I started cooking professionally at 1789, a New American restaurant in Georgetown. I was making smoked salmon platters, goat cheese–crusted racks of lamb, Caesar salad—the kind of square-plate food that reigned in 1993. It was hardly enough to inspire a young cook today, but it was a hell of a lot more appealing than a master’s degree in psychology. After graduation, I went north and spent a summer filled with French men and terrines as a cook at a fancy restaurant in the Berkshires. By fall, I’d enrolled in culinary school in New York. After six months, I was interning with Wayne Nish at March before moving on to the kitchen at Anne Rosenzweig’s Arcadia. By 1997, after nearly two years back at March, I returned to work with Anne as sous chef at her second restaurant, Lobster Club.

At the time, Lobster Club was one of the hottest restaurants in New York—a converted brownstone on East Eightieth Street that seemed to capture every bit of energy the Upper East Side had to offer. I was in my midtwenties and the daytime sous, which basically meant I’d be out most nights just shy of 4:00 a.m. and would show up less than three hours later to prep—invariably hungover but still brimming with ambition. I’d have every one of the burners going by 8:00 a.m.; by 4:00 p.m., I’d be in the basement rolling out the menu’s only pasta. It became my favorite time of day, and I guarded that private time almost maniacally. I have a vivid memory of an afternoon right before service when one of the cooks rushed downstairs to the basement while I was stuffing ravioli to tell me that the building next door was on fire, that the fire was coming into the restaurant, and that I needed to evacuate—immediately. To which I replied, “Go f*** yourself, Lisa. I’m busy.”

After two years working six days per week at Lobster Club, I was beat-up and nursing an urge to cook outside of New York. I’d visited Italy with my parents in college, and while I had very little recollection of the details of the trip, I remembered how Italy made me feel. I chose it because it was the only country I had a visceral connection to, even if I wasn’t sure I wanted to cook Italian food or, frankly, what Italian food actually was. But Anne agreed to help me secure an internship, and she came back with three waiting. There was just one problem: I had no money. When I told Anne I wasn’t sure how I’d get there, she looked me straight in the eye and said flatly, “Well, go find the money.”

The second thing I learned was how to make gnocchi. The restaurant had a pasta room run by a woman in her forties who was almost certainly born with a cigarette in her mouth. She’d sit in the room all day, a Merit resting on her bottom lip while she rolled out pasta dough. One day it’d be ravioli, the next it’d be strozzapreti, the following tagliatelle—but gnocchi day was always my favorite. It was a three-person job: the first would break down the potatoes, the second would add the flour, and the third would roll out the dough. The trick was that you had to do it all while the potatoes were still hot. I still make potato gnocchi this way.

I spent two months at Righi, followed by a brief stint at a restaurant on the Emilian coast before moving on to Il Convivio in Sansepolcro, in eastern Tuscany. Il Convivio was a husband-and-wife operation housed in Palazzo Bourbon del Monte, which was built by Lorenzo de’ Medici’s architect during the Renaissance. Paolo was the town’s mayor by day, and by night he’d hold court in the restaurant as host while his wife, Fernanda, ran the small kitchen with a staff of four. Every day during the midday break between lunch and dinner she’d make the pasta—all from hand-rolled northern-style dough of egg and 00 flour. Her buddies would stop by to help, and they’d turn out these beautiful sheets of pasta that she’d drape over the counter to dry. From them, we’d cut wide ribbons of pappardelle that would be smothered in a ragù made from a grab bag of wild game, tiny tortellini packed with mortadella and served in brodo (broth), and ravioli stuffed with ricotta, bitter greens, and nutmeg. I never went home for break once in my month at the restaurant. At night, I’d bring my copy of the International Herald Tribune to the local wine bar and practice my Italian with the bartender over a bowl of pappardelle with chickpeas and rosemary, a dish that, in numerous iterations, would follow me throughout my career.

My last stop was Agli Amici, a white-tablecloth thirty-seat restaurant in a village outside of Udine, in Friuli. I landed there shortly after it had received a Michelin star, and was packed into a dorm above the restaurant with a few other interns. I spent about a month cleaning bathrooms and being yelled at on the line in Friulian dialect. “You understand what you want to understand!” was a common refrain, which I only understood later, after imploring a fellow line cook to translate for me. It’s here that I really learned how to cook pasta—how to finish pasta by “marrying” it with the sauce, allowing the pasta to absorb its flavor without beating it into soggy submission. Four years later, when Tony Mantuano, the founding chef at Spiaggia in Chicago, would talk about the importance of the “marriage ceremony,” I knew precisely what he meant.

Talia Baiocchi is the editor-in-chief of Punch and the author of James Beard Award–nominated Sherry. She has written for Bon Appétit, Saveur, and many more. She lives in Brooklyn.

The Spirit and Craft of Italy's Greatest Food, with Recipes [A Cookbook] 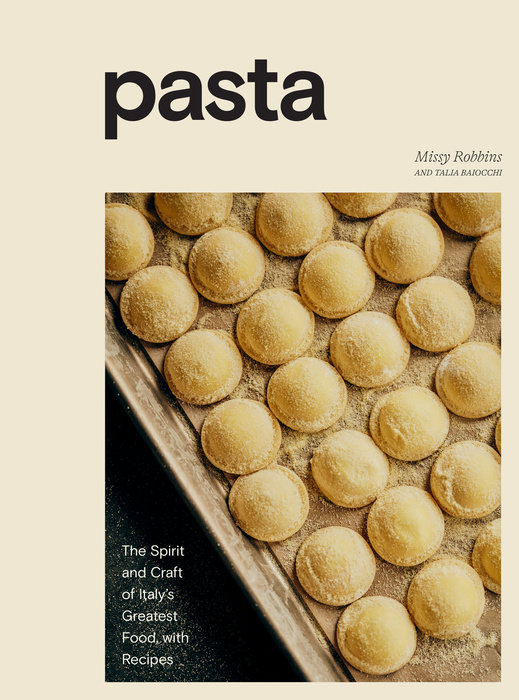