NEW YORK TIMES BESTSELLER • Witness the epic final chapter of the Skywalker saga with the official novelization of Star Wars: The Rise of Skywalker, including expanded scenes and additional content not seen in theaters!

The Resistance has been reborn. But although Rey and her fellow heroes are back in the fight, the war against the First Order, now led by Supreme Leader Kylo Ren, is far from over. Just as the spark of rebellion is rekindling, a mysterious signal broadcasts throughout the galaxy, with a chilling message: Emperor Palpatine, long thought defeated and destroyed, is back from the dead.

Has the ancient Lord of the Sith truly returned? Kylo Ren cuts a swath of destruction across the stars, determined to discover any challenge to his control over the First Order and his destiny to rule over the galaxy—and crush it completely. Meanwhile, to discover the truth, Rey, Finn, Poe, and the Resistance must embark on the most perilous adventure they have ever faced.

Featuring all-new scenes adapted from never-before-seen material, deleted scenes, and input from the filmmakers, the story that began in Star Wars: The Force Awakens and continued in Star Wars: The Last Jedi reaches an astounding conclusion.

An excerpt from The Rise of Skywalker: Expanded Edition (Star Wars)

Rey sat cross-­legged, eyes closed. She didn’t remember rising off the ground, but she was vaguely aware that somehow she’d ended up floating. Pebbles and small boulders hovered around her, like a field of asteroids orbiting their sun. The Force flowed through her, buoyed her, connected her to everything. The lush rain forest moon of Ajan Kloss was teeming with life. She could feel every tree and fern, every reptile and insect. A few strides away in a hidden den, a small furry creature groomed its litter of four kits.

“That’s it, Rey,” came Leia’s voice, deep and soothing as always. “Very good. Your connection becomes stronger every day. Can you feel it?”

“Now reach out. If your mind is ready, you’ll be able to hear those who have come before.”

Rey inhaled through her nose and sent her awareness into the void. Peace and calm were key, Leia always said. She reached, she searched, she felt the breeze on her cheeks, she smelled loamy soil, damp from the recent rain.

She didn’t want to admit that she was failing, so instead she said, “Why did you stop training with Luke?” Her words came out too harsh, almost like a challenge.

Leia took it in stride. “Another life called to me.”

Eyes still closed, Rey asked, “How did you know?”

“A feeling. Visions. Of serving the galaxy in different ways.”

“But how did you know those visions were true?” Rey pressed.

“I knew.” She heard the smile in Leia’s voice.

Rey didn’t understand how Leia could be so sure. Of anything.

“I treasured each moment I spent with my brother,” Leia added. “The things he taught me . . . I use them every day. Once you touch the Force, it’s part of you always. Over the years, I continued to learn, to grow. There were times on the Senate floor when the meditations I’d practiced with Luke were the only thing that kept me from causing a galactic incident.”

Rey frowned. Leia didn’t need patience. She could have made anyone do anything she wanted, with the power of the Force. Surely she’d been tempted?

“Was Luke angry? When you quit?” She hoped Leia noticed that she could talk and float at the same time now. That was progress, right?

Leia paused to consider. “He was disappointed. But he understood. I think he held out hope that I’d return to it someday.”

Rey almost laughed. “He should have known better.” Once Leia made a decision, it was for keeps.

“I gave him my lightsaber to convince him otherwise. Told him to pass it on to a promising student someday.” But­–Leia’s voice had grown tight. Rey sensed she was holding something back.

“No idea. Now stop trying to distract me,” Leia said. “Reach out.”

Rey refocused and emptied her mind of worries, just as Leia had taught her. She cast out her awareness. Opened herself to anything the Force might want to tell her. Tentatively, she called for him: Master Skywalker?

Nothing, nothing, and more nothing.

“Master Leia, I don’t hear anyone.”

“Let go of all thought. Let go of fear. Reach out. Invite the Jedi of the past to be with you.”

“Be with me . . . ​be with me . . .” She waited all of a second, maybe two. “They’re not with me.” Rey made a noise of exasperation, then flipped herself neatly to land on the ground. Rocks toppled around her.

“Rey,” Leia said. The general could put so much into a single word: chastisement, acceptance, amusement, fondness. Maybe ­that’s why she’d become such a powerful leader. “Be patient.”

“I’m starting to think it’s impossible. To hear the voices of the Jedi who came before,” Rey said, striding ­toward Leia.

Her Master always managed to look neat and tidy, no matter how muddy their makeshift base got. Her hair was pulled back into a circlet of braids, and she wore a quilted vest over a brown tunic. Alderaanian jewelry always dangled from her earlobes, wrapped her wrists and fingers. Her eyes were bright and knowing, as always, but Rey had noticed that her movements had slowed recently, as though her bones ached.

Leia’s face held a hint of a smile. “Nothing’s impossible.”

Rey grabbed her blast helmet and leapt to her feet. “Nothing’s impossible . . .” she echoed, trying to believe it. “I’m going to run the training course. That I can do.” Rey needed to run. Or maybe hit something.

Leia handed her ­Luke’s lightsaber. Rey took it reverently. Then she dashed into the jungle. BB-­8 rolling after her.


Leia watched Rey sprint away, a hint of a smile on her lips. Training the girl always filled her with pride, but also misgiving. Rey was both a wonderful and an exasperating student. Frustrated with anything she ­didn’t pick up quickly, completely unaware how fast she did pick things up.

She wasn’t one to judge, though. Leia had exasperated Luke just as much. Besides, there was something about growing old that made her connection with the Force even stronger. When the body began to fail, the mind reached out, unencumbered by physical ability. The truth was, Leia couldn’t run through the jungle if she wanted to. Peace and calm came easily because her body craved them.

Then again, perhaps Leia had never been young. By the time she’d reached the age Rey was now, she was leading a rebellion.

Rey could be a great leader someday, and she would be, if Leia had anything to do with it. The girl had darkness inside her, just like Ben. But Leia would not make the same mistakes she had with her son. She would not give in to fear—­neither of the darkness rising within her pupil nor of her own questionable qualifications as a teacher. Most important, she would never send Rey away.

Leia turned and began walking back toward the base. She reached out a hand and let her fingers trail through the ferns and broad-­leafed creepers that lined her path. Ajan Kloss held so many good memories. Years ago, she’d trained here with Luke, who had declared it “Nice Dagobah.” He’d claimed it was as wet, warm, green, and overflowing with life as the planet where he’d trained with Yoda—­except it didn’t smell bad.

She stepped into a clearing. To her right, a large tree with a massive trunk reached for sunlight, spreading a canopy of branches that shaded the clearing, keeping anything else from growing except ground creeping ferns and low, sparse grass. Leia had trained right here, in this very spot. She reached out and touched the tree trunk reverently. A large bole of bark had formed around an old wound. It was almost sealed shut.

Leia had been the one to damage the tree. She’d swung for Luke with her lightsaber and missed, slashing into the tree trunk instead. This tree had been healing itself for more than two decades.

Oh, Luke, I hope I’m doing this right, she thought. Leia was no Jedi Master, but she had learned from the best. And not just from Luke; over the years she’d occasionally heard the voice of ­Obi-Wan Kenobi through the Force, and even more rarely, that of Yoda. Some days it had felt as though she’d learned from the Force itself. She was first and foremost a politician and a general, but she had accepted her Jedi legacy and embraced it as best she could.

And maybe that’s exactly what Rey needed: training in the Force not from a formal Master, but rather someone grounded in the every­day minutiae of life and survival. Obi-­Wan had failed to keep Vader from the dark side. Luke had failed the same way with Ben. She could not fail Rey.

Insects sang as she walked. Birds warbled overhead, and tiny amphibians trilled their mating calls. Odd how such a raucous place could be so peaceful. The noise was so loud, so ever-­present, and so soothing, it was almost as perfect as silence.

Rae Carson is the author of the bestselling and award-winning Girl of Fire and Thorns series. Her books tend to contain adventure, magic, and smart girls who make (mostly) smart choices. Originally from California, she now lives in Arizona with her husband. 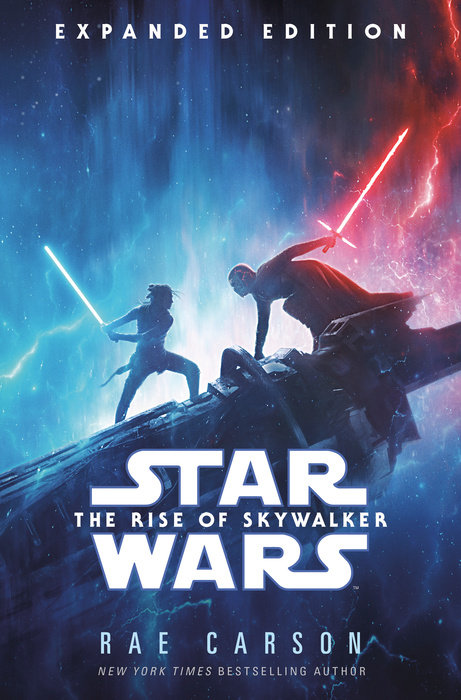