How Our Search for Love Is Broken: A Memoir

When can we say we’ll be single forever—and that’s okay? One woman questions our society’s pathologizing of loneliness in this crackling, incisive blend of memoir and cultural reporting.

“The Lonely Hunter challenged everything I assumed about the nature of loneliness and what it means to lead an authentic life.”—Doree Shafrir, author of Thanks for Waiting and Startup: A Novel

ONE OF THE MOST ANTICIPATED BOOKS OF 2022—Cosmopolitan, She Reads

One evening, thirtysomething writer Aimée Lutkin found herself at a dinner party surrounded by couples. When the conversation turned to her love life, Lutkin stated simply, “I don’t really know if I’m going to date anyone ever again. Some people are just alone forever.” Her friends rushed to assure her that love comes when you least expect it and to make recommendations for new dating apps. But Lutkin wondered, Why, when there are more unmarried adults than ever before, is there so much pressure to couple up? Why does everyone treat me as though my real life won’t start until I find a partner? Isn’t this my real life, the one I’m living right now? Is there something wrong with me, or is there something wrong with our culture?

Over the course of the next year, Lutkin set out to answer these questions and to see if there really was some trick to escaping loneliness. She went on hundreds of dates; read the sociologists, authors, and relationship experts exploring singlehood and loneliness; dove into the wellness industrial complex; tossed it all aside to binge-watch Netflix and eat nachos; and probed the capitalist structures that make alternative family arrangements nearly impossible.

Chock-full of razor-sharp observations and poignant moments of vulnerability, The Lonely Hunter is a stirring account of one woman’s experience of being alone and a revealing exposé of our culture’s deep biases against the uncoupled. Blazingly smart, insightful, and full of heart, this is a book for anyone determined to make, follow, and break their own rules.

An excerpt from The Lonely Hunter

For many people, 2016 was one of the worst years that had happened in a while, or that’s how it felt on Election Day. I was probably at the most financially successful point in my life, which was very messed up. I lived in a newly remodeled apartment with one other roommate who met her boyfriend about three months into our lease and then promptly disappeared. I would only know she’d come home for a change of underwear by the hint of stale smoke in the air.

Before that apartment, I’d lived in three different houses that could loosely be called cooperatives—­lots of roommates invested in one another’s lives, sharing food, throwing events, and pooling resources. By the time I’d downsized to cohabiting with one other person, I was completely sick of communal life. I wanted to put stuff down and later find it where I’d left it. I wanted things to be clean. I wanted space in the refrigerator. I wanted silence.

Scaling down the number of roommates had scaled down my life. There were many activities in my weekly calendar, but when I had lived with fourteen people, I rarely spent an evening or afternoon or morning alone. Weekends meant dance parties, trips to the beach, picnics in the backyard, house projects, and massive breakfasts cooked over hours together in the kitchen. The sustained energy required for that level of socialization had waned as I’d aged, but I hadn’t contemplated how leaving a communal living situation would put a huge hole in my sense of home.

Now life at home was very quiet. My singular roommate and I barely ever sat in our cavernous living room. The hand-­me-­down couches, both upholstered in dingy, mismatched gray, emphasized the utilitarian plainness of the high-­ceilinged white-­box rooms. There was no carpet, nothing hanging on the walls, no standing lamps or friendly plants. We’d furnished it as though we planned to leave at any moment.

As a child, I’d been a pack rat, like my mother. The apartment I lived in until I was seven, a four-room railroad on East Twelfth Street in New York City, was overrun with our collections. Mostly, I remember my mother’s papers, which littered every surface. She did her writing longhand on lined yellow pads, perched at her tall wooden desk that doubled as a dining room table. The apartment’s massive claw-­foot tub was set in the kitchen, so I would often float in cooling water and watch her scribble intently in the light that filtered through the courtyard window.

In those years, my mother was always busy and dynamic, managing my care with a distracted air. She wrote plays that were produced in black box theaters, sometimes featuring my father, who was an actor when he wasn’t waiting tables in a fine dining restaurant near Union Square. Money was always an issue, one they seemed to regard as the price of making their art. I was too young to know the difference, and if I noticed anything amiss in our little universe it was my dad’s propensity for cleaning. How he loved to straighten up papers, shuffling them into confusion, then throw my toys in a box out of sight, and vacuum so we couldn’t hear ourselves think.

Things changed abruptly when my parents divorced and I began rotating from apartment to apartment annually. What remained of my adolescence was consumed with years of custody arguments, phantom child support, and all the other rigamarole that accompanies childhood trauma. By the time I was a teen, the burden of emotional care had shifted to me, as the financial stress took a toll on my mother’s health. Diagnosed with multiple sclerosis as a very young woman, my mother had persisted in walking and generally living a functional life, but as time went on, her need for pain medication and her worsening symptoms consumed more and more of her time and mental energy. This also made it more difficult for her to maintain social connections. I remember her going through an intense period of isolation when I was in high school, withdrawing to the confines of her bedroom to watch reruns of The Price Is Right.

Living on SSI, my mother could only legally make so much money every year without risking her benefits being taken away. She might have been happy to develop her writing career over a monthly government check, but that check was also tied to her ability to access the Medicaid insurance she needed. A person on disability SSI will have the income of their spouse added to the assessment of how much they get, which meant that she was essentially outlawed from remarrying. “Marriage equality” in the United States only extends to able-­bodied people, and that’s just the start.

For another glaring example of the barriers erected around financial equality for disabled people, during the pandemic, activists pointed out how quickly accommodations were made so people could work from home when it hurt employers’ bottom line. The Americans with Disabilities Act is supposed to guarantee a disabled person receives “reasonable accommodation,” but that only applies to businesses with fifteen people or more, and bigger companies have all sorts of loopholes that alienate disabled employees so they get fired or quit. The pandemic, and so many companies’ sudden pivot to remote work, made it nakedly obvious that accessibility could become a priority whenever businesses felt like it.

Growing up and witnessing my mother’s economic uncertainty, to say I had low expectations of future financial success would understate the case. It didn’t alarm me for most of my twenties, because leading a scrambling existence seemed perfectly ordinary. I got into a magnet high school for visual art, then was admitted to a small art college in the city where tuition was covered for everyone accepted. I took out student loans for living expenses that I would pay off over the next fourteen years, and I worked part-­time in a bookstore. After college, I acquired one of those unaccountable résumés that adds up to nothing: theater admin, painting fashion showrooms, working in the kitchen of a vegan restaurant, photo assistant, catering events, waiting tables, fact-­checking at a magazine, teaching at after-­school programs in public schools, giving Photoshop lessons at a college, and one heinous day at a children’s shoe store.

I got my first writing job just before I turned thirty-­one. I had been working part-­time at a reception desk, when a woman I knew who already had a lucrative career in advertising stopped for a chat and mentioned she’d been asked to apply to a much-­lower-­paying position at a blog site, but she wasn’t psyched about the prospect. I begged her to send my wonky résumé to them with a word of recommendation, and she did. After a trial period, they hired me full-­time.

That was the first and only staff writing job I had, with vacation, paid sick days, and even basic health insurance. For the first time in years and years, I went into an office every day, at a WeWork in the financial district. We sat in two tight rows in a single space, silently staring at our screens and communicating via Slack. If someone typed “LOL” you knew they ­really weren’t.

As a person with an aptitude for many things and actual proficiency at very few, I took to blogging frighteningly well. If I had a talent in life, it was the ability to process written information and reshare it in the voice of a particular blog. A dubious skill, but it made me an excellent workhorse writer. When the company started having traffic competitions with gift certificate rewards, I won them month after month. When, after a year and a half, I didn’t get the promotion I wanted, I headed off into the wilds of freelancing.

In retrospect, perhaps I should have held on to a full-­time job, though that company would give up their WeWork office not long after I left, letting person after person go until they were a bare-bones operation. I was quickly hired by a series of similar websites that paid about the same, but with no demands that I commute anywhere—­and no benefits of any kind. I could also do many jobs at once, writing for three or four websites a day. By 2016, for the first time in my life, I was making a reasonable amount of money to live off of in New York City.

Aimée Lutkin is a writer, director, and performer from New York City, where she was born and raised. Her writing has been featured on Jezebel, Marie Claire, and Glamour online, among other places.

How Our Search for Love Is Broken: A Memoir 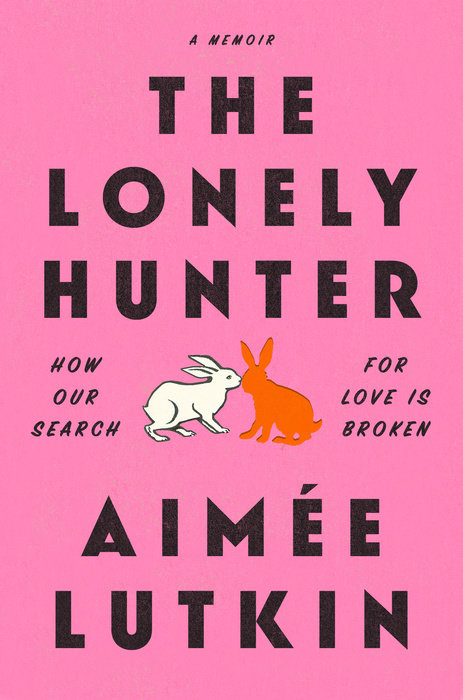