An obsessive power struggle between an editor and her millennial intern turns dangerous in this debut psychological thriller—for readers of Luckiest Girl Alive and You.

NAMED ONE OF THE BEST BOOKS OF THE YEAR BY KIRKUS REVIEWS • “Hypnotic . . . an addictive thriller.”—People

Trusting you was my first mistake. To Katherine, twenty-four-year-old Lily Lunt is a typical “snowflake.” It seems like the privileged, politically correct millennial will do whatever she can to make it big as a writer, including leveraging her family’s connections. To Lily, Katherine Ross, a career woman in her early forties, is a holdover from another era: clueless, old-fashioned, and perfectly happy to build her success on the backs of her unpaid interns.

When Lily is hired as the new intern at the magazine where Katherine is editor in chief, her arrival threatens the very foundation of the self-serving little world that Katherine has built. She finds herself obsessively drawn to Lily, who seems to be a cruel reminder of the beauty and potential she once had—things Lily uses against Katherine as she slowly begins to undermine her, sabotaging her work and turning the magazine’s new publisher against her. Is Katherine being paranoid? Or is Lily seeking to systematically destroy her life? As Katherine tries to fight back, a toxic generational divide turns explosive and long-buried secrets are exposed—with deadly consequences for both. . . .

Gripping and provocative, Precious You delivers an unsettling, provocative take on the contemporary workplace, turning the professional roles women play on their heads in a razor-sharp, revenge-driven thriller for our age.

Praise for Precious You

“Breathtaking. A brilliant, butt-kicking romp through the Gen X/Millennial clash and the horrors of cutthroat corporate life. I couldn't put it down.”—Alex Marwood, Edgar Award–winning author of The Wicked Girls

“What a wild ride. I’m obsessed with it! I felt so seen, so many times. This book, while so twisted and dark, will resonate with many, many women.”—Laurie Elizabeth Flynn, author of Last Girl Lied To

“An intergenerational clash between two women, played out to a shocking finale. Nail-biting.”—Harriet Tyce, author of Blood Orange

An excerpt from Precious You

I’ll never understand why they weren’t worried, those young things I saw every day at the bus stop, stretching free of their crammed houseshares and parental buy-­to-­lets in my neighborhood, at least a mile from the nearest place they would actively choose to live. Why didn’t they care we hadn’t seen a bus for twenty minutes? I made a mental note to ask Iain why no one under thirty seemed arsed about being late for work anymore, then texted my deputy, Asif. I was hoping he’d have words of reassurance, something I could use to soothe my latest work-­related crisis. That Monday was the first day of a brave new world at the magazine I edited: new owners, a new publisher, a shot at a new start. I knew it was critical I made a good impression, but the world was already screwing this for me by making all the buses disappear.

No bus. Confess late now or busk it?

And got back a not particularly helpful:

I can see myself that morning, gazing in the direction of my flat, the edges of its dried-­out window boxes just visible from where I stood. I wore the oversized high-­collared shirt I’d bought the day before, an ankle-­length pencil skirt split to the thigh and the black biker I always wore to work. I wanted to show up looking just-­pressed, but edgy and not desperate to fit into the new corporate regime I was facing, even though, of course, I was.

Mondays were already hard for me, even before that day. It wasn’t just that after twenty years I seemed to be getting worse at my job, not better, nor that the youth, hope, and unbounded energy of my interns shoved the frustrated promise of my own formative years right back in my face with greater force every day. No, it was the awfulness, the horrifying dread, of the interns asking me, “What did you do this weekend?”

Compared to when I was at the height of my potential in my twenties, I felt invisible most of the time. But on Monday mornings I felt suddenly watched. I tried, as I so often did when I was surrounded by millennials, to minimize the damage to my pride. While they recounted their energetic tales of running around London, meeting other bright young things from north, south, east, and western corners, as I had once done, I sat tight. I had done next to nothing with no one but Iain, and this could be exposed at any second. I’d sometimes manage to arrange phone interviews for 9 a.m. on Mondays, so I could block out their weekend lives and avoid their social and creative endeavors showing up my dead existence. If anyone got to ask me The Monday Morning Question, I’d recently taken to out-­and-­out lying, telling the interns, “We caught up with some old friends.”

That Monday, my anxiety was soaring when I caught the glow of a taxi’s light far up the road. I watched it furtively at first, until I realized I was the only one inching toward the edge of the pavement to hail it. Of course, none of the bus stop lot had the money for a black cab. No money, but plenty of time. Their lives were rich with activities and all the time they had to do them: arts, crafts, queuing for artisan toast, curating photographic records of their fizzy lives on social media, and generally being creatively incontinent. I felt the hum of self-­belief and productivity whenever I was around younger adults and it left me feeling singed.

I double-­checked behind me for any would-­be competitors for my cab. I saw you.

You were something quite different.

You had their air of creative confidence, the one I could only assume comes from parents who cheerlead your every trifling achievement, but you seemed to carry a hunger about you too; some neediness in your eyes. Out of nowhere, I got the sense you were a young person with whom I might possibly have some common ground.

Because unlike the others, you seemed like you were bothered by being late for work. Less like them, more like me. Such an odd sense of time and age I felt you emit: undeniably as young as them, but somehow seeming older and more desperate, like me, all at once. And do you remember, you wore that tiny leather skirt? I have one just like it and I used to wear it to work too. Your skin was as pale as mine, but fully taut and shimmering, except for a dirty stripe of oil on the right side of your forehead. I couldn’t take my eyes off you. You were like looking into a mirror, or more like a window into a different time in my life, not long past, but just out of reach. I wanted to know more about you, to see if you really could be anything like me. When the taxi began to pull over, I began to wonder if I should invite you to share it.

I glanced back at you again. A finger on your left hand fiddled with the string tag on the yellow laptop case you held against the front of your thighs. You switched your weight from hip to hip and occasionally flicked the nails of your right thumb and index finger under your chin. I took the door handle and turned around to take you in one last time, before the ebb and flow of a London day separated our paths. A thought needled its way to the front of my mind: your face would return to me throughout the day and I’d have to exorcize you by telling Iain over dinner about The Girl I Saw at the Bus Stop Who Reminded Me of The Old Me.

But you were watching me.

As you looked over, you bit your bottom lip, painted hot orange like the sunrise in summertime, and flicked your nails against your skin again before moving your black eyes off me to the nonexistent bus on the horizon.

I could let you into my cab, but I wondered what we would possibly talk about. Or maybe you’d just sink into your phone, like people your age do, and I wouldn’t get to talk to you at all. And how would you pay your way? People like you never have cash on them, so would I give you my bank details so you could transfer your share of the fare? Was that wise? Was that cool? Wasn’t there an app for that, one I’d be embarrassed to say I haven’t downloaded or even heard of yet? Or would you ask to meet me somewhere at lunchtime to give me my twenty quid? Would we then end up having a burger? Find ourselves talking for ages?

Go on, girl, you show ’em what us old ravers are made of, I could hear Iain say.

No, I should leave it.

I didn’t need to overcomplicate what was already shaping up to be another day I’d want to forget. I opened the taxi door and readied myself to leave you on the pavement, but suddenly you were there, right behind me.

You made me jump.

“Hi there, you must be heading south? Mind if I get in?” When you spoke to me, your mouth split to reveal the most fantastic teeth.

“Perfect. Me too. Wait a sec, sorry, I’ve just realized, I literally don’t have any cash.”

Behind you I saw that the bearded and big-­haired gaggle were agog that you’d thought of hitching a ride and they hadn’t. If I refused you, I feared a group of them would initiate some kind of collective action, gathering their grubby coins together in a bid to get in.

“It’s fine, just get in.” One of you had to be better than three or four.

“Is that all right? You’re absolutely sure?”

You gained and double-­checked my consent. It was a technique you would use again and again on me when I didn’t understand what I was agreeing to. One of your many gifts.

Helen Monks Takhar is the author of the novel Precious You. She is also joint managing director of the production company Second Generation with her husband, screenwriter and executive producer Danny Takhar. Helen worked as a journalist, copywriter, and magazine editor after graduating from Cambridge University. She began her career writing for financial trade newspapers before contributing to UK national newspapers including The Times and The Observer. She lives in North London with her husband and two daughters. 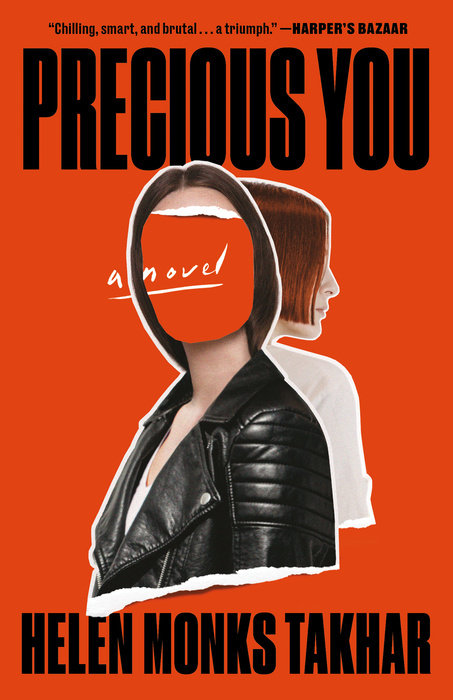