Some women would do anything for their children. This provocative novel “goes straight for the jugular of modern motherhood” (Lindsay Cameron, author of Just One Look)—from the author of the “addictive” (People) thriller Precious You.

“Mothers and hustlers can be a lethal combination—and the perfect recipe to keep you up all night.”—Amanda Eyre Ward, New York Times bestselling author of The Jetsetters

Rose O’Connell is barely surviving. Her marriage is rocky; her son isn’t fitting in at his new school, the prestigious Woolf Academy; and their tiny apartment in a rapidly gentrifying neighborhood can barely contain her family. As she struggles to make ends meet on her junior bank teller wages, Rose finds that life as the only mom in a name tag and uniform at the Woolf’s shiny school gates isn’t easy.

Not so for those in the elite and secretive Circle—a tight-knit group of wealthy mothers, led by the charismatic and glamorous Amala Kaur—who rule the school. When the mysterious death of one of the Circle’s members creates a vacancy, Rose dares to hope she could fill it and transform her life.

Amala’s shocking decision to invite Rose into her clique provokes resentment among the Circle, especially when her fortunes, self-esteem, and status start to soar. But Rose soon realizes the true price of being on the inside. Far from being a dream come true, the Circle proves her worst nightmare. Unlike the woman she replaced, can Rose escape with her life?

Taut, complex, and compulsively readable, Such a Good Mother is a razor-sharp take on the myth of having it all.

An excerpt from Such a Good Mother

The boy’s gold-­and-­maroon cap disappears around the corner. Jacq and I follow it and the squeak­squeak of his brogues as he turns down yet another dark, wood-­paneled corridor. I’m trying my best to be more sure-­footed, anticipate the turns ahead, ones I should know are coming. This was once my old high school and I must have been this way hundreds of times before, but either I’ve blocked my memories in the near twenty years since I last set foot inside this building, or everything about the place is as different as they say it is. I begin to wonder, if I was left alone here right now, whether I’d know how to get back out again.

My sister-­in-­law tracks the fast-­walking boy, oblivious to my queasy disorientation. “You’ll be walking miles tonight!” Jacq calls behind him, but the boy doesn’t seem to register her attempt at light­heartedness as he comes to an abrupt stop in front of a set of double doors.

“This is the registration zone. Welcome again to The Woolf Academy. We hope tonight helps you find the most appropriate setting to educate your child.” The boy can’t be more than ten, but he sounds like a gentleman from the 1940s. He has what people say is the Woolf polish. The boys and girls who go here emerge with the combination of manners and confidence, not to mention grades, they’d normally achieve only from attending some ancient public school, not a free school that’s been open only a few years. He shakes my hand, then Jacq’s.

“Cheers, little man. You like it here, then?” Jacq asks, causing the boy to blink and look about him nervously.

“The Woolf is the top-­performing school in the region. It strives to instill confidence and aspiration in every pupil.” The boy pauses, then nods at the ceiling with his eyes wide open, before snapping them shut, as if he’s trapping the words he needs to remember from somewhere above him. “Attending this school is a privilege.”

“Is that so?” Jacq sends raised eyebrows my way, the kind that say, Well, la-­de-­dah!, then goes to peer through one of the door’s small rectangular windows. “Better get ourselves in there, then.”

I go to peek through the other window and fail to still the gasp in my throat.

Now, at least, I know exactly where I am.

It’s the old school hall: double-­height ceiling and more wood paneling, a large open space with nowhere to hide. My insides twist, my body now unable to deny that the worst years of my life happened within these walls.

But that was then, this is the here and now, I tell myself. I’m not the same person the girls bullied here. I’m a mum, married to the man I love, with a respectable job at the bank. I’m not who those girls said I was.

Through the window, I can see in front of the hall’s stage two empty chairs waiting behind a long desk. Jacq pushes one of the double doors slightly ajar and a waft of familiar odors hits me: floor wax, snapped pencils, disinfectant. Whispers reach me from the freed air.

I steady myself against the doorframe.

I push the door on my side open and approach the deserted desk as confidently as I can manage, but the heels of my boots seem to make a terrible clatter, rupturing the silence. The hall’s lights heat the crown of my head so intensely it’s as if a spotlight is tracking my every step, and while I realize the ridiculousness of this paranoia, something inside tells me not to turn around, in case someone does indeed have me in their sights. Old habits.

“Hello?” I make myself speak, fearing Jacq’s about to shout something like, Come out, come out, wherever you are! But my voice is too quiet to be heard.

Laughter from somewhere needles my ears. My stomach squirms, memories I’m desperate not to disturb agitating closer to the surface. Me, alone, looking over my shoulder, then suddenly surrounded, stiff in the dead center of a ring of my tormentors.

“Anybody there?” Jacq calls.

A very thin blond woman emerges from another pair of double doors to the left of the stage. I breathe out, stealing a quick glimpse of the room behind her before the doors swing shut. I can see parents laughing loudly, people seeming to fizz with a confidence they wear so lightly they don’t even realize they have it. The doors close with a swish.

The blond woman wears a white boiler suit and huge silver bracelets that clunk as she walks toward the desk without even giving us a glance. It’s the first day of December and freezing, so I threw on my old three-­quarter-­length Puffa over my smartish black trousers and trusty (if faded) charcoal polo neck. But as the blond woman turns her eyes to me, my coat suddenly feels like a twenty-­tog duvet, shapeless and drab. I can sense a slight hesitation in her final step, as if she’s not keen on coming forward to us. I send an on-­duty smile to my face as the chair scrapes behind her and she sits, impatiently gesturing for me and Jacq to do the same.

“You’re thinking about applying to The Woolf Academy for your child?”

“That’s right.” I’m almost whispering, the old instinct to remain unnoticed and therefore safe is so strong. I need to regroup and fast. The blond woman hasn’t even bothered to introduce herself. She doesn’t look teacherly; her clothes suggest high levels of disposable income.

“Are you part of the teaching staff?” says Jacq before I can shake my shyness and ask myself.

“Ginny Kirkbride, clerk to the governors, admissions, and legal officer.” I’m taken aback by a gust of what smells like distinctly alcohol-­laden breath she releases as she speaks. “Boy or girl?” she asks no one in particular, eyes down on her tablet.

“My boy, Charlie,” I tell her. “He’s four next August, probably the youngest in his year, I’d imagine.”

Not a flicker on her face as she taps my responses into her tablet, while I berate myself for letting my worries over Charlie’s age bubble into the open.

“And how did you hear about The Woolf?”

“I live over the road. We rent the flat above the natural food and wine shop.” Ginny appears, for a moment, as if she has a nasty taste in her mouth. I can’t help but want her to think well of me. “I actually used to go here myself, only back when it was Amhurst Middleton High School, so you might say my son could be the second generation of O’Connells who’ve had the privilege of attending this school.” A flash of a grimace on her face leaves me in no doubt she disagrees with this perspective.

“And you are?” Ginny turns her chin and attention to Jacq, who’s been watching quietly with a patience I can sense thinning.

“Is the father not involved in his life?” Ginny looks at me directly for the first time.

“Yes. My husband, Pete, he’s looking after Charlie as we speak.”

“He doesn’t want to be involved in finding the right school for his son?”

“Of course he does, it’s only that . . .” I can’t seem to remember why we agreed Jacq would come with me tonight, not Pete. Whatever I say feels like it’s going to damn him, and me.

“In our family, we play to our strengths.” Jacq leans forward with a forgiving smile that isn’t returned, while I try to pick the words that will put Ginny right about Pete.

“My husband has a very strong interest in his son’s education, but Jacq’s studying for her degree at night school, anthropology. I suppose it made sense to bring the most educated person in the family.” My chest prickles with adrenaline, and while Ginny’s eyes return to her tablet, Jacq gives me a modest little nod. At least I’ve said the right thing in her eyes.

“And what is it you think your family might bring to our school community?”

I fluster. I don’t know what the right answer is. I’m not even sure I understand the question. Is this code for something I should know about?

Helen Monks Takhar is the author of the novel Precious You. She is also joint managing director of the production company Second Generation with her husband, screenwriter and executive producer Danny Takhar. Helen worked as a journalist, copywriter, and magazine editor after graduating from Cambridge University. She began her career writing for financial trade newspapers before contributing to UK national newspapers including The Times and The Observer. She lives in North London with her husband and two daughters. 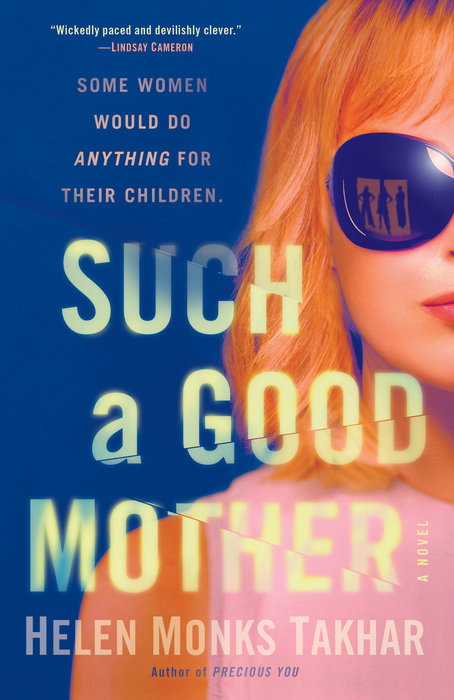