Book Two of The Bloodright Trilogy

Torn between loyalty and love, a young prince will learn how much he’s willing to sacrifice as he tries to destroy the rebellion that threatens his throne in the exhilarating sequel to Bonds of Brass.

Gal’s destiny has always been clear: Complete his training at the military academy, prove his worth as a royal successor, and ascend to the galactic throne. When a failed assassination plot against Gal sends him and Ettian—his infuriatingly enticing roommate—on a mad dash through the stars, Gal’s plans are momentarily disrupted. But he was born to rule the Umber Empire, and with Ettian by his side, nothing will stop him from returning home and crushing the growing insurgency threatening his family’s power.

Yet nothing is ever that simple in war—or in love. Gal is captured by the rebellion during a skirmish and faces public execution, his grand fate cut short. To save Gal’s life, Ettian does the unthinkable: He reveals himself as the secret heir to the fallen Archon Empire and rightful leader of the rebellion . . . and, therefore, Gal’s sworn enemy. Now a political hostage in this newly reignited conflict, Gal must use his limited resources to sabotage the rebellion from within, concoct an escape plan, and return to the empire he’s destined to lead. And if that means taking down the man he thought he loved?

An excerpt from Oaths of Legacy

There’s a quiet to captivity. Its monotony steals time. I can feel myself getting slower and duller to match it.

It’s the exact opposite of what I should be doing. If all had gone according to plan, I’d be at the Umber Imperial Seat right now, preparing to take my crown. I’d be caught in a tumult of meetings designed to bring me up to speed on the seven-­year handover process that would begin the day I turned eighteen. I’d be proving to my mother, Iva emp-­Umber, that I deserve wholeheartedly to take up her mantle—­that I am the perfect heir she raised. That’s all gone to hell now.

All of this is to say that my guard is solidly down when the man comes crashing through the grate on the ceiling.

I’m lounging on an ostentatious couch that used to belong to Berr sys-­Tosa, legs kicked up on a pillow, and for a moment I find myself locked in my messy repose as my body scrambles to inject the necessary adrenaline into my bloodstream. Two horrible, still seconds pass as the intruder locks his sights onto me.

I grab the pillow from behind my head and fling it at him, but it glances harmlessly off stealth-­black tac armor. I barely manage to snag the pillow at my feet and jam it up between us before he’s on me, his right hand swinging up with an obvious glint in it. The blade sinks into the pillow, the tip of it tearing free mere inches from my throat. The sight of it sparks something deep in my gut, a survival instinct so strong that for a moment my brain takes the copilot’s chair. I twist my arms, yanking the knife away from my jugular as I brace one foot on the sofa beneath me and lunge upward.

The assassin staggers back a step, giving me the space I need to snatch his wrist and lever his arm up over his head. The whites of his eyes flare in surprise, and I jam the heel of my hand up against the hilt of his blade, popping it out of his grasp before he can counter. The clatter of metal against the stone floor sends a pulse of relief coursing down my spine.

Then the man’s free hand latches around my throat.

He throws me down hard, nearly cracking my head open on the tiles. I’ve got one breath left in my lungs, and before he can tighten his grip, I holler, “Help!”

My brain slides back into the pilot’s chair just in time to realize what a waste that is. There are guards stationed outside my room, but their only order is to prevent me from getting out. They don’t care about anybody getting in—­in fact, they’d probably welcome the death of the Umber heir with open arms. Most people in this palace are solidly on the side of cutting off the Umber line of succession.

I’m one of the few holding out on the other side. I squirm as my throat collapses under the assassin’s weight, trying to wrench a knee up somewhere soft. All I find is more tactical weave, bruising me wherever I try to strike it. My hands scrabble fruitlessly at his wrists, a plea caught in my spasming windpipe. All my life, I’ve been surrounded by people who leap into action whenever someone tries to kill me. Bodyguards when I was a kid, growing up in the shadows of the Imperial Seat. Sleepers once I left its safety to study on Naberrie and train on Rana, in the heart of the former Archon Empire. And when that life and the secrets that propped it up shattered on a clear winter’s day in the skies above the academy—­

When the great Archon general Maxo Iral, risen from the dead, victorious in his bid to reclaim the old empire’s capital and have his vengeance on my parents for their conquest, held my fate in his hands—­

Fury strikes like flint, and my blood ignites. My gaze flicks sideways and catches the end table perched next to the couch. Within reach?

It had better be. I lash out with one hand, knocking over the glass of sweetwine I’ve been nursing. It shatters with a sharp, clear noise that doesn’t break the assassin’s laserlike focus on watching the life drain from my face.

Pity. If he’d looked, he would have caught the moment my fingers closed around the stone coaster.

A thrill washes over me the moment I slam it into his temple. I feel myself come back to life in the crunch—­all the way back, back from the languor that’s lasted so long that I’ve nearly lost track of the time I’ve spent here. His hands spring free as he instinctively reaches up to guard his head against another blow, and I choke down the breath I sorely need. But the air has its price; the assassin is already lunging for the knife he dropped. I surge to my feet and hurl the coaster at him, striking him hard on the back of his skull. He falters enough that I have the opening I need to leap on top of him.

No one is rushing in to save my life now. For the first time in nearly eighteen years, I have to do the damn thing myself. My fists rain down on the man’s head furiously, my stomach convulsing as I try to keep down the urge to gag long enough to stop him from killing me. I lose my rationality to the steady rhythm of beating him senseless, and for a moment I think I understand why Archon people like their drums so much.

It isn’t until a second set of arms wraps around me from behind that I come back to my senses. I buck and thrash against the grip, but they pin me tightly, yanking me off my knees, up and away from the twitching, groaning man I’ve left lying on the floor.

The first clear thought lodges in my head when I spot the coaster next to him—­Should have used that to finish the job, would have done more damage.

The next: What the ever-­loving rut is wrong with you, Gal emp-­Umber?

I’m half a second from throwing my head back into the nose of whoever’s grappling me when I note the emerald-­green stitching on their sleeves. Imperial-­guard uniforms, which means this is one of the two useless louts who were posted outside my door. Confirming that suspicion, the second surges past me, tucking a blaster back in her belt as she drops on top of my would-­be assassin and wrestles his arms behind his back.

“Oh good, you got him,” I say flatly, and she fixes me with a thin-­lipped look over her shoulder. I don’t dare articulate the concern that gripped me earlier. If they were hoping the assassin would finish the job, I’m sorry to disappoint.

My guard pulls the poor man to his feet, giving me a good look at my handiwork. His nose is crooked, one eye swollen shut, the lower half of his face painted in blood from a split lip. The slickness on my hands apparently isn’t just sweat. I reach back and wipe them on the uniform of the guard holding me.

A resigned sigh wheezes in my ear.

“Traitors,” the assassin chokes, spattering blood in the face of his captor. “That Umber whelp should be beheaded at the seat for the galaxy to see. Not kept in this ruttin’ jewelry box.” He rolls his eyes at the lavish appointments around us.

“He has a point,” I mutter, and the hands restraining me tighten painfully. My guards are well aware of the public opinion. The Archon people want to give the Umber imperials a taste of their own medicine. Justice for my mother’s execution of Marc and Henrietta emp-­Archon. They’ve been calling for my blood for weeks, but this is the first time anyone has had the gumption to take the matter into their own hands. I’m almost impressed, although that sentiment is dampened by the fact that he very nearly succeeded.

Probably on account of being kept in a ruttin’ jewelry box. If I were in a normal cell with normal round-­the-­clock surveillance, there’d be no chance someone could get within striking distance. But instead I’m kept in comfort and nearly got my throat cut if not for a fancy embroidered pillow.

“I’ll get this asshole to a cell and call in a perimeter check,” the female guard says. “You take the prisoner to the emperor and report the incident.”

I resist the urge to squirm out of the guard’s grip, even though he releases me a second later. My blood heats back up to a simmer in a flash. Cool it, hot shot, I tell myself, rolling my head from side to side as I wring my hands, trying my best to wipe some of the slickness off my skin. Absentmindedly, I muss my hair, as if that’s going to do anything to smooth it back from its unruly state. Probably shouldn’t have done that. Getting the blood and spit out later is going to be hell.

Emily Skrutskie was born in Massachusetts, raised in Virginia, and forged in the mountains above Boulder, Colorado. She attended Cornell University and now lives and works in Los Angeles. Skrutskie is the author of Oaths of Legacy, Bonds of Brass, Hullmetal Girls, The Abyss Surrounds Us, and The Edge of the Abyss.

Book Two of The Bloodright Trilogy 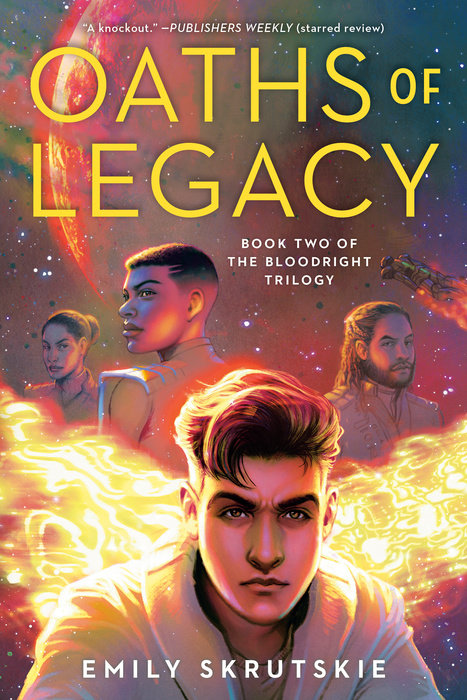