Book Three of The Bloodright Trilogy

Two young princes on opposite sides of a war must decide between loyalty and love in this galaxy-shaking finale of the Bloodright Trilogy.

“Skrutskie handily sticks the landing. Series fans are sure to be pleased.”—Publishers Weekly

Gal and Ettian have never been farther apart. Once, they were roommates and best friends, each suffocating under a secret of galactic consequence. When Gal’s came to light—that he was heir to the Umber Empire and all of its brutal conquest—the two were forced to flee their military academy, fall in with a brewing rebellion to reclaim the Archon Empire from Umber’s grasp, and face their long-held feelings for each other.

Then the rebellion discovered Gal’s identity and to save his life, Ettian had no choice but to unveil his own secret: that he was the long-lost heir to the Archon throne. With Gal as a political prisoner, Ettian began the fight to restore his own empire—and to open Gal’s eyes to the possibility of a galaxy reclaimed from Umber’s greed. But just when Gal was starting to come around, a team of Umber operatives rescued him from Archon’s clutches and dragged him home to take up his crown.

Now, separated for the first time and in full command of the might of their respective forces, the star-crossed rulers find themselves truly at odds. And with the war reaching a tipping point, the time has finally come for Gal and Ettian to confront what they owe their empires, their friends, and each other if they’re ever to forge a universe where the two of them can be together.

An excerpt from Vows of Empire

My stomach drops with the shuttle.

“Ruttin’ hell,” I mutter, one hand flying to catch the overhead straps, the other snapping to my forehead to keep my circlet from tipping off. It’s a gusty day over Ichano, and the pilot isn’t doing us any favors. My eyes catch Wen’s across the hold.

She gives me the subtlest shake of her head, a wry smile twisting her lips. I know she wants to storm the cockpit as badly as me. The pilot couldn’t stop either of us if we demanded he hand over the controls.

But both of us have higher duties than shouldering through turbulence.

So I grit my teeth through the utterly avoidable rattling and try to bend my focus back to my responsibilities for today. Beneath my feet sprawls Ichano, a newly liberated Archon city and the capital of Osar, a newly liberated Archon system. We’ve strung the second jewel in our belt after a month of fighting like hell—and all that my thoughts keep circling back to is that it’s been a month since Gal slipped past our fleet and disappeared into the black.

Because you let him, an ugly voice in my head reminds me. Because you gave him the Ruttin’ Hell and told the fleet to let it go. And then Gal refused, kissed me breathless against its hull, and told me he wasn’t doing a damn thing I said. I took him at his word. I wanted so badly for it to be real. For him to be choosing me, siding with me, throwing off the shackles of his bloodright to fight this war at my side.

It was the happiest I’d been in months. I practically floated out of that hangar.

As far as I can tell from the tattered scraps of the security logs, the moment I left was the moment Gal got to work. He hadn’t meant a word of it. All along, he’d been biding his time, waiting for his opening. From the holes in the camera footage and the drugged guards we discovered left in their wake, it seems his team sprang Hanji from her cell, rendezvoused with Gal, stole the powersuit, and flew the Ruttin’ Hell free from the Torrent’s core without a single person lifting a finger to stop them.

If it hadn’t torn my heart out, I’d almost be impressed.

Another gust of wind shakes the shuttle, and I let out a soft groan. No weather’s ever been enough to put a fear of flying in me— and I’ve flown through a hell of a lot worse—but the grating on my nerves is the last thing I need ahead of today’s event. “Five minutes to the drop,” the horrible pilot announces over the intercom.

Wen rises from her bench, resplendent in platinum-trimmed tac armor that almost makes up for the fact that she should be wearing that powersuit. Her feet are encased in a pair of boot prototypes welded to a carbon fiber exoskeleton that frames her hips—a poor substitute, but enough to get her airborne. Her vibrosword hilt is latched to the magnetic sling on her waist, a reminder that powersuited or not, she’s still the Flame Knight. To top off the look, her shoulders are mantled by a fine emerald cape that’s been cut with vents.

It takes the breath out of me a little to see her like this—though certainly some of that comes from the wound Hanji bored through my gut two months ago. Wen Iffan’s come a long way from the chaotic little troublemaker I found on the streets of Isla. I had no way of knowing the girl dressed in rags trying to sell me a skipship with no engines would one day singlehandedly win the battle for my birth system by taking out a dreadnought with nothing more than a powersuit and her sheer force of will, but there was a little voice in my head that day telling me to bet on her—a little voice that’s never steered me wrong.

“You’re staring,” she says, checking over the straps of her armor. “Again.”

When her eyes catch mine, my smile falters. No happiness of mine can stand up under scrutiny—especially not hers. I’ve tried to keep the effect Gal’s abandonment has had on me concealed, throwing myself headlong into the war effort. I’ve been burning myself out on strategy meetings and resourcing meetings and gods-of-allsystems-know-whatever-else I can involve myself in, praying that somewhere in the middle of all of it, I’ll shovel enough into the hole Gal left inside me to patch it over.

Wen hasn’t been faring much better. I’ve seen a darkness eating at her ever since the battle that claimed the Tosa System and cost us her mentor, Commodore Adela Esperza, in the process. After Esperza’s capture, Wen threw herself into repairing the damage her powersuit sustained at the Battle of Dasun. When Gal and his operatives stole it, she dug up the boot prototypes and all but stormed the battlefield. I feared for her, but she held her promise—the Flame Knight has burned enough for one lifetime. Even without the protection of the powersuit, even with Umber armies throwing everything they have at her, Wen Iffan is untouchable.

Within a month, we’d liberated a new Archon system, so . . . at least there’s that.

“C’mon,” Wen says, crossing the hold and laying her hands on my shoulders. “For the people, right?”

“For the people,” I echo numbly. The past month has ground me down to dust for the people. I’m their emperor. I was born to serve them, and it’s eating me alive. I pitch forward, letting my forehead rest against the cool shell of the armor plating her stomach. It grinds the circlet into my skin, but at least that wakes me up a little.

Above me, Wen huffs a sigh, barely audible over the rumble of the shuttle’s engines. “Look, I think there’s something I need to tell you.” Her grip on my shoulders tightens. “I can’t take watching you mope around like this anymore and if this . . . Okay, I’m just going to say it.”

“Wen?” I ask after the silence stretches on for an uncomfortable minute.

The pilot’s flying steady, but I feel like the shuttle’s just been shot out of the sky. “You . . . No,” I choke as my body locks rigid, braced for a spinout that’s only happening in my head. “No,” I repeat louder. I try to wrench back from her, but she locks one hand around the back of my head, keeping me from looking her in the eyes.

“I had to. I’m sorry—I had to. I struck a bargain, and when you filed the clearance for the Ruttin’ Hell to leave, I knew it was an opportunity I couldn’t miss.”

“You struck a bargain with Gal?” I seethe against her plating. The circlet digging into my forehead is the only pain that makes sense anymore, so I lean into it. “What could he possibly have offered—”

“I struck a bargain with Hanji Iwam.”

My stomach convulses involuntarily at the mention of her name, the scar burned across it twinging. Modern medicine has worked its miracles for my gut wound, but it can’t take away the memory that bullet seared into me. “I don’t understand,” I grind out, and Wen’s grip on me softens enough that I’m finally able to pull back and tip my head up to search her face for answers.

I regret it instantly. I can’t handle the way she’s looking at me—the way this is tearing her apart just as much. She’s trusted me so absolutely, and I thought I could trust her the same. “You told me you were going to set him free,” she says, her eyes glimmering in the hold’s low light. Another burble of turbulence hits the shuttle, forcing her to tighten her grip on me to keep upright. “You told me that we couldn’t protect him anymore.”

If I thought she was torn before, it’s nothing compared to the way her expression breaks now. “He did,” she says, her voice choking on a sob she’s desperately trying to suppress. The confirmation tears through me like she’s just speared me on the end of her vibrosword. “He fought. He didn’t want to go, but . . . It never would have worked. I know you wanted to believe—”

“I am emperor. I don’t need to believe. I can make it happen. I could have—”

“Ettian,” she murmurs, and even in the wake of a betrayal that should render us blasted apart, I still can’t stand to see the tears spilling haphazardly out of her eyes. I reach up and catch her scarred cheek, my heart seizing as she leans into the touch like she always does. “Tell me we would still be here, right now, above a liberated city on a liberated planet in a liberated system, if Gal was working freely at your side. Tell me you could have negotiated your way through the infighting on your advisory. Tell me you could have held up your legitimacy against Iral’s shadow.”

Her words saw their way to bone.

Emily Skrutskie is six feet tall. She lives and works in Los Angeles. Skrutskie is the author of Vows of Empire, Oaths of Legacy, Bonds of Brass, Hullmetal Girls, The Abyss Surrounds Us, and The Edge of the Abyss.

Book Three of The Bloodright Trilogy 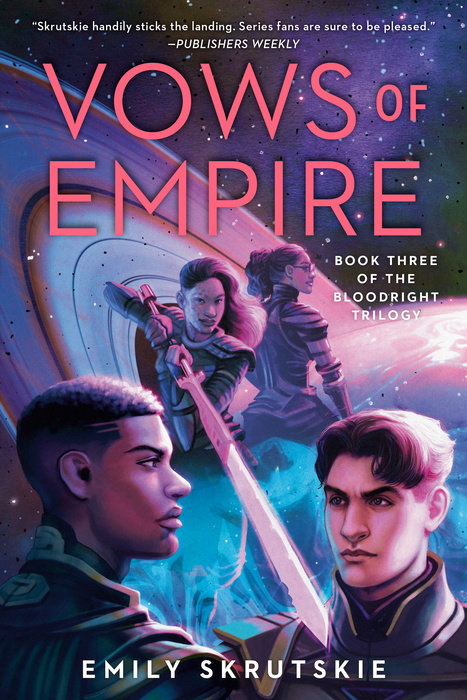