“This debut thriller reads like The Devil Wears Prada meets Single White Female. I couldn’t put it down.”—Catherine Steadman, author of Something in the Water and Mr. Nobody

She’s borrowed your life. But what if she decides to keep it?

Maggie, a freelance journalist, certainly knows she doesn’t measure up. But when she gets the temp job covering Margot’s maternity leave, Maggie seizes the chance to live a flashier life—even if it’s only for a few months.

But the simultaneous arrival of Margot’s baby and a brutal end to her oldest friendship sends Margot into a spiral of insecurity and suspicion; normal preoccupations of new motherhood turn into dark and frightening paranoia. Who is the vicious online troll mocking Margot’s facade of perfection and threatening to expose a dark secret she’s spent years concealing? Are Maggie’s newfound ambitions and plucky enthusiasm as innocent as they seem? And what happens when Margot is ready to return to her old life—especially if Maggie doesn’t want to leave?

An excerpt from The New Girl

I first felt the baby move the day Winnie’s son was born. Born, and died an hour later.

I had just stepped from the shower and wrapped a towel around my torso when, deep within, there came a faint throb of activity. A not-­quite-­roll but a barreling sensation nonetheless, like cresting a dip in the road. A single kick of a swimming stroke, a fillip, a half-­pipe completed in utero: the quickening.

It made me gasp, and feel faintly nauseous at the idea of something living inside me. Blame science fiction. Once, this moment spoke of the miracle of life, of the Divine Countenance smiling on the humble and the highborn alike, but these days, every pregnant woman’s reference point is an alien escaping a man’s chest cavity in a spray of gore.

I smiled then, as the goosebumps on my arms subsided. Later, I would remember my brief shiver of disgust and feel ashamed.

In those same minutes, Winnie’s boy was hurtling through hospital corridors in a tiny plastic cot, traces of his mother’s blood still clinging to his purplish limbs. By the time I saw the blur of messages and medical terms on my phone from my oldest friend—his heart had slowed, then rallied—and replied to them in a tumble of horror and relief, it had happened.

The next said, simply, He’s dead.

I called, but there was no answer. It didn’t cross my mind then that I might never speak to my best friend again, but the hollowing sensation that replaced the earlier sprightliness in my gut seemed to presage it—that this awful, awful thing might be the first in twenty years we wouldn’t be able to face together. Once the well-­wishers disperse and the casserole dishes have been returned, once time goes on and the seasons continue to change, mourning a child is a lonely business.

I left a voicemail and, after I hung up, couldn’t remember a word of what I had said. I sent a text: “I’m so sorry, I love you, I’m here when you need me.”

I have to get to work. I was due back in the office today after almost a month away at the shows. When I’d started out as an assistant and general dogsbody, I only went to fashion week in London, and even then on the sort of ticket that promised, at best, a standing spot at the back of a drafty hall or warehouse. From there, I’d had to crane my neck for a glimpse of the otherworldly creations below the models’ chins.

In those days, I remembered designers’ collections for the soundtrack and the hairstyles rather than the clothes—those I looked at online afterward. As I climbed the career rungs, I realized why so many fashion editors were obsessed with shoes: You could only see them once you’d secured your spot on the front row.

This season, I had been to New York, Paris, and Milan too, as I’d done twice a year for the past decade. Except this time, I carried my little swimmer with me, sat cocooning it on hard benches and plush brocade chairs, ushered him or her (we wouldn’t find out which, Nick didn’t want to) beyond the velvet ropes and black-­clad doormen at designer parties and luxury store openings, clinking champagne coupes without drinking from them.

I laughed at my extra passenger when I thought about how impossible it was to smuggle in a plus-one at these events—especially one who was quite so intent on locating and polishing off whatever elegantly minuscule amuse-­bouche happened to be offered on silver platters by waiters who looked like they’d been hewn from marble.

But I was back in London now and had to get to the office. They were choosing my maternity cover today. The person who would take over the job I’d spent ten hard years working for. The prospect of handing it over had seemed appalling, until now. All I could think of now was the little life that had failed to launch just a few miles away.

Winnie and I had been together just that weekend, chatting and giggling. Planning the months we would spend, loosed from our desks and free to roam in daylight hours, with each other and our tiny companions. A new coffee place with regulation bare brickwork and lightbulbs hanging on industrial cable had opened a few minutes’ walk down the road from my and Nick’s house, and Winnie’s bus stopped right outside it.

Winnie knew she was having a boy, had asked the sonographer to let her know as soon as he could tell. She wanted to be able to plan for him and to name him, she said, when I teased her about being a control freak. He had been Jack since twenty weeks.

I had gone to the loo in Winnie’s home—I seemed to spend most of my time sitting on one now, squeezing out a few drops every half an hour even though my bladder felt constantly full—and marveled at the rows of tiny white bodysuits hanging up to dry in my friend’s bathroom. Then again at the slatted wooden cot made up with bright white sheets, the changing table stocked with diapers, cotton wool, various lotions that even I had never heard of despite having to write about obscure and esoteric-­sounding beauty products every so often at work.

Winnie had always been more maternal than me, calmer, more patient, and more instinctive. Kinder, too. She would be such a natural mother that I was grateful for the five months between her due date and mine—five months of expert nurturing that I’d be able to crib from Winnie just as I had my best friend’s science notes at school.

I sat on the bus to the office, chest tight at the thought of all that prep, all the folding, stacking, straightening, the lining up of things just so for when Jack finally arrived; eyes stinging at the prospect of Winnie and her husband, Charles, going home to a house so loaded with anticipation it had practically hummed last weekend. I had a vision of their red brick terrace itself sagging with grief when two, rather than three, reentered it that evening.

They had seemed so ready to be parents—vibrating with potential, sparkling with nervous excitement. As Winnie had nested so thoroughly, Charles had been tying up loose ends at work. His plan was to be at home with them both for the first six weeks of Jack’s life.

“We’ll probably end up killing each other,” Winnie had laughed last Sunday. “Being under each other’s feet for so long.”

I doubted either of them would even raise their voice to the other in that time. They never did.

There was not a note of disharmony between them, as Charles went back and forth from the kitchen, bringing us mugs of tea, fetching the various baby props that Winnie called out for in her show-­and-­tell for me of what they had amassed ahead of the birth. He’d been as enthusiastic as she was, as pregnant with the father that he would become as she was full of baby.

More than just another protective husband, Charles reminded me of those dogs that refuse to budge from their pregnant owner’s side. He couldn’t do enough for Winnie; he was devoted to her. He had learned foot massage from YouTube. When the time came for them to say goodbye to me, he stood next to her on the front step with his arm protectively around her as they waved me off.

The next scene should have been his opening the door to me to introduce his brand-­new son. Not this.

I usually read the news on my phone on my journey into work, but today my eyes absorbed no sense of the words in front of them. As the double-­decker made its way through the smog-­hazy streets of southeast London, I tried to reconcile the Jack we had all been waiting for, and all the potential he represented, with this dead baby, cried and keened over instead of cuddled and cooed at, still now where he had squirmed under the tight skin of Winnie’s belly only days ago.

It was as though I had woken in a parallel universe, showered and dressed in one and boarded the number 40 to this bizarre new destination. Back in the real world, Jack was surely freshly delivered this morning, warm and snuffly in his mother’s arms—arms that, as my most adored friend and loyal champion, Winnie had pressed around me so many times, too.

But my own baby had now moved in this alternate reality. It had asserted its presence, its existence, its claim on me and on the world. And it was the most real—the most alive—thing I had ever felt.

Harriet Walker is the fashion editor of The Times (UK) and author of The New Girl. She has been a journalist for more than a decade and has also written for Vogue, Elle, and Harper's Bazaar, among others. Born in Glasgow and raised in Sheffield, Walker studied English at Trinity College, Cambridge, and now lives in South London with her husband and daughter. 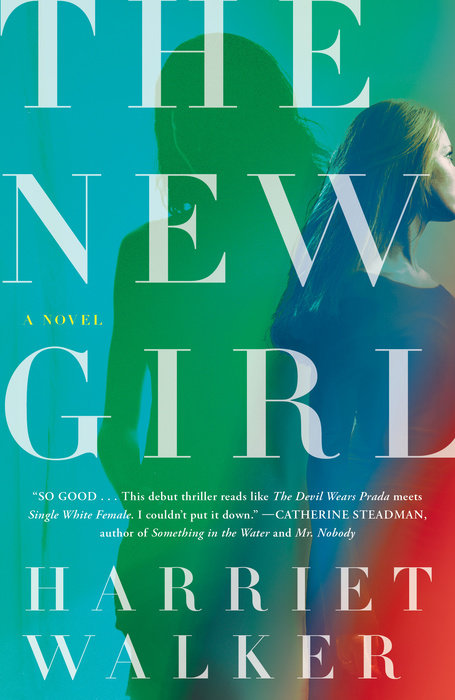