Alphabet Squadron’s hunt for the deadliest TIE fighters in the galaxy continues in this Star Wars adventure!

News of the New Republic’s victory still reverberates through the galaxy. In its wake, the capital ships of the newly legitimized galactic government journey to the farthest stars, seeking out and crushing the remnants of imperial tyranny. But some old ghosts are harder to banish than others. And none are more dangerous than Shadow Wing.

Yrica Quell’s ragtag Alphabet Squadron still leads the search for Shadow Wing, but they’re no closer to their goal—and the pressure to find their quarry before it’s too late has begun to shake them apart. Determined to finish the fight once and for all, Quell works with New Republic Intelligence’s contentious Caern Adan and the legendary General Hera Syndulla to prepare the riskiest gambit of her starfighting career—a trap for Shadow Wing that could finish the chase once and for all.

But in the darkness, their enemy has evolved. Soran Keize, last of the Imperial aces, has stepped into the power vacuum at the head of Shadow Wing, reinvigorating the faltering unit in their hour of need. Once adrift in the aftershocks of the war, Keize has found meaning again, leading the lost soldiers of his unit through to safety. The only thing standing in his way? The most mismatched squadron in the New Republic Navy, led by his former mentee: the traitor Yrica Quell.

Six Trillion Suns and None

On Polyneus, where Wyl Lark was born and lifted into adulthood by the Sun-Lamas of the Hik’e Matriarch, the word city was synonymous with garden. Settlements on Polyneus grew on canyon walls like moss and sprouted from forest floors, cultivated and tended by their residents. In Cliff, where Wyl learned to fly the suravkas, the streets flooded and changed with every monsoon, and the residents rearranged their homes to suit what fate and drainage made of the landscape.

Wyl had traveled to many worlds since leaving Polyneus. On Troithe he realized he had never truly seen a city before.

The engines of his RZ-1 interceptor thundered as he banked away from a massive façade of midnight metal and gold-plated arches, hurtling between towers and under tram lines. Above the lines of digital billboards solar projectors cast their midday light. Bright against the black sky, they guided Wyl through the urban labyrinth.

“Tell me you’re not running, brother?” The voice coming through Wyl’s comm was barely audible over the noise of the A-wing. Nath Tensent sounded amused.

“Not running,” Wyl said. “Circling around.”

“That’s a big circle. You’re off my sensors.”

“Maybe because your equipment is older than I am,” Wyl returned, but he forgot to smile and he wasn’t listening to himself. He angled his fighter into a cloud of smoke, specks of ash smearing his canopy as he reduced speed. He wrestled with throttle and repulsor controls, looking only at his scanner—visuals told him nothing—and his stomach lurched as the A-wing dropped a hundred meters and exited the cloud.

To his right, a multi-level speeder port rose out of view. Sections of three stories spewed jets of flame—the source of the smoke cloud—while crimson particle bolts sprayed another two levels, pockmarking metal and chipping duracrete slabs. Wyl veered away from the flames and into the storm of bolts, watching his shields shimmer as he banked hard and felt his harness bite into his side.

He glimpsed pavement far below and two groups clashing along the boulevard. The particle bolts battering the speeder port (and—at the moment—Wyl’s deflector screens) were aimed at a UT-60D “U-wing” transport hovering twenty meters above one group of combatants and unleashing its weaponry onto the second. Wyl processed the image in less than a second, steering his ship with his body as his vision glimmered with spots. “Kairos?” he asked. “You need an assist?”

He avoided colliding with a metal spire—decorative architecture or obsolete technology, he wasn’t sure—as a low tone sounded over the comm.

That’s a negative, Wyl thought, and flinched at the roar of the U‑wing’s laser cannons.

“What she needs”—Nath’s voice again—“is for us to handle our target. I’m making my attack run in about ten seconds. You want high or low?”

“High,” Wyl replied, and swung his fighter down an avenue perpendicular to the main boulevard. His eyes sorted through structures filling the horizon—domed opera houses and shopping spirals, stacked spheres of cracked crystal that had once hosted sporting events—and focused on the titanic metal fiend striding toward him on four spindly legs. Its arched back led to an insectoid head bearing twitching gun barrels in place of mandibles, and its plating was scored by blaster impacts and coated in dust and ash. Though it was dwarfed by the surrounding buildings, it moved among them like a predator through grass.

Wyl had seen its kind in holograms. He’d heard Sata Neek and Sonogari tell stories of Imperial walkers marching in platoons capable of leveling spaceports. This particular monster might have been a cargo-carrying model—one of the ground troops had said as much—but one shot would still suffice to incinerate a dozen of the soldiers below.

So Wyl went high, streaking toward the walker’s head to seize its attention before bobbing and rolling as energized particles ripped through the air. He went high despite the fact that the walker’s fire would, if it failed to obliterate Wyl, tear into the neighboring structures. It would pierce the domes of opera houses and shatter crystal arenas; it would turn Troithe’s history to dust.

But it would leave the New Republic infantry intact.

Wyl cut his throttle, allowing the walker’s targeting sensors to track him. Cannon blasts screamed loud enough to shake his bones and illuminated the world like lightning. He rocked in his seat, flight helmet smashing against the headrest, and tried to stay one step ahead of his foe.

“You see it?” he whispered, and nearly bit his lip as the A-wing jolted. “Nath’s coming. Just a few seconds.”

A sensor blip grew brighter. “You talking to your ship again?” Nath asked.

Wyl laughed, loud and unembarrassed, as he spotted Nath’s Y-wing bomber racing ten meters above street level. Wyl flew on past the walker, out of its targeting zone, and the bomber launched its ordnance with the sound of a thunderclap. He looped around, ready to provide covering fire to allow Nath a second firing pass, but crackling arcs of electricity already poured off the now-motionless walker’s hull. “Ion torpedoes, direct hit,” Nath reported. “Think I got it.”

The walker raised a single leg, its metal struts and pistons trembling arthritically. Its head tilted and the machine’s weight shifted. Gravity did its inexorable work. Wyl watched as—slow as a leaf drifting from an autumn tree, then swift as an avalanche—the walker toppled to one side.

A round tower walled in broken advertising screens, restaurant balconies, and boutique windows was poised to receive the brunt of the impact. The falling walker’s body connected somewhere around the seventh floor, compacting the building’s frame and tearing through metal support beams. Energy continued to ripple across the armored vehicle, briefly causing exposed power conduits and battery stations in the building’s wall to flare. As the walker’s head struck durasteel, the structure seemed to undulate and Wyl heard a noise like mortars firing as—story by story—the building began to disappear into a mass of rubble and fire.

A moment later the fallen walker burst as if stuffed full of flames; then it was completely buried. Dust made it impossible to see anything more, though the sounds of collapse and incineration continued.

Someone was cackling over the comm. “Pretty sure you got it. Appreciate the help, though.” It was a woman’s voice. Not one Wyl recognized.

Wyl brought his A-wing up and around, out of the dust cloud and back toward the ground troops. He forced himself not to look back. His canopy was plastered in soot.

“Your mission, you mean? We should be getting word from the insertion team soon,” the woman said. “Kind of glad you downed that tower, though—would’ve made a perfect sniper nest.”

Wyl checked his scanner, saw no one airborne but Nath and Kairos, then shot a glance toward the boulevard and the infantry. The band of soldiers was cautiously retreating from the blossoming dust cloud and passing out of the shadow of the U-wing. “No civilian sightings?” he said. He kept his voice level.

“Not in the six hours since we entered the district.” The woman’s voice dropped in volume as she shouted orders at her cohorts. Then she resumed: “This all used to be an entertainment center, according to the brief. Big investment when the Empire first came in, pretty well abandoned now.”

“Copy that. And tell your U-wing she’s blocking my light.”

At this, Wyl managed to smile. If only there were light to block, he thought, but instead relayed the message to Kairos, who crept barely ten meters away from the squad. The illumination from the dimming solar projectors seemed no brighter.

Wyl caressed his console absently in search of a rattling plate. The dust continued to churn and dissipate. His mind veered between thoughts of the destruction and thoughts of the insertion team descending through the undercity.

“You know we were careful as we could be,” Nath said. He’d switched to a private channel. “She was a fine-looking building but not worth tearing up over.”

“Target acquired! Three Imp guerrillas bagged, cuffed, and ready for interrogation.” The woman’s voice broke through. “Insertion team’s done the job you flyboys are six tons too heavy for.”

“Got it.” Wyl focused on the console, adjusting his communications settings and linking to Troithe’s long-range network. “Let’s see if we can get a signal out—we’ve got people waiting.”

Alexander Freed is the author of Star Wars: Battlefront: Twilight Company and Star Wars: Rogue One and has written many short stories, comic books, and videogames. Born near Philadelphia, he currently resides in San Francisco, California. He enjoys the city's culture, history, and secrets, but he misses snow. 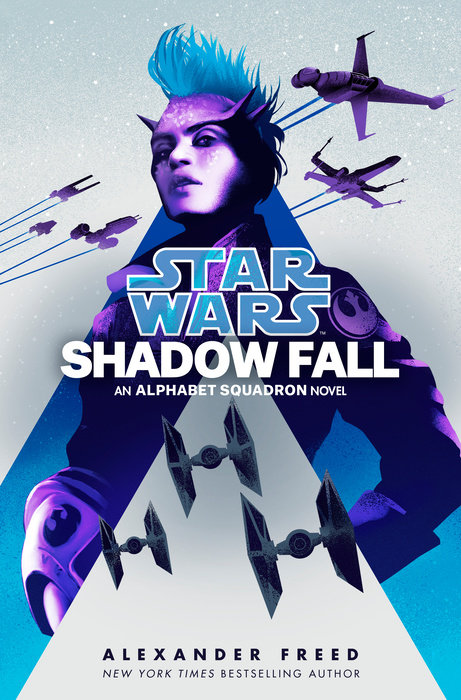