Is peace an aberration? The bestselling author of Paris 1919 offers a provocative view of war as an essential component of humanity.

“Margaret MacMillan has produced another seminal work. . . . She is right that we must, more than ever, think about war. And she has shown us how in this brilliant, elegantly written book.”—H.R. McMaster, author of Dereliction of Duty and Battlegrounds: The Fight to Defend the Free World

The instinct to fight may be innate in human nature, but war—organized violence—comes with organized society. War has shaped humanity’s history, its social and political institutions, its values and ideas. Our very language, our public spaces, our private memories, and some of our greatest cultural treasures reflect the glory and the misery of war. War is an uncomfortable and challenging subject not least because it brings out both the vilest and the noblest aspects of humanity.

Margaret MacMillan looks at the ways in which war has influenced human society and how, in turn, changes in political organization, technology, or ideologies have affected how and why we fight. War: How Conflict Shaped Us explores such much-debated and controversial questions as: When did war first start? Does human nature doom us to fight one another? Why has war been described as the most organized of all human activities? Why are warriors almost always men? Is war ever within our control?

Drawing on lessons from wars throughout the past, from classical history to the present day, MacMillan reveals the many faces of war—the way it has determined our past, our future, our views of the world, and our very conception of ourselves.

An excerpt from War: How Conflict Shaped Us

“War is waged by men; not by beasts, or by gods. It is a peculiarly human activity. To call it a crime against mankind is to miss at least half its significance; it is also the punishment of a crime.”—Frederic Manning, The Middle Parts of Fortune

If you visit the lovely Alpine town of Bolsano you will often see long queues outside the South Tyrol Museum of Archaeology. People wait patiently, many with their children, to see one of Bolsano’s main attractions: the mummified body of a man who lived around 3300 b.c. Ötzi—the Iceman—died before the Pyramids or Stonehenge had been built yet the ice kept his body and possessions intact until he was found by two hikers in 1991. He wore a cloak made from woven grass and clothes, including leggings, boots and a cap, made from leather. His last meals, still in his stomach, were dried meat, roots, fruits and possibly bread. He was carrying wooden baskets and various tools, including an axe with a copper head, a knife, arrows and parts of a bow.

It was assumed at first that he had lost his path in a snowstorm and died alone, to be left undisturbed for the next five millennia. It was a sad story of an innocent farmer or shepherd. In the next decades, however, thanks to advances in medicine and science, it became possible to examine the body more closely, with CT scans, X-rays and biochemical testing. Ötzi had an arrowhead embedded in one shoulder and his body was bruised and cut. His head had apparently been hit too. It is most likely that he died of the wounds he received from his attacker or attackers. And it is possible that he had at some point killed others, judging by the blood found on his knife and an arrowhead.

Ötzi is by no means the only piece of evidence we have that early humans, certainly by the time of the later Stone Age, made weapons, ganged up on each other and did their best to finish each other off. Graves dating back to Ötzi’s time, and earlier, have been found across the globe, from the Middle East to the Americas and the Pacific, containing piles of skeletons which bear the marks of violent death. Although weapons made of wood and skins generally do not survive, archeologists have discovered stone blades, some still buried in the skeleton.

Violence seems to have been present even earlier, during much of the greatest part of our human story in fact, when our ancestors lived nomadic lives foraging for edible plants and killing other creatures for food. Much of what is known is naturally highly speculative. Collecting and reading evidence, especially the further into the past you go—and humans appeared on earth some 350,000 years ago—is extraordinarily difficult, but we are gradually accumulating more thanks to archeological discoveries and scientific advances such as the reading of ancient DNA. Until very recently in humanity’s long history, we now know, we organized ourselves into small bands scattered across the more temperate parts of the globe. There was not much in the way of material goods to fight about and presumably if a band came under threat from others it could simply move away. For much of the twentieth century, those who studied the origins of human society tended to assume that the early nomadic bands lived a peaceful existence. Yet archeologists have also discovered skeletons from this long-distant period whose injuries suggest otherwise. Anthropologists have tried to get at what that world was like by looking at the few hunter and forager societies that survived until the modern age. It is a roundabout path with potential pitfalls: outsiders who observe such societies bring their own preconceptions and contact itself brings changes.

Having said that, there are some suggestive findings. In 1803, for example, a thirteen-year-old boy, William Buckley, escaped from an English penal colony in Australia and found refuge among the Aborigines for the next three decades. He later described a world where raids, ambushes, long-running feuds and sudden and violent death were part of the fabric of society. At the other end of the world, in the harsh Arctic landscape, the first explorers and anthropologists found that the local inhabitants, Inuit and Inupiat among them, made weapons including armor from bone and ivory and had a rich oral tradition of stories of past wars. In 1964 Napoleon Chagnon, a young American anthropology student, went to do fieldwork among the Yanomami people in the Brazilian rain forest. He expected that they would confirm the then prevailing view of hunter-foragers as essentially peaceable. He found that within each village the Yanomami lived for the most part in harmony and were gentle and kind with each other, but that it was a different matter when it came to dealing with other villages. Then differences were settled with clubs and spears, and one village would raid another to kill the men and children and abduct the women. In his thirty years of observations, he concluded that a quarter of Yanomami men died as a result of violence.

While there are heated exchanges—wars, indeed—of words and ideas between historians, anthropologists and sociobiologists, the evidence seems to be on the side of those who say that human beings, as far back as we can tell, have had a propensity to attack each other in organized ways—in other words, to make war. That challenges us to understand why it is that human beings are willing and able to kill each other. It is more than an intellectual puzzle: if we do not understand why we fight we have little hope of avoiding future conflicts. So far there are many theories but no agreed answers. Perhaps war is the result of greed or competition for dwindling resources—for food, territory, sexual partners or slaves. Or are we shaped by biological ties and shared culture to value our own groups, whether clans or nations, and fear others? Like our cousins the chimpanzees, do we instinctively lash out when we feel threatened? Is war something we cannot help doing or is it something we have constructed through ideas or culture? Since war and the fear of war are still very much with us in the twenty-first century, the answers to such questions matter.

War would not be possible without our willingness to kill, but that alone does not define it. We would not describe two men fighting in a bar or even a dozen or so gang members battling in a street or a park as making war. Violence leading to injury or death is part of war, but we tend to see that as a tool of war, not as an end in itself. The great German theorist Carl von Clausewitz, in one of his most famous observations, said, “War is an act of violence intended to compel our opponent to fulfill our will.” War has a purpose whether it is offensive or defensive. As with individuals or gangs, fighting war can be about honor, survival or control, but it is distinguished from a bar fight by its scale and its organization. War involves dozens, hundreds, thousands, even millions rather than one or a few people committing violence on each other. It is a clash between two organized societies which command the adherence of their members and have existed over considerable time, usually in their own territory. As Hedley Bull, the English political theorist, put it, “Violence is not war unless it is carried out in the name of a political unit . . . ” And, he went on, “Equally, violence carried out in the name of a political unit is not war unless it is directed against another political unit.” Gangs are organized and their members can claim to share values and goals, but they are not stable political and social units. They might of course become so and grow in size and in time become clans, tribes, chiefdoms, baronies, kingdoms or nations which are capable of engaging in war.

One of the many paradoxes of war is that humans got good at it when they created organized societies. Indeed the two developments have evolved together. War—organized, purposeful violence between two political units—became more elaborate when we developed organized sedentary societies and it helped to make those societies more organized and powerful. It was only 10,000 years ago—an instant in the much longer human story—when some of us started to settle down and become farmers, that war became more systematic and started to need special training and a warrior class. Along with graves in different parts of the world, archeologists have found evidence of fortifications, in Turkey for example, which date back to at least 6000 b.c., and of clusters of dwellings which appear to have been burned down deliberately. With the advent of agriculture humans were more tied to one place and had more worth stealing, and worth defending. And to defend themselves they needed better organization and more resources, which in turn led to groups expanding their territory and growing their populations either peacefully or through conquest.

Margaret MacMillan received her PhD from Oxford University and is now a professor of international history at Oxford, where she is also the warden of St. Antony’s College. She is a fellow of the Royal Society of Literature; a senior fellow of Massey College, University of Toronto; and an honorary fellow of Trinity College, University of Toronto, and of St. Hilda’s College, Oxford University. Her published works include The War That Ended Peace: The Road to 1914, a New York Times Notable Book; Dangerous Games: The Uses and Abuses of History; Nixon and Mao: The Week That Changed the World; Women of the Raj: The Mothers, Wives, and Daughters of the British Empire in India; and Paris 1919: Six Months That Changed the World, which won the Samuel Johnson Prize, the PEN Hessell-Tiltman Prize, and the Duff Cooper Prize and was a New York Times Editors’ Choice. 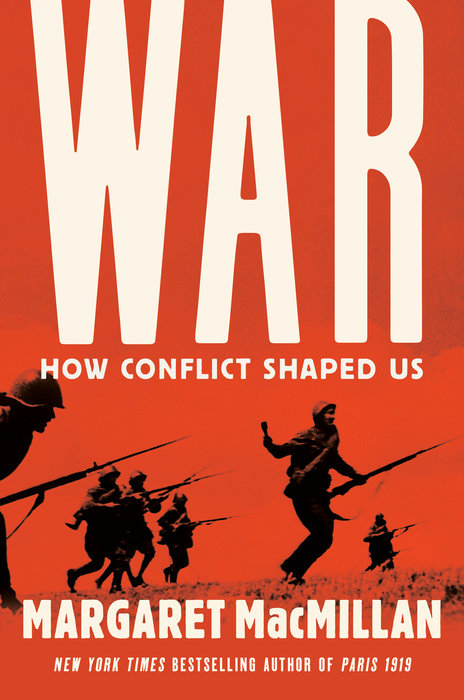