A film-obsessed romantic rewrites the script to understand why his “picture-perfect” love story crashed and burned in this wonderfully clever debut.

Ellie had the quizzical eyebrows of Broadcast News–era Holly Hunter and the neon-red hair of Kate Winslet in Eternal Sunshine of the Spotless Mind. At least that’s what caught Nick’s attention when he met her on the night of 2008’s historic presidential election. A cinema buff and devotee of great love stories, Nick always fancied himself the Tom Hanks of his own romantic comedy, and when sparks flew with Ellie that night, he swiftly cast her as the Meg Ryan of his story. For four blissful years, Nick loved Ellie just as he loved his job as a film projectionist: wholly, earnestly, cinematically.

But now Ellie has moved out, convinced that “the fire’s gone,” and Nick is forced to sift through his memories to figure out where it all went wrong. That night was a perfect meet-cute, yes, but was their romance as destined for a “happily ever after” as he’d thought? Was he really the rom-com hero he believes he’d been? Or did this Harry let his Sally down? Peppered with references to beloved movies, Love, Unscripted explores how even a hopeless romantic can learn that in real life, love isn’t—shouldn’t be—like what we see in the movies.

An excerpt from Love, Unscripted

I’m still thinking about Leon Woodward kissing Sally Carter when the fire starts. It isn’t a big fire, just the melting of an inch-long piece of plastic, but the smoke sets off the alarms. I pull the film from the projector and stamp out the flames as an extremely anxious and very sweaty Seb comes running into the booth.

“Ah shit, what happened?” he asks, with an exasperated tone I assume has less to do with the problem at hand and more to do with the paperwork he’ll have to fill out later.

“The gate got stuck, the lamp was on, A plus B equals man fire,” I explain.

“Nick, you have to strike the lamp after you’ve got the loop running.”

I scratch at the hair on my chin and cheeks. The two weeks’ growth of a boyfriend in a coma.

It’s not like I have a particularly bad memory. I can recite the entirety of the Pacino/De Niro coffee-shop conversation from Heat and can remember the exact order in which the eleven jurors are turned by Henry Fonda in Twelve Angry Men—it’s Juror #9, Juror #5, Jurors #11, #2, and #6 at the same time, Juror #7, then Juror #12 and Juror #1. Juror #12 changes his mind but switches back with Juror #10 and Juror #4, leaving just Lee J. Cobb breaking down in the final reel as Juror #3. But I can never retain certain key information about the inner workings of the projectors. A small part of me thinks they might lose their magic if I know exactly how they work. If I ever mention this to Seb, he’ll probably fire me.

I nod. It was my idea to name the projectors after my celluloid heroes, and Booth 3 houses both Humphrey and Katharine, Screens 6 and 7.

I know what he’s getting at.

He gives me the international face of “Really?”

“I’m absolutely fine. It was just a little fight.”

His eyebrows rise enough to add an exclamation mark to the “Really?” And a “Really?!” is harder to brush off.

“You spoke to Ellie?”

He shouldn’t have spoken to Ellie.

“She rang me. She wanted to make sure you were okay.” He pauses, not for dramatic effect, although it has that result. “She told me she’d moved out.”

It’s true. She moved out a week ago, but I convinced myself she’d move back in quickly enough that I wouldn’t need to tell anyone. I was approximately two days away from dressing up in her clothes and waving at people from the window in order to convince friends and neighbors that everything was still a-okay.

“It wasn’t a little fight,” I confess.

Seb’s “Really?!” face collapses into one of such pity it’s all I can do not to well up. We both suggest a cigarette break at the same time.

“I think the fire’s gone,” Seb assures me.

I first met Ellie at a 2008 election night party held by a mutual friend of ours who just happened to be a libertarian. Normally I would balk at being near anyone who would describe themselves as such, but Tom had a big house, good weed, and an encyclopedic knowledge of Asian cinema. That he was the only person in south London who wanted John McCain to win wasn’t quite enough to counter these excellent qualities, and the fact that he’d only invited thirty or so twentysomethings, who were all sane non-libertarians, was typical of him. He hated people agreeing with him, loved confrontation, and would almost exclusively start arguments with the phrase “I’m just saying.”

He addressed a crowd of five.

“I’m just saying, you lefties all fawn over Obama, but policy for policy he has more in common with Cameron than Brown.”

A clueless twentysomething in a beanie hat took the bait.

“So you want another four years of the same regressive Republican agenda that took the UK into two wars?”

Ellie entered my life half watching David Dimbleby informing us the polls for Kentucky, Indiana, and Georgia would close in forty-nine minutes, and half watching Tom take on the hipster. A wry smile crossed her face; she knew full well what he was doing. It was that smile that got me. I’m a sucker for any kind of smile, but a wry one just floors me.

Her smile was one of the first things I remember really liking about Ellie. The second was the way she tucked her hair behind her ears. There was a surety in the action. Maybe it was because as a teenager I was teased about my sticky-out ears. I even grew long hair to cover them. To see someone purposefully putting theirs on show made me want to yell out, “Good for you!”

That in a certain light she looked like Holly Hunter when Holly Hunter was in her mid-to late twenties—so Broadcast News–era Holly Hunter—certainly didn’t inhibit my attraction. They shared the same quizzical eyebrows and flawless skin. Plus, she had Kate Winslet’s neon-red hair from Eternal Sunshine of the Spotless Mind and wore the most nondescript zipped-up gray hoodie and navy jeans, like she was paradoxically trying not to be noticed yet screaming, “Look at me!”

It took me forever to make my move. I became paranoid I’d been staring at her and she’d noticed and was now wondering who this weirdo creep with massive ears and . . . ​Wait . . . ​were we wearing the exact same hoodie?

I grabbed two beers from the kitchen and went for it, handing her one and observing, “You must have seen Tom do this before to smile like that.”

She squinted slightly, viewing me with the requisite amount of skepticism with which you should view someone who comments on your smile, and took the drink.

“He certainly has a need to be disliked,” she said, elongating the vowels in “need”—an Elliesque idiosyncrasy I have since found both adorable and infuriating in equal measure.

We watched as Tom stepped his attack up a notch with a one-two of questions on the difference between the House and the Senate, and a much more aggressive than passive investigation into his opponent’s previous UK election-viewing habits, to which the hipster could only respond with a shake of the head.

Tom was obliterating his foe with a smile in his eyes. I could see where this was heading and gave my insight to Ellie.

“If that guy mentions hope or change, he’s done for.”

The hipster was taken aback by this outburst and looked around for help, but none was forthcoming. On the contrary, if there’d been popcorn, it would have been opened and passed around for the crescendo.

“I will happily have a debate with you about the rights and wrongs of universal healthcare, military spending, or the antiquated penal system of America. But I am f***ed if I’m going to stand in my own home and try to form a cogent argument over two-bit slogans. Jesus Christ. Hope. Change. You moron. Those posters might as well have said ‘Kittens’ and ‘Puppies.’ Nobody is against hope. Or change. Everyone loves change as long as it’s vague enough. I had genuine respect for you when you were arguing the ins and outs of foreign policy. But this. This is beneath me.”

The doorbell rang and Tom—without missing a beat—patted the victim on the arm and departed to answer it. But not before giving me and Ellie a wink on the way.

“He’s good,” she said in a way that made me a little jealous, again bringing several extra vowels to the word.

“He almost convinced me to join his anti-tax group when we were at university,” I said, stopping for a sip. “Before I remembered I like roads and hospitals and libraries and that I’m not an arsehole.”

“Is that where you know him from? University?”

“Yeah. You? You’re not part of his anti-tax group, are you, because if so, I didn’t mean the thing I said just then about them all being arseholes.”

She let out a short, sharp laugh, her brown eyes twinkled, and my heart soared.

Owen Nicholls is a screenwriter with a master’s in script writing. He lives in Norwich, England with his family. 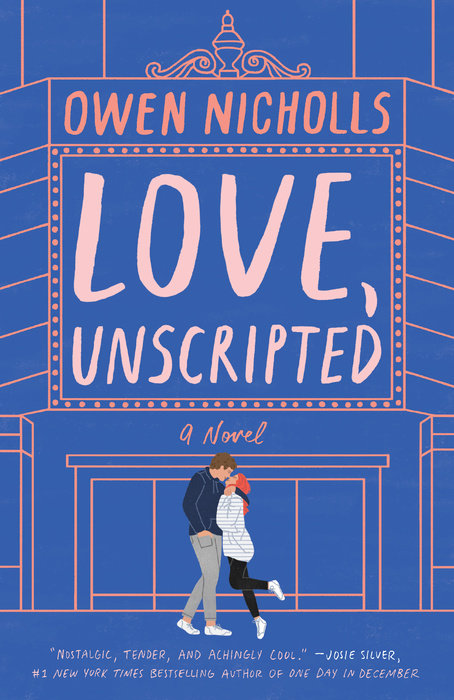