From the author of Love, Unscripted. . . . They’re perfect for each other. But what happens when you meet the right person at the wrong time—over and over again?

“A modern-day love story with an old-fashioned warmth.”—Debbie Johnson, author of Maybe One Day

Up-and-coming musician Tom thinks he met the love of his life one night a year ago, but thanks to a made-up girlfriend, he’s pretty sure he’s never going to see her again. If it weren’t for the painkillers the doctor had given him for his dislocated shoulder, he could’ve explained what really happened. But now the moment for explanations has gone, so he just keeps writing songs about her in the wild hope that she’ll hear one on the radio and understand.

Jess thinks she met a cheating liar one night a year ago, but much to her chagrin, she can’t seem to stop thinking about him. When she finally decides to take it upon herself to tell Tom’s girlfriend what happened that night, she finds out that the truth isn’t quite what she thought it was. But by then it’s too late—she’s headed to the other side of the world to launch her comedy career.

As the years go by, Tom and Jess are never far from each other’s thoughts. But every time it seems that there might be a way for them to move forward, something else conspires to keep them apart. In life and in love, timing is everything—but will Tom and Jess ever manage to get it right?

An excerpt from Perfect Timing

I don’t talk out loud to my grandad. It feels unnatural when I see other people do it. Like they’ve seen it in a movie and thought it worth copying. I do still talk to him, though. Just in my head. I tell him about what’s happened over the last month. I tell him about my band and the music and how things are going pretty well. And today, I tell him about the girl in the coffee shop, because, why not?

“It would be handy,” I confess through the power of thought, “if I didn’t instantly fall in love with anyone who threw a smidgen of attention my way. I mean, all she did was, maybe, smile at me and I was fantasizing about us owning a cat, a cot, and a cottage by the sea.”

I conjure up a response from him. “That sounds like a nice dream.”

The cemetery is deserted. The sun high enough in the sky to cast only tiny shadows on the rows and rows of headstones taking the form of crooked teeth in the ground.

Grandad reminds me, “Back to this girl in the café?” His invented interruption takes me back to drinking coffee an hour before. I couldn’t describe what she looked like now. For any would-be criminal, me doing an e-fit of them would be the equivalent of a get-out-of-jail-free card. I do remember her brown hair and brown eyes. I have a type, after all. But as time and distance grow between us, her face fades.

“What would Sarah think of all this?” Grandad replies with his bark of a laugh.

Sarah is my girlfriend. Sort of. She, rather coincidentally, also lives in Sheffield, so when I take the trip from Edinburgh I can kill two birds with one stone. Visit my grandfather’s final resting place and see my fictitious other half. I made Sarah up after the boys in the band started questioning why I wouldn’t talk to any girls after our gigs. Instead of confessing that I have crippling anxiety—that seems to be worse around the opposite sex—I thought it slightly more manly to just pretend I had a girlfriend who lives far enough away that they’ll never have to see her. “Sarah” is a junior doctor and so she works a lot. She’s also incredibly intolerant of all forms of social media. Handy, that.

Sarah’s been “alive” for over a year now and, to date, her invention has had no negative consequences. When people ask when they’ll meet her, I offer loose plans about soon or maybe at such and such, then when the day comes “Her work is a bit busy” or “She has some family stuff going on.” It’s a lie that will eventually be caught out, but for now it works wonders.

It’s a long way to come to Sheffield from Edinburgh, but it’s a journey I’m always glad I’ve taken. Grandad is the one family member I get on with. And while, true, he’s been dead for five years, in many ways I still prefer his company. He was the reason I got into music.

Patrick Delaney, while never a household name, had a following of some pretty devout fans. He left behind three studio albums and one live record, as well as lending his skills to a number of other albums by better-known bands. His death, and the circumstances surrounding it, only added to his mystique. But to me, his only grandchild, he was a hero before I knew he’d toured the world. Before I knew he’d been praised by everyone from Dylan to Bowie. Thus began my journey to what is undeniably an all-encompassing obsession with music. It’s why I’m so resolute that we will make it. I am driven by an absolute certitude that our music will one day take us to places we could only dream of.

Who cares if, right now, I’m rendered unable to speak to anyone I deem remotely attractive? Because in a few years’ time, when me and the rest of our band are gracing the covers of every music magazine still in publication, then, well then I’ll have confidence. I want that so-called normal life, and ironically, my best hope for getting there is through unbridled success. And with that success, in my own way, I’ll keep my grandad’s legacy alive. When they ask me what my biggest inspiration is, I’ll say, Patrick Delaney.

I’m suddenly motivated, for the first time ever, to say this last bit out loud.

“Love you, Grandad. See you next month.”

Owen Nicholls is the author of Love, Unscripted and a screenwriter with a master’s degree in script writing. He lives in Norwich, England, with his partner and their two sons. 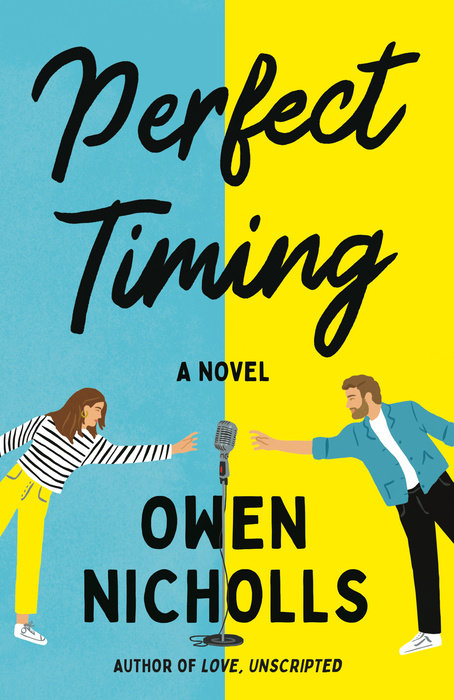