The shocking, definitive account of the lawyers and media tycoons who enabled the rise of Donald Trump, featuring new revelations from a Pulitzer Prize-winning Wall Street Journal team

In The Fixers, Joe Palazzolo and Michael Rothfeld have produced a deeply reported and exquisitely drawn portrait of that world, full of secret phone calls, hidden texts, and desperate deals, unearthing the practice of “catch and kill” by which Trump surrogates paid hush money to cover up his affairs, and detailing Trump’s historic relationship with his fixers—from his early, influential relationship with Roy Cohn to his reliance on Michael Cohen, National Enquirer publisher David Pecker, and former New York mayor Rudy Giuliani. It traces the arc of their interactions from the 1970s through the 2016 campaign and beyond. It is a distinctly American saga that navigates the worlds of reality TV, cash-for-trash tabloids, single-shingle law shops, celebrity bashes, high-end real estate, pornography, and politics. The characters and settings of this book are part of a vulgar circus that crisscrosses the country, from New York to L.A. to D.C.

Terrifying, darkly comic, and compulsively readable, The Fixers is an epic political adventure in which greed, corruption, lust, and ambition collide, and that leads, ultimately, to the White House.

Advance praise for The Fixers

“Of the dozens of books chronicling Donald Trump’s presidency, The Fixers is destined to sit atop the pile. It has everything you look for in a political page-turner: Colorful characters, intrigue, sex, corruption and—unlike much of the Trump canon—meticulous, factual reporting by two ace reporters. What a read!”—John Carreyrou, New York Times bestselling author of Bad Blood

An excerpt from The Fixers

Donald Trump kept a photo of Roy Cohn on his office desk. If a business meeting wasn’t proceeding as planned, Trump might point to the photo and say, in so many words, You don’t want to mess with me. Just look at this mug. That’s my lawyer.

This affinity for the battle had bound the two men, forging one of the defining relationships of both of their lives. It began in the early 1970s, with Trump a few years shy of his thirtieth birthday. Cohn was a celebrity lawyer and celebrated villain who’d served as the right hand of Republican senator Joseph McCarthy in his anti-Communist crusade. Cohn, who hailed from a New York Democratic family and was the son of a state judge, had left McCarthy’s employ after a series of nationally televised congressional hearings revealed the pressure tactics he used against the U.S. Army to obtain preferential treatment for his friend and fellow Communist hunter, a private named G. David Schine.

He’d returned to New York unbowed and built a private practice that pivoted on his ruthless intelligence—he had a photographic memory—and the public perception of his ethical and moral flexibility. Juries had acquitted him in three criminal trials, clearing him of charges including jury tampering, bribery, blackmail, and making false statements. These triumphs over the government he had once served only enhanced Cohn’s reputation as a rogue who did whatever it took to win. So in 1973, when Trump spotted him at Le Club, an East Fifty-fifth Street restaurant frequented by New York’s glitterati, he wandered over to Cohn’s table for advice about a legal problem of his own.

Trump was the little-known son of a politically connected developer from a German immigrant family. Eager to build something grander than Fred Trump’s monotonous red-brick, rent-regulated projects, the young developer had moved to Manhattan to explore his own ambitions in society, government, and business. He wanted to trade Forest Hills for Fifth Avenue.

At Cohn’s table that day, Trump explained that his father’s real estate company was under attack from the United States Department of Justice, which was accusing it of discriminating against minorities in its rental buildings. Trump told Cohn that he and his father had spent the afternoon talking to lawyers at a prestigious Wall Street firm. They had advised the Trumps to settle.

“What do you think we should do?” Trump asked.

“My view is tell them to go to hell and fight the thing in court and let them prove that you discriminated, which seems to me very difficult to do, in view of the fact that you have black tenants in the building,” Cohn said. “I don’t think you have any obligation to rent to tenants who would be undesirable, white or black, and the government doesn’t have a right to run your business.”

Trump hired Cohn to take on the Justice Department, launching a professional relationship that would evolve into a much more personal one. For years to come, they would socialize at parties and in clubs. Trump sought advice from Cohn on politics, business, and marriage. Cohn, whose homosexuality and promiscuity were an open secret, often surrounded himself with men like Trump—heterosexual, younger, fair-haired, and good-looking. With his charm, self-confidence, and ambition, Trump was a trophy client, the biggest he’d ever had.

In the years Cohn represented Trump, from the early 1970s until the mid-1980s, he also tended to a colorful roster of clients who included mobsters like Carmine Galante, the brutal head of the Bonanno crime family, and “Fat Tony” Salerno, a boss of the Genovese family; wealthy women divorcing their husbands; New York Yankees owner George Steinbrenner; artist Andy Warhol; Cardinals Francis Spellman and Terence Cooke; and disgruntled stockholders who used Cohn’s name and the fear it inspired to extract settlements from companies.

The attorneys who worked for him, and many who opposed him, considered Cohn a brilliant lawyer whose potential was almost limitless, if only he put in a bit more effort. And played fair. He often relegated case preparation to his limo rides to the courthouse, submitting the young associate attorneys riding with him to lightning-round interviews. “Who’s the judge?” was usually his first question. Next was “What are the parties’ names?” He was famously late for hearings and conferences, in effect letting the meter run while his opponents racked up ever larger bills from their lawyers.

The Roy Cohn playbook demanded a relentless show of strength. The tactics he deployed in a fight appealed to Trump, who had internalized some of them before he met Cohn: Attack—mercilessly. Never admit you’re wrong. Declare complete victory, even when making concessions. Follow through only when pressed, and only as much as required.

Cohn’s performance as defense lawyer for the Trumps in their battle with the federal government over alleged housing discrimination reflected his fight-over-flight essence perfectly. The 1973 lawsuit by the U.S Department of Justice’s Civil Rights Division accused the Trumps’ management company of violating the Fair Housing Act, a landmark 1968 civil rights law signed by President Lyndon B. Johnson a week after the assassination of Martin Luther King Jr.

The government’s four-page lawsuit offered only the broad outlines of its case. The suit said the Trumps had violated the law by refusing to rent to blacks, which they did by telling them apartments weren’t available when in fact they were, and by using a more onerous set of terms and conditions when the company did deign to rent to people of color.

Cohn’s answer was to attack.

“This case represents an abuse of process,” Cohn wrote in a December 11, 1973, affidavit to the court, calling the discrimination allegations “totally unfounded.”

“The Civil Rights Division did not file a lawsuit. It slapped together a piece of paper for use as a press release, and only secondarily as a court document,” he said.

The Justice Department’s evidence included the account of a doorman at a Trump building in Brooklyn who told FBI agents that the superintendent had directed him to tell prospective black tenants that the rent was twice as high as it actually was. A Trump rental supervisor reported that Fred Trump had personally instructed the employee not to rent to blacks or people on welfare.

For his part, Donald Trump told the judge he was “shocked” by the allegations of racial bias. He’d learned of the case one morning while listening to the radio in his car. The government hadn’t warned him it was coming, Trump complained. Television news picked it up, and the next day The New York Times carried a front-page story.

“To find our name blackened in the press before we had received formal notification and had an opportunity to have a trial or even answer is unfair and unjust,” Trump said, calling the allegations “outrageous lies.” Cohn asked the judge to dismiss the case and countersued the government, alleging, with moxie but little else, that the Civil Rights Division and the U.S. attorney’s office in Brooklyn had made “untrue and unfair” statements to newspapers in a news release announcing the case. No matter that the U.S. government was immune from defamation claims. Cohn asked for damages in the amount of $100 million, a number Judge Edward R. Neaher called a “tidy sum” before dismissing the countersuit.

The parties reached a settlement in principle by the end of January 1975, but Cohn dragged out the negotiations for five months, once skipping town for Bermuda instead of meeting with a government attorney who waited at his office to finalize the deal. Under the proposed agreement, the Trumps would admit no wrongdoing but would agree to rent to people of color. Trump Management’s officers would have to familiarize themselves with state, federal, and local civil rights laws, adopt a compliance program, and take steps to train Trump employees on fair-housing requirements. It was the outcome the government had sought from the beginning.

Cohn didn’t want the government to issue a news release announcing the settlement. He suggested a joint statement by the Trumps and the Justice Department, an idea rejected out of hand by the government. Cohn, on this occasion, gave in.

Trump hated lawyers who dithered and then mailed him huge legal bills. He looked down on those who preferred to settle without a fight. He liked and respected lawyers who could do battle. That was Cohn to a T.

Joe Palazzolo and Michael Rothfeld led a team at The Wall Street Journal that won the 2019 Pulitzer Prize for National Reporting for a series of stories that revealed the hush-money payments to Stormy Daniels and Karen McDougal, and President Trump’s direct participation in both.

Palazzolo has been a reporter for the Journal since 2010. He has covered federal law enforcement, criminal justice issues, corporate corruption, and state and federal courts. He lives in Brooklyn with his wife, Tara Kelly.

Joe Palazzolo and Michael Rothfeld led a team at The Wall Street Journal that won the 2019 Pulitzer Prize for National Reporting for a series of stories that revealed the hush-money payments to Stormy Daniels and Karen McDougal, and President Trump’s direct participation in both.

Rothfeld is an investigative reporter on the Metro desk of The New York Times. He previously reported for the Journal, the Los Angeles Times, Newsday, and The Philadelphia Inquirer. He lives in Brooklyn with his daughters, Annabel and Georgia. 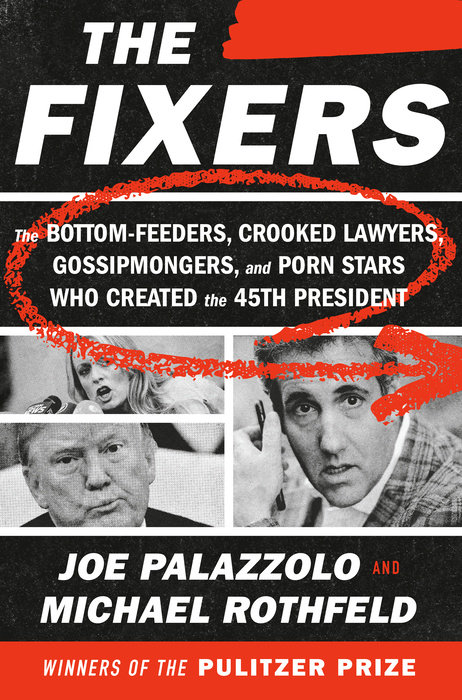