In the spellbinding new mystery by the master of “the clever twist,” a group of ex-RAF comrades journey to a Scottish castle for a reunion. But by the time they reach their destination, two of them are dead.

Harry Barnett is leading a contented life in Vancouver with his wife and daughter when he is brought back to England by the death of his mother. He intends to spend just a few days sorting out her affairs when a chance meeting he will regret for the rest of his life makes him change his plans. Two old acquaintances from his National Service days track Harry down to his mother’s house — the last address they had for him. A lavish reunion has been organized to mark the fiftieth anniversary of their RAF days. Harry decides to go.

During the war, Harry and his fellow RAF conscripts spent three months in a Scottish castle where they acted as guinea pigs in a psychological experiment. The reunion is to take place in the same castle. It will be a chance to see friends, settle old scores and lay a few ghosts to rest.

The party begins on the train up to Aberdeen, until the apparent suicide of one of their number shatters the holiday atmosphere. Their arrival in Scotland seems under a cloud, and when another comrade dies soon after their arrival, Harry is gripped by a sense of foreboding. As well, the recollections of the old comrades of their time in the castle are frighteningly different, and unexplained events from 1955 still haunt them. As Harry tries to solve the mystery of what really happened fifty years ago, he uncovers an extraordinary secret that convinces him he will never leave the castle alive.

An excerpt from Never Go Back


If he had flown back with Donna, of course, it would have been all right. If her flight had been delayed by a couple of hours, it would have been enough. If he had simply turned right instead of left coming out of the cemetery, he would probably have got away with it.

But it was not all right; it was not enough: he did not get away with it. In the end, the ifs and therefores amounted to nothing. Fate had set a trap for him that day. And he walked obligingly and unwittingly straight into it.

Thus did a decade of good fortune for Harry Barnett come to an end without him even realizing it. Marriage and fatherhood had proved during those years to be the sweetest of surprises. He regretted coming to them so late, but the circumstances that had brought Donna and hence their daughter Daisy into his life made the delay inevitable. He had never been one to dwell on missed opportunities. The present -- and their future as a family -- were his to enjoy.

The recent death of his mother had failed to puncture his contentment. A swift and gentle exit at the age of ninety-three was no cause for anguish. Her race had been run to a dignified finish.

Harry's links with his birthplace had effectively died with her. He had returned to Swindon to arrange her funeral and to clear out the house she had lived in for more than seventy years. The Council would want to put another tenant in as soon as possible. The fact that 37 Falmouth Street held so much of Harry's past could not stand in their way. Nor would he have wanted it to. It was time to move on.

That morning, Donna had flown back to Seattle, where Daisy had been staying with her grandparents. Mother and daughter would drive home to Vancouver tomorrow. Harry planned to join them in a week or so, when he had disposed of his mother's clothes, crockery and furniture. It was not a task he was looking forward to. But it had to be done. And there was no-one to do it but him. Such was the lot of an only child.

Seeing off Donna at Heathrow and travelling back alone to Swindon had left Harry feeling sorry for himself, however. He was in no mood to begin emptying cupboards and filling bin-bags. He walked away from the station past the boundary wall of the former Great Western Railway works, then crossed the park and made his way up to Radnor Street, where his old primary school, now converted into offices, stood opposite the entrance to the cemetery.

For the first time in Harry's memory, the gravestone commemorating his father, Stanley Barnett, killed in an accident in the GWR locomotive-erecting shop when Harry was three, no longer stood in its familiar place near the highest point of the cemetery. It had been removed to have the name Ivy Barnett added at long last to the inscription. Harry stood for a few minutes by the flower-strewn mound of earth that marked the spot where his mother's coffin had been lowered in on top of his father's two days ago. He breathed the clear spring air and gazed towards the flat horizon. Then he turned and slowly walked away.

Leaving the cemetery on the far side, he seriously considered making for the Beehive, his local in those distant days when he had been a Swindon householder in his own right and co-proprietor of Barnchase Motors. But he reckoned a descent into beery nostalgia would not be a good start to a week of solitude and toil, so he headed downhill instead to the market hall, where he bought a couple of lamb chops for his supper before returning to Falmouth Street.

It was a mild April afternoon of watery sunshine and warbling birdsong. Even the office blocks of downtown Swindon contrived to appear, if not attractive, then at least inoffensive in the restful light. The Railway Village was quiet and tranquil, a condition the average age of its residents generally guaranteed. Turning his back nobly on the beckoningly bright yellow frontage of the Glue Pot -- or at any rate deciding he should put the lamb chops in the fridge before allowing himself a swift one -- Harry crossed Emlyn Square and started along Falmouth Street.

He saw the two men ahead of him before he realized it was his mother's door they were standing at. They were about his own age, which he would once have described as old, but, now he had attained it, seemed merely a bemusingly high number. One was short and tubby, anoraked, tracksuited and baseballcapped. The other, though scarcely much taller, was thinner, his clothes shabby and old-fashioned -- beltless raincoat, crumpled trousers, laced shoes in need of a polish. He had a full head of white, tousled hair, a beak-nosed, bony face and a put-upon stoop. His companion looked contrastingly at ease with himself, staring at the unanswered door of number 37 with his hands thrust idly into his anorak pockets, sunlight flashing on his glasses in time to the gum-chewing motion of his well-padded jaw. They were debating something in a desultory fashion, or so a shrug of his shoulders suggested. A battered leather suitcase and a smarter, newer holdall stood beside them on the path. Harry did not recognize them, nor could he guess what they wanted. Whatever it was, though, he felt certain they had not come to see him.

Then the thinner of the two spotted him and touched the other's arm. A word passed between them. They turned and looked at Harry. As they did so, he stopped. And everything else stopped too, even the chewing of the gum.

'Ossie?' the fat one said after a moment of silence and immobility. 'That's you, isn't it?'

No-one had called Harry Ossie since his National Service days, which had ended fifty years ago and been largely forgotten by him for almost as long. While his brain sent a none too nimble search party off in quest of memories that might explain this turn of events, he opened his mouth to speak -- but found nothing to say.

Robert Goddard's first novel, Past Caring, was an instant bestseller. His first Harry Barnett novel, Into the Blue, was winner of the first WHSmith Thumping Good Read Award.  He lives in Truro, Cornwall.  Delta will publish the next Goddard novel, Found Wanting, in 2011. 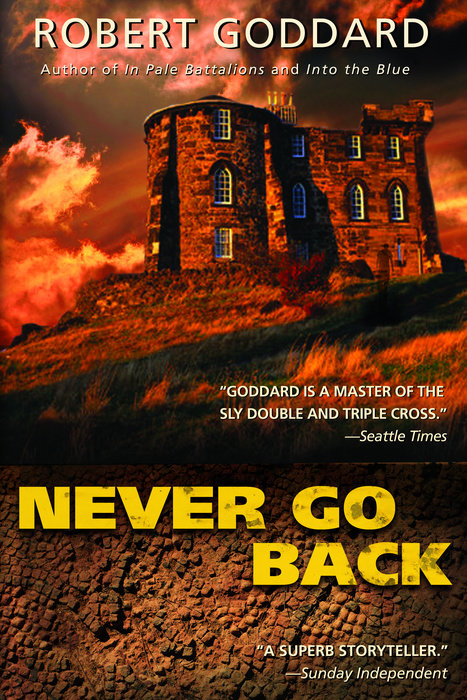