“Powerful and provocative . . . a novel about female strength, spirit, resilience—and the solace that friendship can sometimes provide.”—The Washington Post

Kyuri is an achingly beautiful woman with a hard-won job at a Seoul “room salon,” an exclusive underground bar where she entertains businessmen while they drink. Though she prides herself on her cold, clear-eyed approach to life, an impulsive mistake threatens her livelihood.

Kyuri’s roommate, Miho, is a talented artist who grew up in an orphanage but won a scholarship to study art in New York. Returning to Korea after college, she finds herself in a precarious relationship with the heir to one of the country’s biggest conglomerates.

Down the hall in their building lives Ara, a hairstylist whose two preoccupations sustain her: an obsession with a boy-band pop star, and a best friend who is saving up for the extreme plastic surgery that she hopes will change her life.

And Wonna, one floor below, is a newlywed trying to have a baby that she and her husband have no idea how they can afford to raise in Korea’s brutal economy.

Together, their stories tell a gripping tale at once unfamiliar and unmistakably universal, in which their tentative friendships may turn out to be the thing that ultimately saves them.

An excerpt from If I Had Your Face

Sujin is hell-­bent on becoming a room salon girl. She has invited Kyuri from across the hall to our tiny apartment, and the three of us are sitting on the floor in a little triangle, looking out the window over our bar-­dotted street. Drunk men in suits stumble by, contemplating where to go for their next round of drinks. It is late and we are drinking soju in little paper cups.

Kyuri works at Ajax, the most expensive room salon in Non­hyeon. Men bring their clients there to discuss business in long dark rooms with marble tables. Sujin has told me how much these men pay a night to have girls like Kyuri sit next to them and pour them liquor, and it’s taken me a long time to believe her.

I’d never heard of room salons before I met Kyuri, but now that I know what to look for, I see one on every side street. From the outside, they are nearly invisible. Nondescript signs hang above darkened stairways, leading to underground worlds where men pay to act like bloated kings.

Sujin wants to be a part of it all, for the money. Right now she is asking Kyuri where she got her eyes done.

“I got mine done back in Cheongju,” says Sujin sorrowfully to Kyuri. “What a mistake. I mean, just look at me.” She opens her eyes extra wide. And it’s true, the fold on her right eyelid has been stitched just a little too high, giving her a sly, slanted look. Unfortunately, the truth is that even apart from her asymmetrical eyelids, Sujin’s face is too square for her to ever be considered pretty in the true Korean sense. Her lower jaw also protrudes too much.

Kyuri, on the other hand, is one of those electrically beautiful girls. The stitches on her double eyelids look naturally faint, while her nose is raised, her cheekbones tapered, and her entire jaw realigned and shaved into a slim v-­line. Long feathery eyelashes have been planted along her tattooed eye line, and she does routine light therapy on her skin, which glistens cloudy white, like skim milk. Earlier, she was waxing on about the benefits of lotus leaf masks and ceramide supplements for budding neck lines. The only unaltered part of her is surprisingly her hair, which unfolds like a dark river down her back.

“I was so stupid. I should have waited till I was older.” With another envious look at Kyuri’s perfect creases, Sujin sighs and peers at her eyes again in a little hand mirror. “What a waste of money,” she says.

Sujin and I have been sharing an apartment for three years now. We went to middle school and high school together in Cheongju. Our high school was vocational so it was only two years long, but Sujin didn’t even finish that. She was always itching to get to Seoul, to escape the orphanage that she grew up in, and after our first year she went to try her luck at a hair academy. She was clumsy with scissors though, and ruining wigs was expensive, so she dropped out of that too, but not before she called me to come take her spot.

I am now a full-­fledged stylist and a few times a week Sujin comes into the salon where I work, at 10 a.m. sharp. I wash and blow-­dry her hair before she goes to work at her nail salon. A few weeks ago, she brought Kyuri in as a new client for me. It is a big deal for smaller hair shops to snag a room salon girl as a client because room salon girls get their hair and makeup done professionally every day and bring in a lot of money.

The only thing that annoys me about Kyuri is that sometimes she speaks too loudly when she is talking to me, although Sujin has told her that there is nothing wrong with my hearing. Also, I often hear her whispering about my “condition” at the shop, when my back is turned.

I think she means well though.

Sujin is still complaining about her eyelids. She has been unhappy about them almost the entire time I have known her—­before and after she had them stitched. The doctor who performed the surgery was the husband of one of our teachers, who ran a small plastic surgery practice in Cheongju. About half of our school got their eyes done there that year because the teacher offered us a 50 percent discount. The other half, which included me, couldn’t afford even that.

“I’m so glad I don’t need any restitching done,” says Kyuri. “The hospital I go to is the best. It is the oldest hospital on the Beauty Belt in Apgujeong and singers and actresses like Yoon Minji are regulars.”

“Yoon Minji! I love her! She’s so pretty. And super nice in person, apparently.” Sujin stares at Kyuri, rapt.

“Eh,” says Kyuri, annoyance flitting across her face. “She’s all right. I think she was just getting some simple lasering done, because of all the freckles she is getting on her new show. The one that films out in the country with all that sun?”

“Oh yeah, we love that show!” Sujin pokes me. “Especially Ara. She’s obsessed with the kid from that boy band Crown, the one who’s the youngest in the cast. You should see her mooning around the apartment after the show ends every week.”

I pretend to slap her, and shake my head.

“Taein? I think he’s so cute too!” Kyuri is talking loudly again, and Sujin gives her a pained look before glancing back at me.

“His manager comes to Ajax sometimes with men who wear the tightest suits I’ve ever seen. They’re investors probably, because the manager is always bragging to them about how popular Taein is in China.”

“That’s crazy! You have to text us next time. Ara will drop everything and go running straight over to you.” Sujin grins.

I frown and take out my notepad and my pen, which I prefer over typing into my phone. Writing down words by hand feels more akin to speaking.

Taein is too young to go somewhere like Ajax, I write.

Kyuri leans over to see what I’ve written. “Chung Taein? He’s our age. Twenty-­two,” she says.

That’s what I mean, I write. And Kyuri and Sujin both laugh at me.

Sujin’s pet name for me is ineogongju, or little mermaid. She says it’s because the little mermaid lost her voice but got it back later and lived happily ever after. I don’t tell her that that’s the American cartoon version. In the original story, she kills herself.

Sujin and I first met when we were assigned to work a sweet potato cart together our first year of middle school. That was how a lot of teenagers made money back in Cheongju in the winters—­we stood on street corners in the snow and roasted sweet potatoes over coals in little tin barrels and sold them for a few thousand won each. Of course, it was only the bad kids who did this, kids who were part of the iljin—­the gangs of every school—­and not the nerds, who were busy studying for entrance exams and eating cute little boxed lunches that their mothers packed for them every morning. But then again, the ones at the sweet potato carts were the good bad kids. At least we were giving people something for their money. The truly bad ones just took it from them.

As perilous battles were fought over the best corners, I was lucky to have been paired up with Sujin, who could be ruthless when necessary.

The first thing Sujin taught me was how to use my fingernails. “You can blind someone, or punch a hole in their throat, if you want. But you have to keep your nails the optimal length and thickness, so that they don’t break at a critical moment.” She examined mine and shook her head. “Yeah, these won’t do,” she said, prescribing nail-­strengthening vitamins and a particular brand of thickening polish.

That was back when I still spoke, and Sujin and I would joke around or sing as we manned our cart, and call out to passersby at the top of our lungs. “Sweet potatoes are good for your skin!” we’d yell. “Gives you health and beauty! And they’re so delicious!”

A few times a month, Nana, the senior girl who gave us her coveted corner, would stop by to pick up her dues. She was a famous iljin member, and had conquered the entire local district in a series of legendary fights. She’d broken her pinkie finger in the last one however, and handed her territory off to us while she recovered.

Although she would slap around the other girls in the bathrooms at school, Nana liked me because I was the only girl in our school gang who didn’t have a boyfriend. “You know what’s important in life,” she always said to me. “And you look innocent, which is great.” I would say thank you and bow deeply, and then she would send me off to buy cigarettes. The man at the corner store wouldn’t sell them to her because he didn’t like her face.

I think I know why Sujin is so obsessed with her looks. She grew up in the Loring Center, which everyone in Cheongju thought of as a circus. In addition to housing an orphanage, it was a home for the disabled and deformed. Sujin told me that her parents died when she was a baby, but recently it occurred to me that she must have been abandoned by a girl even younger than us. Perhaps Sujin’s mother was a room salon girl too.

Frances Cha is a former travel and culture editor for CNN in Seoul. She grew up in the United States, Hong Kong, and South Korea. A graduate of Dartmouth College and the Columbia University MFA writing program, she has written for The Atlantic, The Believer, and the Yonhap News Agency, among others, and has lectured at Columbia University, Ewha Womans University, Seoul National University, and Yonsei University. She lives in Brooklyn. 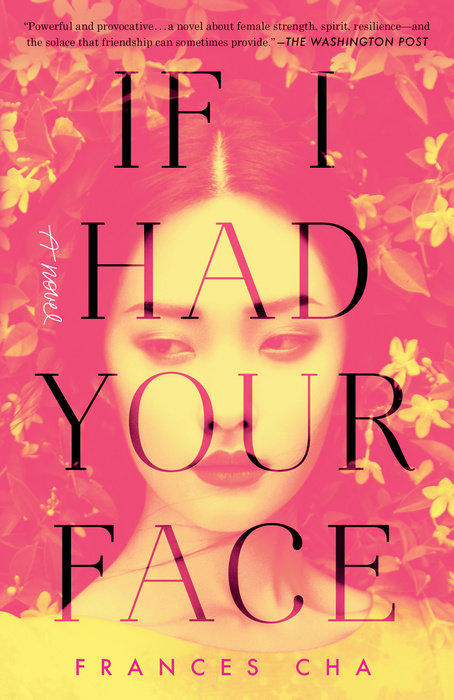