On her first mission for MI6, the daring young photographer at the heart of this thrilling new mystery series by bestselling author Anne Perry travels to Mussolini’s Italy to rescue the lover who betrayed her.

Britain’s secret intelligence service, MI6, has lost contact with its informant in northern Italy, just as important information about the future plans of Austria and Nazi Germany is coming to light. And young Elena Standish, to her surprise, is the only person who can recognize MI6’s man—because he is her former lover. Aiden Strother betrayed Elana six years ago, throwing shame on her entire family. Now, with so much to prove, Elena heads to Trieste to track down Aiden and find out what happened to his handler, who has mysteriously cut off contact with Britain.

As Elena gets word of a secret group working to put Austria in the hands of Germany, her older sister, Margot, is in Berlin to watch a childhood friend get married—to a member of the Gestapo. Margot and Elena’s grandfather, the former head of MI6, is none too happy about the sisters’ travels at this tumultuous time, especially when a violent event at home reminds him that even Britain is growing dangerous. As his own investigation collides with his granddaughter's, what’s at stake on the continent becomes increasingly frightening—and personal.

Against the backdrop of a rapidly changing Europe, New York Times bestselling author Anne Perry crafts a novel full of suspense, political intrigue, and the struggle between love and loyalty to country.

An excerpt from A Question of Betrayal

“What did you say?” Elena asked incredulously. She could not believe what she had just heard. She was standing in the small sitting room of her London apartment, the September sun pouring in through the window and illuminating the ornaments she had collected in the few years she had been here: an ivory carved box, a gift from her mother; candlesticks from her grandparents; family photographs. But the light was the best thing about the place, the smooth lines and the shadows, a photographer’s delight.

Peter Howard stood opposite her, a couple of yards away, his face calm, as if he had no grasp of the outrageousness of what he had asked her. He looked very ordinary in the clear morning air: a little taller than average, fairish hair, regular features. Forgettable. Only his eyes and mouth were remarkable. They showed both a touch of humor and an awareness of pain—­and of what it meant.

“I have an important job for you at last,” he repeated. “Something that really matters.”

He said “at last” because it had been four months since Elena’s extraordinary adventure in Berlin, her baptism by fire. It had been her introduction to the truth about her own family and their connection with British Military Intelligence, kept secret from the public. Her tasks since then had been very occasional, and of no particular importance. Case markers, as it were, for a beginner, after the horror and the losses in Berlin. She felt she was capable of far more. Had she not proven that?

But what Peter was asking now was not a matter of skill or courage.

“Are you saying you won’t do it?” His face hardly changed, yet he managed to convey disappointment, even contempt.

“You don’t know what you are asking—­” she began.

“Yes, I do,” he interrupted her, his voice still perfectly level. “One of our most important agents is embedded in Trieste, seeking vital information, and his cover has almost certainly been blown. We can’t reach his handler, and we want you to go and find him. Tell him that he must leave immediately, with as much information as he has. Otherwise, he may be killed. We cannot lose him and all that he has learned over the last year. He has a list of names, and it’s vital we know who is on it.”

“He was a traitor!” Even saying the words almost choked her. It brought back memories, disillusion, and then humiliation.

“No,” Peter said calmly, although there was a shadow in his eyes that suggested, for an instant, that he was aware of at least elements of the truth. Wasn’t everybody? Elena’s dismissal from the Foreign Office had been pretty public.

“He was . . .” She did not need to raise her voice. She wanted to sound in control, as if she no longer cared. She was twenty-­eight; this had been six years ago.

“He betrayed you,” Peter said quietly, and there was emotion in his voice now, some kind of sadness. “He did not betray Britain,” he continued. “He went into Germany as a Nazi sympathizer to gain their trust. We gave him information the Germans would believe—­his rite of passage, if you like—­but, of course, we knew what they knew and could work around it. It was successful. He earned their trust. He became one of them.”

Elena tried to process what he was saying. So, had Aiden Strother been loyal to Britain all the time? Could that be true? Even as she turned it over in her mind, she could see how it made sense. She had learned a bit in the few months since Berlin. Somewhere inside her, she had aged years and grasped a new reality. She had lived through the war, the privation, the constant fear, the grief of loss: most immediately of her brother, Mike, and her sister Margot’s husband, Paul. Every family she knew had lost somebody, and a million men were left shells of who they had once been. There had been radical social changes; rank and privilege had melted away; all blood is scarlet in the trenches.

But there had been other changes as well. Women worked at jobs they would have had neither the wish nor the opportunity to do before the men went away. Social class distinctions were blurred, some even obliterated. Women wore short dresses now, not much below the knee. Many had short hair. The elegance, the sentimentality, the blind hope of the Edwardian era were gone. It was 1933, a new, brash, desperate age now, familiar with the Depression, jazz, moving pictures, and the brilliant music and haunting lyrics of songwriters such as Cole Porter.

No one wanted another war. Never again must such grief, such abomination of loss, be allowed. Whatever the cost.

Elena tried to say yes, she would do it. Peter was waiting.

She looked away. Aiden may not have betrayed Britain, but he had betrayed her. Used her, and then gone without a word. It still hurt.

Peter stood there in the sun . . . and silence.

She drew breath to say, “Isn’t there someone else?” She met his eyes. Damn him! He was doing everything the right way: asking her, and then leaving her to realize how selfish it was to think of her own dismissal and ruined career, instead of the job at hand. No one wanted to go to war, but they went anyway. She thought of Mike, and how he had said goodbye that last time, almost as if he had known he would not come back. “Chin up, kiddo, we’re almost there,” he had said.

She refused to think of that any further. She glared at Peter Howard, her eyes filling with tears. What the hell did Aiden’s betrayal of her matter, then . . . or now?

“Yes, of course I’ll go,” she said, then realized all it would involve and instantly regretted it. But it was too late to withdraw.

“Good,” he said gently. “You are by far the best person because you know him by sight, and he knows you well enough to trust you.”

She raised her eyebrows. “After what he did to me, do you think he would place his life in my hands? I should be the last person he’d trust, if he had any sense.”

“Or, on the other hand,” Peter replied, with a slight twist of humor in his eyes, “he might think you put the country and the Service before your own hurt feelings, to save the life of a man who has already given so much.”

That took her breath away. For a moment she could think of no answer. Could Aiden really have sacrificed this much? Had he really loved her, but put service to the country, his duty, first? He was fifteen years older than she, old enough to have served in the war. He knew more of it, in reality, than she ever would. She breathed in and out slowly. Surely Aiden could have given her some indication: a word, a gesture? “Why didn’t he . . . ?” she started.

“Why couldn’t he have told you?” There was an edge to Peter’s voice, patience and something else: disappointment. “And you would have felt better?” he asked. “You would not have been so wounded, so grieved?”

“Yes! It would have been just ordinary decency!” Now she was furious, with a lump in her throat that betrayed the tears so close to breaking through. “Just . . .” She stopped.

“Just have lessened the pain for you. Even allowed you to have kept your job, perhaps.”

She glared at him. “Yes! Was I really expendable?”

She did not answer. Expendable. What a terrible thing to admit of anyone. It hurt. It meant you could be done without.

“Elena.” Peter spoke gently now. “If you had not been hurt, what would other people have thought? Honestly.”

He raised his eyebrows very slightly. “Do you think there are no German agents watching us? Listening to us? Or even our own people, good but naïve, repeating office gossip?”

She blinked at the sudden humiliation. As if she were a moth pinned to a board and watched.

“Do you think no one sees you?” he asked. “Talks about you? You are a lovely woman; in your own way, beautiful. But more than that, you have considerable intelligence, in spite of your occasional lapses of judgment, and you are Charles Standish’s daughter and Lucas Standish’s granddaughter. Of course people talk. And of course you have enemies. Think, Elena. If Aiden Strother had used you and damaged you, gone over to the enemy with no grief on your part, no sense of betrayal . . . if you were a German, what would you have thought? How much of what Strother said to you would you have believed? And don’t pretend to be naïve. It’s too late for that.”

“Suicide.” He said the word for her. “As well as a betrayal of all the connections he used to get information back to us.” 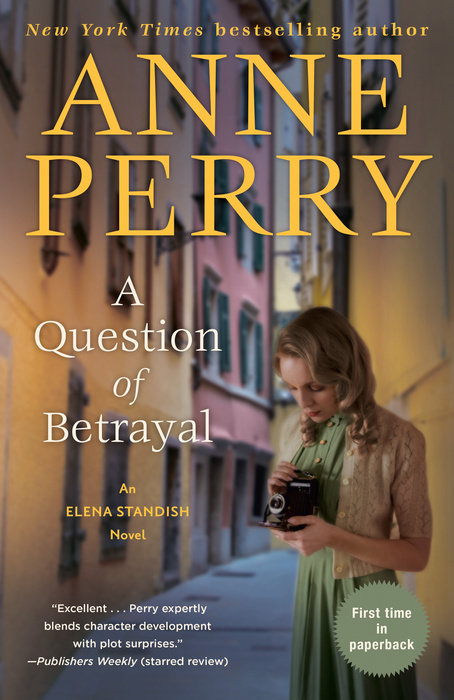