“I read The Two Lives of Lydia Bird in a single sitting. What a beautiful, emotional gift Josie Silver has given us.”—Jodi Picoult

Written with Josie Silver’s trademark warmth and wit, The Two Lives of Lydia Bird is a powerful and thrilling love story about the what-ifs that arise at life’s crossroads, and what happens when one woman is given a miraculous chance to answer them.

Lydia and Freddie. Freddie and Lydia. They’d been together for more than a decade and Lydia thought their love was indestructible. But she was wrong. On Lydia’s twenty-eighth birthday, Freddie died in a car accident.

So now it’s just Lydia, and all she wants is to hide indoors and sob until her eyes fall out. But Lydia knows that Freddie would want her to try to live fully, happily, even without him. So, enlisting the help of his best friend, Jonah, and her sister, Elle, she takes her first tentative steps into the world, open to life—and perhaps even love—again.

But then something inexplicable happens that gives her another chance at her old life with Freddie. A life where none of the tragic events of the past few months have happened.

Lydia is pulled again and again through the doorway to her past, living two lives, impossibly, at once. But there’s an emotional toll to returning to a world where Freddie, alive, still owns her heart. Because there’s someone in her new life, her real life, who wants her to stay.

An excerpt from The Two Lives of Lydia Bird

Freddie Hunter, otherwise known as the great big love of my life, died fifty-­six days ago.

One moment I’m cursing him for running late and ruining my birthday dinner, the next I’m trying to make sense of the two uniformed policewomen in my living room, one of them holding my hand as she speaks. I stare at her wedding ring, and then at my engagement ring.

“Freddie can’t be dead,” I say. “We’re getting married next year.”

It’s probably a self-­preservation thing that I struggle to recall exactly what happened afterward. I remember being rushed to emergency in the police car, and my sister holding me up when my legs buckled at the hospital. I remember turning my back on Jonah Jones when he appeared in the waiting room with barely a scratch on him, just his hand bandaged and a wound dressing over one eye. How is that fair? Two get into the car, only one gets out again. I remember what I was wearing: a new green blouse I’d bought especially for the dinner. I’ve given it away to a charity shop, I never want it on my body again.

Since that awful day I’ve racked my brain countless times to try to recall every word of my last conversation with Freddie, and all I can remember is grumbling at him about cutting it close for the restaurant. And then come the other thoughts. Was he rushing to please me? Was the accident my fault? God, I wish I’d told him that I love him. Had I known that it was the last time I’d ever speak to him, I would have; of course I would. Since it happened I’ve sometimes wished he’d lived just long enough for us to have one more conversation—­but then I’m not sure my heart could have withstood it. It’s probably for the best if the last time you do something momentous passes you by unheralded: the last time my mother collected me at the school gate, her hand reassuring around my smaller one, the last time my father remembered my birthday. The last time I spoke to Freddie Hunter as he dashed back to see me on my twenty-­eighth birthday. Do you know what the last words he said to me were? Over and out. It was a habit, something he’d done for years; silly words that have now become one of the most significant phrases of my life.

I guess it was just so Freddie, though, to go out on a phrase like that. He had this great big lust for life, a lightness of attitude coupled with a killer competitive streak—­fun but lethal, if you like. I’ve never met anyone with such a gift for always knowing what to say. He has, he had, a knack of making other people think they’d won when in fact he’d got exactly what he wanted. He is, he was, the one who was always going to be someone or do something that would make people remember his name long after he’d gone.

And now he bloody well has gone, his car concertinaed against an oak tree, and I feel as if someone has tied a knot in my windpipe. It’s as if I can’t get quite enough air into my lungs. I’m breathless and perpetually on the edge of panic.

The doctor has finally given me something to help me sleep after my mum yelled at him yesterday in the living room: a month’s supply of some new pill that he wasn’t at all sure about prescribing because he thinks grief is something I need to “pass through sentiently in order to emerge.” I’m not making this shit up; he said those actual words to me a couple of weeks ago, before leaving me empty-­handed to go home to his very-­much-­alive wife and children.

Living around the corner from my mother is a blessing and a curse in varying measures. When she makes her champion chicken stew and brings a pot round for us, still hot off the stove, for instance, or when she’s nipped round on her way to work to spray de-­icer on my windscreen on a cold November morning—­those times our proximity is a blessing. Other times, like when I’m seeing double with a hangover and she appears frowning as if I’m still seventeen, or when I haven’t tidied up for a couple of days and she looks down her nose as if I’m one of those extreme hoarders in need of a reality TV intervention—­those times our proximity is a curse. Ditto when I’m trying to grieve in private with the living room curtains still closed at three in the afternoon and the same pj’s on as when she visited me the day before and the day before that, making me tea I’ll forget to drink and sandwiches I’ll bury in the back of the fridge when she’s upstairs cleaning the bathroom or outside pulling the bins down.

I understand, of course. She’s fiercely protective of me, especially at the moment; she had the doctor practically shaking with fear when he wavered over the idea of prescribing sleeping tablets. I’m not all that sure about popping pills either, as it happens, although God knows the idea of oblivion is appealing. I don’t know why I’m bringing God into this; Freddie is, was, and would have always been a strident atheist, and I’m ambivalent at best, so I don’t expect God has had much to do with my being placed on a clinical trial for the recently bereaved. The doctor recommended joining the drug trial, probably because my mother was demanding maximum strength Valium and these new pills are being touted as a milder, more holistic option. To be perfectly honest, I don’t really care what they are; I’m officially the world’s saddest, most tired guinea pig.

Freddie and I have this fabulous bed, you see. It sounds crazy, but the Savoy Hotel was auctioning off its beds for hardly anything to make way for new ones, and sweet heaven, this bed is a fantasy island of epic proportions. People raised eyebrows at first; you’re buying a second­hand bed? Why on earth would you do that, my mother said, as aghast as if we were buying a camp bed discarded by the local homeless shelter. Clearly those doubters had never stayed at the Savoy. I hadn’t either, in truth, but I’d seen something on TV about their handmade beds and I knew I had to have one. It’s the most comfortable bed in a hundred-­mile radius, in which Freddie and I have demolished countless Sunday morning breakfasts, laughed and cried and made heart-­achingly sweet love.

When my mother told me a few days after the accident that she’d changed the sheets for me, she unintentionally sent me into a sudden, screeching meltdown. I watched myself as if from a distance, clawing at the door of the washing machine, sobbing as the sheets tumbled through the suds, swilling any last lingering traces of Freddie’s skin and scent down the drain.

Mum was beside herself, trying to lift me from the floor, calling out for my sister to come and help. We ended up huddled together on the stripped kitchen floorboards, watching the sheets, all of us in tears because it is just so bloody unjust that Freddie isn’t here to sleep in them anymore.

I haven’t been to bed since Freddie died. In fact, I don’t think I’ve properly been to sleep since. I just nap sometimes: my head on the table beside my uneaten breakfast; on the sofa huddled underneath Freddie’s winter coat, as I am now; standing up leaning against the fridge, even.

“Come on, Lyds,” my sister says now, shaking my shoulder softly. “I’ll come up with you.”

I glance at the clock, disorientated because it was broad daylight when I closed my eyes, but now it’s shadowy enough for someone, Elle, I presume, to have flicked the lamps on. It’s typical of her to be so thoughtful; I’ve always thought of her as a better version of me. We’re physically similar in height and bone structure, but she’s dark to my light; her hair, her eyes. She’s kinder than I am too; too kind for her own good a lot of the time. She’s been here most of the afternoon and Mum’s sister, Auntie June, popped in this morning; I think Mum must have drawn up a rota to make sure I’m never on my own for more than an hour or two. It’s probably pinned to the side of her fridge, right next to the shopping list she adds to all week and the food diary she fills in for her slimming class. She likes a list, my mum.

“Up where?” I say, sitting up straighter, clocking the glass of water and bottle of pills in Elle’s hand.

“Bed,” she says, an edge of steel to her voice.

“I’m fine here,” I mutter, even though our sofa isn’t actually all that comfortable to sleep on. “It’s not even bedtime. We can watch . . .” I bat my hand toward the TV in the corner, trying to remember any of the soaps. I sigh, annoyed that my tired brain can’t muster it. “You know, that one with the pub and the bald men and the shouting.”

She smiles and rolls her eyes. “You mean EastEnders.”

“That’s the one,” I say, distracted as I scan the room for the remote to turn on the TV.

“It’ll have finished by now. Besides, you haven’t watched EastEnders in at least five years,” she says, having none of it.

Elle shakes her head. “Both dead,” she says.

Poor them, I think, and their poor families.

Josie Silver is an unashamed romantic who met her husband when she stepped on his foot on his twenty-first birthday. She lives with him, their two young sons, and their cats in a little town in England called Wolverhampton. She is the #1 New York Times bestselling author of One Day in December and The Two Lives of Lydia Bird. 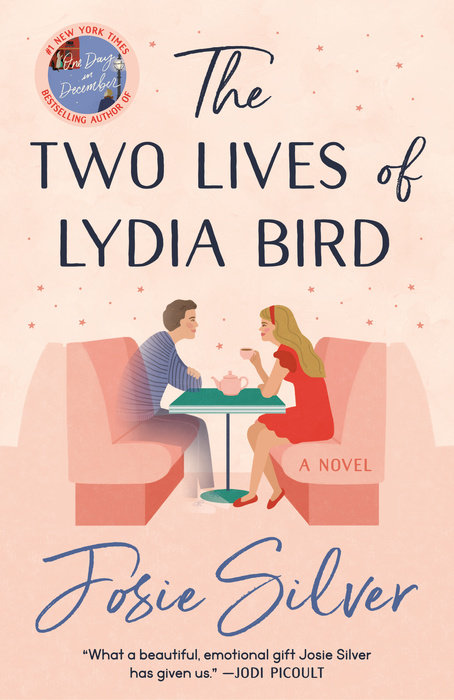