A Very Personal History of Black Women in Pop

American pop music is arguably this country’s greatest cultural contribution to the world, and its singular voice and virtuosity were created by a shining thread of Black women geniuses stretching back to the country’s founding. This is their surprising, heartbreaking, soaring story—from “one of the generation’s greatest, most insightful, most nuanced writers in pop culture” (Shea Serrano)

“Sparkling . . . the overdue singing of a Black girl’s song, with perfect pitch . . . delicious to read.”—Oprah Daily

ONE OF THE BEST BOOKS OF THE YEAR: San Francisco Chronicle, NPR, The Root, Variety, Esquire, The Guardian, Newsweek, Pitchfork, She Reads, Publishers Weekly

A weave of biography, criticism, and memoir, Shine Bright is Danyel Smith’s intimate history of Black women’s music as the foundational story of American pop. Smith has been writing this history for more than five years. But as a music fan, and then as an essayist, editor (Vibe, Billboard), and podcast host (Black Girl Songbook), she has been living this history since she was a latchkey kid listening to “Midnight Train to Georgia” on the family stereo.

Smith’s detailed narrative begins with Phillis Wheatley, an enslaved woman who sang her poems, and continues through the stories of Mahalia Jackson, Dionne Warwick, Aretha Franklin, Gladys Knight, and Mariah Carey, as well as the under-considered careers of Marilyn McCoo, Deniece Williams, and Jody Watley.

Shine Bright is an overdue paean to musical masters whose true stories and genius have been hidden in plain sight—and the book Danyel Smith was born to write.

An excerpt from Shine Bright

If you as a female—­I don’t care how many hit records you’ve had—­if you’re out there, still working, if you accept anything that [a] promoter throws at you, and you never say anything to lift yourself up, first as a female, second as an artist—­then what’s going to happen? His next clients that are females, he expects them to take it because you took it.


Until we moved to Mid-­City, Los Angeles, with my mother’s lawyer boyfriend, who was not practicing law, I was not sure that girls—­outside of my sister and me—­were teaming up in the world and making mischief.

Quel and I got up to ours with our new friends at Carthay Center, then an experimental magnet school. I was in a “gifted” program run by my teacher, Roberta Blatt. My mother and her well-connected semi-­lawyer boyfriend moved us to the Miracle Mile–­adjacent neighborhood specifically so we could attend Carthay.

I loved that school. It was about kids having freedom. My mother’s freedom came in the form of a used cream-­yellow Monte Carlo. She looked cool in it, played her music in it, and on hazy Los Angeles mornings, seemed on her way to some kind of peace.

My sister’s Carthay class had rabbits. In my classroom, beneath tendrils of Mrs. Blatt’s ivy, there was a carpet square designated for silent reading. I gulped essays printed on card stock, and answered the attached questions. With every correct answer, one moved up a color to the next comprehension level. Simple. I wanted to live on that carpet square. Because the duplex on Hi Point Street, with the bold tile in the long kitchen, was not a home.

At Carthay, where there was softball, and chorus, my sister’s teachers noticed that she wasn’t speaking. Not even to say “Here” at roll call. They called my mother in. Who knows what was said. But my sister, who talked to me about the rabbits during recess and lunch, was soon sent to counseling. I was amazed by this turn of events and had a feeling that my li’l tide was about to turn.

I don’t know when I first heard the Dixie Cups, but it was likely on the radio in my mother’s car. By the late 1970s, 1964’s “Chapel of Love” was a new oldie, and popular on “gold” and “easy listening” stations like Los Angeles’s K-­Earth 101. My mother, who hadn’t learned to drive until her midtwenties, drove to work and ferried groceries while leaning in to the jams of her youth. When she was driving we were allowed to adjust the volume, but we rarely changed the station.

By the time I got to high school, my mother was into the jazz-­esque pinings of Angela Bofill, Marlena Shaw, and Michael Franks. But when I was a tween in the Monte Carlo, there was a lot of Motown and Elvis, and groups like the Shirelles, who, with 1960’s “Will You Love Me Tomorrow,” became the first girl group—­of any race—­to hit number one on the pop charts. I liked the song, but it was an inch too whiny.

The Marvelettes hit number one with “Please Mr. Postman” in December of 1961. A deeply danceable blues co-­written by original member Georgia Dobbins, “Postman” is Motown’s first number-­one hit. At the 1:42 mark, when Gladys Horton doubles down on You better wait a minute / wait a minute / Oh, you better wait a minute, it’s a demand of her man, not a request of the postman. I used to scream those lines with her, and I see Dobbins in the shine of Chrissie Hynde’s vocals on The Pretenders’ 1979 “Brass in Pocket.”

I tolerated the Chiffons’ 1963 number-­one hit, “He’s So Fine,” as I did the Supremes’ first number-one, “Where Did Our Love Go” from 1964. But the Dixies’ “Going to the Chapel,” recorded in February 1964 and released that April, was America’s number-­one pop song for three pealing weeks. It ruled in the Monte Carlo as an oldie, and gleams still with a kind of confidence in romantic commitment that—­were it not for songs like this—­I could doubt exists at all.

Rosa Lee Hawkins and Barbara Ann Hawkins are sisters, born and raised in New Orleans. They are two-­thirds of the Dixie Cups. Barbara Ann is the older by three years. They share a modest home. In 2013, they’re in their seventies and have survived Hurricane Katrina together. With their cousin Joan Marie Johnson, the trio recorded “Chapel of Love.”

“Chapel of Love” sold over a million copies, dominated radio, unseated the Beatles’ “Love Me Do” from number one on Billboard’s pop chart, and propelled the young women to a brief and hot stardom that could not compete with the more lasting impact of the Supremes. From the short a cappella rise to the finger snaps to the alternation between the soft g of Gee I really love you and the hard g’s of gonna get married—­the cadence of “Chapel of Love” is consistent, and mesmerizing.

Spring is here, the

Birds all sing as

If “Chapel of Love” is confection, it is each listener’s own individual favorite, and most of the later covers of the record—­the Beach Boys’ in 1976, Elton John’s in 1994—­basically align themselves with the Dixies’ vocal arrangement. But Bette Midler went in a different direction.

Midler’s cover of “Chapel of Love” appears on her 1972 debut, The Divine Miss M, an album on which she, with expressive freedom, braids Barbra Streisand, Broadway, and the earnestness of girl group songs like the Shangri-­Las’ 1964 “Leader of the Pack” and “Chapel.” Divine begins with Easter-­worthy bells, skips the slow intro, and rips into a Blackish, raucous delivery. Even with tongue in cheek, Midler’s homage is weighted with the irony of a white woman covering a song by a group of Black women who in their original are deploying strategic enunciation.

“Proper” English diction is associated with white people in general and rings off in the pop of white stars from the Andrews Sisters to Doris Day. “Properly” is what Blacks have been accused of being unable to speak since their chained arrival in the colonies. Midler, with a wink, goes with an ad-libbed churchiness. How free she sounds singing in ways Blacks were pressed to dial back—­if they wanted to succeed.

“We grew up in the Calliope Projects,” Barbara Ann Hawkins tells me. “Which, back then, was nothing like projects are today.”

Completed in 1941 over what had been a city dump, Calliope is the original name of what became in 1981 the B. W. Cooper Apartments in Central City, New Orleans. It was for many decades known as one of the most violent housing projects in the nation. Rapper/entrepreneur Master P and his brother, the rapper Silkk the Shocker, grew up there in the 1980s.

In the Dixie Cups’ era, the projects and ’hood known as Calliope had its own Boy Scout troop. Kites flew in open areas. Folks ate at Joe’s Po Boys, and knocked back a few at the Rose Tavern. Black kids swam at nearby Rosenwald Center, then the “only such facility available to African American children” in New Orleans. The Neville Brothers also grew up in Calliope, near the Dixies—­Art Neville won a talent show at Rosenwald.

The Hawkins sisters’ parents were separated. “We were fortunate . . . to have a strong mother,” says Rosa Lee. “She was not going to allow us to go down that road of I can’t get into school because I’m Black,’ or ‘I can’t do this because I’m Black—­that was forbidden in my house. My mom was . . . a Girl Scout leader.”

Her mom, Mrs. Hawkins, was from Crowley, Louisiana—­population less than ten thousand. All-­Black schools situated among meticulously maintained antebellum mansions featured outdated books from all-­white schools. Mrs. Hawkins got herself away from the old rice plantations to New Orleans and sang in cornetist Papa Celestin’s Original Tuxedo Jazz Orchestra. She also sang with her daughters.

“We knew we could sing when we were kids,” says Barbara, “because we used to do trios in [our Baptist] church with mom. And Rosa and I were always in whatever choir they had for our age bracket. . . . We knew we could sing, but we thought everybody in the world could sing. I thought it was something that came natural to everybody.”

But Mrs. Hawkins’s ambition couldn’t protect her daughters from the truths of their environment.

Danyel Smith is an author, award-winning journalist, and producer. She’s the creator and host the Spotify-exclusive Black Girl Songbook, a music and talk show that centers black women in music. A 2021 Yaddo Fellow, Danyel was a senior producer and editor at ESPN, and a John S. Knight Journalism Fellow at Stanford, where she cofounded HRDCVR, an innovative hardcover culture magazine. In addition to writing for NPR, The California Sunday Magazine, The New Yorker, Teen Vogue, and The New York Times, Danyel has served as editor of Billboard, editor at large at Time Inc., and editor in chief of Vibe. The author of two novels—More Like Wrestling (2003), and Bliss (2005)—Danyel lives in Los Angeles with her husband, Elliott Wilson.

A Very Personal History of Black Women in Pop 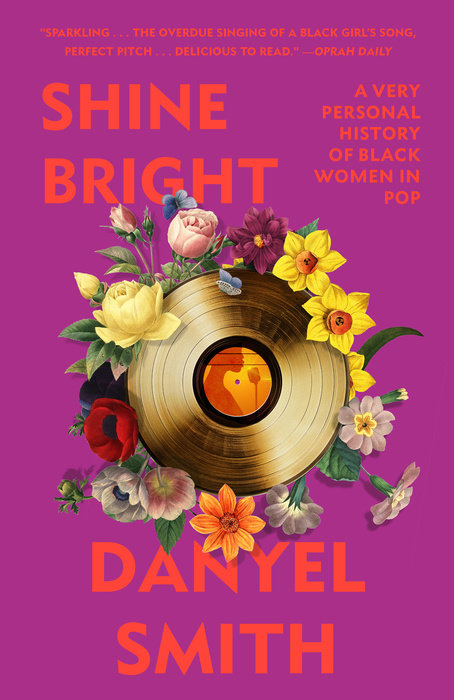