NEW YORK TIMES BESTSELLER • The “imperative call to action” (Nick Offerman) for parenting tough, curious, and competent kids who feel at home in the outdoors, from the New York Times bestselling author and host of the TV series and podcast MeatEater

“A revelation for families struggling to get kids to GO OUTSIDE, or to just stop using the darn smartphone.”—Michaeleen Doucleff, PhD, New York Times bestselling author of Hunt, Gather, Parent

In the era of screens and devices, the average American spends 90 percent of their time indoors, and children are no exception. Not only does this phenomenon have consequences for kids’ physical and mental health, it jeopardizes their ability to understand and engage with anything beyond the built environment.

Thankfully, with the right mind-set, families can find beauty, meaning, and connection in a life lived outdoors. Here, outdoors expert Steven Rinella shares the parenting wisdom he has garnered as a father whose family has lived amid the biggest cities and wildest corners of America. Throughout, he offers practical advice for getting kids radically engaged with nature in a muddy, thrilling, hands-on way, with the ultimate goal of helping them see their own place within the natural ecosystem. No matter their location—rural, suburban, or urban—caregivers and kids will bond over activities such as:
• Camping to conquer fears, build tolerance for dirt and discomfort, and savor the timeless pleasure of swapping stories around a campfire.
• Growing a vegetable garden to develop a capacity to nurture and an appreciation for hard work.
• Fishing local lakes and rivers to learn the value of patience while grappling with the possibility of failure.
• Hunting for sustainably managed wild game to face the realities of life, death, and what it really takes to obtain our food.

Living an outdoor lifestyle fosters in kids an insatiable curiosity about the world around them, confidence and self-sufficiency, and, most important, a lifelong sense of stewardship of the natural world. This book helps families connect with nature—and one another—as a joyful part of everyday life.

An excerpt from Outdoor Kids in an Inside World

The fat from a whitetail deer is waxier than beef fat and has a higher melting point. If you’re eating a particularly fatty cut of venison, such as ribs or neck, taking a sip of cold water can cause the fat to solidify and coat the inside of your mouth. It can be pretty off-putting. People usually compare it to having a sip of candle wax. What’s more, it doesn’t always have a good flavor, and the flavor only gets worse when it’s been in the freezer for a few months. My brother uses venison fat to make hand lotion and lip balm that he gives out as Christmas gifts, but culinary uses are fairly limited.

I was explaining all of this to my kids one day while we were butchering James’s first whitetail deer in our kitchen. He had killed the deer after he turned ten and became old enough to hunt alongside a licensed mentor here in Montana. In doing so, he was following in the well-worn footsteps of a family of hunters that included not only his father, but also his uncles, his grandfather, and two great-grandfathers. This particular doe had been living near some irrigated agricultural fields and had built up an impressive layer of fat. As we worked, the pile of trimmed fat grew big enough that it seemed awfully wasteful to just throw it in the trash. This got me thinking about gray jays and magpies, which absolutely love the stuff. I started telling the kids how those birds will actually learn to associate humans with food; they’ll sometimes follow you around while you’re hunting, as though convinced that it’s just a matter of moments until you produce for them a massive windfall of fat and protein. They’ll get so excited when you’re butchering a carcass in the field that they’ll nervously risk coming within arm’s reach to snatch away gobs of fat. I appreciate their boldness, but I usually make it easier for them by hanging some bits of fat on nearby tree limbs so that they can enjoy their meal without fear of getting caught by this strange, two-legged predator that seems intent on hogging the bulk of the meat.

When we finished our butchering job, I froze the trimmed fat into a solid gob about the size of a volleyball. The next morning, I tossed it up on a section of our rooftop that we could see from the living room window. The swarm of magpies that descended on the fat within a day’s time was remarkable enough that the kids begged to use my phone so that they could send around a video of the feeding frenzy to friends and relatives. That night, we enjoyed a meal of venison that came from the same deer that the magpies outside were eating at that very same moment. I mentioned to them that we should feel as lucky as those birds to have such a fine meal.

The most interesting thing about the experience with the deer fat, at least for me, was a subtle shift in the relationship between my kids and the local magpies. Prior to the fat incident, the kids were aware of magpies at least in the theoretical sense. If you had asked them, they would have described the birds as black-and-white with long tails. We had magpies listed on our tally of the birds that visit our yard. After the fat incident, however, the kids discussed magpies with a far greater level of intimacy and knowledge. Of particular interest to them was the magpies’ ability to assess risk. Within days of discovering the fat, the birds developed precise notions about the physical capabilities of our dog. They managed to hop around within feet of her, in a perfectly nonchalant fashion, without ever giving her a chance to sink her teeth into their feathers. These interactions became an endless source of fascination and conversation in our household.

I recognize that butchering deer and feeding fat to magpies might seem a bit extreme, especially for parents who are struggling just to get their kids out of the house for an hour-long trip to the park. But my point is to accentuate the types of interactions that I try to foster between my kids and nature. Beyond the imperative of getting my kids out of the house, my goal is to put them on equal footing with the surrounding landscape and its creatures. I want them to conceptualize themselves as being part of nature, so that they see it on an eye-to-eye level.

It’s an approach that sits between two poles, one that I’ll call looking down at nature and the other looking up. Our society is well accustomed to the perils of the former. To look down at nature is to regard it as lowly, dirty, savage, or uncouth. It’s the mindset that regards worms as gross, dirt as filthy, and wild animals as flea-bitten and dangerous. This view of nature leads inevitably to desecration. It creates room, morally and spiritually, to disregard nature or permanently destroy it in the name of progress or civilization. To demonstrate what I mean on a minor scale, I’ll explain what happened along the shores of the small Michigan lake where I grew up. When I was a kid, the lake was bordered by a shoreline of reeds, downed trees, and overhanging weeping willows that provided habitat for muskrats, ducks, frogs, and all manner of fish species. The shoreline buzzed and crawled with life. As magical as it seemed to me, many people didn’t like it that way. They didn’t like the muck and mud that oozed between their toes. They didn’t like the feeling of reeds brushing against their bare ankles or aquatic vegetation grabbing at their toes. They didn’t like the creepy crawlies that slithered and swam. Eventually, a resident of the lake solved these problems with an application of herbicide followed by a dump-truck load of sand. This approach caught on, and over the years large stretches of lakeshore habitat were wiped clean to resemble the beaches at all-inclusive ocean resorts. If you asked around, no one would tell you that they destroyed their beach habitat out of a hatred for nature. They’d just say that sand feels good and looks good, end of story. The wildness that was buried beneath the sand and herbicide would be irrelevant to the conversation, because it was never considered in the first place. Such are the perils of looking down at nature, which, in some cases, could be described as not seeing nature at all.

While preservationism makes sense from a purely environmental standpoint, I do believe that looking up at nature comes with its own human risks—especially for kids. Think of those millions of tourists who visit Yellowstone National Park every year, just a ninety-minute drive from my house. Many of them never even leave their cars or the parking lots. There they are, visiting some of the most stunning displays of the natural world on earth, and they do so only by looking through the glass of a windshield or standing behind some sign that warns of the dangers posed by wildlife or bubbling geysers. Sure, grown-ups can easily understand the logic behind enforcing passive observation of these natural wonders. If hordes of people were allowed to trample everything in Yellowstone, the magic of the place would be diminished. But kids don’t necessarily enjoy that level of insight, and I can’t help but wonder about the sense of displacement and alienation that we create in our children by cordoning them off from nature. Imagine for a moment if Disneyland took the same approach. Imagine that the rides are there only to be looked at and never ridden. Imagine if we explained that Mickey and Minnie, or Elsa and Anna, are too pure to be touched by the marauding, corrupting hands of our children. Would Disneyland still enjoy the position that it holds in our children’s hearts? Or would they quickly lose interest and move on to other things? If such visits are balanced by journeys to places where our kids are welcome to get muddy and bloody by mixing it up with nature, that’s great. But if their only exposure to nature is in places where protective barriers are necessary, how can we expect our kids to feel connected to the natural world? If we want our kids to feel a true and pragmatic sense of stewardship for the environment, we need to let them relate to it as a peer, as something that they’re entwined with through symbiotic connections. 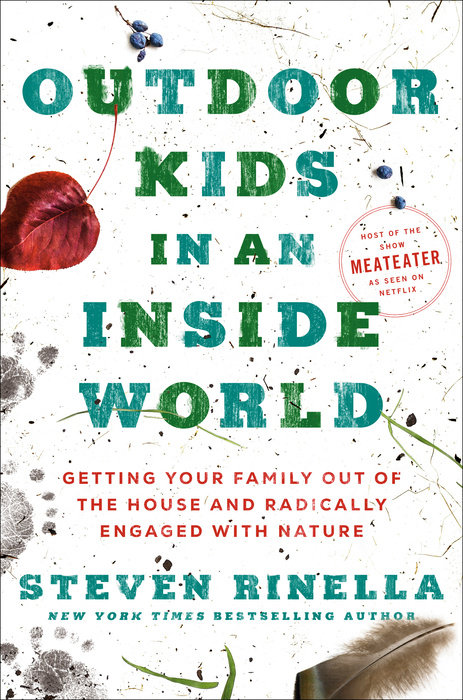