From Sleep Training to Screens, Thumb Sucking to Tummy Time--What the Science Says

Every baby- and toddler-care decision sends parents scrambling to do the right thing, and often down into the rabbit hole of conflicting advice. Dr. Tina Payne Bryson has sifted through the reliable research (including about all those old wives’ tales) and will help you make a manageable molehill out of the mountain of information and answer more than sixty common concerns and dilemmas, including

• Breast or bottle? Or breast and bottle? Will that cause nipple confusion?
• What’s the latest recommendation for introducing solids in light of potential allergies?
• Should I sign us up for music and early-language classes?
• What’s the evidence for and against circumcision?
• When is the right time to wean my baby off her pacifier?
• How do I get this child to sleep through the night?!

Dr. Bryson boils things down with authority, demystifying the issues in three distinct sections: an objective summary of the schools of thought on the topic, including commonly held pros and cons; a clear and concise primer on “What the Science Says”; and a Bottom Line conclusion. When the science doesn’t point clearly in one direction, she guides you to assess and apply the information in a way that’s consistent with your family’s principles and meets your child’s unique needs. Full of warmth, expert wisdom, and blessedly bite-sized explanations, The Bottom Line for Baby will help you prioritize what you really need to know and do during the first year of precious life.

An excerpt from The Bottom Line for Baby

Is it OK to drink alcohol while nursing?

Perspective #1: Just as you wouldn’t consume alcohol while pregnant, you don’t want your newborn to ingest it through breast milk.

Perspective #2: Responsible drinking won’t hurt the baby. Life is already restrictive enough for nursing mothers. There’s no good reason to take away something else.


What the Science Says

Since the scientific literature regarding this question is still evolving, it’s difficult to draw a clear line in the sand. If you want to eliminate all risk, the safest approach is not to drink at all when you’re nursing. But there is scant scientific evidence that drinking alcohol poses a risk to a breastfeeding baby. Many health organizations and regulatory authorities still take what one article calls a “better safe than sorry” approach and recommend drinking only in moderation. According to the CDC, moderate alcohol consumption—­defined as one standard drink per day—­is not known to be harmful to a newborn, especially if the mother waits a couple of hours after drinking it before nursing. The AAP agrees and states that “ingestion of alcoholic beverages should be minimized and limited to an occasional intake,” specifying that it should be no more than “approximately 2 oz liquor, 8 oz wine, or 2 beers.”

Exposure to more than this moderate amount has the potential to negatively affect not only growing babies’ development and growth but also their sleep patterns. And, contrary to certain previous beliefs that alcohol increases milk production, studies show that it can actually limit the let-­down reflex (although this is compensated for in the following hours by the baby consuming more). It’s worth noting, too, that expressing milk and then discarding it may not prevent the baby from ingesting any alcohol. The alcohol level in breast milk is based on the amount of alcohol in the mother’s bloodstream. The idea that the baby’s exposure is eliminated if you use the “pump and dump” method is outdated, and that’s no longer considered the safest way to prevent alcohol from being in your breast milk. As long as you have alcohol in your bloodstream, it can also be in your breast milk. So if you drink more than a moderate amount and your blood alcohol content is high (say, at a wedding or other celebration), it’s safest to feed your baby stored milk or formula in the meantime before breastfeeding again hours later.

Finally, and not insignificantly, too much alcohol can obviously impair a mother’s ability to be present to her baby’s needs and make good decisions as she takes care of her infant.

It may surprise you, but ultimately there’s no evidence that drinking in moderation is going to harm your breastfed child, especially if you take necessary precautions. According to the AAP and the CDC, you can have a drink, wait a couple of hours, and then nurse. If you follow that recommendation, you don’t have to worry that your baby will ingest the alcohol through your breast milk. If you want to be extra cautious, you can pump milk beforehand and use the stored milk when it’s time to nurse. Some mothers may feel more comfortable not taking any risk and choose to forgo all alcoholic drinks until they stop nursing. Others, though, will want to have a glass of wine on the (rare?) night out, or a beer at the end of a (much less rare) exhausting day.

Antibiotics are the most common drugs used for children in Western countries. They offer clear benefits, but science has demonstrated definite downsides as well. Are they safe for babies?

Perspective #1: Research has linked antibiotics to all kinds of health problems, and they’re particularly dangerous for kids. Antibiotics kill bacteria but are useless in treating viruses, and it’s often difficult to distinguish between bacterial and viral infections in infants, especially those under three months. So doctors will often overprescribe antibiotics “just to be safe,” meaning that babies might be taking a powerful and potentially dangerous medicine for no reason at all.

Perspective #2: Yes, antibiotics come with a certain amount of risk. But without them, infections could potentially get worse and worse. As with any other medicine, parents should be judicious with the use of antibiotics and follow a doctor’s lead when they are prescribed. But they are absolutely necessary in many situations, and the benefits outweigh the dangers.

What the Science Says

Antibiotics are extremely effective at killing bacteria and can effectively treat common childhood bacterial infections such as strep throat, urinary tract infections, and recurring or severe ear infections. But like any medication, they can present problems as well. For example, 10 percent of children who take antibiotics will experience side effects including rashes, allergic reactions, nausea, diarrhea, and stomach pain. Antibiotics have also been linked to childhood obesity, metabolic and immunological diseases, asthma, and bowel disorders, and they’ve been associated with a long-­lasting shift in microbiota composition and metabolism that affects the childhood microbiome and its ability to prevent disease.

These are particularly concerning realities considering how often antibiotics are overprescribed; the CDC estimates that 30 percent of antibiotic prescriptions are “inappropriate” and unnecessary. The most common example is when they are used in an attempt to treat not bacteria but a virus, against which they are unlikely to have any effect. Antibiotics wouldn’t alleviate symptoms from a sore throat caused by a common cold virus, for example. So when children are unnecessarily treated with antibiotics, they are at risk of suffering the abovementioned negative outcomes without reason.

In addition, when doctors overprescribe antibiotics, the risk increases that diseases will become resistant to the drugs through repeated exposure. The WHO and others have warned about the development of antibiotic resistance and labeled it a global health concern, noting that it can significantly compromise the ability to treat infections.

Antibiotics are a valuable tool that can fight illness and save lives. Some infections, if left untreated, will only get worse and can be dangerous. So be careful about letting the pendulum swing so far that you swear off antibiotics even when they’re actually needed to help your infant get well. But be mindful that these medicines are regularly overprescribed. Overuse of antibiotics can make them less effective, and could potentially even produce harmful, long-­lasting changes in your child’s immune system, gut, and metabolism.

Educate yourself about when antibiotics should be given so that you can ask the right questions and have a more productive conversation with your pediatrician when your child is sick. Ask about the specific bacteria being addressed or the overall strategy being employed. It’s great to have a trustworthy doctor whose approach is aligned with yours, and it’s also essential that you two communicate and work together to make informed decisions you’re both comfortable with.

On a Personal Note

When I was a new mother, I did my best to educate myself about the differences between bacterial infections and viruses and to read up on symptoms my kids had. And still, most of the time, I just decided to trust my pediatrician. Not that a baby is a car, but when my mechanic tells me my exhaust manifold gasket (Is that a real thing?) needs to be replaced, there’s not a whole lot I can do to evaluate his advice. Likewise, when my pediatrician says my infant has an infection and needs an antibiotic, I trust her perspective. I ask questions, but at the end of the day, I have to decide whether to go with my trusted physician’s advice or follow my often fear-­based, shallow, “I play a doctor on TV” opinion.

When you choose a pediatrician, pick someone you feel good about trusting. There will be times when you’re so tired from caring for a sick infant that you’ll need to rely on your doctor to think clearly and make calls that you can follow.

Tina Payne Bryson, Ph.D., is the co-author, with Daniel J. Siegel, of two New York Times bestsellers, The Whole-Brain Child and No-Drama Discipline. She is the founder and executive director of the Center for Connection, an interdisciplinary clinical team in Pasadena, California. She is a licensed clinical social worker, providing pediatric and adolescent psychotherapy and parenting consultations. As well, she keynotes conferences and conducts workshops for parents, educators, and clinicians all over the world. Dr. Bryson earned her Ph.D. from the University of Southern California and lives in Los Angeles with her husband and three children.

From Sleep Training to Screens, Thumb Sucking to Tummy Time--What the Science Says 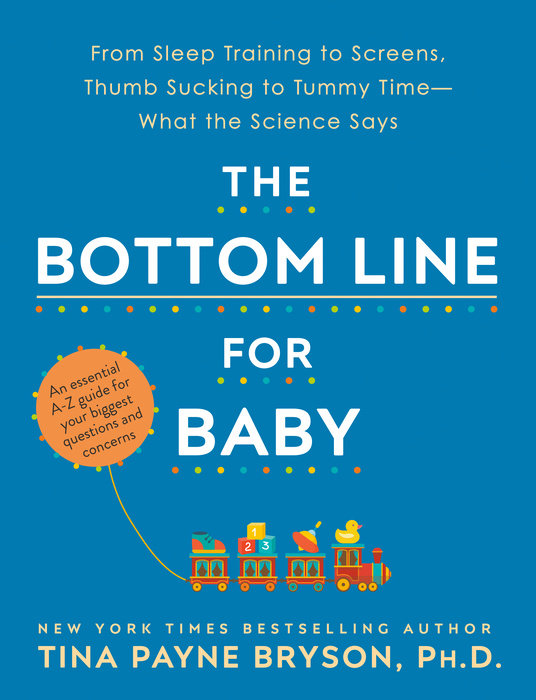