Patriotism, Protest, and the Music That Made a Nation

NEW YORK TIMES BESTSELLER • A celebration of American history through the music that helped to shape a nation, by Pulitzer Prize winner Jon Meacham and music superstar Tim McGraw

“Jon Meacham and Tim McGraw form an irresistible duo—connecting us to music as an unsung force in our nation's history.”—Doris Kearns Goodwin

Through all the years of strife and triumph, America has been shaped not just by our elected leaders and our formal politics but also by our music—by the lyrics, performers, and instrumentals that have helped to carry us through the dark days and to celebrate the bright ones.

From “The Star-Spangled Banner” to “Born in the U.S.A.,” Jon Meacham and Tim McGraw take readers on a moving and insightful journey through eras in American history and the songs and performers that inspired us. Meacham chronicles our history, exploring the stories behind the songs, and Tim McGraw reflects on them as an artist and performer. Their perspectives combine to create a unique view of the role music has played in uniting and shaping a nation.

Beginning with the battle hymns of the revolution, and taking us through songs from the defining events of the Civil War, the fight for women’s suffrage, the two world wars, the Great Depression, the civil rights movement, the Vietnam War, and into the twenty-first century, Meacham and McGraw explore the songs that defined generations, and the cultural and political climates that produced them. Readers will discover the power of music in the lives of figures such as Harriet Tubman, Franklin Roosevelt, Eleanor Roosevelt, and Martin Luther King, Jr., and will learn more about some of our most beloved musicians and performers, including Marian Anderson, Elvis Presley, Sam Cooke, Aretha Franklin, Bob Dylan, Duke Ellington, Carole King, Bruce Springsteen, and more.

Songs of America explores both famous songs and lesser-known ones, expanding our understanding of the scope of American music and lending deeper meaning to the historical context of such songs as “My Country, ’Tis of Thee,” “God Bless America,” “Over There,” “We Shall Overcome,” and “Blowin’ in the Wind.” As Quincy Jones says, Meacham and McGraw have “convened a concert in Songs of America,” one that reminds us of who we are, where we’ve been, and what we, at our best, can be.

An excerpt from Songs of America

The Sensations of Freedom

“By uniting we stand, by dividing we fall.”

“Objects of the most stupendous magnitude, measures in which the lives and liberties of millions, born and unborn, are most essentially interested, are now before us. We are in the very midst of a Revolution, the most complete, unexpected, and remarkable of any in the history of nations.”

—Abigail Adams, to her husband as the Founders debated independence

Night was about to fall. As daylight faded on Friday, June 10, 1768, officials of the British Crown stepped across the wharves of Boston Harbor to seize the Liberty, a sloop owned by the merchant John Hancock of Massachusetts. The charge: that Hancock’s men had smuggled casks of Madeira wine from the Liberty’s hold to avoid paying stiff duties recently imposed under the hated Townshend Acts. Anticipating trouble, the imperial authorities had deployed the heavily armed warship HMS Romney—which contemporaries described as a “fine new 50-Gun ship”—for the task. “This conduct provoked the People, who had collected on the Shore,” The Boston Gazette reported, and the gathering of colonials surged toward the British collector of customs, Joseph Harrison, as he came back off the Liberty. On the street adjoining the harbor, Harrison wrote, “we were pursued by the Mob which by this time was increased to a great multitude. The onset was begun by throwing dirt at me, which was presently succeeded by volleys of stones, brickbats, sticks, or anything that came to hand. . . . About this time I received a violent blow on the breast which had like to have brought me to the ground, and I verily believe that if I had fallen, I should never have got up again, the People to all appearance being determined on blood and murder.”

The royal governor of Massachusetts was flummoxed, denouncing what he called this “Great Riot” in dispatches to London. The colonials, naturally, had a different view. To them, the specter of the Romney taking control of Hancock’s Liberty was an outrage, a veritable act of war. “We will support our liberties,” a patriot leader cried in the wake of the seizure, “depending upon the strength of our own arms and God.”

Hearing the news, John Dickinson of Pennsylvania was moved to pick up his pen to strike a blow in favor of the colonial cause. Born in 1732, raised in Dover, Delaware, and trained as a lawyer in Philadelphia and at the Middle Temple in London, Dickinson had recently published an influential series of essays entitled Letters from a Farmer in Pennsylvania, to the Inhabitants of the British Colonies. The Townshend Acts had been the occasion for Dickinson’s Letters; in Boston, Joseph Harrison had found Dickinson’s writings “inflaming and seditious . . . tending to poison and incense the minds of the people and alienate them from all regard and obedience to the Legislature of the Mother Country.”

A sustained attempt to argue for the justice of the colonial view that representation was a civil right in the English tradition, the Letters would bring Dickinson acclaim, including an honorary degree from the College of New Jersey (later Princeton University). “From infancy,” Dickinson had written, “I was taught to love liberty and humanity.”

To him and to many of his readers, taxation without representation—including duties on Madeira—was intolerable. “A free people,” Dickinson had written, “can never be too quick in observing, nor too firm in opposing, the beginnings of alterations . . . respecting institutions formed for their security.” It was essential, he wrote, to guard against the “servitude” that could be “slipped upon us” by new laws and their vigorous enforcement.

His Letters had been prose. Now, in the wake of the clash in Boston, he would try poetry, composing a series of verses in honor of the resistance in Massachusetts. “I enclose you a song for American freedom,” Dickinson wrote James Otis of Boston. “I have long since renounced poetry, but as indifferent songs are very powerful on certain occasions, I venture to invoke the deserted muses.” He told Otis that Arthur Lee of Virginia, a Dickinson friend, had contributed eight lines of “The Liberty Song.” Published in Philadelphia and in The Boston Gazette of July 18, 1768, the song was set to William Boyce’s “Heart of Oak,” a patriotic British number popular with the Royal Navy.

And rouse your bold hearts at fair Liberty’s call;

No tyrannous acts shall suppress your just claim,

Or stain with dishonor America’s name.

Our purses are ready,

Not as slaves, but as freemen our money we’ll give.

Our worthy forefathers—let’s give them a cheer—

To climates unknown did courageously steer;

Thro’ oceans, to deserts, for freedom they came,

And, dying, bequeath’d us their freedom and fame.

Their generous bosoms all dangers despis’d,

So highly, so wisely, their birthrights they priz’d;

We’ll keep what they gave, we will piously keep,

Nor frustrate their toils on the land and the deep.

The Tree, their own hands had to Liberty rear’d,

They lived to behold growing strong and rever’d;

With transport they cry’d, “Now our wishes we gain,

For our children shall gather the fruits of our pain.”

Swarms of placemen and pensioners soon will appear,

If we are to drudge for what others shall spend.

Then join hand in hand brave Americans all,

By uniting we stand, by dividing we fall;

In so righteous a cause let us hope to succeed,

For Heaven approves of each generous deed.

All ages shall speak with amaze and applause,

Of the courage we’ll show in support of our laws;

To die we can bear—but to serve we disdain,

For shame is to freedom more dreadful than pain.

This bumper I crown for our sovereign’s health,

And this for Britannia’s glory and wealth;

That wealth and that glory immortal may be,

If she is but just—and if we are but free.

Dickinson had great hopes for his work. Citing the example of Jean-François-Paul de Gondi, Cardinal de Retz, a wily seventeenth-century French cardinal and adventurer, he wrote: “Cardinal de Retz always enforced his political operations by songs. I wish our attempt may be useful.”

Dickinson’s language was designed to appeal to the emotions of his broad audience. “By uniting we stand, by dividing we fall”; “In so righteous a cause let us hope to succeed”; “To die we can bear, but to serve we disdain”—the song’s message was unmistakable. Unity was all; a common cause would carry the day; the stakes could not be higher.

Here, in the middle of the summer of 1768, eight years before the Declaration of Independence, an American patriot was making a popular case for American identity and for American action not in the staid language of the political press but in the more universal and stirring genre of music. “The Liberty Song” quickly spread. “The music began at high noon,” The Boston Evening-Post reported of a Sunday, August 14, 1768, gathering, “performed on various instruments, joined with voices; and concluding with the universally admired American Song of Liberty, the grandeur of its sentiment, and the easy flow of its numbers, together with an exquisite harmony of sound, afforded sublime entertainments to a numerous audience, fraught with a noble ardor in the cause of freedom.” To John Adams, Dickinson had done something wondrous. “This,” Adams remarked of the song, “is cultivating the sensations of freedom.”

Dickinson’s composition, Kenneth Silverman, a scholar of American Revolutionary culture, observed, “became not so much useful as indispensable. . . . It enabled people to experience directly the idea of strength in unity, by enacting it in boisterous choral singing. . . . By wedding the current political arguments to music, Dickinson knew, he drew on emotional resources that the words alone could not muster.”

Yet America did not declare its independence in the wake of Dickinson’s song, or for eight years afterward. The ensuing period was marked by further taxes and protests, more debate over the nature of representative government, and rising concerns over the role of imperial authority in colonial affairs. How did a group of disparate British North Americans, subjects of the British Empire all their lives, decide to risk everything?

Patriotism, Protest, and the Music That Made a Nation 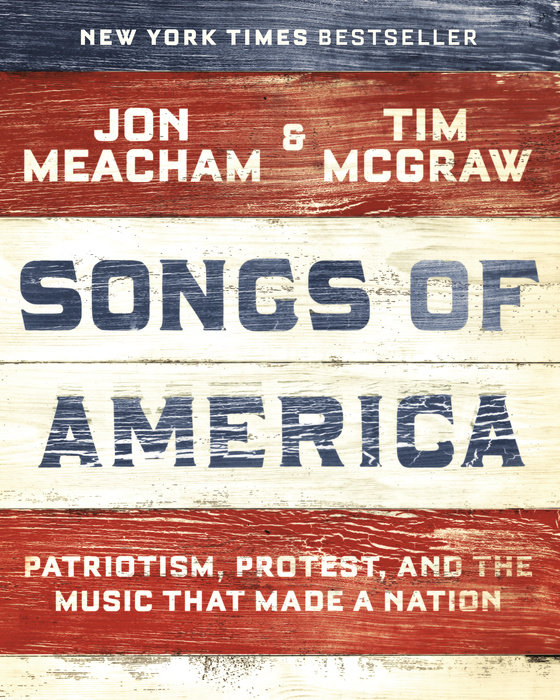