Mary Minor “Harry” Haristeen gets a little help from her veterinarian husband to solve the murder of a young equine vet whose death may be linked to his new clinic in Claws for Alarm, a tantalizing mystery from Rita Mae Brown and her feline co-author Sneaky Pie Brown.

Pharamond “Fair” Haristeen is known throughout Crozet, Virginia, as a good horse vet and a better man. So when Benjamin Wagner, a new vet in town, is found dead in his unopened clinic, local police turn to Fair for help getting to the bottom of things. Fair quickly realizes Ben’s clinic has been robbed of ketamine, used by doctors as a horse tranquilizer but also a popular recreational drug. Then Fair’s own ketamine goes missing from the back of his truck. Was Ben killed for his supply? Or was he mixed up in something bigger?

Meanwhile, Candida Perez, one of Crozet’s oldest and most beloved citizens, is found dead at her desk. Perhaps not so alarming, given her ninety years of life. But the bickering of Candida’s children, Ballard and Constance, over her will and the family’s valuable collection of historical letters, threatens to drive the rest of the town to madness. Fair’s wife, Harry, tries to play peacemaker, but the bad blood between the two siblings runs deep. Just how far will they take their family squabble?

With a little aid from hungry helpers Tee Tucker the corgi and sweet puppy Pirate, as well as feline sleuths Mrs. Murphy and Pewter, Harry and Fair team up to restore justice—and maybe a little peace and quiet—in Claws for Alarm.

An excerpt from Claws for Alarm

Fairy skirts twirled through the air. Glossy white, tiny seeds dispersed into seven-mile-per-hour winds. Milkweed balls, equally as glossy, floated along with the fairy skirts, which some people call Devil’s dandruff. All living creatures—whether two-legged, four-legged, or plant—were responding to the loss of light, the cooler night temperatures.

Pharamond Haristeen, DVM, all six feet four inches of him, stood in the aisle of Big Mim Sanburne’s perfect brick stable. He looked out the opened doors to watch the parade of skirts, the tiny ballerinas filling the air. The walkway to the stable gleamed white from all the fairies that had fallen.

Returning to Loulou, a large gray mare, now in her late teens, he knelt down, ran his hands over her swollen hind leg.

Big Mim, standing behind him as Paul, her stable manager, held her halter, mentioned, “Those fang marks are so noticeable.”

“Gray horses are harder to keep clean but it is easier to see in a situation like this.” He gingerly, gently touched her. “Good girl.”

“Is she drugged?” asked Tucker, Fair’s corgi, sitting properly to the side of the aisle.

Fair took his two dogs with him today, figuring it was like take-your-daughter-to-work day. Tucker was the female; the Irish wolfhound, Pirate, just turning one year old, was male. Pirate sat watching everything. He was trying to learn the business.

The young man, married to Tazio Chappers, one of Fair’s wife’s best friends, nodded. “She wasn’t moving well so I walked out and saw the swollen leg plus the marks. Had that snake struck a dog, the animal would be dead.”

“What an awful thing to say,” the corgi grumbled, then peered more closely at Loulou. “She’s not drugged.”

“How can you tell?” The young wolfhound was curious.

“A horse hangs her head. Nods off. I should have noticed right away.” Tucker puffed out her chest. “I’ve been working with Daddy for years. You wouldn’t believe what I’ve seen.”

Fair had put his bag on a tack trunk. His dually truck was outfitted with everything. Truly a moving equine hospital, it included the latest high-tech equipment and rows of meds costing as much money as human medication, and for some, even more. He reached for bandages, set them on the tack trunk. Pulled out a needle, a small bottle of Gentocin, another one of Excede antibiotic/MI, and also dexamethasone.

Patting Loulou’s neck, he then pinched some skin and injected the Gentocin. “One down.”

He filled the Excede and repeated the process. “Two down!”

In went the dexamethasone.

“How long before the swelling subsides?” Big Mim spoke again.

“You should notice tomorrow. Given her excellent state of health, I think the leg will be normal size in three or four days but it might still be ouchy. Those fangs bit deep.”

“Betadine?” Paul asked about an antiseptic.

“Yeah. We cleaned her up pretty good but I’d unwrap her, wash it each day, then wrap up again. I’m leaving you some chlorhexidine wipes, too.” Fair knelt down to wrap her leg, not tight but not loose either.

The last thing one wants is for a wrap to unravel.

Uncrossing her arms, Big Mim, now in her early eighties, stepped up to the beloved mare and ran her hand over a well-muscled hip. “Best hunt horse I ever had.”

“Icecapade blood.” Fair knowingly cited her illustrious bloodline. “So many went to the track. She was lucky to come here and enjoy a different kind of life.”

Fair handed Paul a bottle of Excede, an antibiotic, quick working. “Put her in her stall. Keep her quiet. No point in helping the poison spread, but I think you got her in time. It had to be a copperhead. They’re everywhere right now. Getting ready for winter.”

Paul slid the stall door closed, as Big Mim had replaced the old Dutch doors with one-piece doors looking almost like chain link. This allowed good airflow, vital in summers. In winter you closed up the barn and perhaps threw an extra blanket on. It was summers that wore you and the horses out. He walked back to Fair, who was writing in his notebook.

Tearing the page off he handed it to Paul. “Okay. In four days give one dose of the Excede and then four days later another. Fifteen milliliters. Do you have enough needles?”

“Hand walk her in the barn. When the swelling is completely down, turn her out in a small paddock. My caveat is, if she stocks up, turn her out sooner but keep an eye on her. No equine hijinks.” He laughed. “My memory of Loulou is she expressed a lot of personality.”

The three of them laughed, for the mare, a happy creature, knew how to untie her lead rope if not tied tightly. She would visit other horse trailers if at a hunt meet. Should the food look better than what she was eating, she’d try to stick her head in that bucket. Loulou was not above stealing another horse’s blanket if folded or on the wheel well. Cowboy hats were a big favorite, too. Big Mim forked over cash for many a new cowboy hat.

“Thank you for getting here so quickly. I know how busy you can be.” Big Mim smiled at Fair, whom she had known all his life.

Teased as the Queen of Crozet, Big Mim automatically took charge. Her husband had been elected mayor of the tiny town so often, he had the office for life. Their daughter, Little Mim, languished in the wings, but now she had a child soon ready for kindergarten so she discovered the labor of parenting. If nothing else she had never answered so many “Why?” questions in her life, nor had her husband.

“So far it’s been a light Friday. Anyone else need a look?”

Fair glanced out the open barn doors. “Have you ever seen so many milkweeds? It’s a blizzard.”

“Good for the monarch butterflies.” Big Mim cared about butterflies and much else.

“That it is. Well, let me be on my way. Loulou should be fine. If not, you know where I am. Got to keep the old girl going.”

Picking up his bag, he walked into the “snow”storm, head soon white from the fallout.

“Does.” Tucker agreed as a milkweed landed on her black wet nose.

Opening the passenger door, Fair slid his bag onto the floor then opened the back door for Pirate while he lifted up Tucker. He loathed the size of the double-door truck but he could stash more in it, plus he had a built-in box covering most of the bed, which he could lock. That contained the X-ray machine, the ultrasound equipment, rows of drugs, whatever he needed.

“Good kids.” He shut the doors, climbing in front.

Driving down Big Mim’s long driveway, he marveled as he always did at the beauty of her estate. Stopping at the end he picked up his cell.

“Hey back at you. How was Loulou?” his wife, Harriet Haristeen, called “Harry,” asked.

“Same as always but that copperhead nailed her. She’ll be fine. Big Mim watched. She loves that horse. The girls there yet?”

He referred to Harry’s best friends, Susan Tucker, who had bred Tucker, the corgi, and Tazio Chappers, an architect who had married Paul two years ago. The restoration of the old so-called colored schoolhouse from the late nineteenth century onward was an important project for all of them. The term colored causing no end of trouble, which lasted to this day. “The girls,” as they thought of themselves, were determined to use the school to help schoolchildren learn about the old days by spending time in the old space.

“Coming down the driveway now.”

“If I don’t get an emergency call I should be home by three.”

“That would be a miracle.”

“On my way to Ben Wagner. He’s finally set up his clinic and wants me to make suggestions. I give any young vet credit who goes out on his or her own. The cost alone could give you a heart attack.”

“Ben? Oh, maybe late thirties, mid-thirties. About the same age as Tazio and Paul. Well, see you in a few hours, I hope. How about we both clean up and go out to dinner?”

“Sounds wonderful.” She paused. “Susan, come on in. What have you got?”

“A disgustingly rich apple pie,” Susan answered as she walked through the door followed by Tazio.

“Bye.” He clicked off, turned right, drove through Crozet toward White Hall, and then turned left next to a vineyard where fences gleamed, for Ben had them newly painted; his new buildings and barn, also freshly painted, maybe a quarter of a mile away, looked terrific.

Tucker, face pressed to the window, observed every single thing. Pirate, on the other side, also watched. 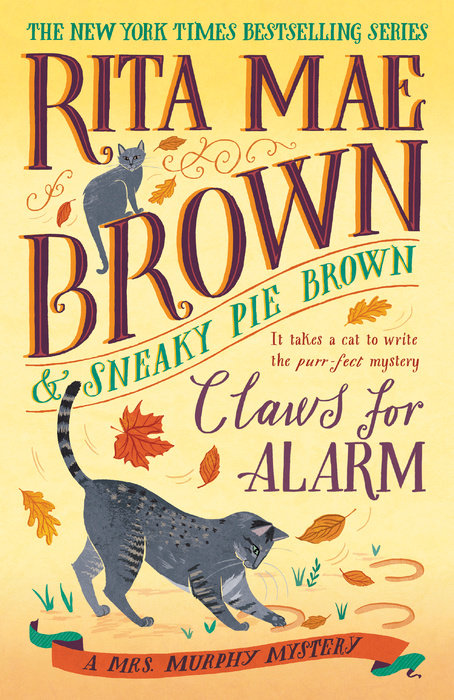