A never-before-seen collection of deeply personal love letters from Kurt Vonnegut to his first wife, Jane, compiled and edited by their daughter

“A glimpse into the mind of a writer finding his voice.”—The Washington Post

“If ever I do write anything of length—good or bad—it will be written with you in mind.”

Kurt Vonnegut’s eldest daughter, Edith, was cleaning out her mother’s attic when she stumbled upon a dusty, aged box. Inside, she discovered an unexpected treasure: more than two hundred love letters written by Kurt to Jane, spanning the early years of their relationship.

The letters begin in 1941, after the former schoolmates reunited at age nineteen, sparked a passionate summer romance, and promised to keep in touch when they headed off to their respective colleges. And they did, through Jane’s conscientious studying and Kurt’s struggle to pass chemistry. The letters continue after Kurt dropped out and enlisted in the army in 1943, while Jane in turn graduated and worked for the Office of Strategic Services in Washington, D.C. They also detail Kurt’s deployment to Europe in 1944, where he was taken prisoner of war and declared missing in action, and his eventual safe return home and the couple’s marriage in 1945.

Full of the humor and wit that we have come to associate with Kurt Vonnegut, the letters also reveal little-known private corners of his mind. Passionate and tender, they form an illuminating portrait of a young soldier’s life in World War II as he attempts to come to grips with love and mortality. And they bring to light the origins of Vonnegut the writer, when Jane was the only person who believed in and supported him supported him, the young couple having no idea how celebrated he would become.

A beautiful full-color collection of handwritten letters, notes, sketches, and comics, interspersed with Edith’s insights and family memories, Love, Kurt is an intimate record of a young man growing into himself, a fascinating account of a writer finding his voice, and a moving testament to the life-altering experience of falling in love.

An excerpt from Love, Kurt

I found these letters written from my father, Kurt Vonnegut, to my mother, Jane Marie Cox, deep under the eaves of the attic in the big old house where I grew up, buried beneath fifty-five years of the flotsam and jetsam that our mother would not or could not throw away. Every report card, every cocktail napkin, every Christmas card ever received was there. A single ice-skate guard; broken reel-to-reel tape players; moldy sleeping bags; mess kits; stacks of vinyl records; Sears, Roebuck catalogs from the 1950s. On the very bottom of these strata was a squashed white gift box sealed with brittle yellowed tape.

Over the years, the attic’s contents had been dripped on from a leaking roof, gnawed on by mice, and sprinkled with acorns from squirrels that had somehow gained entry. Draped on top of everything were slabs of pink cotton candy–like insulation that had fallen down from between the rafters. I’d seen plenty of places like this while foraging at estate sales, but never so dense and familiar. Our mother had a certain sense of tidy order, but zero editing skills. She thought everything mattered or would eventually. Any organization she’d hoped to keep was destroyed by us kids regularly tossing it all like a salad when looking for something, or stuffing additional items in there for safekeeping. An undiscerning eye would have scanned the sodden pile and chucked the whole lot.

But while my mother was a natural hoarder, I am a natural scavenger.

Yard sales and dumps are my playground. Always sifting deeper than most, looking for treasure, I have no end of patience for going through piles of apparently worthless stuff. I am a connoisseur of junk, ever searching for the rare and precious. I see now that I was in training to find the most precious treasure of all.

There in the attic, as the archaeologist in me excavated below decades of family accumulation, I found the Lucy of Dad. The earliest inklings of who he was going to become. The first sparks that lit the dazzling Roman candle that was my father. Two hundred and twenty-six letters that he wrote to my mother from 1941, when he was just nineteen years old, to 1945, when he was twenty-four.

Some are typed, using the typewriter as an artistic tool the way a painter uses a brush, and some are handwritten and illustrated in pencil. His penmanship is remarkably legible, and as with the content of his novels, you never have to struggle to decipher what he is saying. These letters show that my father was well formed as a writer at a strikingly young age. He just lacked confidence, an audience, and experience. My mother became his confidante and audience before he dared to even refer to himself as a writer. The experience would come soon enough.

Kurt pursued Jane for four years with these astonishing letters. It is thrilling to read how in love with her he was. She was the single object of his desire. He half-heartedly dated other women and would say they had the right body but the wrong soul. My father’s intense love for my mother, expressed in his crystal-clear handwriting, is breathtaking—and also devastating, knowing what I know now: that he would stop loving her. Would Romeo have left Juliet eventually if they had lived long enough? How could a love so dazzling and singular and determined fizzle?

When I went up to the attic that day, I was not expecting to find more than some old bank statements. The discovery floored me figuratively and literally. I spent the next four hours with the box between my legs, reading letters written seventy-seven years ago. Knowing full well how it all turned out made for a powerful emotional cocktail. My heart broke for my mother and father. I don’t cry very often, but I had to be careful handling the fragile papers as tears slid down my cheeks.

This collection is a portrait of first love and early ambition, and what was found and born and lost between two brilliant young minds and hearts. If I had been my mother when he was leaving twenty-five years later, I would have dug out those letters and thrown them in his face, yelling “What about these!? See how relentlessly you pursued me? You vowed we’d grow old together, love each other forever, and do so much good in this life. What about those promises, you asshole?!!” But my mother wasn’t like that.

Their marriage did not survive, but the letters did. In my estimation they are among his finest writing, right up there with The Sirens of Titan, Cat’s Cradle, and Slaughterhouse-Five. They come from a time and place more passionate, pure, and inspired than any other in his life. He was not writing for fame or money, but to win the love of a woman.

Kurt’s parents were German American, secular humanists. His mother, Edith Lieber Vonnegut, was born to a wealthy beer-brewing family in Indianapolis. The brewery suffered a catastrophic downturn during Prohibition, and the Great Depression further eroded their fortune. Kurt’s father, Kurt Vonnegut, Sr., was the son of the first licensed architect in Indiana and an architect himself. Kurt junior was the youngest of three children, five years younger than his sister, Alice (Allie), and eight years younger than his brother, Bernard. He was the doted-upon baby of the family and enjoyed a loving, lively childhood.

Jane was from a Quaker family of Anglo-Irish descent. Her father, Thomas Harvey Cox, was an Indianapolis lawyer. Her mother, Riah Fagan Cox, held a master’s degree in classical literature; she coauthored a grammar textbook that would go on to become a standard in the field. She also taught at the Orchard School, the primary school that both Kurt and Jane attended. Up until Jane left for college, her life was dominated by the unpredictable health of her brother and mother. Riah was a brilliant scholar and teacher, but she suffered from episodes of mental collapse for which she was periodically institutionalized. Jane’s only sibling, Gussie, was mentally fragile as well, after a surgical accident severed a facial nerve, leaving his face slightly disfigured.

Kurt and Jane attended school together from kindergarten through third grade at the Orchard School in Indianapolis, but they didn’t encounter each other again until they were nineteen, when they both attended a social at the local Woodstock Country Club on August 15, 1941. They discovered they shared a passion for social justice, an altruistic desire to contribute to the world, and a love for art in all its forms. They formed a deep bond that evening and spent almost every minute together for the next ten days, until he left for Cornell University and she for Swarthmore College for their sophomore years. This is when their correspondence began. (My mother’s nickname was Woofy, as you’ll see in the letters. I have no idea why. I don’t think she liked it, because it was never used after college, and when I asked, I never got a satisfying answer.)

Jane was an excellent student. Having always loved books, she majored in literature, with minors in philosophy and history. A former boyfriend once described her as an “extraordinarily cute, lovely young lady with a challenging intellect.”

Kurt, meanwhile, was not a good student. He was poorly matched to his major: chemistry. His father and brother felt strongly that science was the future and had urged young Kurt to study that field. In reality, he spent most of his time editing Cornell’s newspaper, The Daily Sun, and writing to Jane. He was almost singularly focused on her and became frustrated when she did not write more often. Jane, on the other hand, was enjoying a heavy course load and many suitors, as she was enchanting, beautiful, smart, and away from an unhappy home for the first time. Her freedom had just begun. She must have been hesitant to allow Kurt to tie her down so quickly, even though he was already asking her to marry him in his earliest writings to her. His devotion to her was unusual for the time; the norm in the 1940s was for young men and women to date a variety of people. I don’t think Jane was expecting Kurt to become so exclusively enamored with her after their summer romance. That they were in different states and different schools made total commitment extra-impractical.

In May 1942, Cornell informed Kurt that if there was no improvement in his grades, he would not be continuing at the university. He was failing biochemistry and organic chemistry and had been put on academic probation. Despite this, he ignored his junior year classes and channeled all his time into editing the Sun and writing to Jane. They continued to visit each other for parties and events at their respective campuses. (Most of the parties were at Cornell; Swarthmore was more of a buttoned-up institution.)

By December, Kurt was flunking out. He developed a mild pneumonia while home on Christmas break. Meanwhile, Jane was on course to having a stellar academic year, wholly focused on her studies. She didn’t correspond with Kurt as often as he would have liked. All the while, the shadow of the war was looming closer to their lives. 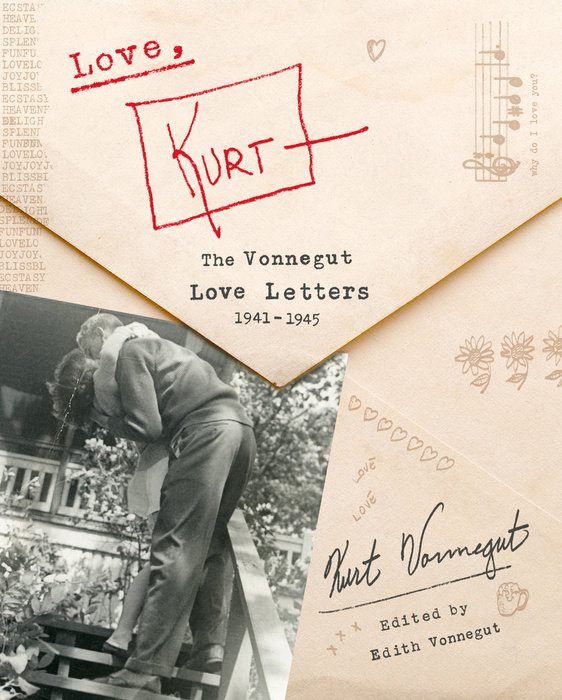