A Memoir of Family

“As nourishing as a three-course Italian feast, this is a fierce, moving tribute to the ties that bind.”—People (Book of the Week)

The #1 New York Times bestselling author of Sleepers offers a heartfelt homage to the women who taught him courage, kindness, and the power of storytelling: his mother, his grandmother, and his late wife.

Standing with his children near his grandmother’s grave on a recent trip to Ischia, an island off the coast of Naples, Lorenzo Carcaterra realized how much of his life has been shaped by the women who taught him how to look for joy and overcome sorrow. This book is his tribute to them.

Nonna Maria, his grandmother, gave him his first taste of a loving home during the summers he spent with her as a teenager on Ischia. With her kindness, her humor, and the same formidable strength she employed to make secret trips for food when the Nazis occupied Ischia during World War II, she instilled in him the importance of community, providing shelter for a boy whose home life was difficult.

His mother, Raffaela, dealt with daily hardships: a loveless and abusive marriage, the burden of debt, and a life of dread. Though the lessons she taught were harsh, they would drive Lorenzo from the world they shared to the better one she always prayed he would find.

The third woman is his wife, Susan, a gifted editor and his professional champion. Their marriage lasted three decades before her death from lung cancer in 2013. While their upbringings were wildly different, their love and friendship never wavered—and neither did her faith in Lorenzo’s talent and potential as a writer.

An excerpt from Three Dreamers

I was fourteen when I first set foot on the island of Ischia, eighteen miles off the coast of Naples, Italy.

I was visiting my mother’s side of the family, strangers to me in every way, and I had no idea what to expect. Yet, somehow, as soon as I stepped off the boat from Naples, surrounded by thick hordes of tourists and locals eager to get to their destination, I knew I was in a better place than the one I had left behind.

I arrived in Ischia a troubled teenager. Back in New York, I left parents waging a daily war over heavy debts and mounting bills, their anger always at full boil, my mother one stinging comment away from receiving a fatal blow at my father’s hand. The constant squabbles, the scams and cons my father pulled on gullible friends and neighbors, hung heavy on my shoulders, with my own fears and concerns. I wanted a different life from the dead-end existence that engulfed me in New York, but I couldn’t figure out where that life would be or where it would lead.

I had argued without success against coming to Ischia, preferring to join friends and a cousin for a month of baseball camp. But money for baseball camp was scarce, especially when a round-trip coach ticket on Alitalia cost a mere sixty-eight dollars, and my father’s fear of the drugs that had invaded our neighborhood far outweighed any qualms I had about getting on a plane to Rome, a train to Naples, and a boat to Ischia.

At least I knew there would be no language barrier to overcome. My mother never bothered to learn English, and the only language I spoke until I started grade school was Italian, specifically the Southern Italian dialect spoken on Ischia. And I had been raised on a steady diet of pasta with clam sauce on Fridays, pasta with red sauce on Sundays, and pasta with lentils or beans or squid or oil and garlic the rest of the week, so I didn’t imagine food would be an issue.

I picked up my bags and made my way through the port, passing massive buses filled with German tourists and cabs waiting to take passengers to their hotels. I spotted several horse-drawn carriages parked on side streets and walked past a handful of coffee bars and gelato stands. In every corner of the port, men stood in small circles, smoking and waving their hands, engaged in animated discussions; old women walked slowly under a hot morning sun, arms linked together in a casual embrace, many wearing loose-fitting summer dresses; younger women, most of them pushing small children in snug strollers, made their way through the crowd, bathing suits clearly visible under their thin wraparounds. It was all so different from the world I had left behind. The sounds, smells, sights were all foreign, but somehow I knew from those very first moments it was a world where I truly belonged.

I reached into the front pocket of my jeans and pulled out a folded piece of paper. My mother had written out the simple set of directions I would need to reach my grandmother’s home.

I walked up Via Roma and made a sharp left just before the start of the steep hill that led to Saint Peter’s Church. A quarter of the way into the narrow walkway, I turned right and took two steps down into a small square that had a stone wall on one side and three homes on the other. It was here, at the last house in the square, that I first saw my Italian grandmother, Maria Mattera Carcaterra.

She was wearing a widow’s black blouse, long skirt, and black sandals. Her thick hair, rolled in the back into a circular bun, was as white as a cloud. She waited until I was at the base of the stairway and casually waved me up. She then turned and headed back into her home, walking with a slight limp favoring her right leg. I made it up the stairs and rested my bags in the foyer. The walls were made of stone and painted white, the large room dominated by a dining table and two small couches. There were two large framed photos on opposite walls, each encased in a thick old wooden frame. One I knew must be of my grandfather, Gabriel, clearly taken when he was a young man. Nonna Maria came out of the kitchen and looked at me. Her eyes were dark and penetrating but with a hint of mischief in them. She stepped closer to me and I reached out my right hand, ready to shake hers and kiss her on both cheeks, as I had been told was the customary way to greet friends and family. She ignored my outstretched hand and wrapped her arms around me, holding me close to her for several moments, neither one of us saying a word. She then kissed me on top of my head, held me for a few seconds longer, and relaxed her arms. “The bathroom is down the hall,” she said in Italian, nodding toward the rear of the apartment as she made her way back to the kitchen. “Wash up, change clothes if you like. Take any of the back rooms. Lunch will be ready in about ten minutes. You should be hungry after such a long trip.”

I picked up my bags and looked into the kitchen as I made my way toward the hallway off the living room. “My mom told me you’re a great cook,” I said.

She turned toward me, a large wooden spoon in her right hand, pots and pans taking up every inch of the stove top. Behind her were an assortment of plates filled with roasted peppers, marinated eggplant, grilled artichokes, and a tomato and red onion salad. Nonna looked at me and shrugged. “I don’t do anything,” she said. “The stove does all the work.”

By the time I came back into the main room of the house, the dining table was filled with platters of food. I sat on a hardback wood chair and waited for Nonna to come join me. She walked in holding a pot of espresso in one hand and a small cup in the other and sat across from me, the framed photo of my grandfather, her husband, gazing down at her. She nodded to the bottle of wine in the center of the table. “Eat and drink as much as you want,” she said. “There’s plenty more of everything in the kitchen. Your mother lets you have wine with your meals?”

I nodded. “Since I was four years old,” I said. “She mixes it with water.”

“Water is for flowers,” Nonna said, reaching for the bottle of red wine and pouring me half a glass.

Her arms were folded on the table, one gnarled hand on top of the other, the coffee cup resting between them. “Aren’t you going to eat?” I asked.

She gazed down at her cup of coffee. “This is all I need for now,” she said.

I filled my plate and ate in silence for several minutes while Nonna refilled her coffee cup. “Is this where I’ll be staying?” I finally asked, as I cut through a large stuffed red pepper. “Here with you?”

“My door is always open,” Nonna said. “You can stay here for the summer or spend some time in the apartment building on Via Casciaro. Many of your aunts, uncles, and cousins are spending the summer there. It would be good for you to get to know them. For you to meet your family. But that’s up to you.”

“I’ve never been there,” Nonna said. “I don’t think I ever will go. I had it built for my children and for their children. I belong here, in my own home.”

“It must be nice,” I said. “To have your own home, I mean. We don’t have anything like this in New York. The apartment we just moved into is about as big as this room.”

Nonna sipped her coffee and nodded. “You have your own home. Here, in Ischia.”

“The building on Via Casciaro has twelve apartments,” Nonna said. “They were divided equally between my six children; each got two apartments. They drew straws as to who would get which. Your mother got one of the garden apartments and one on the top floor. You’re the youngest of her sons, so you get the one-bedroom. The one in the garden. It’s yours. Not today, but one day.”

“I bet it’s better than what we’re living in back home,” I said. “That was a nice thing for you to do. Not for me, I mean. For your family.”

“You are my family,” Nonna said.

She stood slowly and began to clear the table. I got up to help her, and she looked at me and shook her head. “I’ll take care of this,” she said. “Go in the back and get some rest. Later, when you wake up from your nap, you’ll go and meet the rest of your family. They’re all waiting to see you, especially the cousins your age.”

“How many cousins my age do I have?” I asked.

“On this island,” Nonna said, as she headed back into the kitchen, “more than you can count.”

A Memoir of Family 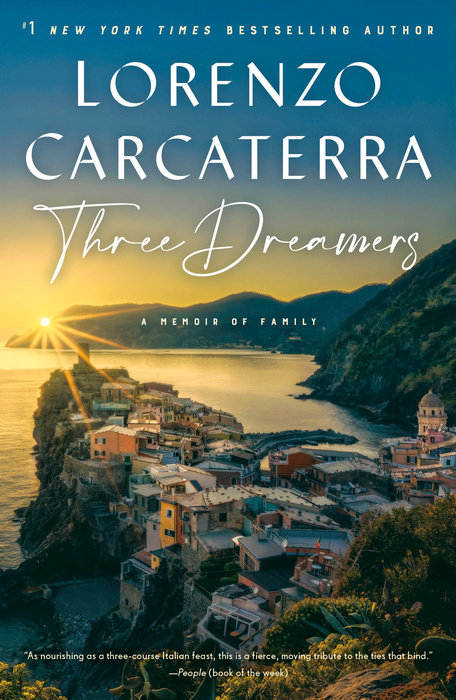