The Joy (& Weirdness) of Being a Late Bloomer

An honest, witty, and insightful memoir about what happens when your coming-of-age comes later than expected

“Thanks for Waiting is the loving, wise, cuttingly funny older sister we all need in book form.”—Tara Schuster, author of Buy Yourself the F*cking Lilies

Doree Shafrir spent much of her twenties and thirties feeling out of sync with her peers. She was an intern at twenty-nine and met her husband on Tinder in her late thirties, after many of her friends had already gotten married, started families, and entered couples’ counseling. After a long fertility struggle, she became a first-time mom at forty-one, joining Mommy & Me classes where most of the other moms were at least ten years younger. And while she was one of Gawker’s early hires and one of the first editors at BuzzFeed, she didn’t find professional fulfillment until she co-launched the successful self-care podcast Forever35—at forty.

Now, in her debut memoir, Shafrir explores the enormous pressures we feel, especially as women, to hit particular milestones at certain times and how we can redefine what it means to be a late bloomer. She writes about everything from dating to infertility, to how friendships evolve as you get older, to why being pregnant at forty-one is unexpectedly freeing—all with the goal of appreciating the lives we’ve lived so far and the lives we still hope to live.

Thanks for Waiting is about how achieving the milestones you thought were so important don’t always happen on the time line you imagined. In a world of 30 Under 30 lists, this book is a welcome reminder that it’s okay to live life at your own speed.

An excerpt from Thanks for Waiting

It was the beginning of June 2009, and maybe the only surprising thing about the layoffs was that they hadn’t happened sooner. The economy had tanked the previous fall, the United States was now officially in a recession, and The New York Observer, the newspaper where I’d worked for almost two years, was struggling. Its longtime editor, Peter Kaplan, had just quit, and the rumor was that he had chosen this moment to leave because he knew layoffs were imminent and he couldn’t bring himself to execute them.

The morning of the layoffs, I went into work with a creeping sense of dread. Peter’s replacement was his deputy, Tom, whom I didn’t have an especially close relationship with, and I worried that as he had made up the list of who would stay and who would go, I was on it.

What would I do if I got laid off? I was thirty-­two—­not old, certainly, but old enough that I was no longer a cheap hire. And besides, we were officially in the worst recession since the Great Depression. “They’re calling people into Peter’s old office,” I Gchatted my boyfriend, Jon. “I just don’t have a good feeling about this.”

“Whatever happens, we’ll figure it out,” he responded.

But I didn’t want to “figure it out.” I wanted to keep my job—­not just because getting fired in the middle of a recession is not exactly ideal, but also because getting hired at the Observer had been a dream come true. When I was in college in Philadelphia, I had become obsessed with the paper, an oversized, salmon-­colored weekly (Henry Rollins, perhaps apocryphally, had once called it “the curiously pink newspaper”) where Candace Bushnell had written the “Sex and the City” column that had become the TV show. The paper, written in a droll, knowing, literary style, portrayed an alluring New York of socialites and magazine editors and hedge funders. I wasn’t interested in actually being one of the people they wrote about—­I wanted to chronicle and interpret this world, as a kind of Harriet the Spy of exclusive New York.

I got to write about pretty much anything I wanted: profiles of intense and weird politicians like Anthony Weiner, columns about what it was like when your deadbeat boyfriend got his life together after you broke up, trend stories about nerds who were actually jocks. Since I was a kid growing up outside of Boston I’d always been enamored with New York—­for my fourteenth birthday, my mom and I drove to Manhattan and had lunch at the Rainbow Room in Rockefeller Center, which I thought was the height of sophistication; it felt like being literally on top of the world.

Now, thanks to my job, I had been given the keys to a New York world that felt exciting and exclusive, and, often, borderline absurd, like a party for a line of wine-­related clothing accessories hosted by 60 Minutes host Lesley Stahl (yes, this was an actual event that occurred). Most of my friends worked in media, too, and even though the scene could sometimes feel claustrophobic—­you did tend to see the same faces at the book parties and the dinners and the launch events—­it was also satisfying to feel like I had made it. But even outside of work, I just loved existing in the city. Everything was here, and I got to be a part of it.

I’d gotten the job a couple of summers earlier, when Peter, then the editor in chief, had emailed me to ask if I wanted to get coffee. At the time, I was working for the media gossip blog Gawker. Peter was a legend in New York media; it felt like I’d been summoned by the literary gods. He was known for hiring the best young reporters, writing the snappiest headlines, producing a must-­read paper each week on a shoestring budget. I was dying to work for him.

“So how are things going over there?” he had asked when we sat down at Friend of a Farmer, a café down the street from the Observer office. He was wearing his trademark tortoiseshell glasses and a loosened tie, and khakis. His hair was graying, but he had a full head of it. The overall effect was rumpled professor.

“Well, Choire is a genius,” I said, not really answering the question. Choire was Choire Sicha, the editor in chief of Gawker, who had left the Observer to take the Gawker job; he had previously left an earlier stint at Gawker to take the job at the Observer. He and Peter were still close. It was all very incestuous. Was Peter trying to get back at Choire for leaving by hiring me? And if he was, did it matter? I liked working for Choire, but I didn’t feel any particular loyalty to Gawker, which was a notoriously difficult place to work, and after less than a year there I was already feeling burned-­out. Still, I was mindful of performing the delicate dance of signaling my interest in a job, while not trashing my current employer, while also not wanting to appear desperate.

“Well, listen,” Peter said, after we’d sipped our coffees and chatted for half an hour or so. “You’ve been doing terrific stuff with Choire. But—­I think you should come to the Observer.”

I tried to keep my face looking pleased but not overly excited. “What kind of job are you thinking?”

“I’d put you on the ‘Ideas’ beat,” he said. “Literary stuff, academia, the intellectual scene in New York. You’d have a lot of freedom. Think about it, okay?”

“I will,” I said. “Before we go, I do have a question—­I know most of the reporters are, like, twenty-­four. I don’t mean to put this indelicately, but can you afford me?”

Although I wasn’t making a ton of money at Gawker, I was making more than twenty-­two thousand dollars a year, which was what I had heard was the starting salary for Observer reporters. There was no way I’d be able to survive on that in New York—­I didn’t have a trust fund or family help, and I couldn’t stomach the idea of going back to live in a crappy apartment with multiple roommates just to take this job.

Peter seemed embarrassed at the mere mention of money. “I think I can work it out, yes,” he said.

I started a couple of months later. I was one of the older reporters in the bullpen, but it felt like I was finally where I was supposed to be.

And then, in the fall of 2008, after I’d been at the paper for a little over a year, the economy crashed. The papers ran photo after photo of shell-­shocked Lehman Brothers analysts leaving their offices with their company gym bags after they had learned the company would be shutting down. At first, it felt surreal: Surely the whole economy wasn’t crashing? At the paper, we published a piece about “Crash Virgins,” aka people who had never been through an economic crash before. But clearly, the economic crisis was running much deeper than just being a cute trend story. We just didn’t yet know how deep, or how our lives would change.

The owner of the paper, Jared Kushner, the son of a disgraced New Jersey real estate magnate, long had been an infrequent but anxiety-­producing visitor at work. But now he seemed to be showing up more often, wandering around the office and stressing everyone out, especially Peter. By January, the parties dried up, even more so than the usual post-­holiday-­party slump. Things at the paper were also getting more dire financially. Advertising was way down, and the shoestring budget that we’d been operating on got even more shoestring. I was now editing the paper’s social column, “The Transom,” but the paper’s freelance and expenses budgets were slashed. I had to make the case for why my one remaining reporter should be reimbursed for the cabs she took home late at night from covering the few parties that were still happening. Still, even now, months into the crash, I wasn’t overly concerned; the Observer had always operated on a shoestring budget, and I was confident that this, too, would pass.

But it didn’t. And then Peter announced he was leaving, and there was a big farewell party at Elaine’s, the Upper East Side bar and restaurant that had been a longtime gathering spot of a certain milieu of literary New York; it was festive but melancholy. The next day, people started getting called in to Tom’s office.

Doree Shafrir is the author of the novel Startup and the cohost of the podcasts Forever35 and Matt & Doree’s Eggcellent Adventure. She lives in Los Angeles with her family.

The Joy (& Weirdness) of Being a Late Bloomer 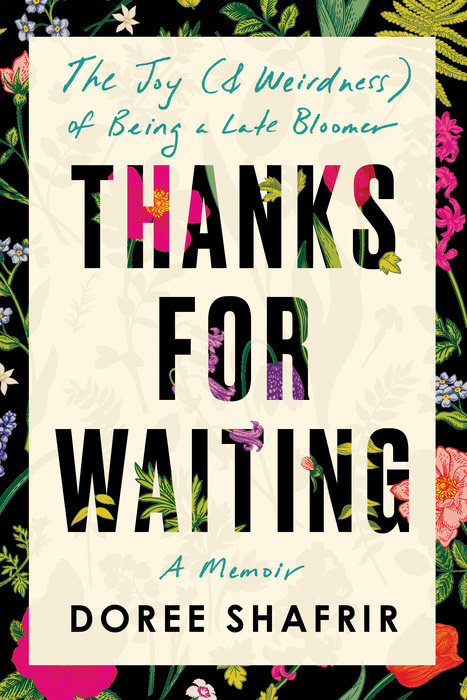