Maggie Hope is off to California to solve a crime that hits too close to home—and to confront the very evil she thought she had left behind in Europe—as the acclaimed World War II mystery series from New York Times bestselling author Susan Elia MacNeal continues.

NAMED ONE OF THE BEST BOOKS OF THE YEAR BY MILWAUKEE JOURNAL SENTINEL • “A swift, vibrant novel that peels back the asbestos curtain on the complex history of Los Angeles, home to heroes and villains.”—Steph Cha, author of Your House Will Pay

Los Angeles, 1943. As the Allies beat back the Nazis in the Mediterranean and the United States military slowly closes in on Tokyo, Walt Disney cranks out wartime propaganda and the Cocoanut Grove is alive with jazz and swing every night. But behind this sunny façade lies a darker reality. Up in the lush foothills of Hollywood, a woman floats lifeless in the pool of one of California’s trendiest hotels.

When American-born secret agent and British spy Maggie Hope learns that this woman was engaged to her former fiancée, John Sterling, and that he suspects her death was no accident, intuition tells her he’s right. Leaving London under siege is a lot to ask—but John was once the love of Maggie’s life . . . and she can’t say no.

Maggie struggles with seeing her lost love again, but more shocking is the realization that her country is as divided and convulsed with hatred as Europe. The Zoot Suit Riots loom large in Los Angeles, and the Ku Klux Klan casts a long shadow everywhere. But there is little time to dwell on memories once she starts digging into the case. As she traces a web of deception from the infamous Garden of Allah to the iconic Carthay Circle Theater, she discovers things aren’t always the way things appear in the movies—and the political situation in America is more complicated, and dangerous, than the newsreels would have them all believe.

An excerpt from The Hollywood Spy

“I have a feeling,” Maggie Hope murmured, stepping into the golden light, “we’re not in London anymore.”

Her hair glinted copper in the sun; she was already dressed for the day in a blue-flowered shirtdress and wedge-heeled espadrilles. Maggie looked over the balcony rail, down to the street below. Most of the early morning mist had burned off by now and the air was pure and jasmine-scented, the sky above neon turquoise. A fuzzy bumblebee drifted over a stone planter, settling on a large red rose. Across the street loomed a billboard that read: “UNITED we are strong, UNITED we win” with all the flags of the Allied nations. Next to it stood a poster for the new Walt Disney film Victory Through Air Power. Two klieg lights converged to form the giant V in Victory, illuminating silhouettes of Allied planes with the slogan: There’s a thrill in the air.

Maggie surveyed the surrounding neighborhood; she had arrived late the night before and hadn’t been able to get a good view. West Hollywood was a mishmash of architectural styles—a Moorish minaret sprouted from a Swiss chalet, while a Tudor mansion overlooked a row of Georgian-style shops. Next door was a Spanish Colonial liquor store, a bar built to look like a log cabin, and a coffee shop with a gigantic coffee cup attached to the roof.

Across Sunset Boulevard, a group of men in black masks caught her eye. They were chasing a blond woman in a white dress and heels down the sidewalk. One pulled out a gun and shot—the woman froze before crumpling to the pavement.

My God, Maggie thought, as blood began to blossom through the fabric.

While she stared in horror, a short man entered her field of vision, waving his arms and yelling, “Cut! Cut!” He was portly, with a handlebar mustache and a megaphone. As he walked to the woman, she sat up and grimaced, pushing hair out of her eyes. He extended a hand to help her up and she took it, now laughing. It’s just a movie shoot, Maggie realized. She let her hands unclench from the fists she had made.

Relieved, Maggie took in the vista of Los Angeles’s downtown in the distance. The wind stirred the glossy fronds of the palm and pepper trees, and a goldfinch sang from one of the branches. Maggie looked up and squinted as she caught sight of a hawk circling above her, dark against the hot, bright sky.

Maggie raised her arms and stretched, taking in the sunshine. In Los Angeles, in the light and the heat, she felt reborn—like Dorothy in a Technicolor Oz, literally worlds away from her life in gray, dreary war-torn London. Even her memories of England seemed filmed in black-and-white.

As the cast and crew reset the cameras, she went back to her wrought-iron chair in the shade and picked up her freshly ironed copy of the Los Angeles Times: u.s. subs torpedo 14 jap ships, sink 10 shouted the headline. Reds Hold Nazis in Vital Kursk Areas. US Forces Closing in on Munda Base.

She settled in to read. Attempts by the Axis to win quickly, before the United States could muster superior resources, had failed; the Nazis’ hopes for a short war shattered. The Allied campaign to win the war, demanding the Axis’s unconditional surrender, was now well under way as the British and Americans continued to bomb German cities and sink Nazi ships and submarines. They’d made great headway in the Middle East and Mediterranean through the spring, and an invasion of Sicily seemed imminent.

In the Pacific, the U.S. military was making inroads to the outlying Japanese-controlled islands, slowly but surely inching closer to Tokyo. But while the Allies could now see the possibility, even probability, of eventual victory, there were still no guarantees, except for the continuation of a long, hard, and bloody war.

Same war, but such a different country, Maggie thought as she lifted her eyes to the shimmering horizon. The city seemed as much a mirage in the desert as a city, an idea of a place, suspended between fantasy and reality. There was still an innocence in the United States, an innocence from never having had the mainland of one’s country attacked. At least, not yet. As a yellow butterfly flitted by, Maggie tucked one leg covered in tan makeup behind the other, grateful for the awning’s shade as the sun rose and grew hotter.

Maggie and Sarah Sanderson, her friend and a ballet dancer, were staying at the Chateau Marmont, a hotel on Sunset Boulevard in Hollywood. Like the castle in Walt Disney’s Snow White, the Chateau had slate-gray gables, Gothic archways, and a dominating turret. It perched atop a hill on the northern side of Sunset, one of Los Angeles’s busiest and most famous streets.

Their accommodations were courtesy of Lincoln Kirstein, an American scholar, philanthropist, and balletomane. He had first seen Sarah dance with the Vic-Wells Ballet London, while he had been working for General George S. Patton. He recommended her to the choreographer George Balanchine for a film—and perhaps as a dancer for his eventual company.

Sarah stepped out onto the balcony, her dark hair pulled back in a ponytail, dressed in a silk blouse and linen trousers, carrying a pair of brand-new pink pointe shoes. She had already been in L.A. on her own for a few weeks. Since landing a feature role in Star-Spangled Canteen, a new movie produced by the Gold Brothers Studios, choreographed by Balanchine, she had been putting in long days of rehearsal. Now, she stood barefoot on the balcony, looking every inch the fresh Hollywood ingenue. “Good morning, kitten.”

Maggie looked up and smiled. “Sarah! How are you?”

“Puffy and miserable” was Sarah’s reply in her low, smoky voice. “I have cramps and the timing couldn’t be worse.” There were just three days until her performance would be captured for eternity on celluloid.

“Thank you, but the camera adds a stone, they say.” Sarah had confided in Maggie that her introduction to Hollywood had been rough. Already slim and beautiful, Sarah had been told by the producers to get her nose straightened, her breasts padded, her teeth fixed and bleached, and to lose even more weight. She’d compromised on having her teeth capped—but that was it. She crouched and began slamming one of the pale pink slippers against the balcony’s concrete floor.

Maggie turned to look. “Poor shoe, what did it ever do to deserve this fate?”

“One’s nice and quiet—and one’s decidedly not,” Sarah grumbled in her Liverpudlian accent. She slipped the satin shoe on one blistered, callused foot to test it, rising on pointe in a move that seemed to defy gravity. “Today’s my first time working one-on-one with Mr. Balanchine. And I want my shoes to be perfect. Meaning silent. And I’ll beat the bloody things into submission until they are.” She looked up, slipper in hand. “Today’s the big day for you, too, isn’t it?”

Maggie swallowed. “If by ‘big day’ you mean I’m meeting with John—to discuss the case—then yes. But I wouldn’t call it a ‘big day.’ ”

Except it is, she had to admit. Maggie hadn’t seen or spoken to John for over two years. They’d met when he’d been working as Winston Churchill’s private secretary, the most staid of an already traditionalist set of recent Oxbridge graduates. She’d been a typist. They had, for a brief moment, been engaged. While they’d made up and exchanged letters—cheery, breezy missives, often with drawings and cartoons in the margins—there had been no real information or emotion exchanged between them since their parting in Washington, D.C., after the Churchill-Roosevelt conference in 1941, just after Pearl Harbor.

Their mutual friend David Greene had kept both of them connected and up-to-date on each other’s adventures—or at least what wasn’t covered by the Official Secrets Act. It was through David that Maggie had learned first of John’s engagement to Gloria Hutton—and then of Gloria’s sudden death, followed by John’s hope that she would come to investigate his fiancée’s possible murder. A chill passed across her back despite the warmth of the sun.

“I still can’t get over the palm trees,” Maggie said. “I can hardly believe they’re real, let alone how they stand upright. It’s like they consider physics optional.”

“But you’re American! At least you were born and raised here.”

“In Boston. And let me assure you, there are no palm trees in Massachusetts.”

“Palm trees have no business being this tall,” Sarah muttered as she continued to pound her shoe. “It’s unseemly.”

“I’m so glad we can be here in Los Angeles together,” Sarah said. “Although I’m sorry for the grim circumstance.”

“Well, we can’t all be movie stars,” Maggie said lightly.

“Still, it must be such a comfort to John to have you here while he’s grieving Gloria. Do you really think she was murdered?”

“I don’t know,” Maggie admitted. “From what I’ve read, there seems to be no evidence of foul play. But I’ll do everything I can to find out what really happened.” 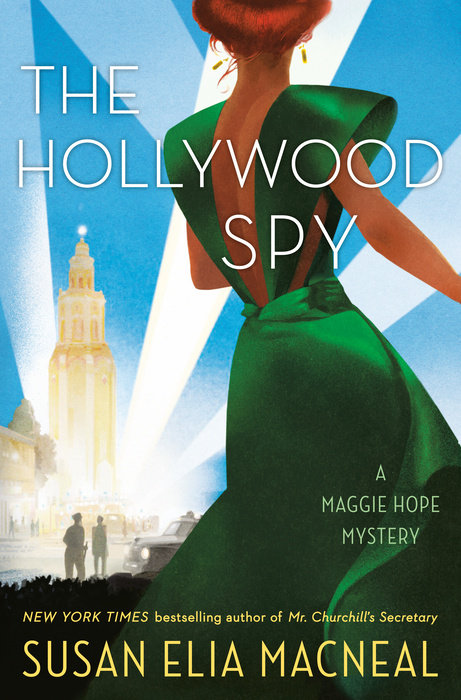