9 Rules for Humans in the Age of Automation

“While we need to rewrite the rules of the twenty-first-century economy, Kevin’s book is a great look at how people can do this on a personal level to always put humanity first.”—Andrew Yang

With a new afterword by the author

You are being automated.

After decades of hype and sci-fi fantasies, artificial intelligence is leaping out of research labs and into the center of our lives. Automation doesn’t just threaten our jobs. It shapes our entire human experience, with AI and algorithms influencing the TV shows we watch, the music we listen to, the beliefs we hold, and the relationships we form.

And while the age-old debate over whether automation will destroy jobs rages on, an even more important question is being ignored:

How can we be happy, successful humans in a world that is increasingly built by and for machines?

In Futureproof: 9 Rules for Humans in the Age of Automation, New York Times technology columnist Kevin Roose lays out a hopeful, pragmatic vision for how we can thrive in the age of AI and automation. He shares the secrets of people and organizations that have survived previous waves of technological change, and explains what skills are necessary to stay ahead of today’s intelligent machines, with lessons like

Roose rejects the conventional wisdom that in order to succeed in the AI age, we have to become more like machines ourselves—hyper-efficient, data-driven workhorses. Instead, he says, we should focus on being more human, and doing the kinds of creative, inspiring, and meaningful things even the most advanced robots can’t do.

An excerpt from Futureproof

Recently, I was at a party in San Francisco when a man approached me and introduced himself as the founder of a small AI start-up. As soon as the founder figured out that I was a technology writer for The New York Times, he launched into a pitch for his company, which he said was trying to revolutionize the manufacturing sector using a new AI technique called “deep reinforcement learning.” Modern factories, he explained, were struggling with what is called “production planning”—the complex art of calculating which machines should be making which things on which days. Today, he said, most factories employ humans to look at thick piles of data and customer orders to figure out whether the plastic-molding machines should be making X-Men figurines on Tuesdays and TV remotes on Thursdays, or vice versa. It’s one of those dull-but-essential tasks without which modern capitalism would probably grind to a halt, and companies spend billions of dollars a year trying to get it right. The founder explained that his company’s AI could run millions of virtual simulations for any given factory, eventually arriving at the exact sequence of processes that would allow it to produce goods most efficiently. This AI, he said, would allow factories to replace entire teams of human production planners, along with most of the outdated software those people relied on. “We call it the Boomer Remover,” he said. “The . . . Boomer . . . Remover?” I asked. “Yeah,” he said. “I mean, that’s not the official name. But our clients have way too many old, overpaid middle-managers who aren’t really necessary anymore. Our platform lets them replace those people.” The founder, who appeared to be a few drinks deep, then told a story about a client who had been looking for a way to get rid of one particular production planner for years, but could never figure out how to fully automate his job away. But mere days after installing his company’s software, the client had been able to eliminate the planner’s position with no loss of efficiency. Slightly stunned, I asked the founder if he knew what had happened to the production planner. Was he reassigned within the company? Was he just laid off unceremoniously? Did he know that his bosses had been scheming to replace him with a robot? The founder chuckled. “That’s not my problem,” he said, and headed to the bar for another drink.

Kevin Roose is a technology columnist for The New York Times. He is the host of the Rabbit Hole podcast and a regular guest on The Daily. He writes and speaks frequently about topics including automation and AI, social media, disinformation and cybersecurity, and digital wellness. Previously, he was a writer at New York magazine and the co–executive producer of Real Future, a documentary TV series about technology. He is the New York Times bestselling author of two previous books, Young Money and The Unlikely Disciple. He lives in Oakland, California.

9 Rules for Humans in the Age of Automation 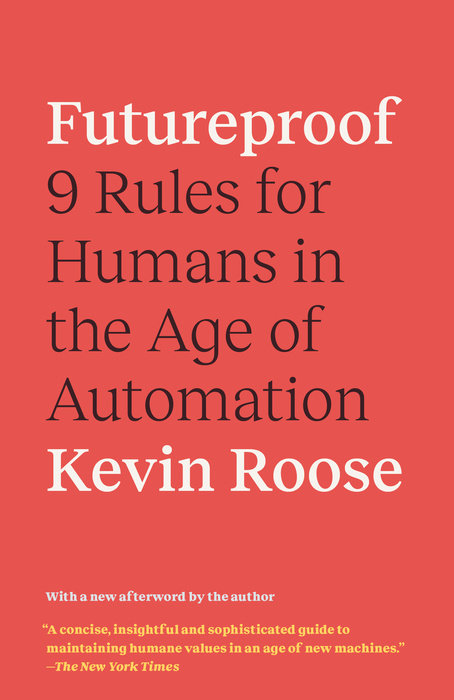