“A stirring standalone thriller . . . Susan Elia MacNeal’s page-turning prose is as entertaining as ever—I was riveted from beginning to end.”—Kate Quinn, author of The Alice Network

June 1940. France has fallen to the Nazis, and Britain may be next—but to many Americans, the war is something happening “over there.” Veronica Grace has just graduated from college; she and her mother, Violet, are looking for a fresh start in sunny Los Angeles. After a blunder cost her a prestigious career opportunity in New York, Veronica is relieved to take a typing job in L.A.—only to realize that she’s working for one of the area’s most vicious propagandists.

Overnight, Veronica is exposed to the dark underbelly of her new home, where German Nazis are recruiting Americans for their devastating campaign. After the FBI dismisses the Graces’ concerns, Veronica and Violet decide to call on an old friend, who introduces them to L.A.’s anti-Nazi spymaster.

At once, the women go undercover to gather enough information about the California Reich to take to the authorities. But as the news of Pearl Harbor ripples through the United States, and President Roosevelt declares war, the Grace women realize that the plots they’re investigating are far more sinister than they feared—and even a single misstep could cost them everything.

Inspired by the real mother-daughter spy duo who foiled Nazi plots in Los Angeles during WWII, Mother Daughter Traitor Spy is a powerful portrait of family, duty, and deception that raises timeless questions about America—and what it means to have courage in the face of terror.


“And now, may I introduce to you our very own Lois Lane, the intrepid editor of the award-winning Hunter Envoy, and the winner of the prestigious National Pacemaker Award for excellence in American student journalism: Veronica Grace!”

A wave of warm applause flowed through the audience in the majestic cream-and-gold auditorium of Carnegie Hall as Veronica stepped onto the stage. She was tall for a woman and slim, with pale blond waves of hair, intelligent deep blue eyes, a strong nose, and a pointed chin. As she approached the podium in her purple cap and gown, she wobbled on her new high heels, stumbled, and nearly fell. “Watch yourself, Miss Grace!” Hunter College’s president called.

Veronica laughed, a full-bellied guffaw, righted herself, and shook his hand. Emotions—pride, embarrassment, amusement, and stoicism—played across her face. “Thank you, sir,” she said, flashing a grin. Then, in an aside to the audience in an exaggerated Brooklyn accent, “Good thing I’m gonna be a journalist, not a ballerina, right?”

The members of the audience chuckled as they fanned themselves with their paper programs. The day was hot and humid, with rain in the forecast; inside the auditorium, it was warm and sticky. Veronica took a moment to search the audience for her mother, who she knew would be sitting in the middle of the orchestra section, wearing a green-and-gold straw hat festooned with yellow poppies. Found her, she thought, seeing the beloved face, so like her own. The two women’s eyes met, and they nodded, recognizing the enormity of the moment.

Veronica again addressed the crowd: “Thank you, distinguished faculty, ladies and gentlemen, and my fellow graduates,” she began in a low voice, surprisingly husky from a childhood illness. She looked to her classmates, in their purple caps and gowns, sitting in the first three rows. “Well, girls--we did it!”

There was a rousing cheer from the assembled graduates.

“We’re now graduates of Hunter College, the inheritors of a radical idea: that educating women can change, well, everything. And education for all women, not just the daughters of the elite. Yes, we may have a couple of those . . .” She pointed to a tall young woman in the front row. “Priss, we see you!”

Priss waved back good-naturedly, and the audience laughed.

“But most of us standing before you today are the daughters of immigrants, of factory workers, of former slaves. We’re the strivers and the seekers. Many of us are the first generation in our families to graduate from college. And our success is a testament to the persistence and power of the American dream. Of democracy.”

How I love this country, Veronica thought, catching sight of the American flag on the podium. This glorious beacon of hope and ­promise.

Every woman in the class of 1940 was following her dreams: Veronica’s best friend and co-editor of the Envoy was going to be student-teaching at the Little Red Schoolhouse while earning her degree from Teachers College. The star of all the school’s plays was headed to the Bellevue School of Nursing, focusing on a new specialty: postpartum care for mothers. A leggy alto who also tap-danced was joining the chorus of Pal Joey on Broadway. And the class valedictorian would be studying child welfare at the newly opened Columbia University School of Social Work.

There was more applause as Veronica looked out over the crowd. “And we’ll need strong shoulders. France has fallen to the Nazis, and the battle for Britain will begin soon. The war’s getting closer to the U.S. every day. It’s easy to think what happened in France could never happen here. But let’s not forget: on February twentieth last year, our own Madison Square Garden was filled with twenty thousand chanting, stomping, shouting Americans rallying in support of Nazi Germany.” Veronica hadn’t just read about it; she’d been there in person. She’d gone undercover at the rally to research her prize-winning story about the rise of Nazism in New York City for the Hunter Envoy.

She swallowed, remembering. “That’s right—twenty thousand Nazis and Nazi sympathizers. Right here, in the heart of New York City. It’s a warning America’s not immune from the authoritarianism running rampant across Europe. And it’s a call to arms to those who believe the United States is the last, best hope for freedom and democracy.

“What gives me joy and courage is how furious the Nazis would be to see all of us here today.” She met the gazes of her fellow graduates. “Colored, Asian, and white. Jewish and Gentile. All social classes. This incredible, diverse, brilliant class of 1940 stands tall and proud, even during this challenging year.” She smiled. “And that, my friends, is the real America!”

There was more applause and even a few cheers.

“Our Hunter motto is ‘The care of the future is mine,’ ” she said, wrapping things up. “So, let’s take it as our charge—it’s up to all of us.” She grinned. “Hunter class of 1940, congratulations—and good luck to us all!”

Still beaming, Veronica took her seat alongside the rest of her class as the ceremony ended with a rendition of “America the Beautiful,” a benediction from the rabbi, and, finally, the recessional to Edward Elgar’s “Pomp and Circumstance.”

As the last notes of music faded and the crowd dispersed, Veronica hung back with Izzy Horowitz, her co-editor. The two had worked together for four years on the Envoy, with deadlines, late nights, strong coffee, and all the stress and pride of seeing each new issue printed. Veronica adjusted Izzy’s cap and fixed her friend’s hair. “I can’t believe this is it,” she said.

“I’m just so glad we’re both staying in New York,” Izzy replied. Although many of their friends were content to listen to Frank Sinatra and read the comics, Veronica and Izzy—who read every newspaper their school library carried, especially Drew Pearson’s syndicated column “Washington Merry-Go-Round”—knew things were bleak, the world was growing darker each day. There was a sense of bated breath as Europe’s leaders, like chess players, plotted their next moves.

Veronica’s face darkened. “If people don’t wake up, we’re all going to be goose-stepping a year or two from now.”

Another of the graduates, wearing pearl earrings and an orchid corsage, rolled her eyes. “Oh, here she goes again—Veronica Grace and her ‘Nazis are evil’ schtick.”

“They are—just ask the folks in France. Or maybe you haven’t heard the latest?”

“I have, and the Germans have promised to be respectful in France. Pétain’s in charge now, in Vichy. It’ll all be fine.”

“But the worst keeps happening.” Veronica tried not to roll her eyes. Germany was protected by its alliance with Russia to the east and by a neutral America to the west. The Nazis had marched across Holland at lightning speed and taken Belgium, Holland, and Luxembourg easily. France had fallen in six weeks. Now the Luft­schlacht um England, the air invasion of England, was about to begin.

But why aren’t they angry? Veronica bit her lip. A madman’s conquering the world, and no one can be bothered. When the fight comes, you need to fight back, not back down like the British fool calling for “peace for our time.”

She took a deep breath and remembered what her late father used to say: Illegitimi non carborundum—don’t let the bastards get you down. 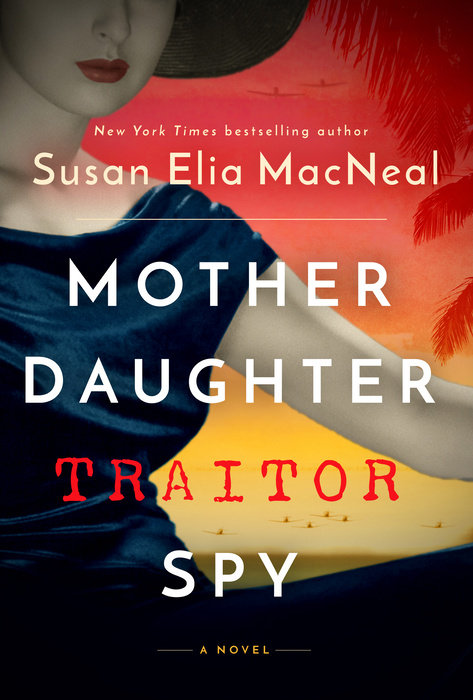