NEW YORK TIMES BESTSELLER • The hosts of the popular podcast and E! show LadyGang offer a relatable, empowering, and hilarious take on being unapologetically yourself (even if that's not always your best self) in a manifesto that redefines womanhood for the twenty-first-century lady.

If you're tired of being bombarded with the curated perfection on social media and you're starving for something raw, honest, and a little bit messy, welcome to the LadyGang. Keltie, Becca, and Jac are here to clear away the bullshit and give you the confidence to live your best lady life.

Unabashedly sincere, clever, and full of questionable advice, Act Like a Lady explores the complexities surrounding topics like body image, breakups, navigating a career, and adult friendships through their own embarrassing experiences. The LadyGang has your back with essays like "Maybe She's Born with It, Maybe It's Photoshop" and "If You're Happy and You Know It, Thank Your Ex." You'll learn there's a million different ways to be a lady--and that includes accidentally farting during sex or having the guts to tell your friend she's being a selfish assh*le. No matter what you're going through, you'll find a space to bond over the sloppy, heartbreaking, joyous, and often ridiculous realities of womanhood. Nothing is TMI here.

Wanna Hang with the Gang?

Um, excuse us? Are you standing in a bookstore with a mediocre latte in hand asking yourself Am I That Bitch? and/or Do I need a book that speaks to me on a personal level?

Have you ever accidentally farted during sex?

Have you ever left a tampon in for way too long and lived to tell the tale?

Have you ever ugly-cried rom-com–style in the bathroom at work during your lunch break?

We started the LadyGang with a simple mission statement: to make women to feel less alone. The three of us were individually fed up with the hyper-curated, bullshit-filled world around us. We were starving for something honest, raw, relatable, and a little messy . . . like women actually are. You know when you’re sitting around with your girlfriends, sharing your darkest, dirtiest, funniest, most cringeworthy stories, when one of you shouts with a mouthful of tequila and guac, “OMG! We should start a podcast!”? Well, that’s basically the idea behind the LadyGang.

Things started off remarkably smooth. Jac made a logo, Keltie created a layout for the show, and Becca called in ten favors with a smidge of blackmail from celebrity friends to come on as our first guests. But don’t get us wrong, we’ve definitely f***ed up along the way. Since our podcast launched in December of 2015, we’ve accidentally erased entire recordings, been in a legal battle that almost cost us all our savings, and unsuccessfully asked John Mayer to come on our show twenty-seven times. (FYI, this officially counts as twenty-eight, John . . . hello???) But with lots of hard work and some tough love with one another, the LadyGang has grown into quite the juggernaut. We have employees, a subscription beauty box, a merchandise store, a podcast network, a touring business, and a TV show! This is our first rodeo, and we’re constantly looking at each other thinking, How the f*** have we not been bucked off and kicked in the head yet?!

The truth is, the magic happens when the three of us sit in a room and just . . . talk. Much like the show Teen Mom, it was something we never planned for and definitely never expected. We all ran in a similar Los Angeles circle but were acquaintances at best and couldn’t be more different personality-wise. Keltie is the type-A workaholic whose idea of a good time is an afternoon at Home Depot preparing to DIY shiplap her own bathroom. Jac is the adventurous free spirit, an all-around “goodtime girl” who has never met a dartboard, cornhole, or Jenga game she didn’t like. And Becca is the cynical, blunt, and usually the most offensive cherry on top. Becca and Keltie had known each other while they were both professional dancers in New York City, and their paths continued to cross again and again. Becca accidentally became a pseudo-star on the hit TV show Glee and was interviewed by none other than Keltie on the Hollywood red carpet. Jac and Keltie share a mutual ex-boyfriend, and Jac will constantly remind everyone (and we mean EVERYONE) how Keltie “took her sloppy seconds.” But the driving force that brought us together was that all three of us felt stagnant in our careers. Our day jobs were not fulfilling us, not inspiring us, and, quite frankly, we were sick of working for the man.

And so the LadyGang was conceived.

Well, not quite. Before checking the trademark registry, we started the podcast with a different name. (Yes, that’s a thing. First piece of advice: don’t name a business without checking if someone else owns said business name.) We refuse to say the original name out loud now . . . it’s kind of like Voldemort. And after we made custom jackets, did a photo shoot, and launched the show, it became clear that even if we were to pool all our savings together, we would never be able to afford to purchase a trademark someone else owned. Speed bump number one: find a new name.

And so like a phoenix rising from the ashes, the LadyGang was born, again.

What started as a celebrity-driven podcast quickly turned inward to the three of us. Within the first few episodes, Becca admitted she dropped her dirty underwear, complete with a “snail trail” (use your imagination), in the parking garage to later be retrieved by her new boyfriend, now husband. And in that moment, Pandora’s box was ripped wide open. Nothing was too crude, gross, smelly, or inappropriate for our podcast. Our listeners thrived on our embarrassing stories about stumbling through womanhood, and seemingly overnight we had a worldwide gang of devoted ladies who celebrated our good weeks (like when Jac had a sandwich named after her) and cry-laughed at our bad weeks (like when Keltie was mistaken for Steven Tyler).

Since our show launched, we’ve had millions and millions of downloads, been nominated and lost both a Webby Award and a People’s Choice Award (which is great because losing is more on-brand for us). We’ve been featured in fancy magazines, walked red carpets, and even drank wine with Kathie Lee and Hoda on the Today show. We worked our asses off to make the podcast so radical that the E! network took notice and gave us our own TV show. We were “executive producers,” so not only did we have an important say in how our show was made, but we were also able to hire a staff full of radiant and smart women to produce us, film us, and reach down our shirts to mic us.

Although we would never agree on who has been our favorite celebrity guest on the show (Keltie says Ed Sheeran, RuPaul, and Jenna Fischer. Becca says Dorit Kemsley, Ryan Murphy, and Lea Michele. Jac says Nico Tortorella, Karamo Brown, and her mom), we all agree that the very best thing about starting the LadyGang has been meeting all our listeners out in the real world. Ladies stop us at concerts, on the street, and at drugstores while we are buying tampons, and we are constantly in awe of how f***ing awesome they are.

The LadyGang has become a community full of smart, accomplished, hardworking, caring, stylish, badass women who have their shit together but might also happen to be wallowing over a bad job, a bad breakup, or a bad spray tan. Maybe your guy does the dishes but won’t go down on you; maybe you just spent $2k to be in a wedding for someone you don’t even like; or maybe your parents, friends, ovaries, or boss are acting like f***ing jerks, and you just need somewhere to vent. The LadyGang has got your back.

This is “technically” an advice book, but we are well aware that we give pretty questionable advice. We hope that by being honest about our struggles, insecurities, breakups, divorces, leaked nude photos, and plastic surgery we can rip the veil off the bullshit that the world is currently selling you. Our mission is to help you feel more normal. You are not the only one who feels as if they have no idea what they are doing. When a f***ening is on the horizon, whether it be in a relationship, at work, or with a shitty friend, it’s really easy to feel like no one else has ever experienced the crushing pain you’re currently going through. But, in reality, everyone has gone through all of this shit and then some. We’ve all been full Natalie Imbruglia in the fetal position crying and lying naked on the floor, and all we ever needed was someone to talk to. If we didn’t have our ladies to lean on, womanhood would be completely unbearable.

For so long, it has felt like a woman’s success has been defined by whether or not she could achieve the “happily ever after” fairy tale. We have been sold this image of happiness as riding off into the sunset with a handsome prince, or living with a white picket fence, or having a dozen kids. Our value has been based far too much on things outside of us, and, frankly, we’re sick of it. Women are dynamic and real and messy and smart, and we have so much more to offer than society’s bunk-ass expectations of us. And don’t worry, we don’t hate men. We actually love them to death, but we also love our careers, our friends, sex, and, most important, we love ourselves (well, we’re trying to, at least). 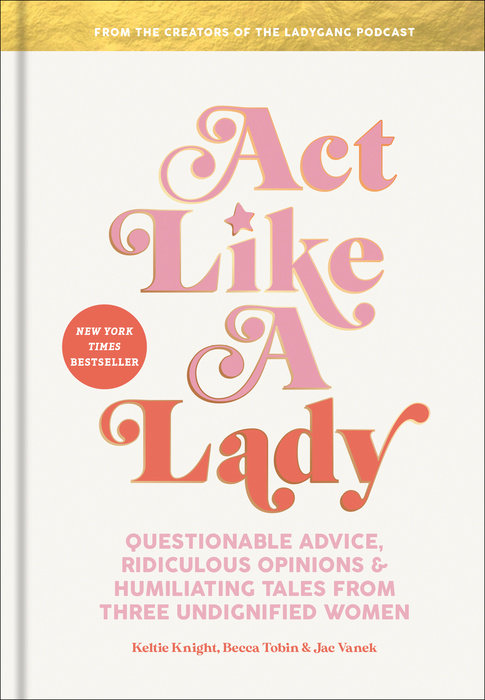