From riffs on classics such as the Mezcal Mule and Oaxaca Old-Fashioned to new favorites such as Naked and Famous or Smoke and Ice, discover how to use mezcal and tequila to create cocktails in nearly every classic cocktail formula—from flip to sour to highball—that highlight the smoky, edgy flavors of these unique and popular spirits.

Robert Simonson, author of The Old-Fashioned and The Martini Cocktail, covers a broad range of flavors with doable, delicious recipes that are easy to assemble, most only requiring three or four ingredients. This comprehensive, straightforward guide is perfect for tequila and mezcal enthusiasts looking for creative ways to enjoy agave spirits more often and in more varied ways—or for anyone who just likes to drink the stuff.

An excerpt from Mezcal and Tequila Cocktails

Fifteen years ago, a book called “Mezcal and Tequila Cocktails” wouldn’t have been published. Oh, “Tequila Cocktails” might have seen the light of day. But even that would have been a stretch once you got past the few widely known and consumed drinks, such as the marga­rita, paloma, and tequila sunrise. And then there would have been the question as to whether anyone would buy it. After all, for much of the twentieth century, tequila was known more for shots than mixing. You didn’t savor it; you threw it back.

As for mezcal cocktails, well, there were none to speak of. Hell, in the United States market, there was almost no mezcal. And what mezcal there was—that forbidding bottle with the worm in it—wasn’t very good and was little understood by the bartenders who poured it and the few drinkers who ordered it. If tequila was a dare you took up in a bar, and regretted the morning after, mezcal was a double­dog dare, a journey into the truly unknown.

Tequila’s and mezcal’s reputations today could not be more different. The spirits have enjoyed a complete turnaround in both status and popularity. In the 1920s, when Prohibition was in effect, Americans began traveling south of the border to drink agave spirits because they couldn’t lay their hands on anything alcoholic at home. Today, Americans drink them out of preference. Consumers’ eyes have been opened to the spirits’ historical and artisanal heritage, and that they are the products of centuries of tradition and craftsmanship. Their newly elevated status reflects the endless agricultural variety of the hearty agave plant, from which both tequila and mezcal are derived, and their terroir, not to mention the inimitable touch of the tequileros and mezcaleros who create the liquors, many of whom are following family practices that go back generations. The distillates have finally joined other spirits commonly labeled with adjectives such as “ele­gant,” “complex,” and—that favorite term of marketers—“premium.” In short, agave spirits have gone from shots to sipping; from the kind of hooch that Hollywood actors drink in disreputable cantinas in B pictures to the kind that Hollywood actors invest in and get rich off, in some cases making more money than they do from acting.

It’s a Cinderella story unlike any in the drinks world, in which an age­-old spirit has finally been recognized for the liquor royalty it always was. And, as with most spirits and cocktails that have gone from zero to sixty in popular favor these days, we can thank our ever­curious neighborhood mixologists for the change in public perception, as well as the journalists who cover their every move. Once the new breed of conscientious young bartenders were done blowing the dust off neglected spirits, like gin and rye and all sorts of underappreciated liqueurs and bitters, they turned their attentions to agave­based spirits. They wondered if tequila and mezcal maybe deserved to inhabit a better world of drinking, one that wasn’t so reliant on lime wedges and salt and late-­night bad decisions.

One of the first wonderers may have been Julio Bermejo. Bermejo is a San Franciscan whose dreams of a career in the diplo­matic corps didn’t pan out. Instead, in the 1980s, he found himself trapped behind the bar at his family’s business, Tommy’s Mexican Restaurant. There was a house margarita at Tommy’s, just as there was at every Mexican restaurant. And, like the ones at most of those other places, it wasn’t very good. Julio, making the best of his situa­tion, decided to invent a better margarita. His first move was to get rid of the “mixto” tequila (a mix of agave spirit and neutral grain spirit) and use better-­quality tequila made from 100 percent agave spirit. His second fix was to eighty­-six the chemically laced sour mix and use freshly squeezed lime juice in its place. The final step was the most radical: Bermejo removed the traditional curaçao from the recipe—the orange liqueur that technically made a margarita a margarita. (The name is Spanish for “Daisy,” a daisy being an old category of cocktail that typically includes curaçao or grenadine.) He replaced it with agave syrup—not sugar, but syrup made from the same plant that pro­duces tequila.

Bermejo’s rationale behind all this was to place tequila, good tequila, on a pedestal so drinkers might better admire its fine char­ acter. He knew that was never going to a happen if he served cheap mixto smothered in sour mix and orange liqueur. The drink he served—the one that eventually became known and served the world over as Tommy’s Margarita (page 119)—was essentially a tequila sour. But it was Tequila with a capital T.

Young bartenders took note. Soon, Tommy’s Mexican Restaurant became one of the early agoras for thoughtful young mixologists looking to improve their lot and their cocktails. One of those bartenders was a South African named Jacques Bezuidenhout. He worked with Bermejo at the short­lived San Francisco agave bar Tres Agaves and there came up with La Perla, a daring mixture of reposado tequila, manzanilla sherry, and pear liqueur. The drink was revolutionary for 2005, ahead of its time. But its time was soon to come.

Bermejo’s counterpart in Europe was a former high school teacher from Los Angeles named Tomas Estes. Estes found his place in the world selling Mexican food and tequila, first in Amsterdam and then in London, where he opened Café Pacifico in 1982. Estes kept a goodly selection of tequilas behind the bar. But, really, at that time, any selection of tequilas would have made an impression on Londoners and London bartenders, who knew little about the spirit. Noteworthy, too, were his margaritas, which used 100 percent agave tequila, good triple sec, and freshly squeezed lime juice. Even Dick Bradsell, then Britain’s preeminent cocktail bartender, was impressed. Estes went on to a career as tequila evangelist, conducting seminars and classes and writing articles about his favorite spirit. Eventually, in 2008, he collaborated on his own brand, Tequila Ocho.

Another early player helping to move the needle in the agave renaissance was David Suro. Suro was born in the heart of tequila country, in Guadalajara. Marriage brought him to Philadelphia, where he got a job at a Mexican restaurant in the city’s downtown. Dismayed by what passed for Mexican food and drink in the States, he bought out the owners in 1986 at the tender age of twenty­four and changed the name of the restaurant to Tequilas. The name made sense to him.

“Tequila means ‘place of work,’ ” he said. “I found that very appropriate. I was going to be working my butt off for years, long days. But the name was a big challenge in 1986. People don’t trust a place called Tequilas. They think there will be trouble. It was a battle with the community to try to tell them that there is nothing wrong with that name, that there is a lot of history and culture behind it.”

That battle of perception became his cause. Every day, he labored to change the public’s understanding of tequila. He fought against the clichés perpetuated by the big tequila companies—the silly, dissolute world of the shot glass; the salt; the lime; the kitschy pop hit “Tequila” by the Champs. “For us to walk through one thou­sand years of history in the relationship between man and plant and distill that into a drop of stereotypes, into a drop of nonsense,” Suro continued, “I didn’t want to do that.”

Suro’s advocacy over the decades has taken many forms, from Siembra Azul, his line of 100 percent agave tequilas, to the end­less series of seminars he conducts, expanding consumer knowledge of agave spirits, to the many trips to Jalisco and Oaxaca he has hosted, introducing bartenders and other liquor professionals to the artisans and traditions behind the bottles they enjoy. He even created Siembra Valles Ancestral, his recent attempt at a tequila as it might have been made a century ago, before international success forever altered pro­duction methods.

Bermejo, Estes, and Suro were all advocates of enjoying agave spirits on their own. But the bartenders they were connecting with were members of the growing cocktail revival, which was, by the turn of the current century, beginning to gird the globe. These cocktail evangelists had other ideas. And so, as tequila and mezcal were rapidly being rediscovered by audiences the world over, the spirits were more often than not found at the bottom of a cocktail glass, mingling with other friendly liquids.

ROBERT SIMONSON writes about cocktails, spirits, bars, and bartenders for the New York Times. He is also contributing editor and columnist at PUNCH. His books include The Old-Fashioned (2014), A Proper Drink (2016) and 3-Ingredient Cocktails (2017), which was nominated for a 2018 James Beard Award. He was also a primary contributor to The Essential New York Times Book of Cocktails (2015). Simonson won the 2019 Spirited Award for Best Cocktail and Spirits Writer, and his work, which has also appeared in Saveur, Bon Appetit, Food & Wine, New York magazine, and Lucky Peach, has been nominated for a total of eleven Spirited Awards and two IACP Awards. A native of Wisconsin, he lives in Brooklyn. 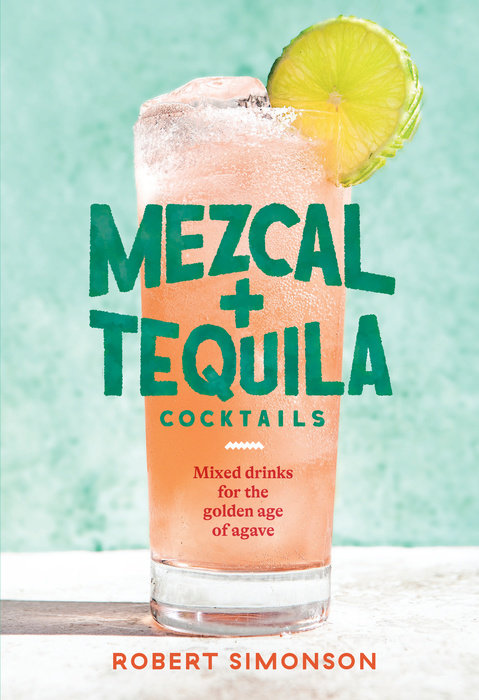