LONGLISTED FOR THE NATIONAL BOOK AWARD • “This exquisite debut wrestles with gender, siblinghood, family, and what it means to be Muslim in America—all through the lens of love.”—Time

“Haunting . . .  a knife-sharp story of self-discovery.”—People

ONE OF THE BEST BOOKS OF THE YEAR: The New Yorker, NPR, Time, Vox, PopSugar, Autostraddle

In this heartrending, lyrical debut work of fiction, the acclaimed author of If They Come for Us traces the intense bond of three orphaned siblings who, after their parents die, are left to raise one another. The youngest, Kausar, grapples with the incomprehensible loss of their parents as she also charts out her own understanding of gender; Aisha, the middle sister, spars with her “crybaby” younger sibling as she desperately tries to hold on to her sense of family in an impossible situation; and Noreen, the eldest, does her best in the role of sister-mother while also trying to create a life for herself, on her own terms.

As Kausar grows up, she must contend with the collision of her private and public worlds, and choose whether to remain in the life of love, sorrow, and codependency that she’s known or carve out a new path for herself. When We Were Sisters tenderly examines the bonds and fractures of sisterhood, names the perils of being three Muslim American girls alone against the world, and ultimately illustrates how those who’ve lost everything might still make homes in one another.

An excerpt from When We Were Sisters

In a city, a man dies and all the Aunties who Aunty the neighborhood reach towards their phones. Their brown fingers cradle porcelain, the news spreading fast and careless as a common cold. Ring! [   ] is dead. Ring! Inna lillahi wa inna ilayhi raji’un. Ring! How sad. Ring! Only a few years after his wife. Ring! And his daughters? Ring! Three of them, yes. Ring! Alive. Ring! Ya Allah. Ring! [   ] is dead.

In a city, a man dies. In a suburb of a different state, the man’s brother-in-law celebrates by adding an extension to his family’s house. A new deck spills out into their backyard. The man’s brother-in-law renovates the basement: old moldy carpet pulled up and Moroccan marble tiles put in its place. The brother-in-law pores over them at the Home Depot, comparing prices, how happy it will make his wife, white, who he married when he first came to America. A gorra? his mom asked, the brown women in his family looking at each other, confused. She found Islam because of me! he explained, exacerbated, not understanding why people couldn’t see how he was going to earn extra points to heaven, his love enough to make someone convert. You went to America and fell out of love with us, his mom sighed, dramatic, as usual.

But brown women were so plentiful. He knew he could have them. White women found every simple thing he did exciting. It opened him. The lota in the bathroom, a marvel. Basic fruit chaat, the spiciest thing they’d ever tasted. How interesting he could become. A gorra? his cousins in Pakistan echoed in disbelief, some whispering mashallah as others turned away from him. Yes, a gorra. His gorra, her slender nose, all her features pulled towards it, her voice fast like lightning. When they first married, she’d take him around to her American friends. Him: so exotic and fun. They had two sons: brown, but fair. For a while it was good. Or maybe never fully good, but bearable. But when the quiet arrived it stayed. Rooted into his bones. The coldness between them, rattling his chest on every inhale. He still gets to see his sons on weekends, lives in an apartment on his own. Her American friends, their selfishness, filling her head with ideas of a divorce.

All the things he’s done to keep her from saying it a third time. Divorce. Ya Allah, what people would think. Divorce. He can’t even bring himself to think it a third time in a row. So American it bursts his skin to hives, so American it bows his head when he walks by the Pakistani men at the masjid who mutter about his failed business practices: the roofing scheme he tried to start, the gardening venture, the haraam liquor store. His failure is a reputation that clings to him. That clings to his wife. That clings to his sons. Even when he boasted about the great family he comes from. What they were back in Pakistan. Their name, their honor, what they contributed. People would be polite, they listened and nodded. Then they got tired. They would look away. If only he could make more money. Maybe he could see his sons more. Maybe he could see her more. Maybe she’d walk next to him as he entered the masjid.

When his little sister was alive, when they were kids, she looked at him like he could do no wrong. Her eyes big and full of wonder. Bhai. No one else had ever looked at him like that. She grew up and got married, had kids, made her own life. And then she stopped looking at him that way. When she died he buried the pain deep in his stomach. Tried to convince his sons to love him while their mom called him a useless sack of shit behind his back.

It’s not until his sister’s husband dies that his stomach begins to bubble. He realizes how much he’s missed that look from when they were kids, how she was the only one who believed he could do anything. How much he missed someone believing that about him. How, through her eyes, he believed it too.

It’s sad business, his nieces orphaned a few states away. Sad business, their girlness. Sad business there was no boy among them. Sad business his wife can barely muster an Inna lillahi for. Sad business she doesn’t think about as she combs the hair of her two sons, getting them ready for school. Sad business, their dead dad’s money up for grabs, the promise of a government check following the orphans until they turn eighteen: 161 checks that could come through for the youngest, 139 for the middle, 120 for the eldest—420 checks total, if they survive.

I don’t want them staying with me, his wife says, lounging on the couch. One of their sons is upstairs coloring, the other son beside her watching TV, absorbed in a show where a badly drawn white boy with a large nose, three strands of hair, and an oversized green sweater vest is supposed to be eleven years old. Her two sons are in private school. Her manicured lawn. The Tupperware meal plans for all of them stacked in her fridge. Everything so orderly. Neat and separate—a blessing. Her failure husband is in his own apartment, away from them except for weekends.

When she met him in college, he was brimming with potential. All her friends said he’d make a lot of money. Be an entrepreneur. She loved the stories he would tell; of places she’d never been. How close his skin felt to everything, like he was part of the world and not outside of it. His deep belly laugh, full of fireflies.

It was a gamble, sure, marrying a brown man. But it made her edgy, something she never had been before. She always felt so outside of everything. Like she couldn’t even feel the grass under her feet. And then he came, so eager. Her veins started to open. She could feel more, the sun on her arms. His fingers, blending into the soil. A gamble. Even when she stood in front of the Imam, reciting there is no God but Allah, removed like she was observing herself, her eyes wandering to the different faces of the men in the mosque, wondering what her life would have been like if she’d met any one of them first. Here, people adored her. They welcomed her, doted on her even. The more she felt how easy it was to be adored, the more her husband’s need disturbed her. The more space she wanted. Separate, clean and distinct, a fence around her. And then his mom died. And his sister. Death, how cold it made him. She never fully understood that coldness, both her parents still alive, but so separate from her. He started to become that too: separate. No longer the man that was part of the world, the man she fell in love with, the man she used to envy. He became fenced, lining the walls of his own apartment with boxes like he was cushioning himself against destruction. So no one could get to him. But she could care less, loving how foreign she felt in this new community, how exotic. Her own parents, flabbergasted by her decision. But she had wanted to leave them as soon as she had left for college. Promised herself she would never go back. And now, here she was, in her own house, with her own kids. Her pristine little life. The one she had to claw out for herself. The three orphans, threatening to dirty it.

It’ll be like they never existed, the Uncle says, sweaty, as though it’s his body placing the marble tiles on the floor, as though he’s lifted a finger.

Fatimah Asghar, author of If They Come for Us, is a poet, filmmaker, educator, and performer. She is the writer and co-creator of Brown Girls, an Emmy-nominated web series that highlights friendships between women of color. Along with Safia Elhillo, she is the editor of Halal If You Hear Me, an anthology that celebrates Muslim writers who are also women, queer, gender-nonconforming, and/or trans. 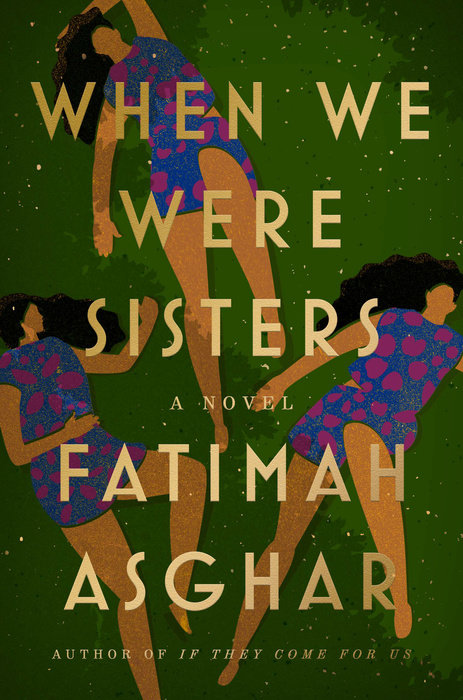